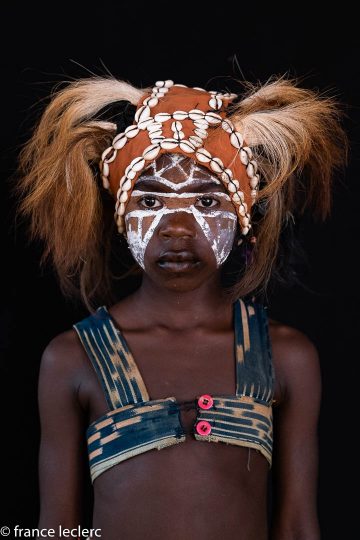 As I said in my last story (La Côte d’Ivoire, where masks are celebrated), the cultural traditions in Ivory Coast are alive and well.  The Zaouli, Goli, and Boloye dances described in that last post are famous and thrilling to watch.  There are other ritual dances, not as well known, that I am sharing here.  Some are intriguing, others are a bit unnerving, but all are captivating!

Attending some of these dances also allowed me to discover a beautiful musical instrument, the balafon, a xylophone-like instrument with keys sitting on calabashes of increasing sizes.  Though one can see and hear the balafon in many settings, including church services, I first listened to its distinctive sound in a village square near Khorogo, in the northern part of the country.  There, a group of men from the Senufo ethnic group was playing strange-looking drums and balafons.  Women and children also came to the village square and danced forever in a circle, seemingly delighted by these local rhythms.

The northern Ivory Coast is also home to the Ngoro Dance.  Roughly translated as the dance of the Virgins, the Ngoro Dance is a women’s ritual celebrated when girls return from the forest.  As a rite of passage, young girls have to spend time in sacred secluded groves to learn the Senufo social and religious secrets (men have their own rite of passage as well.)

There were many elements to this dance.  First, a leader of a sort, the féticheur, appeared.  He was bare-chested, wearing heavy leather pants, and very skillful at loudly cracking a whip (every time he did so, I was expecting to feel a sharp pain or to see blood coming out from a lash in my skin as it felt so close to me, but fortunately, no harm was done.) Then young men, also bare-chested and wearing a straw hat and white pants decorated with colored tassels joined in.  They danced in a circle, with quick steps, around a wildfire while drums and balafon players generated appropriate rhythms.  Finally, the beautiful young “virgins” joined in, naked from the waist up, with a pompom of native grass adorning their back and carrying “bunches” of white straw.  They danced in a circle inside the men’s rings but at a slower, more graceful pace.  Toward the end, the whip-cracking féticheur danced in the fire and sat on live embers (thus the leather pants), dragging himself to the ground, and extinguishing the fire.

A small group of Dozo elders had shown up to see the dance.  Dozos are groups of men, a fraternity of sort, who wander the forests dressed in brown mud cloth.  They also wear a distinctive hat and a series of protective amulets which are said to make them bullet-proof.

Another traditional dance from the northern part of the Ivory Coast involved a stilt dancer.  Known for speaking in a shrill language of tongues that is incomprehensible to outsiders, the stilt dancer was quite impressive (and tall!!!).  However, the most notable part of this traditional dance for me was the group of women that came and sang before the masked stilt dancer joined in.  All dressed in white (for purity) and indigo (for self-respect), young women first sang about married life and were then joined by older women.

Undoubtedly, the most unsettling dance for me was the Danse of the Jongleurs (Dance of the Jugglers) performed by people from the Yacouba ethnic group in the Man region of the western Ivory Coast.  Watching a juggler one might expect balls or pins to be tossed into the air, but here it was young girls in a trance with their faces painted in white kaolin (a type of clay) that were being juggled. They were thrown into the air, twirled around, and caught (hopefully) without harm.  I have to admit that though I want to be respectful of cultural traditions, I felt quite uneasy watching this performance.  (Then again, I am also not a fan of the tumbling performances of cheerleading squads in the U.S., so maybe it is me.) The only thing that made it a little better afterward was learning that the traditional way of performing the dance was to catch the girls while holding daggers which thankfully I am told they don’t do anymore.

Performed in the same village was the “gle” dance, “gle” literally translates as masks.  Wearers of these spectacular masks are believed to be able to communicate with the spirits (some argue that the spirits possess them).  There is a large variety of ‘gle” that are called upon to perform depending on the needs of the community.  Some entertain, others frighten, others solve conflict; with each “gle” having its own personality, preferences, dance, and speech patterns.  The masked “gle” wears a heavy full-body costume constructed of raffia, feathers, and fur.  A “gle” is believed to be highly unpredictable, so an attendant always accompanies the masquerader to control it.

Finally, in the Akan ethnic group, a predominant group in the eastern Ivory Coast, chosen women (and a few men) can be trained as Komians or priestesses, traditional healers of some sort.  They become fluent with medicinal plants and are thought to have the power to create spells and predict the future.  Komians are asked to perform a ritual for a large variety of purposes, from the enthronement of tribal chiefs to settlement of family disputes or addressing health issues.

The Komian ritual greatly appealed to me as some elements of it reminded me of the Voodoo ceremonies I had seen in Benin (Voodoo without Dolls).  The word “Komian” translates as trance, and as part of the ritual, the priestesses perform a dance to the rhythms of tam-tams until they reach the trance status.  They do so while wearing a red cap decorated with shells, a colorful (or white) skirt, and a string of bells.   But first, for purification, they cover their bodies with kaolin.

And of course, even though I was able to witness numerous dances and rituals, much of the meanings of these rituals still elude me.  And many more ceremonies are not for the eyes of foreigners, performed only for the initiated ones.  With a quarter of its population practicing animistic religions, La Côte d’Ivoire has a lot more secrets to discover.