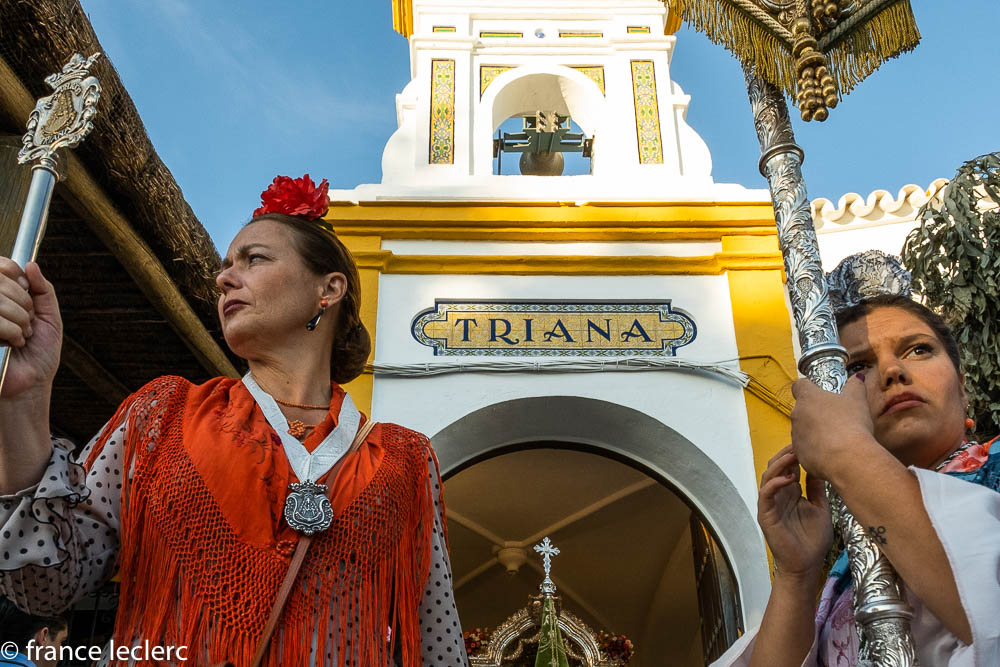 After a week of intensive horse sightings in Appleby (ApplebyHorseFair), I was certainly not expecting to see horses again so soon, and certainly not so many, in my time in Southern Spain.  But spending a few days in El Rocío for the Romerí­a, a Roman Catholic pilgrimage, surprisingly meant being back amongst horses, and also bulls!

El Rocí­o is a small town in the countryside of Andalusia which is home to the “Virgen del Rocí­o”, a wooden Madonna richly ornate who normally can be found near the altar of the town’s beautiful church.  The Romerí­a del Rocí­o is a pilgrimage in honor of the Virgin, a tradition that started in the thirteen century when a hunter found a statue of the Virgin Mary in a tree trunk nearby.  Though it started as a strictly local affair, the Romerí­a (the term Romerí­a comes from Romero, meaning a person traveling to Rome.) now attracts roughly a million pilgrims each year on Pentecost Sunday. Coming from Spain and beyond, a large number of the pilgrims travel to El Rocí­o, either on foot, on horseback or in horse-drawn carriages, generally sleeping outdoors.  For many, the journey is the most important part of the pilgrimage.  For the occasion, many of the pilgrims wear traditional Andalusian costumes, the men wear short jackets, tight pants suitable for riding, and a broad-brimmed Andalusian hat.  Women either wear a Flamenca costume with their hair adorned with flowers or a more convenient riding costume.

When we arrived in El Rocí­o, the Romerí­a is already in full swing.  It is quite a scene with quaint buildings, sand-covered streets, and the traditionally dressed locals on horses (including women riding sidesaddle) or in horse-carriages.  It feels as though one has been transported to another era (or at least to the middle of a Western movie set).

Praying to the Virgin and lighting candles or going to confession are popular activities during the Romerí­a (not to mention dancing, singing, and souvenir shopping).  But the pilgrimage also follows an elaborate choreography that everybody seems to be aware of (except newcomers like me, of course).  Many of the pilgrims travel with their “fraternity” or “brotherhoods” (there are over 150 such groups) who own or rent the equivalent of a “frat house” in El Rocí­o.  Every fraternity has its own silver-thread-embroidered emblem (Simpecado) with an image of the Virgin at the center. Except when they carry it around town like a flag for others to see, the Simpecado travels in its own decorated chariot, pulled by oxen and it accompanies the pilgrims on their journeys.

On the first day, the emblems are presented to the Virgin in the church one after the other starting with the oldest ‘fraternity”.   During the second night, sometime after midnight the Virgin is taken out of the church and carried into the streets of the village.  There, what feels like a sea of people (mostly men) are trying to touch her, and emotions are high.  The Virgin is out until morning and acknowledges every fraternity, one after the other, while the priest representing the fraternity prays to her directly.  When she is done, the Virgin goes back to the church for another year.

The next day the journey home begins. But not before a final goodbye to the Virgin with each fraternity one by one getting blessed in the church before departing while the decorated chariots are waiting outside the church.  On the way home, a small river has to be crossed near a small shrine to the Virgin. Once again, every fraternity, with its chariots, bulls, and horses, stops and sings a last hymn before the final home departure.