King Penguins in South Georgia, as British as Can Be! 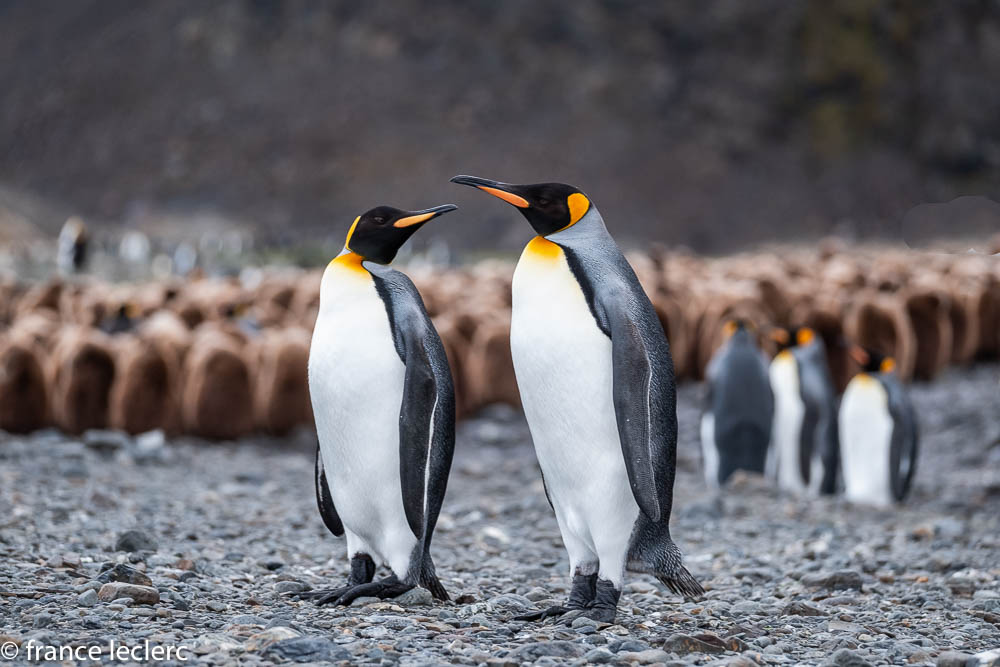 If you have read this blog before, you know that the focus of my photography is people, as opposed to wildlife or landscapes.  Don’t get me wrong, I love animals and fully enjoy nature’s beauty but I typically do not feel compelled to photograph it (probably because I don’t really know how and I am not patient enough).

Anyhow, I am just back from a trip to South Georgia and Antarctica where there are basically NO people (apologies to the 16 people who live in South Georgia and to the scientists in Antarctica but you just don’t count), just wildlife and landscape.  So, for the holiday seasons, I will share a few of the amazing wintry scenes I experienced on the frozen continent.

The first part of this journey (other than the unending days at sea to get there) was South Georgia, a British Overseas Territory.  An island about 100 miles long and 20 miles wide at its largest point, it has been described as remote and inhospitable, a description that is hard to disagree with.  South Georgia had been a base for whaling until whaling ended in the 1960s.  Now the only sign of human life (past and present) is a small settlement called Grytviken, where a tiny museum, a church, and a postal station share the space with the rusty remains of whale oil processing plants and abandoned whaling ships. (It is also the final resting place of Ernest Shackleton).

Everything else in South Georgia seems to belong to the seals and the penguins (and more seabirds species than I can possibly keep track of).  The primary species of penguins on the island are the king penguins, a large species about 3 feet tall, second only to the emperor penguins in size.  As South Georgia is home to some of the largest colonies of king penguins, it seems reasonable to think of them as British penguins (and shouldn’t the females be called queen penguins?)  There is actually something British about the king penguins: they are upright and dignified like a court butler, and to me, they look quite a bit more formal than other species like the always smiling chinstrap penguins found in Antarctica. I wonder how they voted on Brexit.

But, before we explore the penguins, there should certainly be a mention of the seals, as South Georgia is a well-known breeding area for the Southern Elephant seals.  Southern elephant seals are the largest of all seals (and the ugliest but don’t tell them I said so, as they are enormous).  Males can be over 20 feet long and weigh up to 8,800 pounds. They actually take their name from their trunk-like snouts, although it just as aptly applies to their size.  South Georgia is also home to fur seals which are a less daunting size.  We were told to keep our distance from the seals, as they can be aggressive, particularly during the mating period.  Quite frankly, they mostly look like huge rocks on the beach and I had to work hard to capture (I mean images of course) a few showing any sign of life such as open eyes, a yawn, or a warning to other seals encroaching their space.  The only time I saw elephant seals remotely awake was when mating, which is somewhat distressing to watch as the bull (adult male) can be 10 times as large as the female.  I am guessing the males rarely take no for an answer. 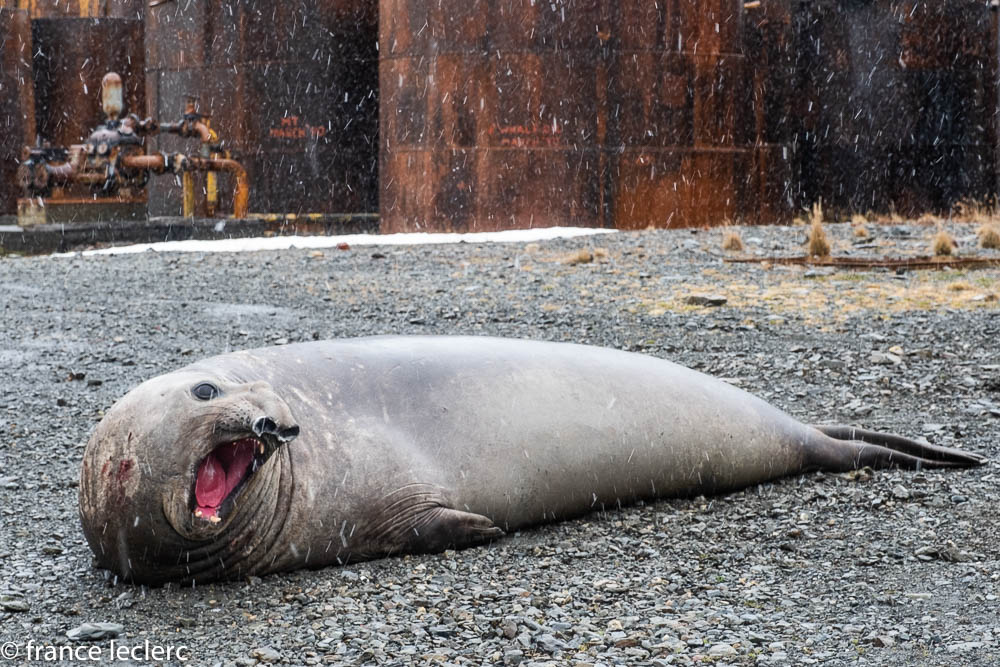 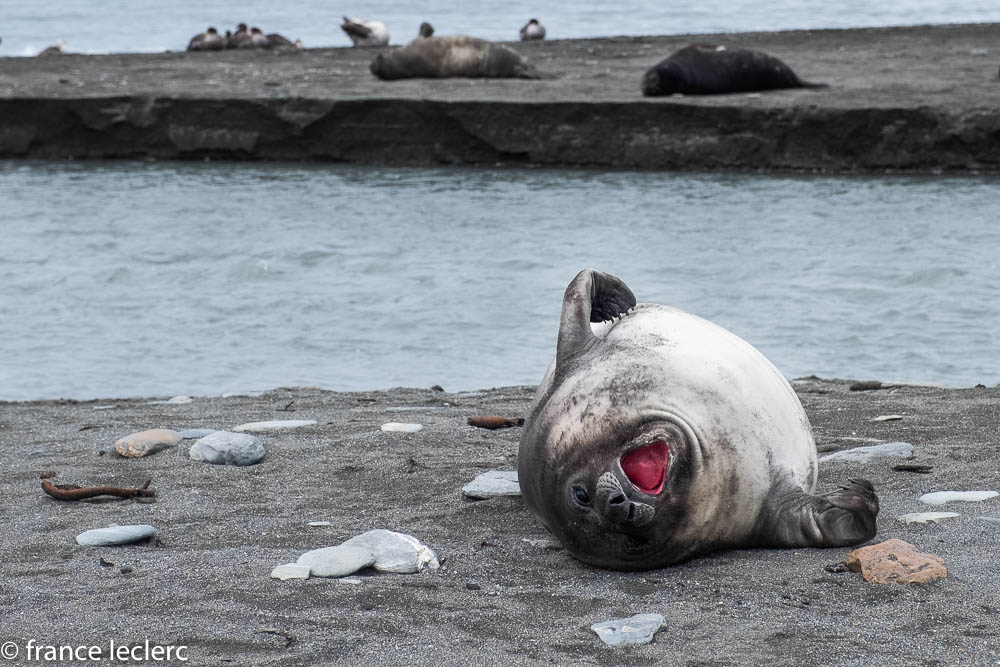 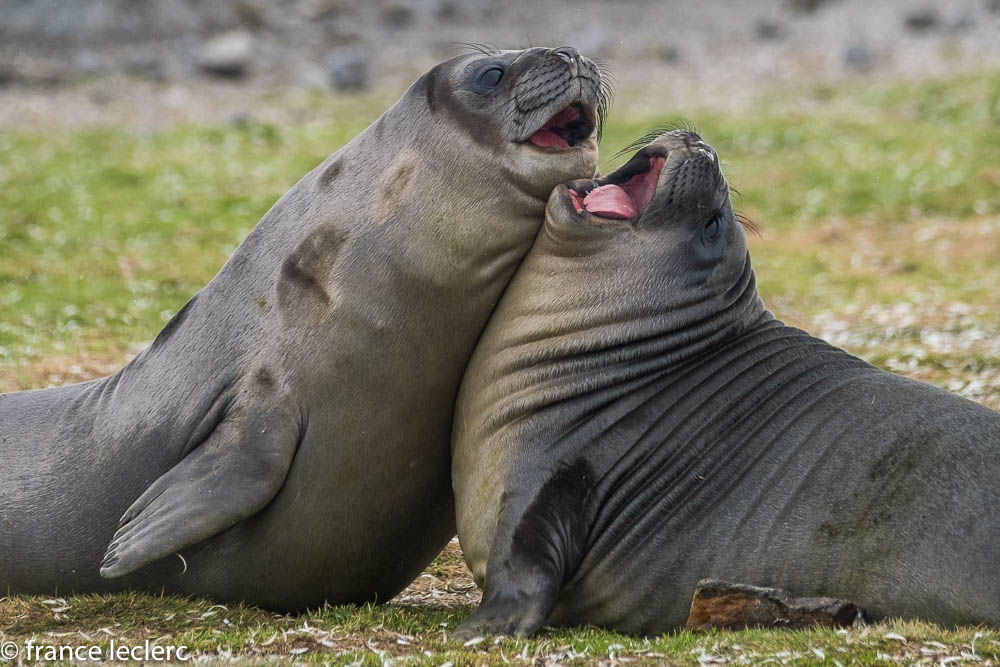 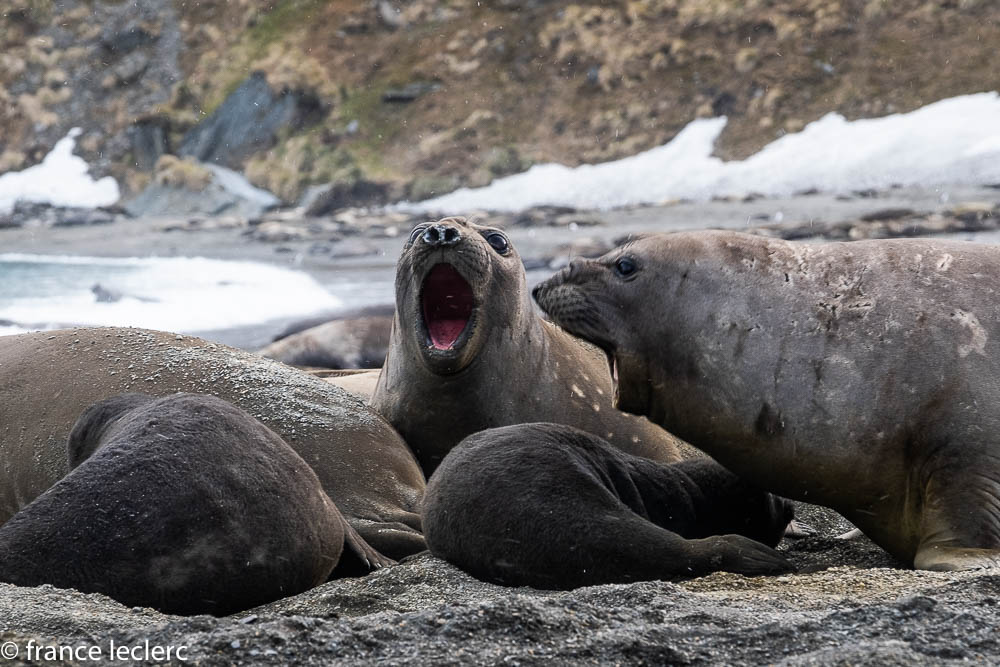 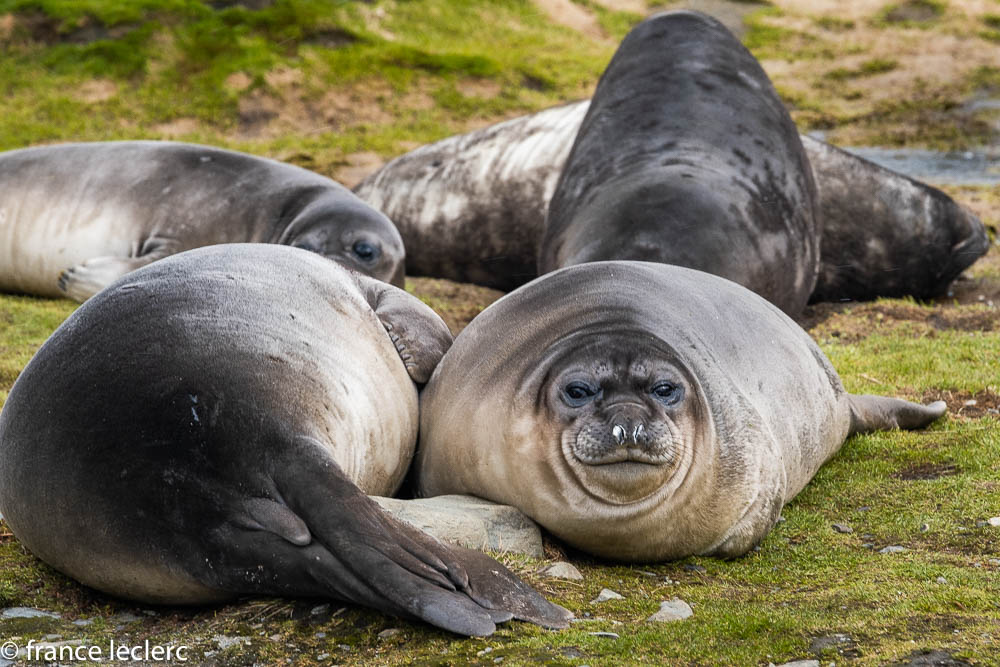 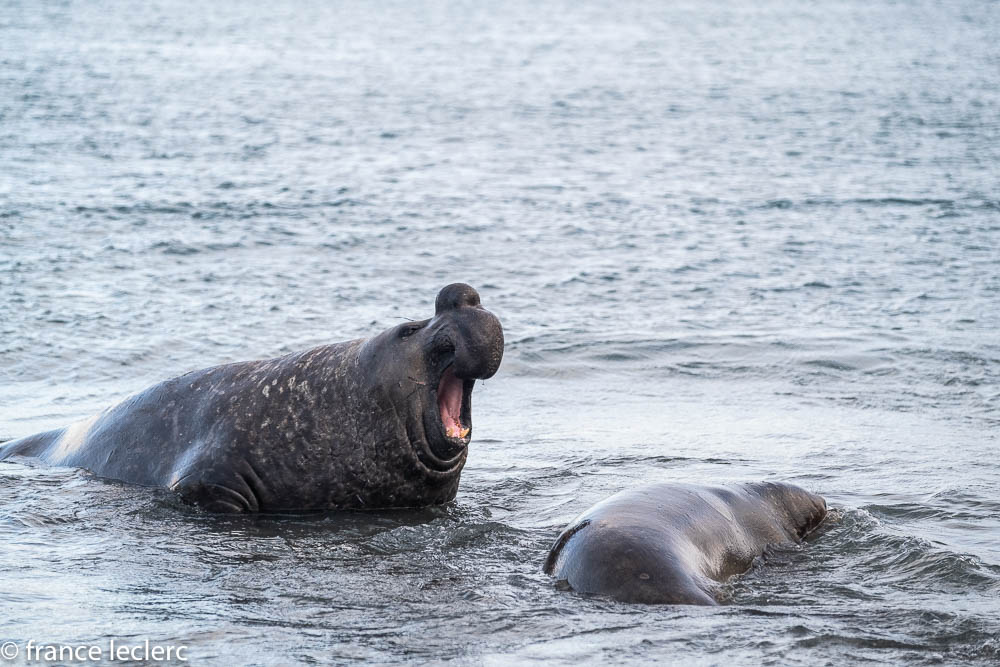 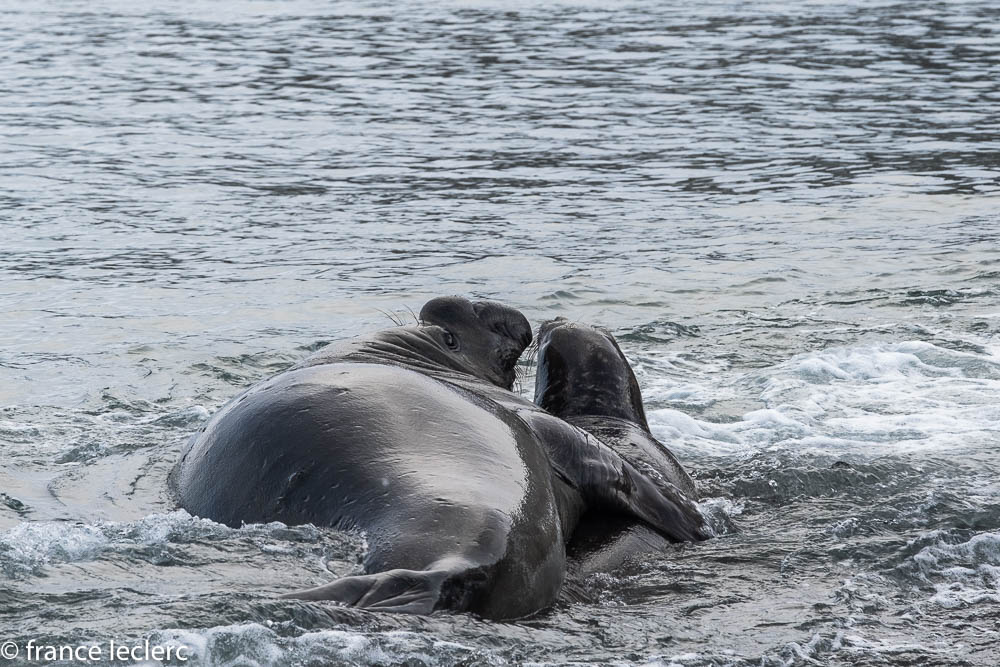 But back to the stars of the show, the king penguins who live in large breeding colonies. The two colonies we visited were estimated to have 100,000 pairs of penguins each.  The breeding cycle is very long, taking around 14-16 months from laying to offspring fledging so colonies are continuously occupied year-round with both adult birds and chicks.

I quite enjoyed photographing the penguins, probably because they behave a lot like people.  We were told that we should not be in the penguins’ paths as this is their land (fair enough except for British citizens) and if they come our way to just stop and let them through.  Well, the penguins do not necessarily agree with these rules.  Time and time again, they would get near me, stop and stare at me with an inquisitive look which seemed to be asking: “what exactly are you doing here, and why are you wearing a gigantic red parka?  Don’t you know this event is black tie?” And, of course, the most curious ones were the chicks, a few of whom would gladly push you or your bag with the tip of their beaks testing to see if they could get any reaction.

Speaking of chicks, the king penguins chicks are the strangest looking things.  Fluffy and brown, they are almost as tall as the adult ones, looking like they could be a species of their own. The chicks cannot go into the water to fish until they lose their fluffy down so they rely on their parents to feed them. The king penguins feed their chicks by eating fish, digesting it slightly, and regurgitating the food into the chick’s mouth, yum! The chicks form a group and sensibly huddle with other chicks (called a crèche) to stay warm. There were times when I would not have minded joining the crèche, even when wearing my gigantic parka.

For more evidence of how considerate the king penguins are, before mating, the adults have to lose their old feathers and have them replaced by new ones.  And like the juveniles, adults cannot fish for food until they have a new fully intact, and functioning set of feathers, so this molting period is one of starvation while living on food reserves.  In other words, before dating, they need a new wardrobe and a slimmer body to be at their best.  Sounds familiar. 🙂 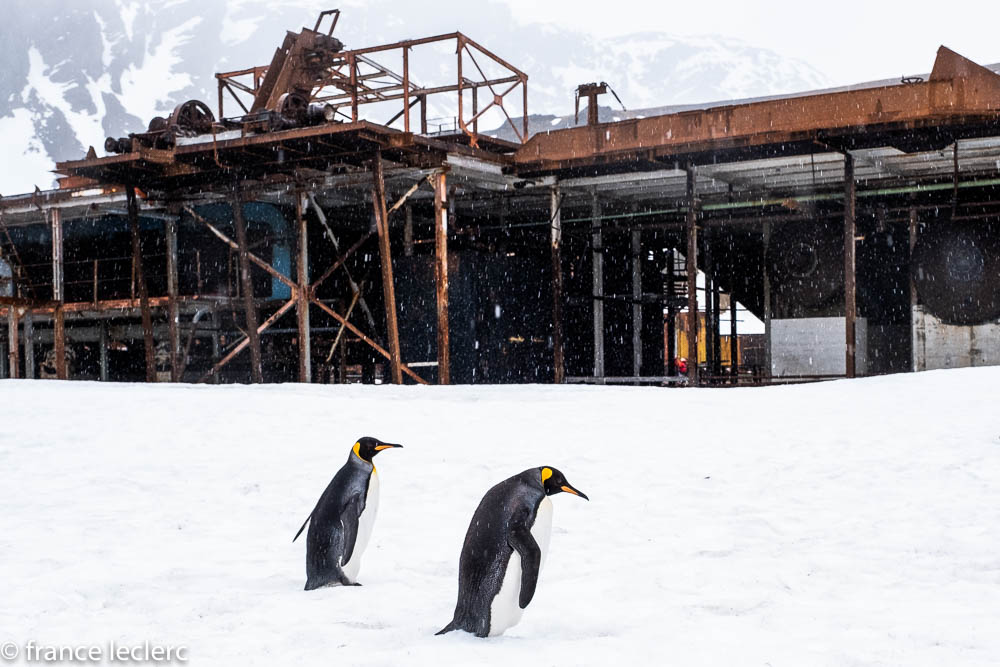 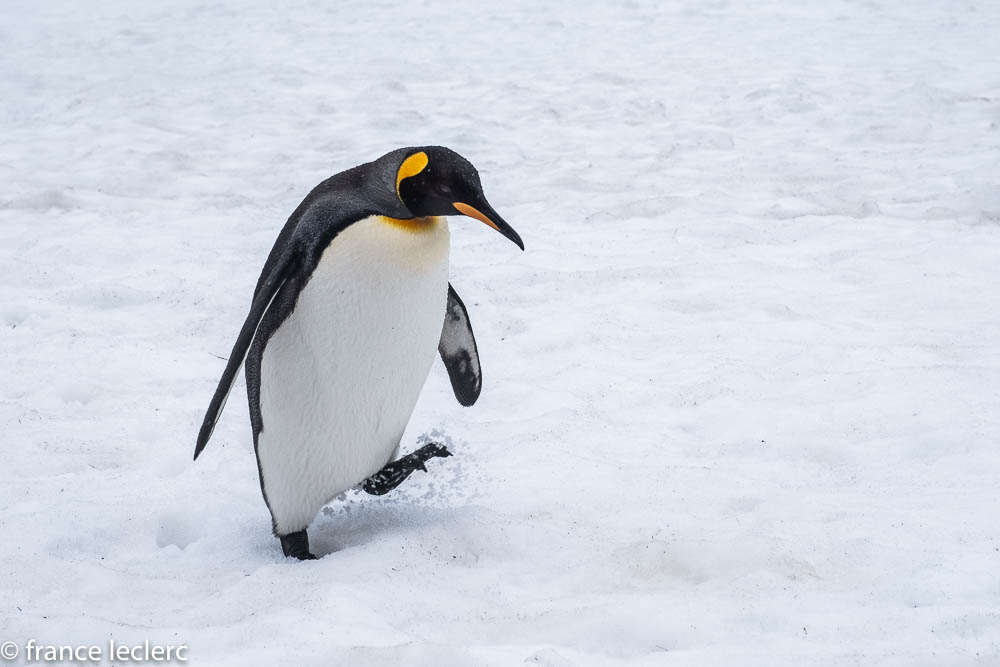 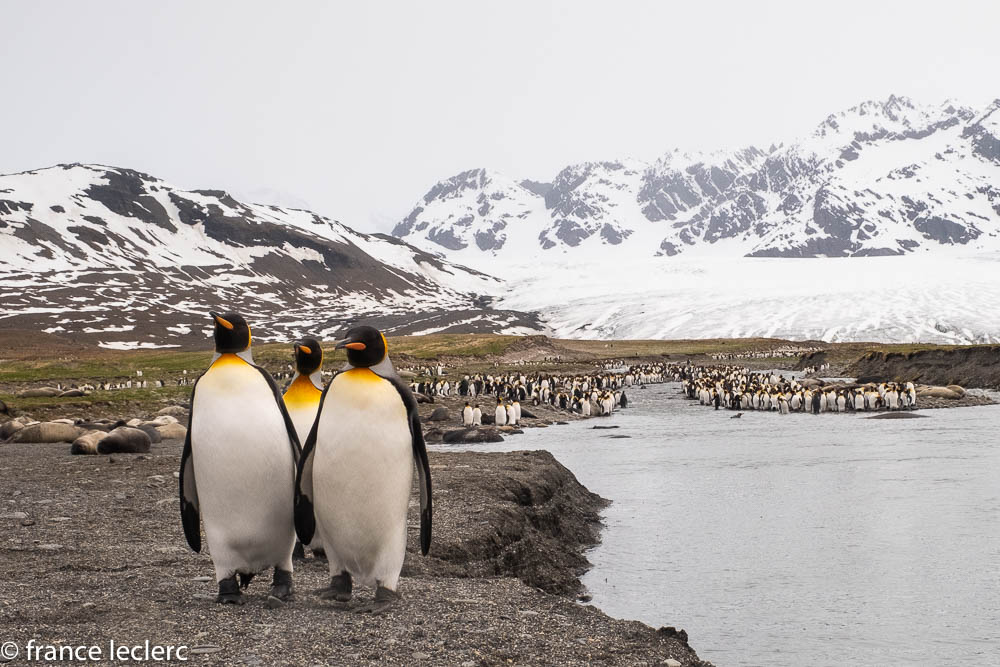 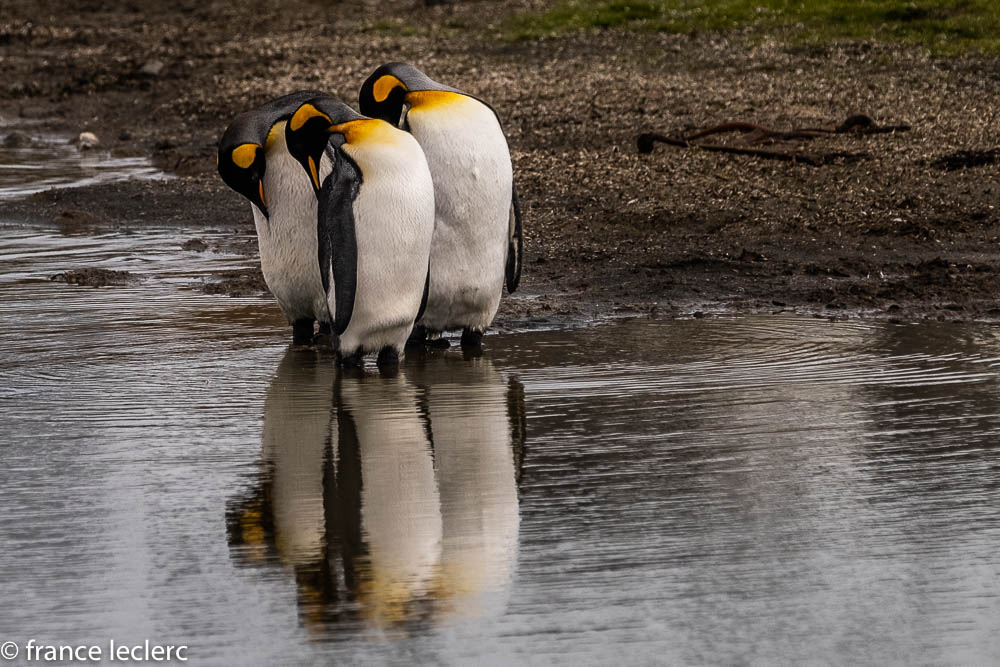 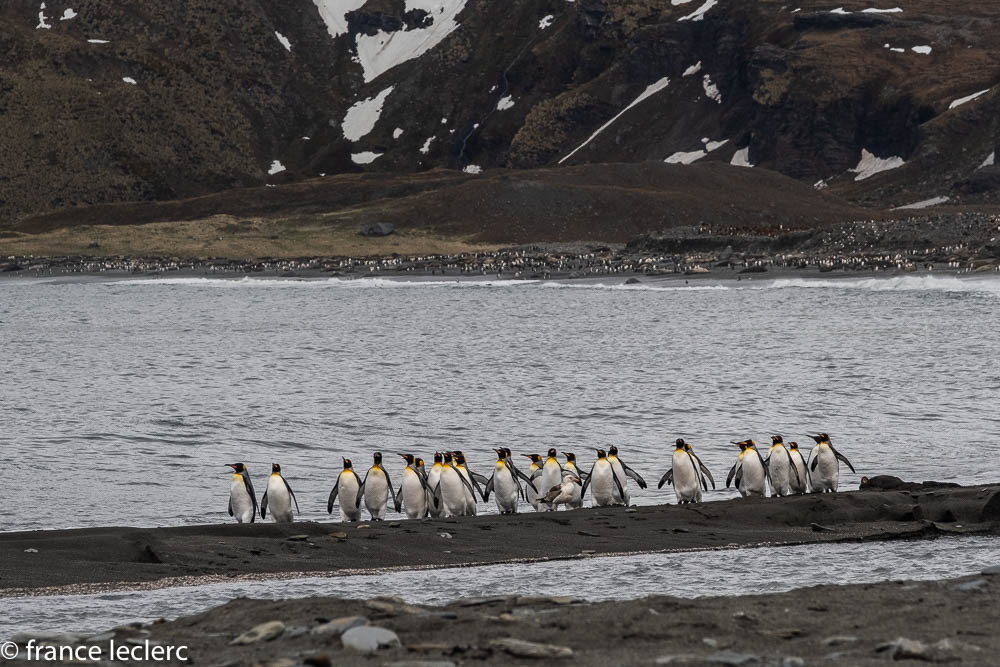 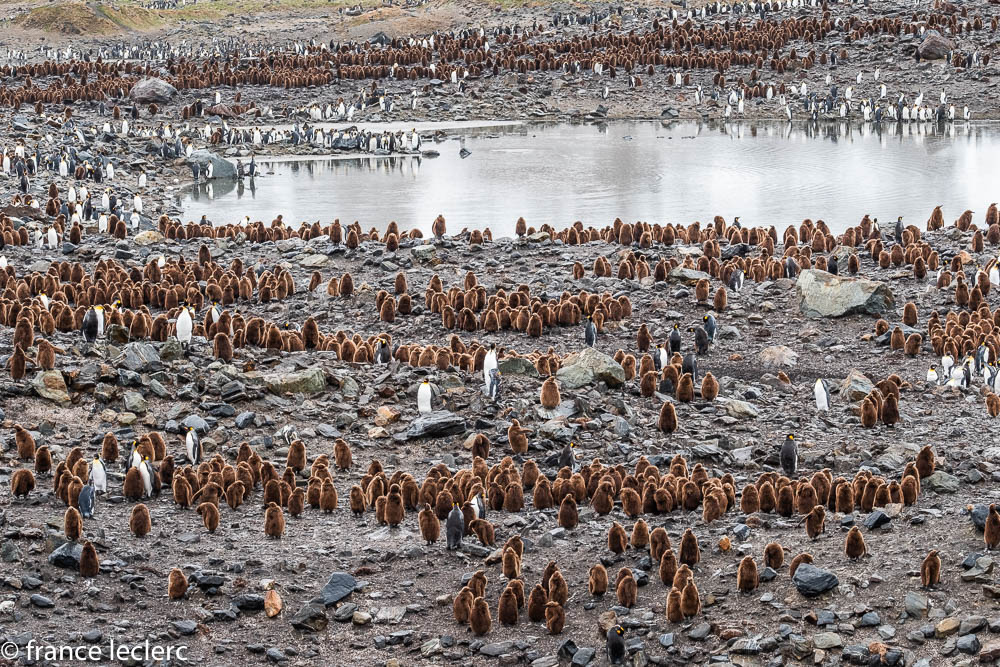 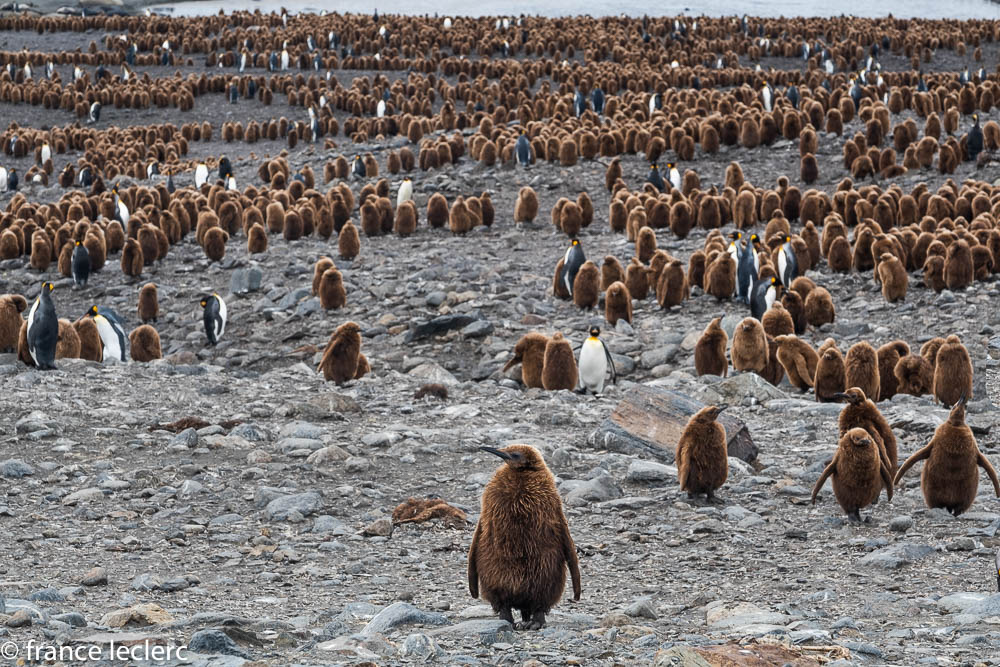 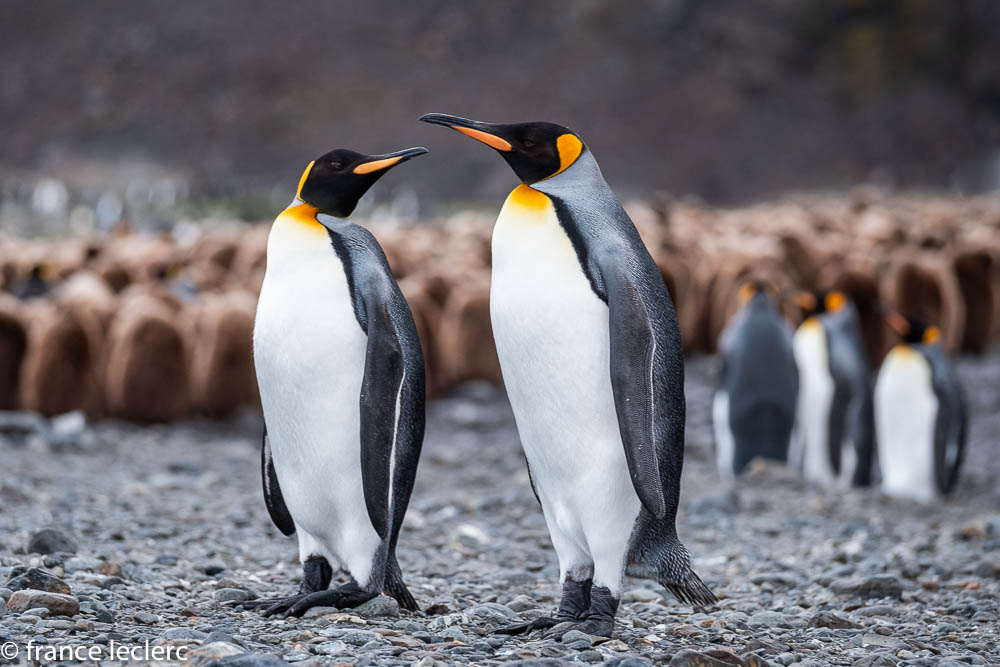 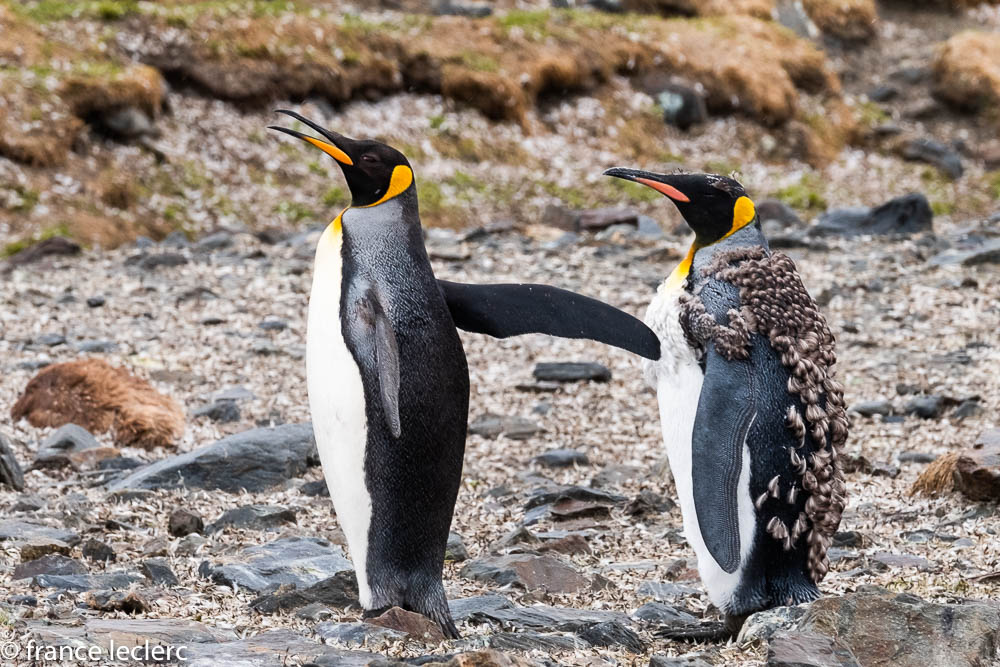 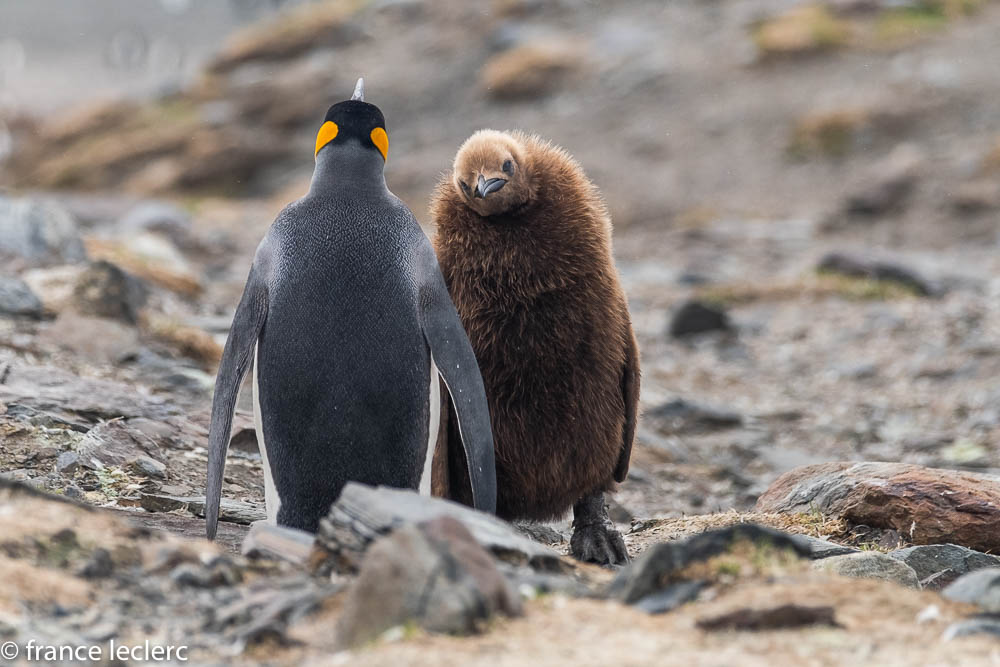 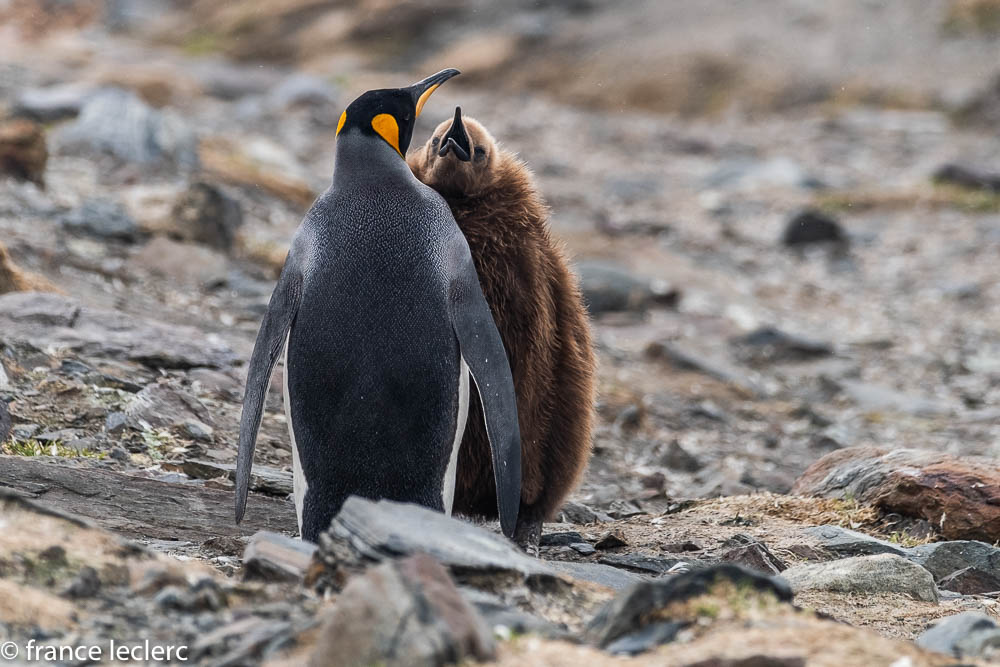 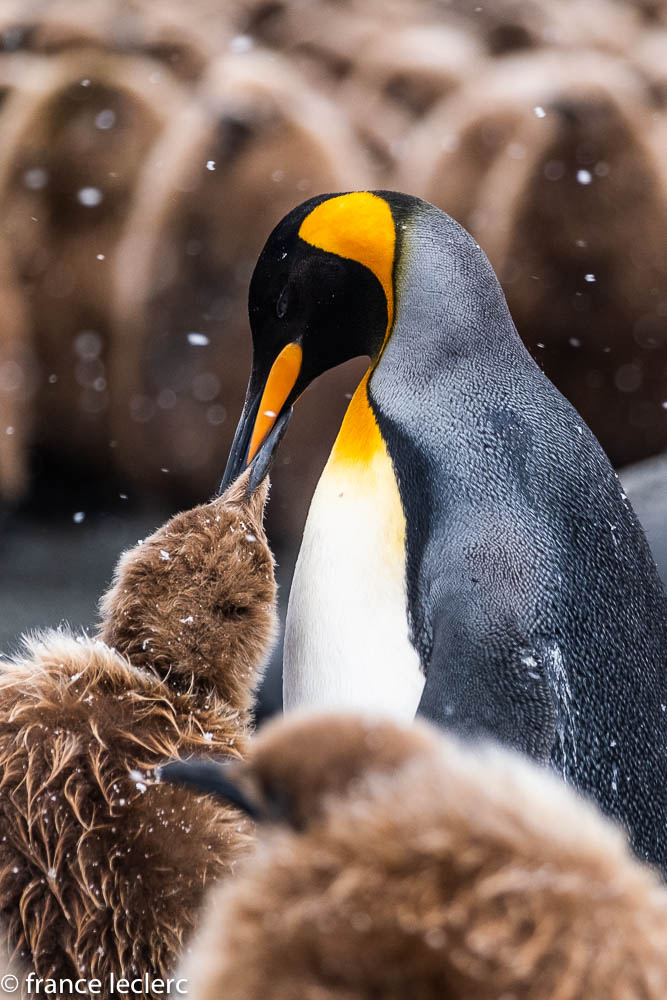 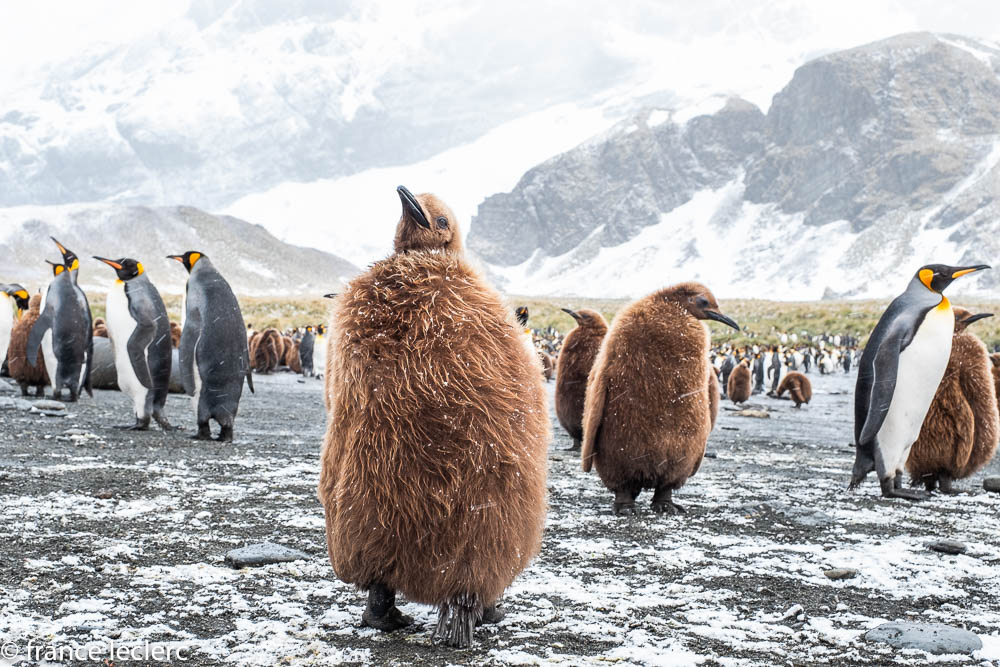 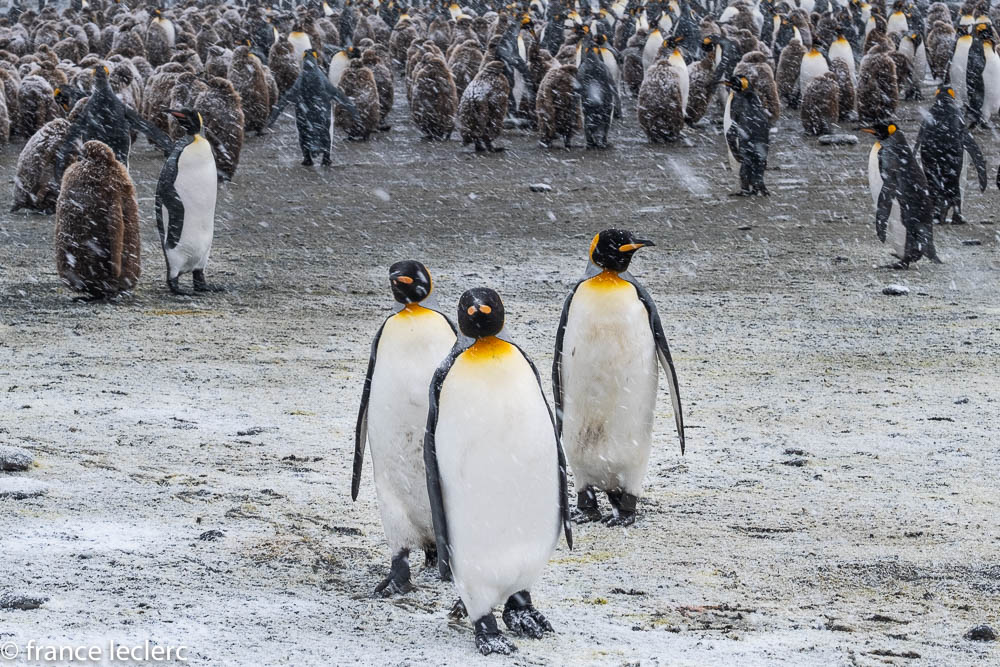 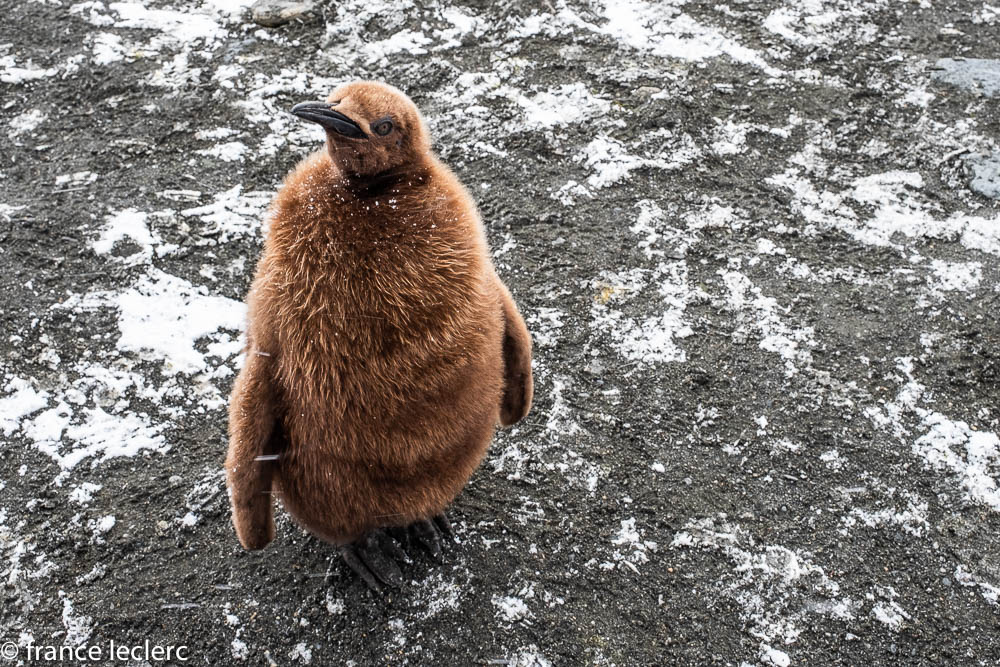 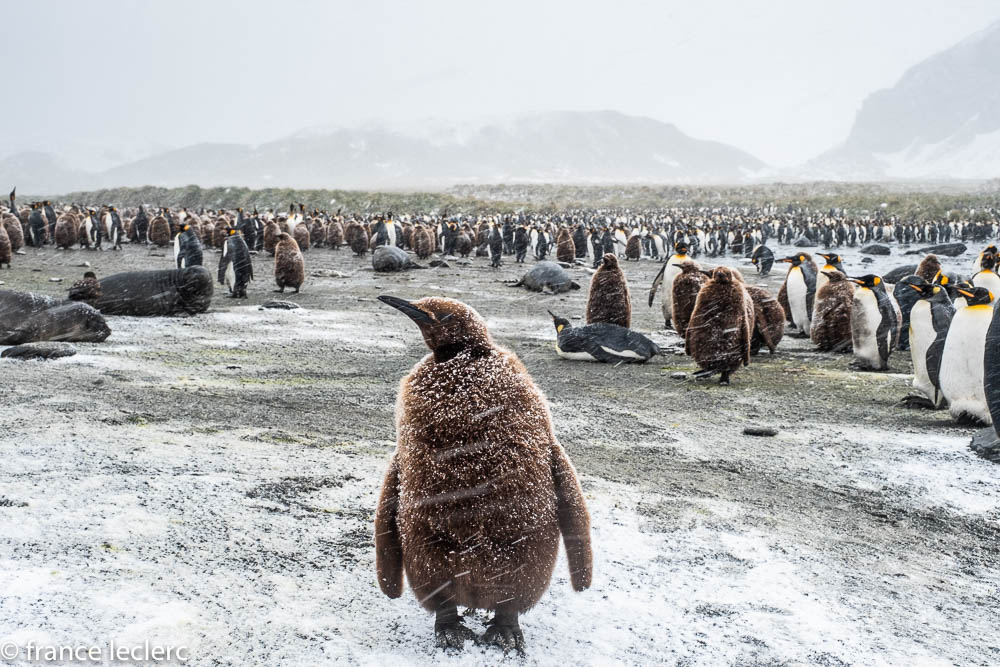 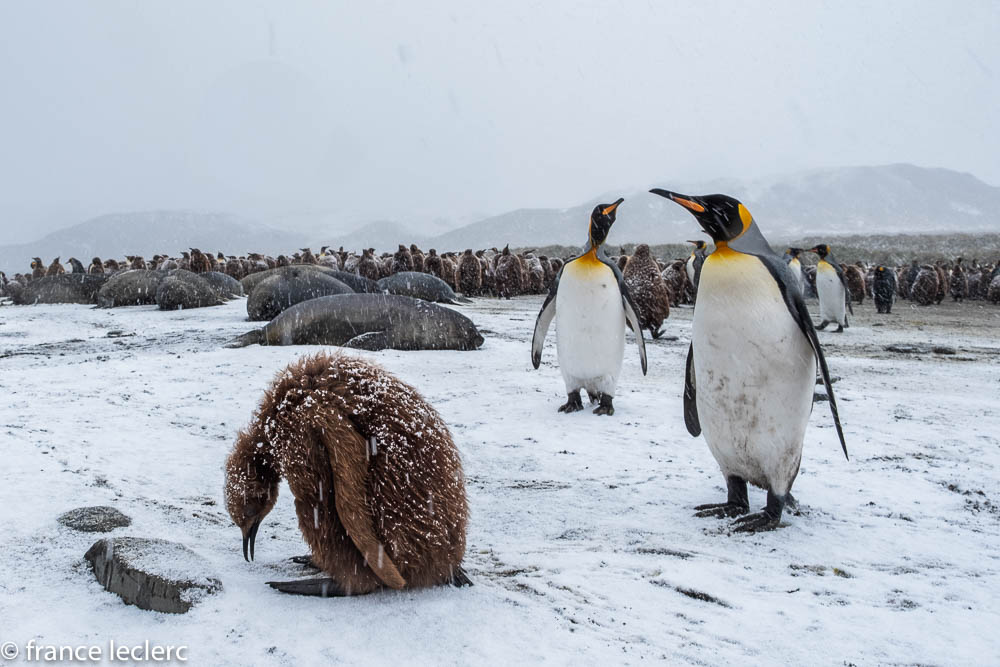 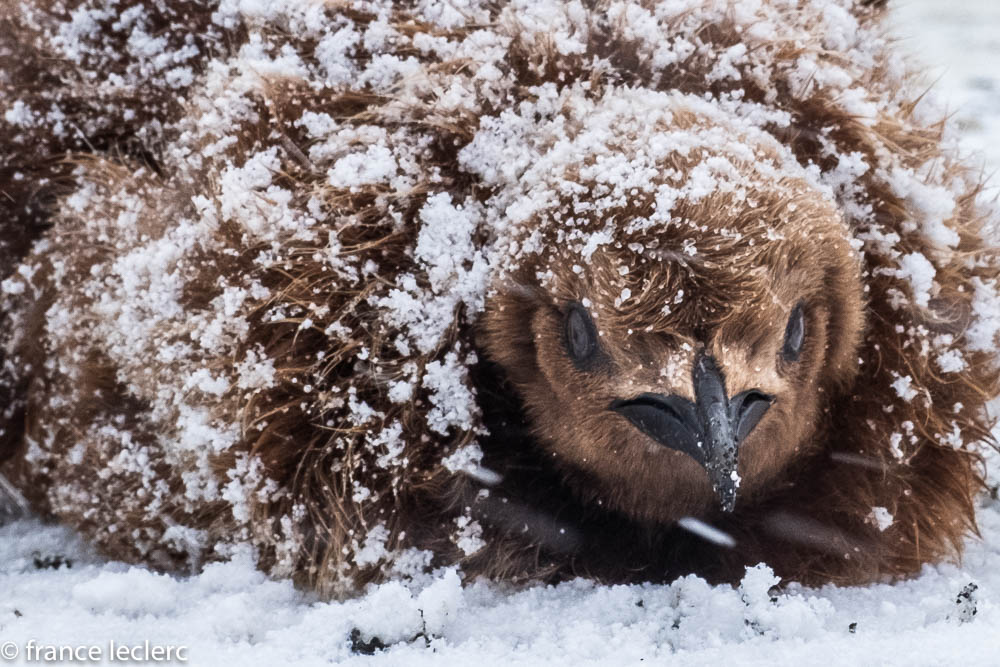 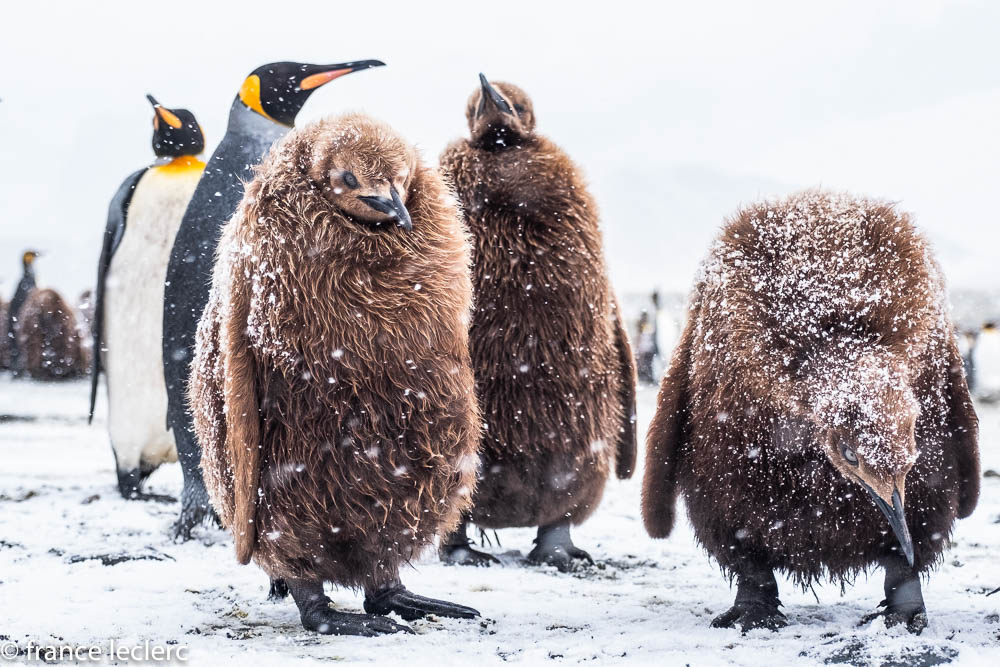 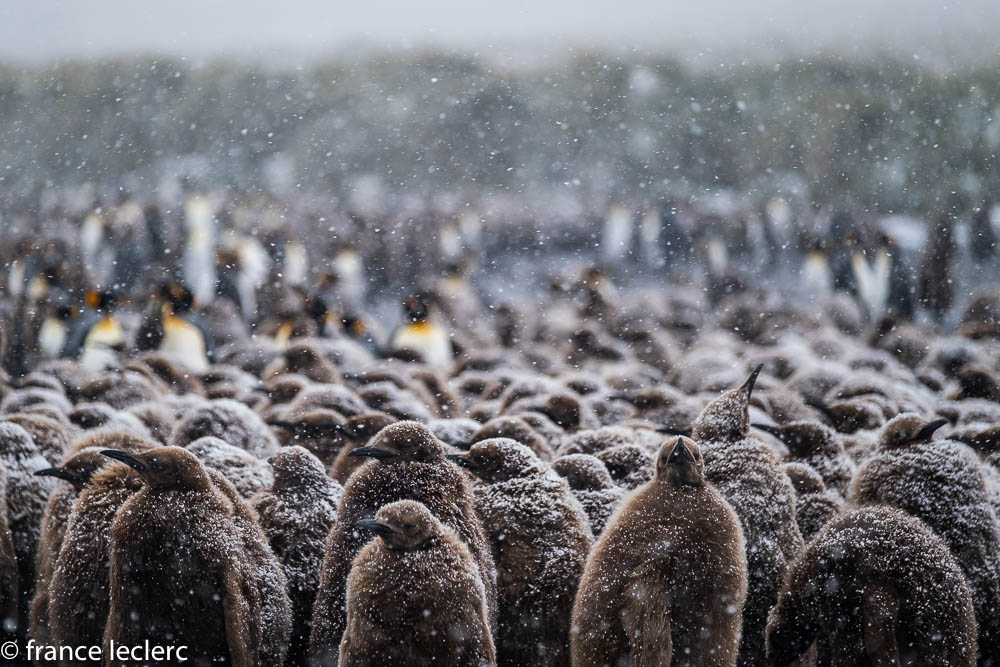 Can’t get enough penguins?  Be patient. The next post will be on Antarctica with plenty more penguins (but not British ones.)