Brick by Brick in Bangladesh 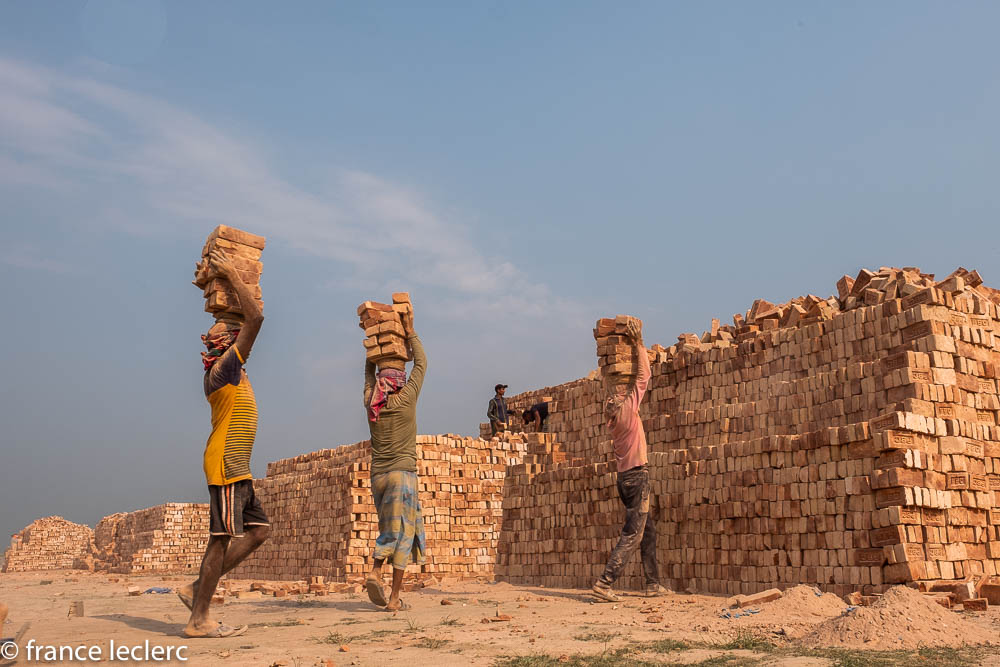 In my last blog, I mentioned that pollution and economic struggles are significant problems in Dhaka  (Life in Dhaka).  Little did I know that the air I was breathing in the city would seem pristine compared to that at my next stop, the brick factories outside of Dhaka.

While driving out of Dhaka, one cannot help but noticing many long thin chimneys on both sides of the road.  When told by my local guide that they were brick factories, I asked him why there were so many.  Because Bangladesh is growing fast and needs cheap building materials and we know how to make bricks as we have been doing it for years, he answered.  Curious about how this was done, I asked if we could stop and have a look.  It quickly became clear that the way they are making bricks now is probably the same way it has been done for decades, namely all by hand, brick by brick.

During the dry season when there is no work to do in the fields, workers of all ages come from rural parts of Bangladesh, to earn a little money in the brickyards. They often stay for months, living in houses built in the yard, often with their families.  The work is backbreaking and exhausting, to say the least.

One can find clusters of men dealing with different stages of the process.  One group is busy extracting mud from which the bricks are made, mixing it with water to keep it workable.  The mud is then transported by wheelbarrows to another group of people, the brick makers.  This is where the mud is put in wooden molds to give the bricks the desired shape.  The brick makers work extremely fast as they are paid per brick made. 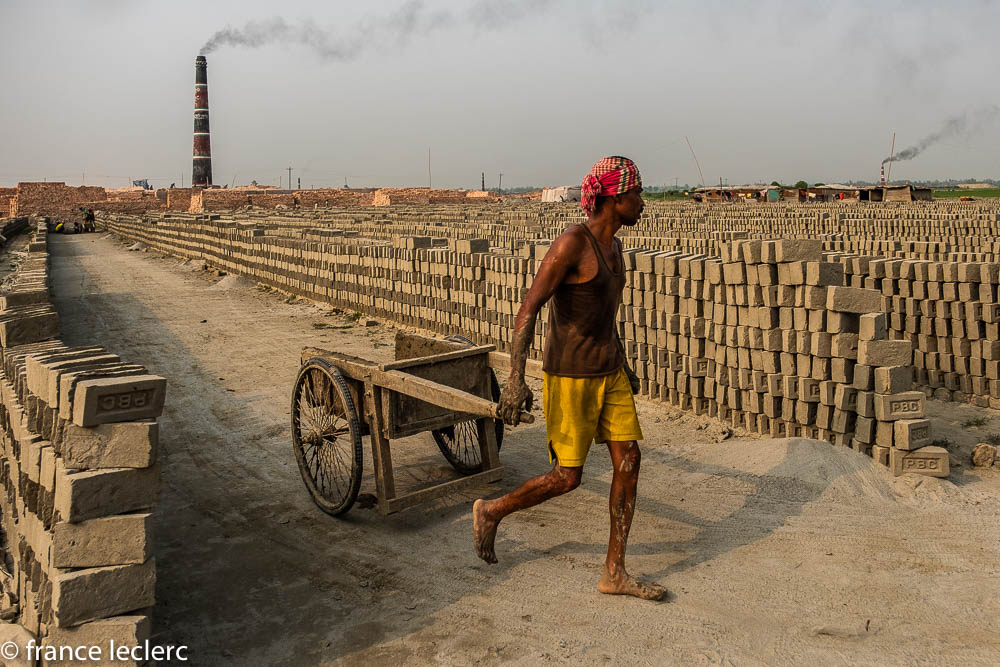 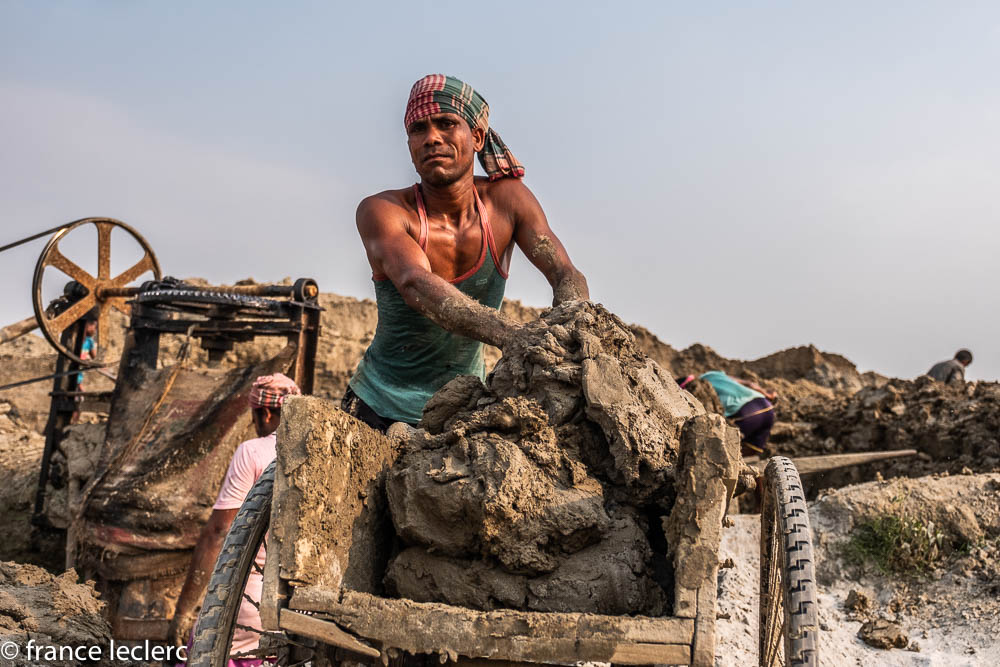 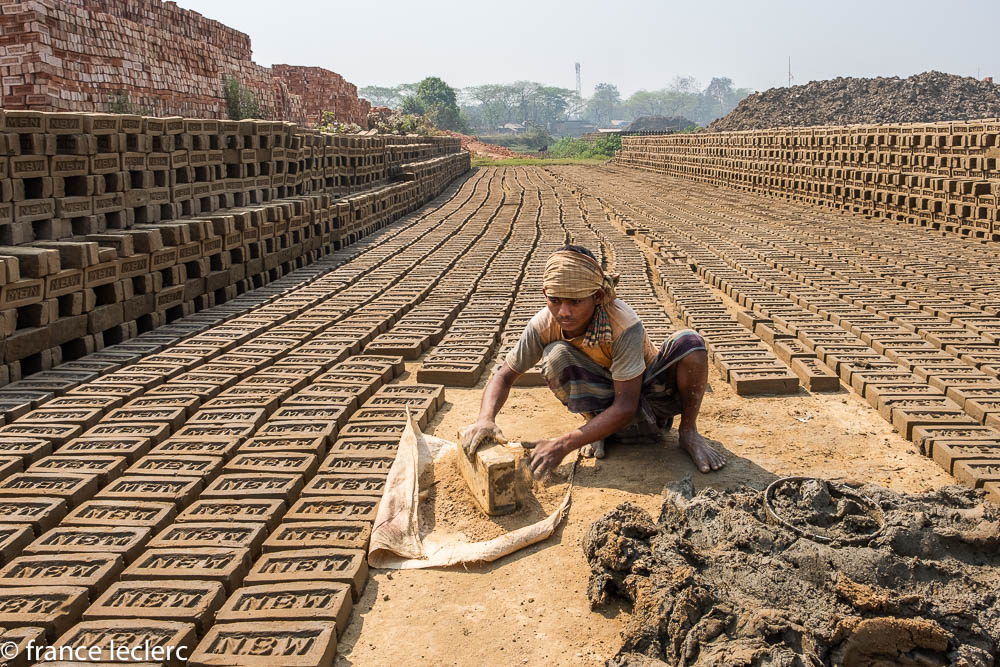 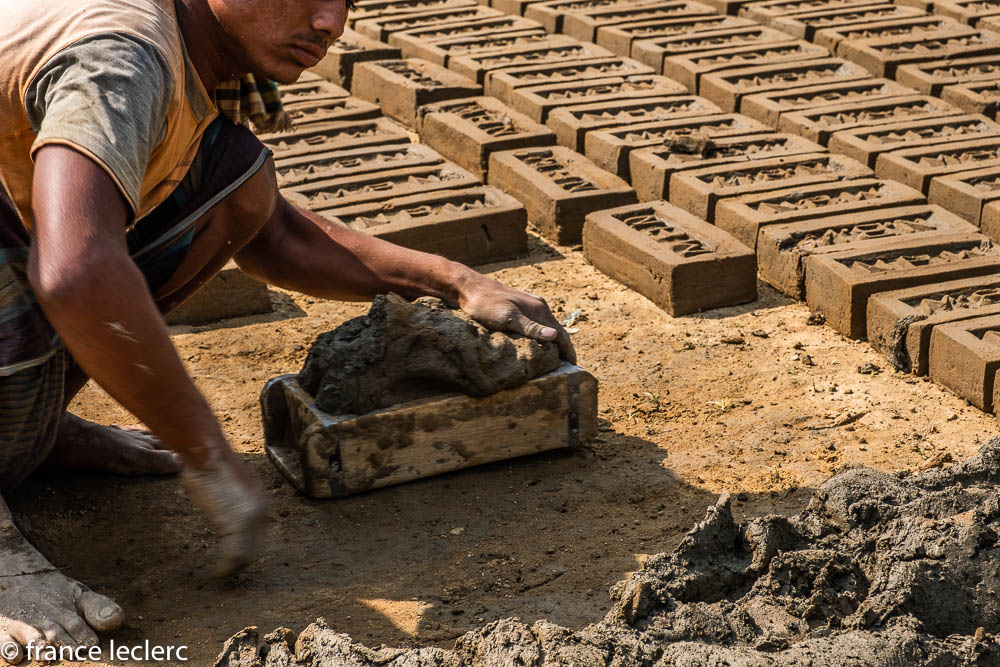 The next phase is the baking of the bricks. Here a group of workers brings the raw bricks to the kiln to be baked by balancing as many as sixteen loose bricks in two piles on top of their head.  When the baking is done and the bricks have cooled off, another group carries them out the same way.  This was mesmerizing to watch.  In one of the factories I visited, workers from both groups (ingoing and outgoing) were using the same path so would basically be intertwined all the while balancing their heavy loads.  This is a human factory in its most primitive form.  The entire process is done with workers wearing their own clothes, and no special protective gear of any sort.  They are constantly breathing irritating red dust, hours on end.  All this is done for about $25-30/week depending on the worker’s speed. 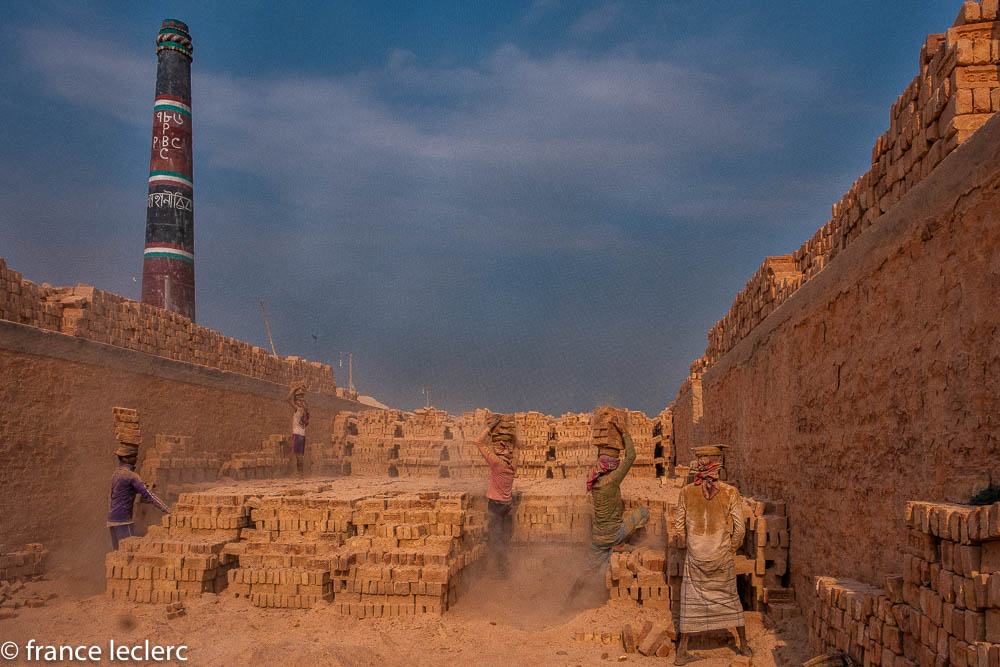 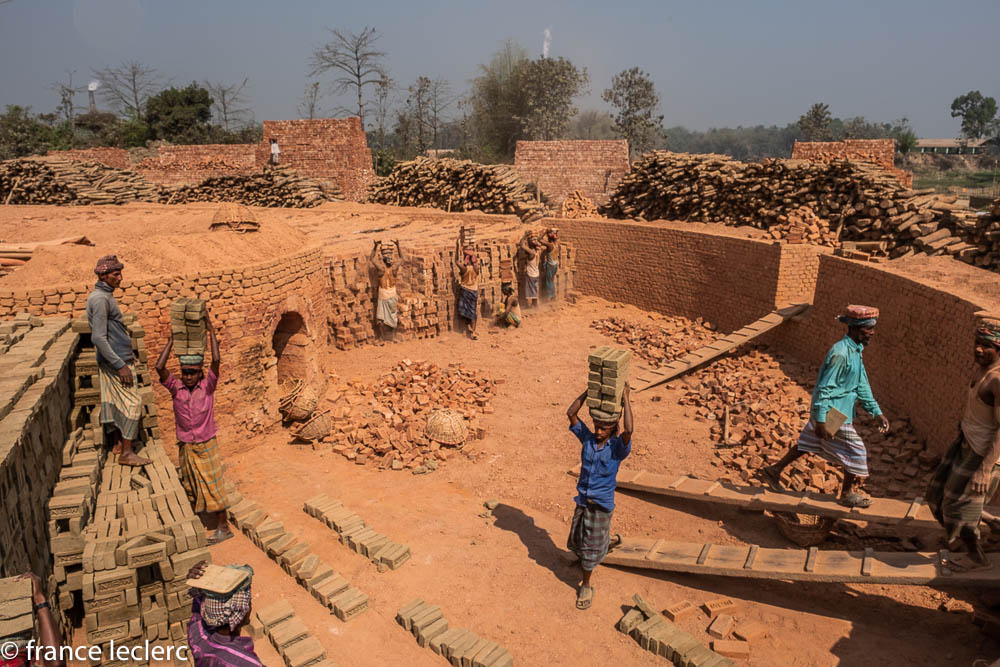 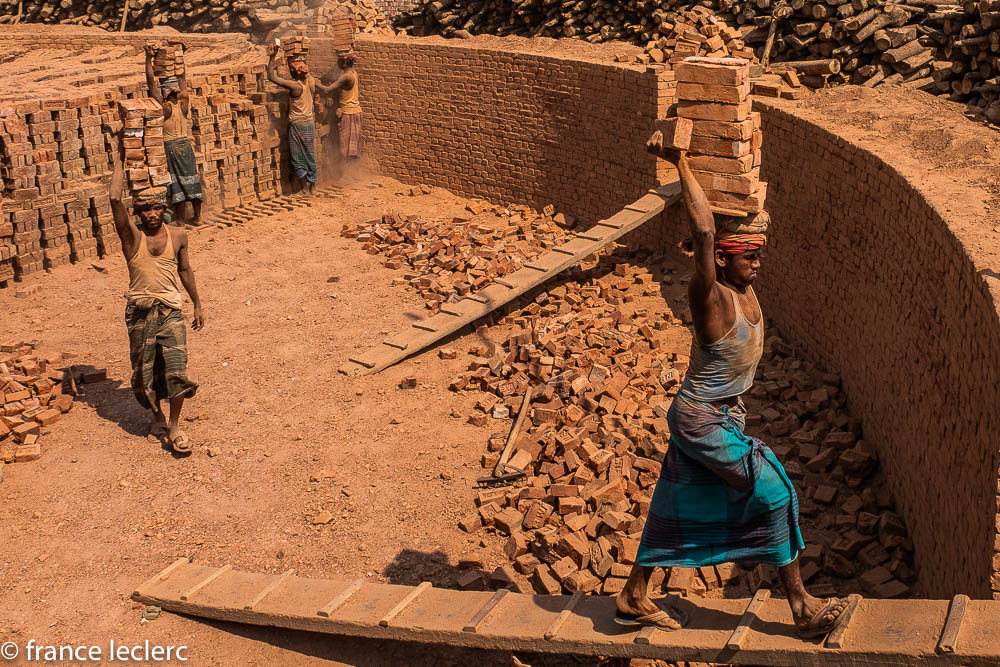 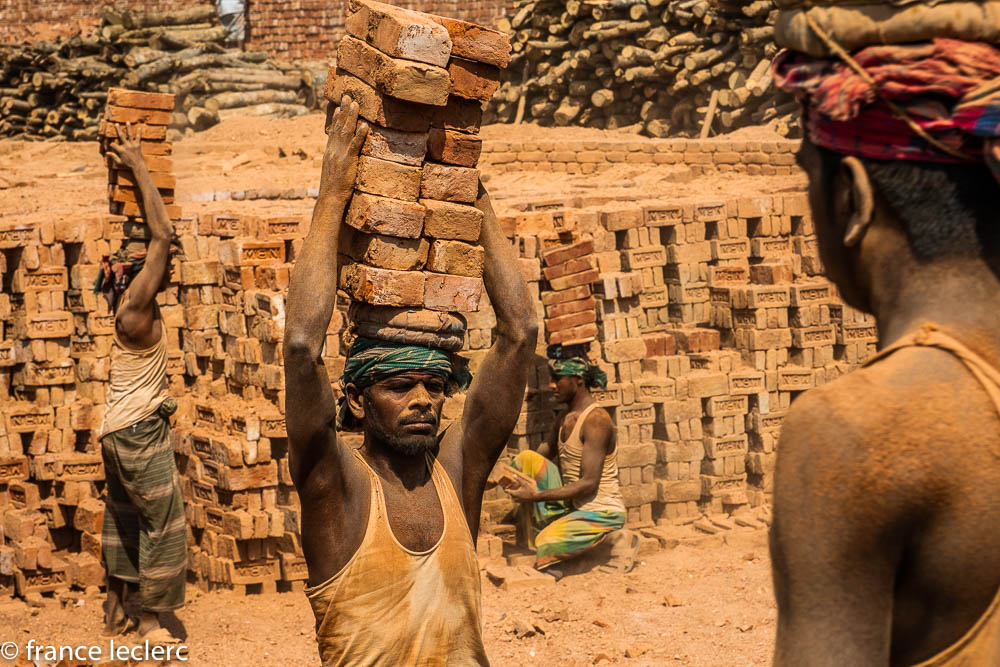 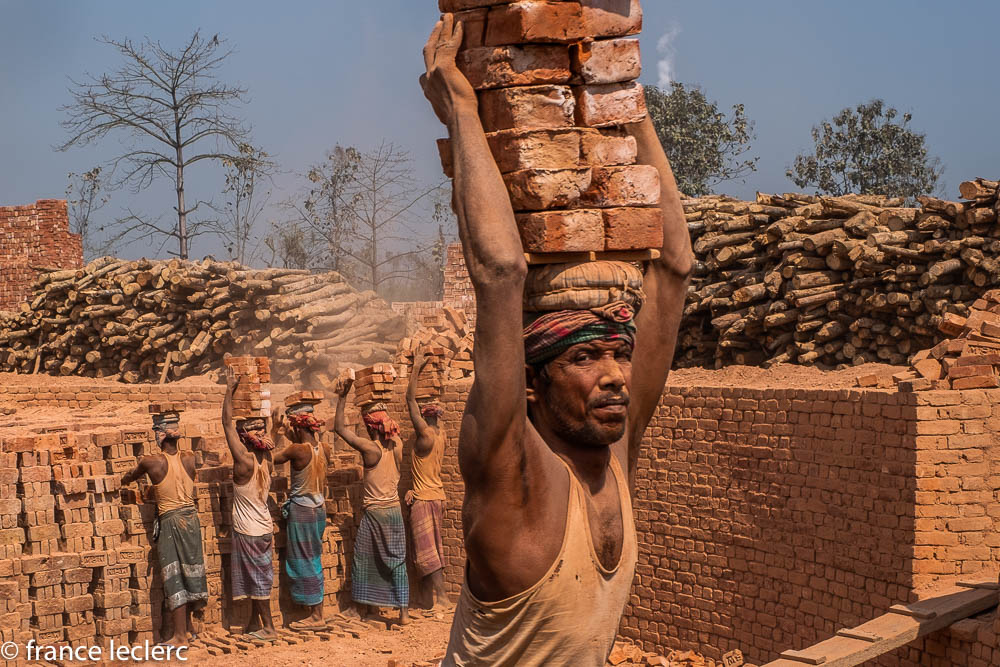 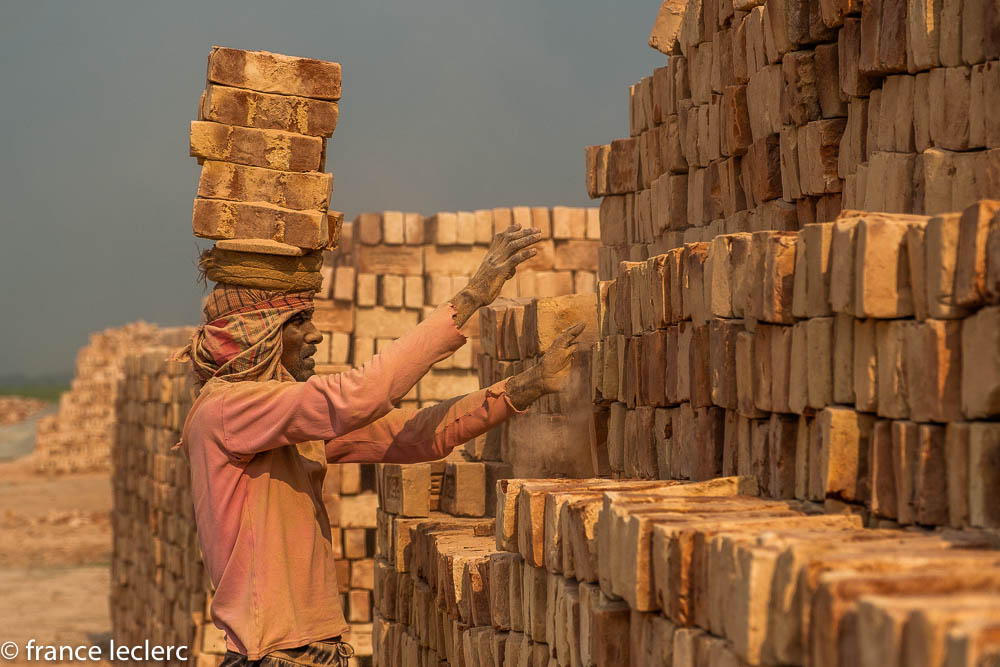 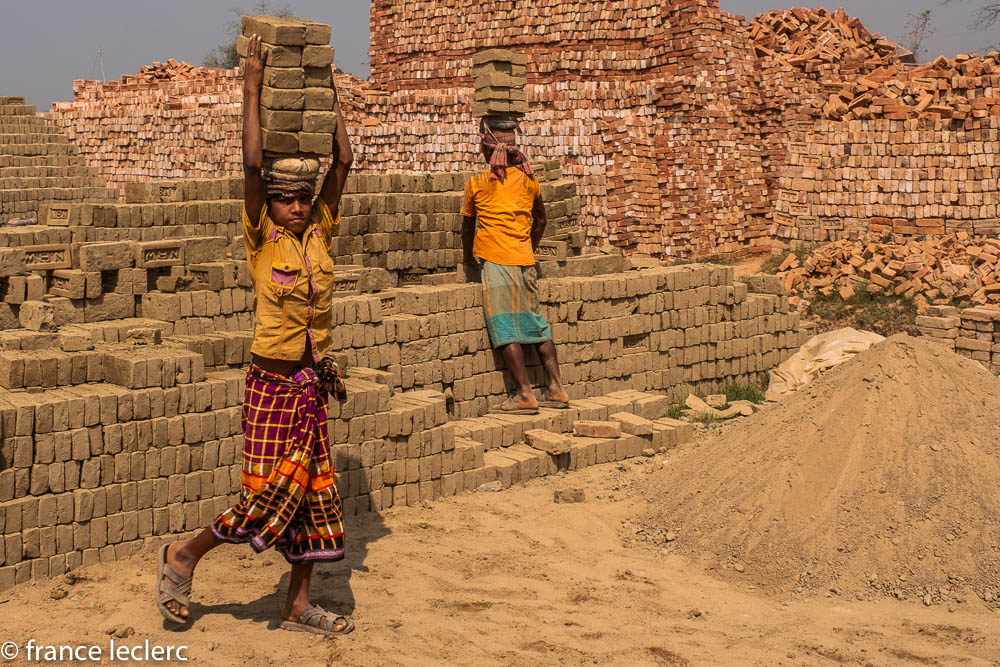 The red dust also spreads to nearby towns and villages, potentially creating health problems for all.  Legally, no brick factory can be put up within 5km of residential areas. Yet everywhere across the country, bricks are produced close to villages and cities. 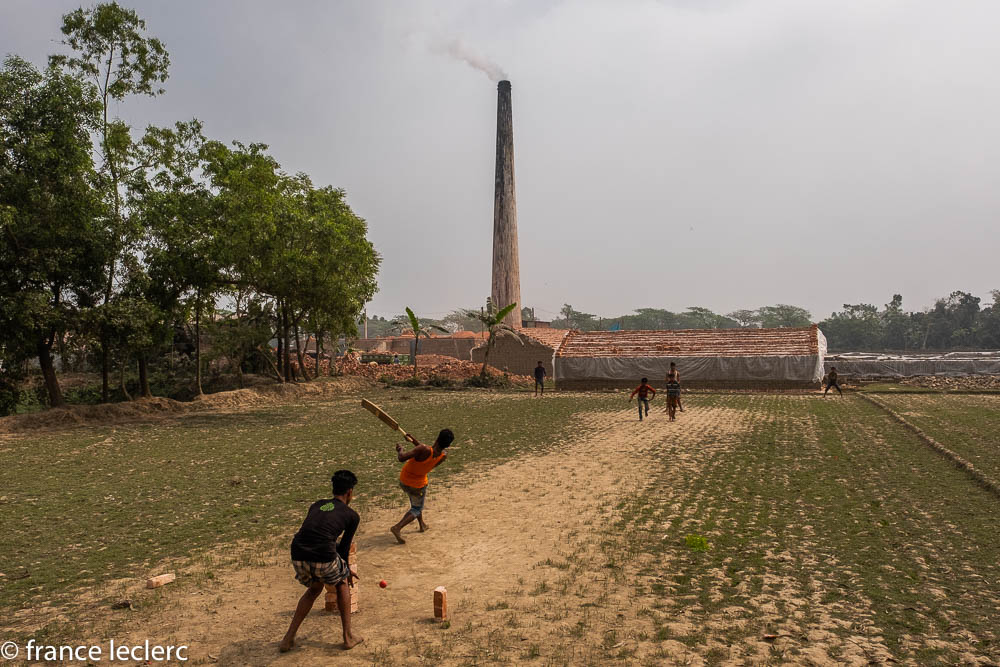 And the dust is not the only environmental challenge.  The ovens used to bake the bricks are heated using coal, which is also carried by workers using baskets on their heads. 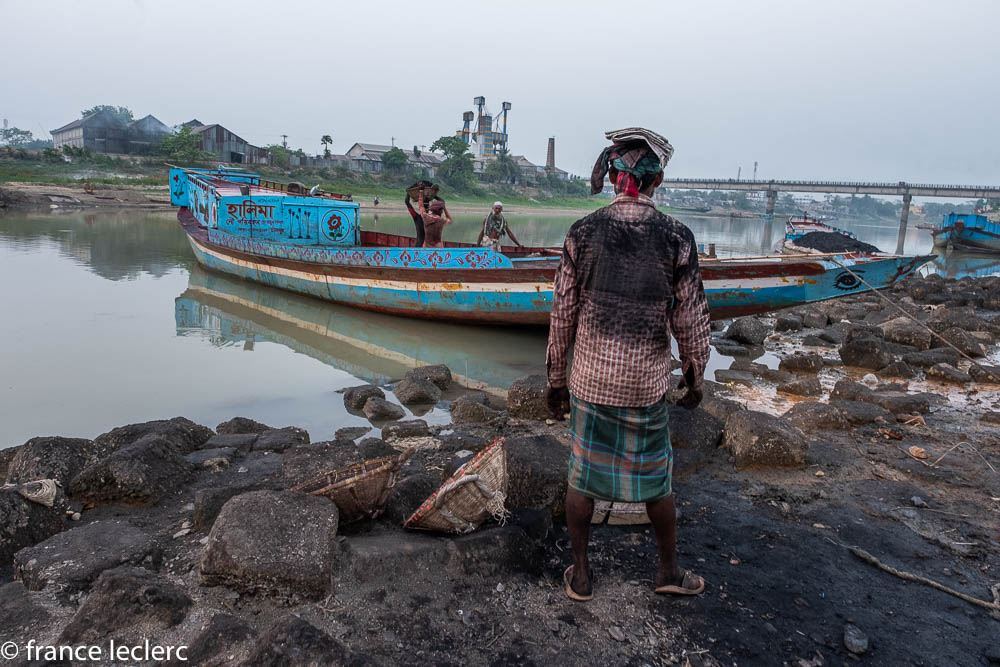 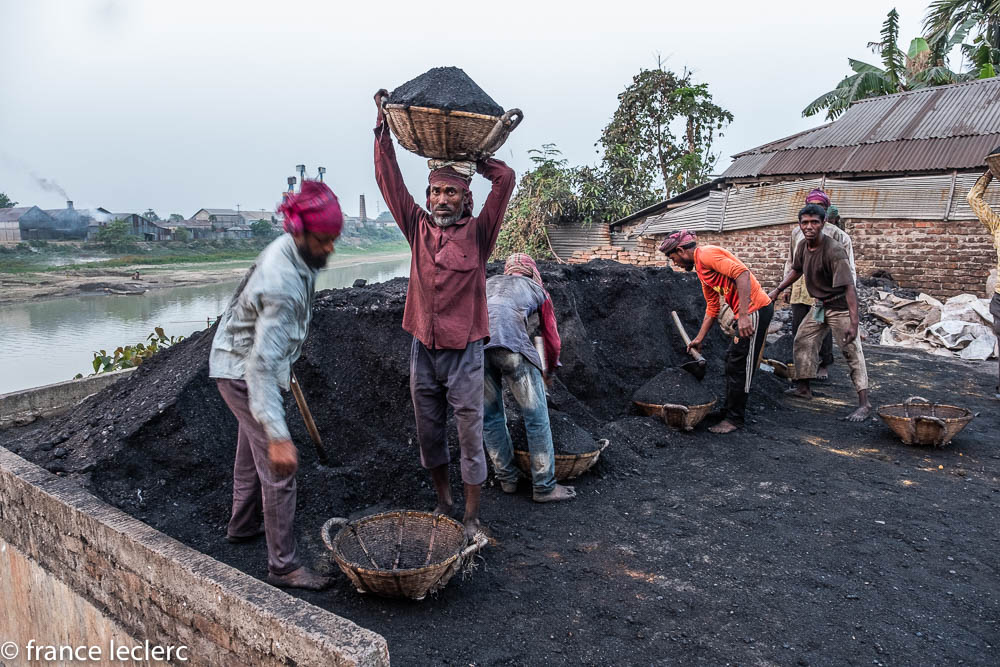 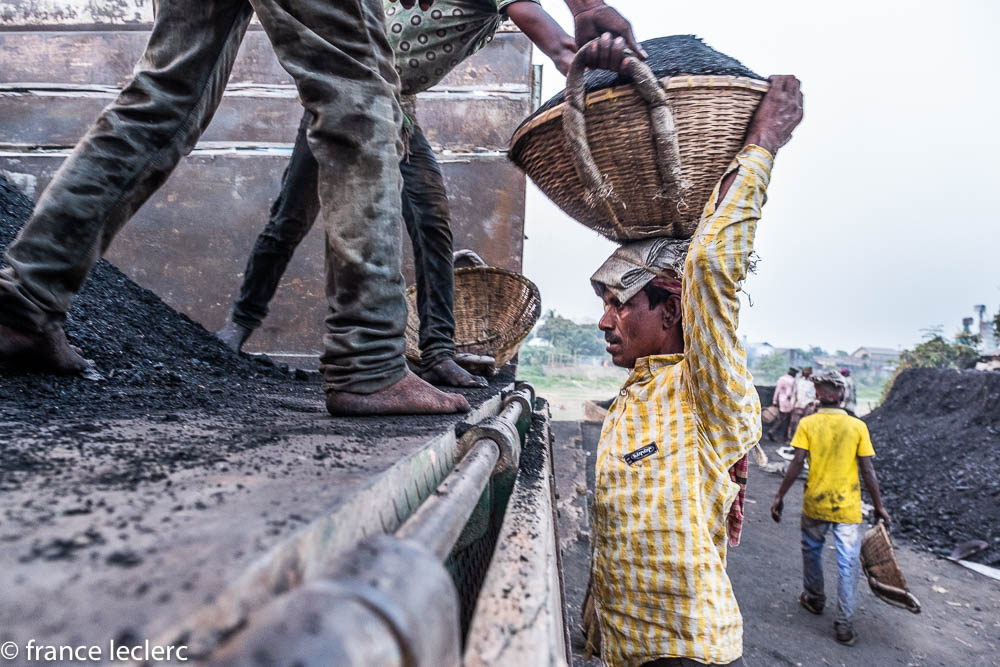 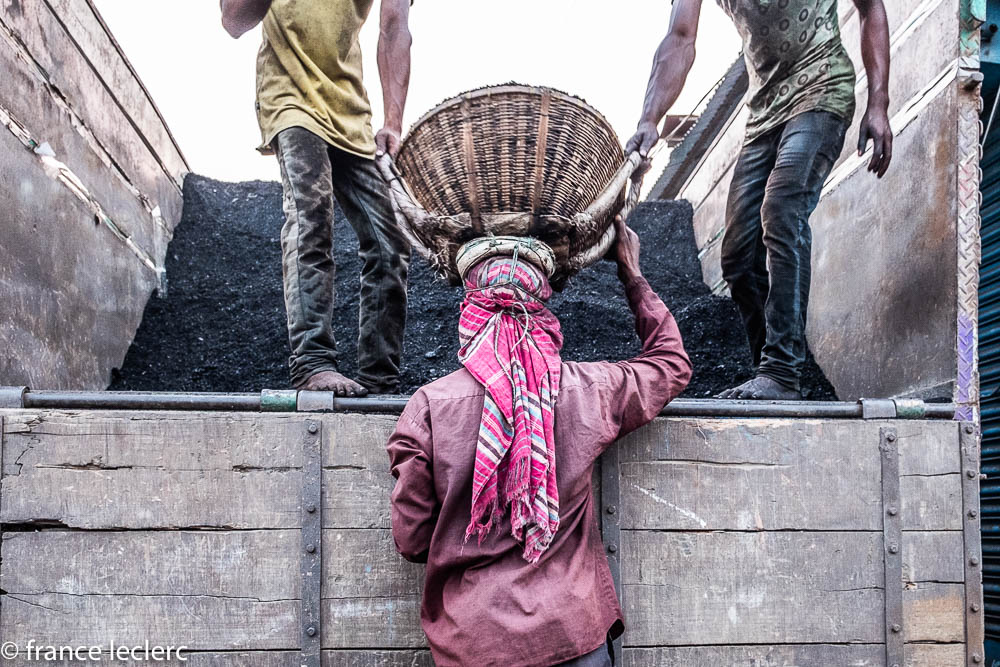 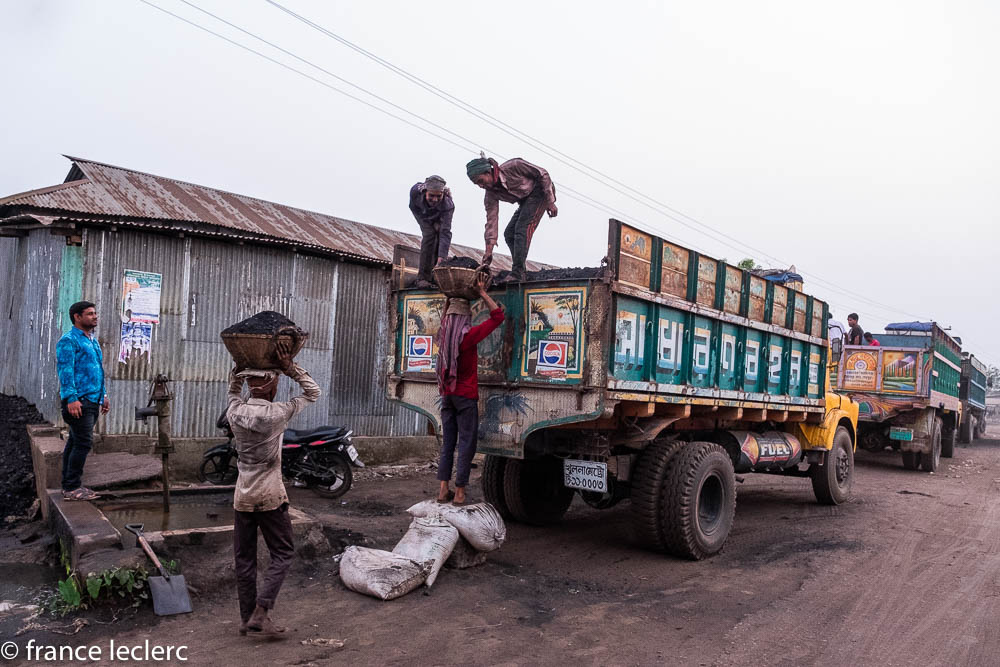 With the primitive balancing act involved, of course, many bricks are damaged, but nothing is wasted here.  The broken bricks are smashed into tiny pieces to be converted into sand.  Bangladesh does not produce enough sand which is needed for building materials, roads, and cement, so the damaged bricks are an important source of these materials that will be used all over the country.  I guess what was taken from the earth returns to the earth. 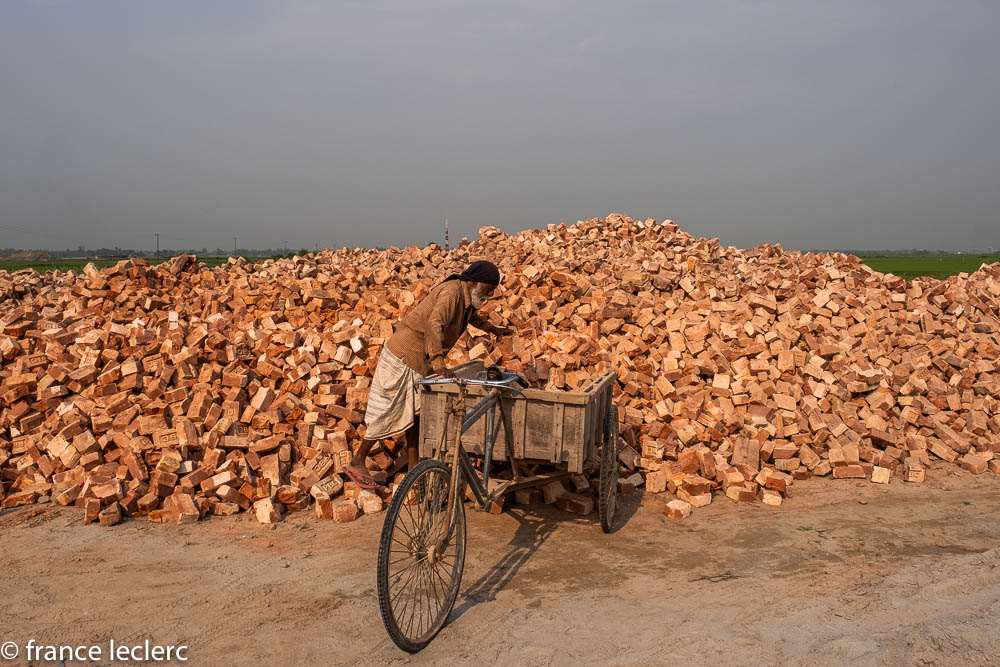 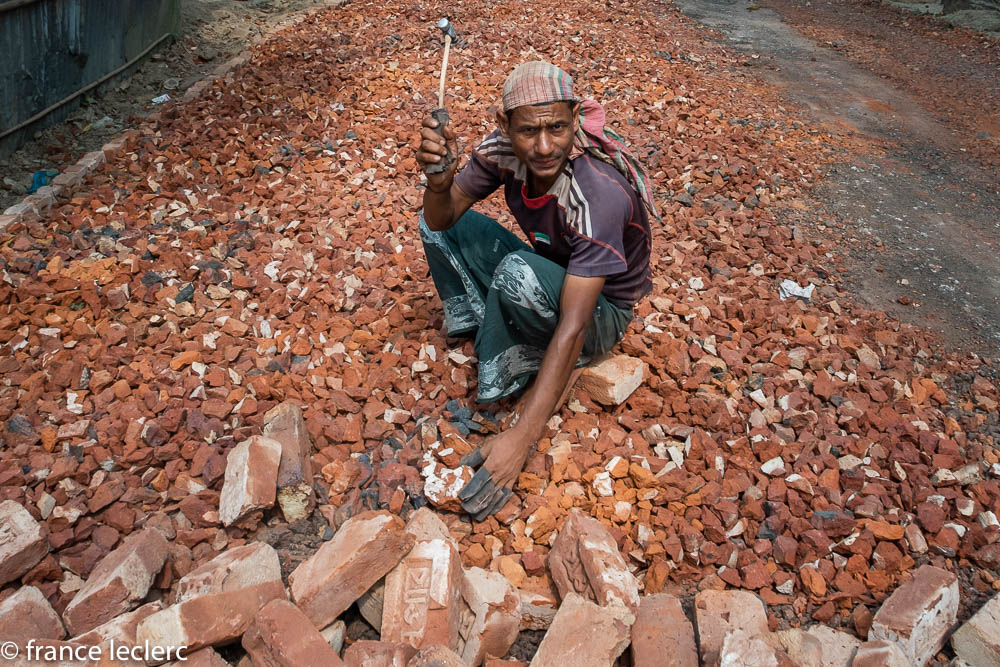 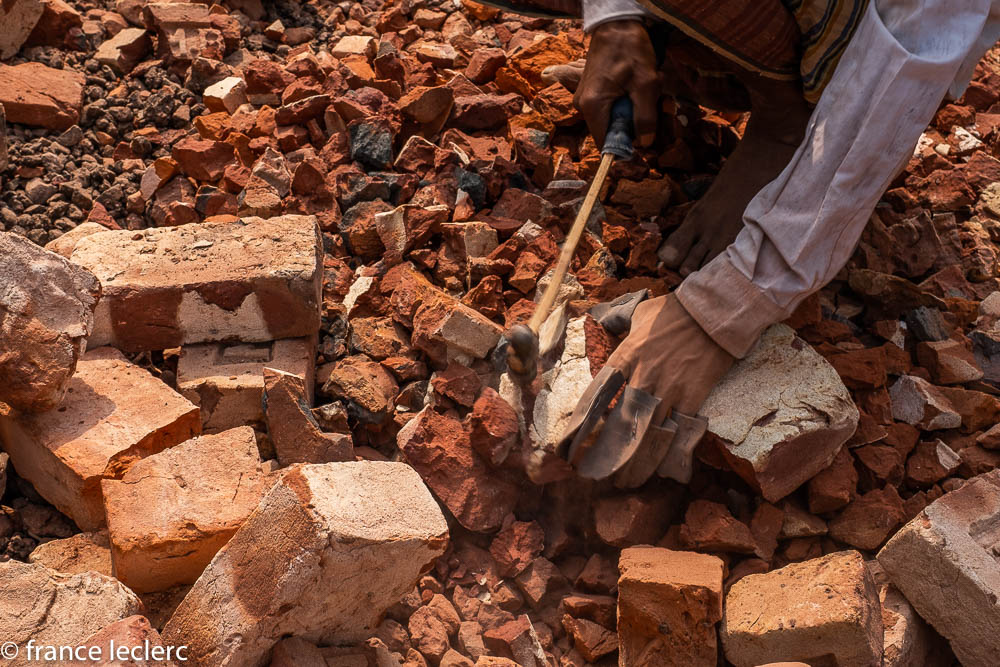 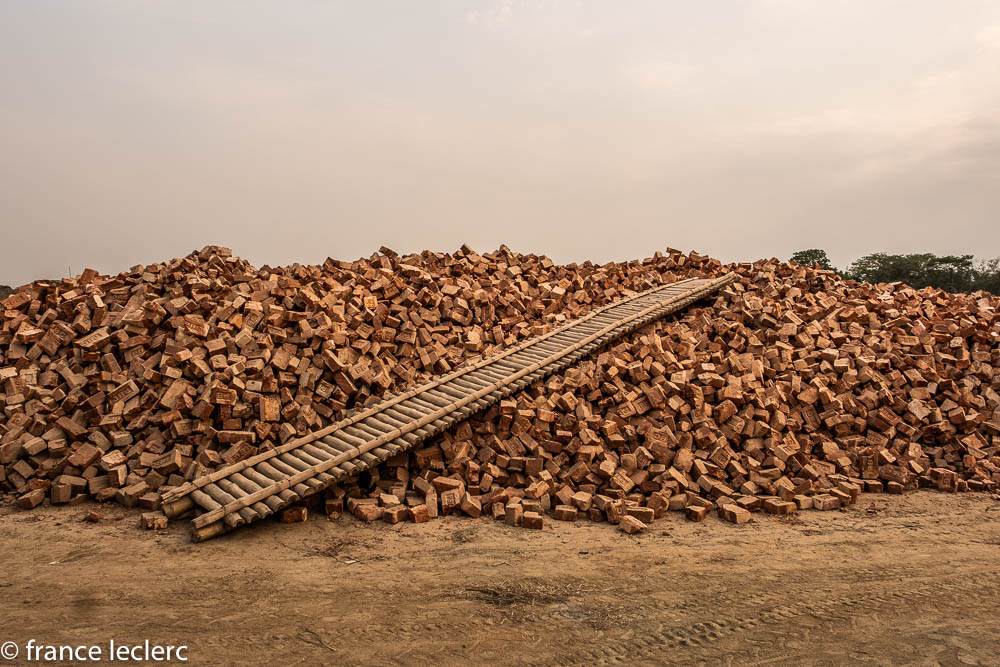 Watching this process, it is not only bricks that are broken.  It is heartbreaking to see people working in such harsh conditions for so little pay. Although the output yields building material for a low monetary cost, there is clearly a high price being paid by the workers, local residents, and the environment.

P.S. I am also showing some of these images on the Social Documentary Network website. Here is a link to the exhibit.