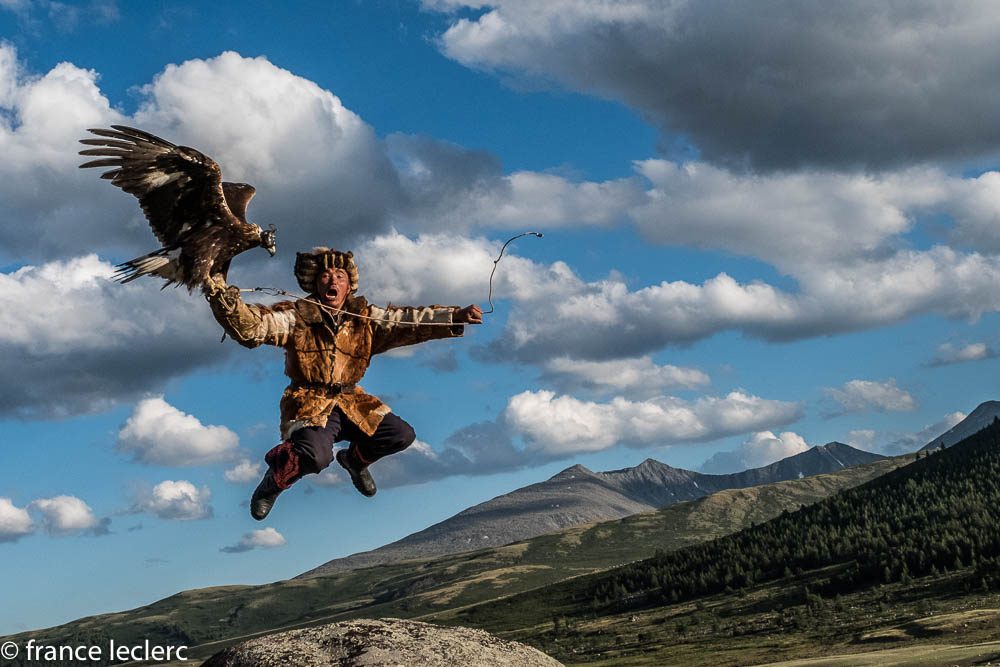 As readers of this blog know, I particularly enjoy photographing people. So one might reasonably ask why I would want to go to Mongolia, the least densely populated country in the world, and in particular Western Mongolia, the most remote region of the country. Well, I like photographing people who have interesting lives and strong ties to their culture. Western Mongolia is home to the Kazakhs, a semi-nomadic people who have maintained a strong connection to the tradition of migration and eagle hunting they have practiced for generations. So last summer, off I was to remote Western Mongolia.

Though the  Kazakhs are the second largest ethnic group in Mongolia, there are about 100,000 of them representing less than 5% of the population.   And getting to these Kazakhs is a challenge on its own. After flying to Ulgii, the largest town in Western Mongolia, one basically drives forever on non-existent roads in an old Russian vehicle which seems to be able to go anywhere over any terrain. Describing the rides as bumpy does not begin to capture the experience. The landscape is magnificent in an eerie way; miles and miles of arid plains surrounded by the Altai mountain range broken up by tiny bits of greenery when we approach a beautiful glacial river.

Kazakhs migrate with their flocks to look for pasturage as the seasons change. We visited with three extended families that were already settled in their summer homes, all very isolated with at least a day of driving between them. As I am experiencing the bone-shaking rides in our vehicle, I can only imagine the hardship of walking 100-150 km (depending on the detours the animals take) thru these terrains every season.

In the summer, the nomads live in collapsible round yurts, circular oversized tents supported by wooden sticks that are called “gers” locally, and so did we. A stove is located in the middle of the ger to keep its occupants warm during the cold nights and to warm the milk for the traditional butter tea that one is offered as soon as one walks in. The Kazakhs are warm and welcoming people and every family insisted that we share a meal with them, even slaughtering one of their precious lambs for the occasion.

Once there, it does not take long to realize how much work is involved in this lifestyle. From sunrise to sunset, there is something to do and everyone gets involved. Kazakh families are typically large and children happily take part in the chores starting at a very young age. Attending the animals, chopping wood, making cheese are a few of the tasks that need to be done every day, though of course there is still time to play. And one could swear that the children learn to ride a horse before they learn to walk, so strong is the bond with this animal for the Kazakhs. 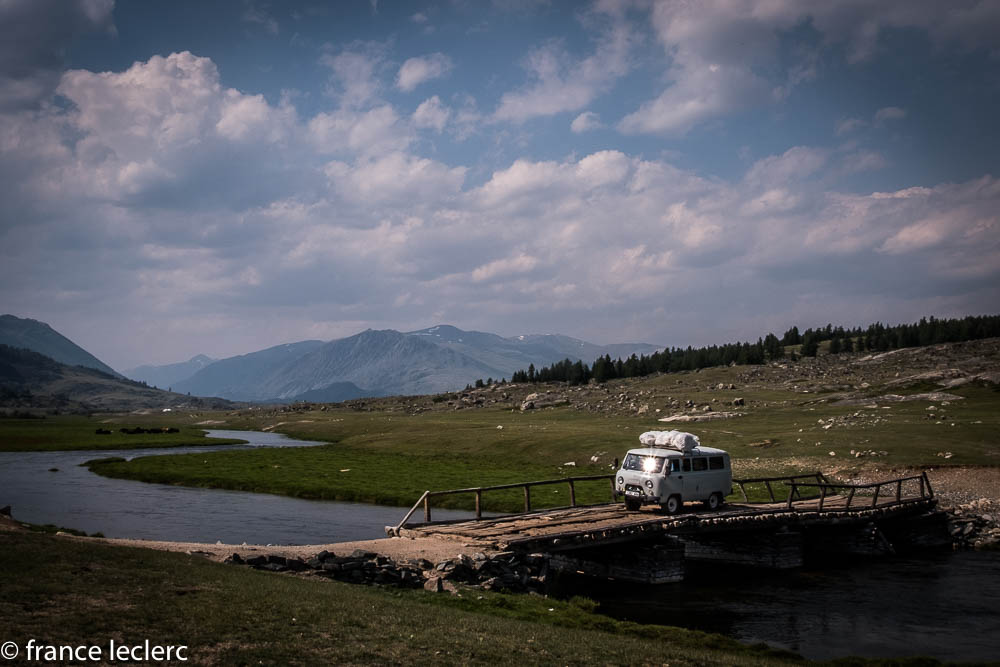 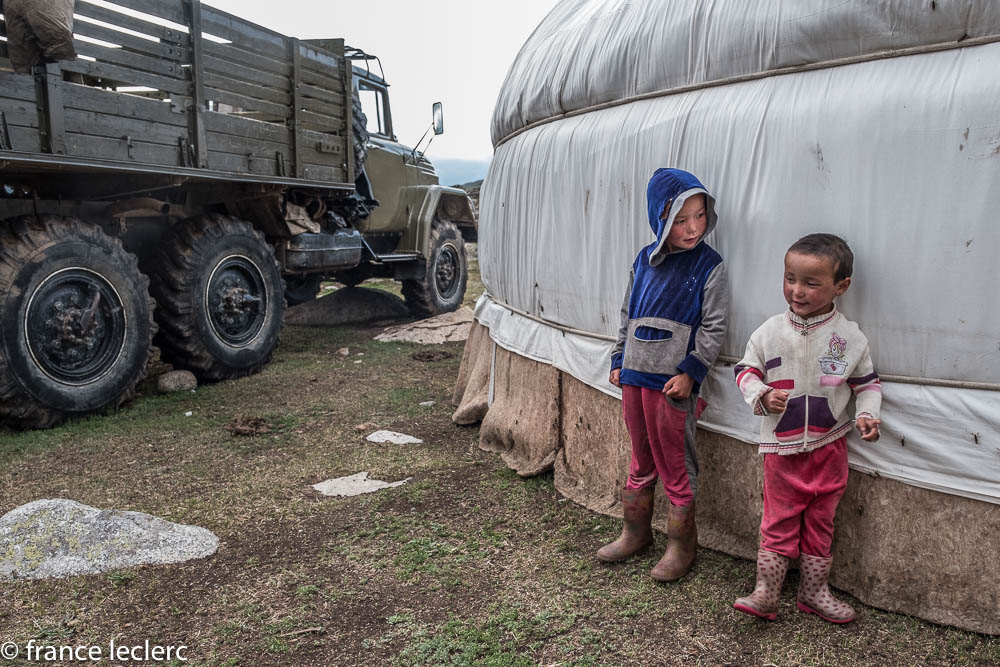 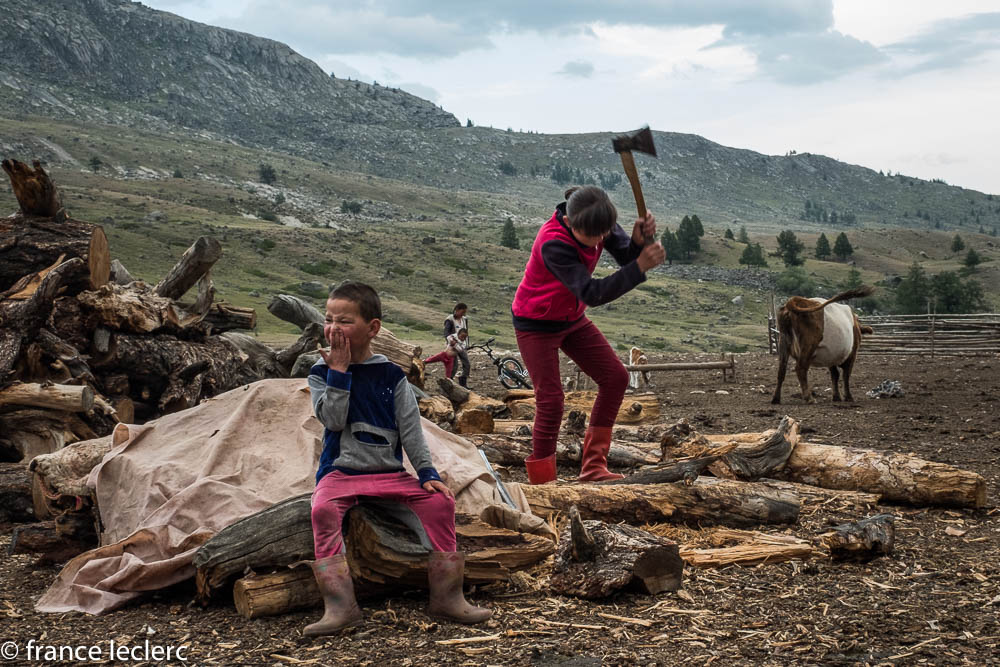 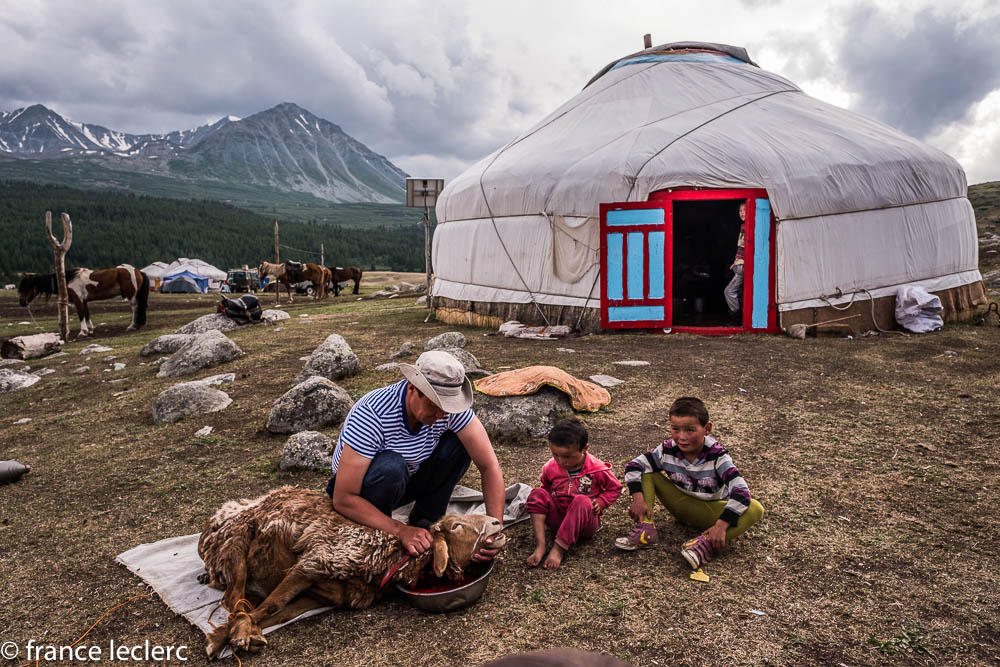 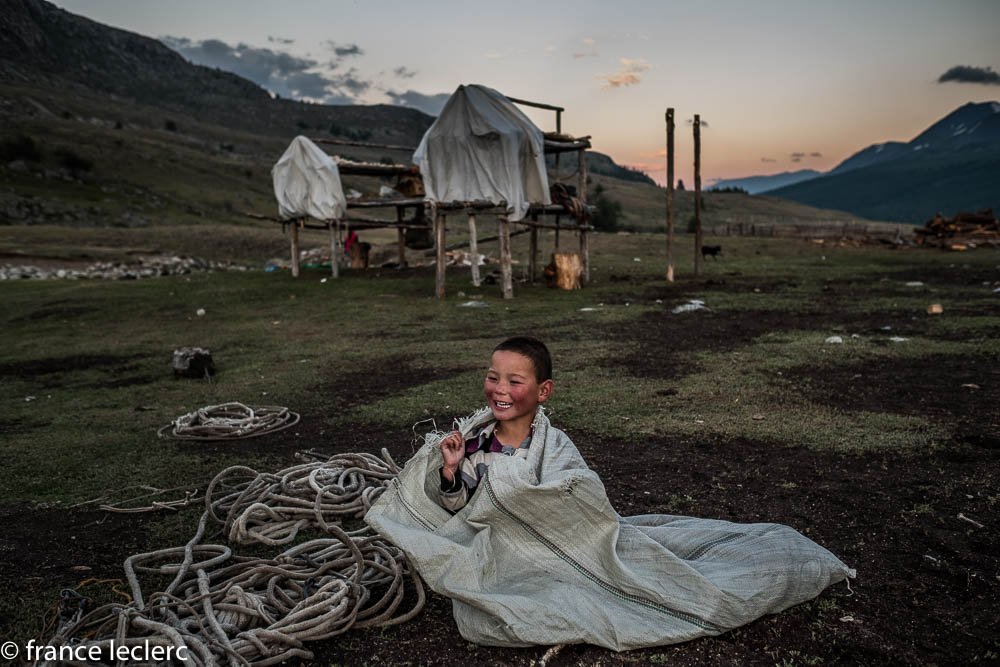 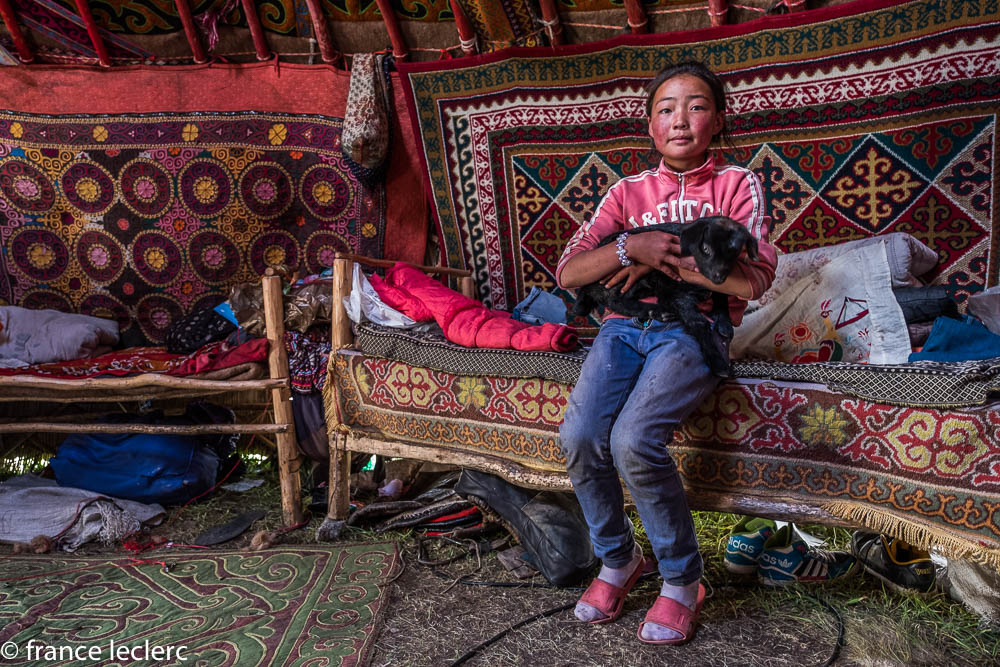 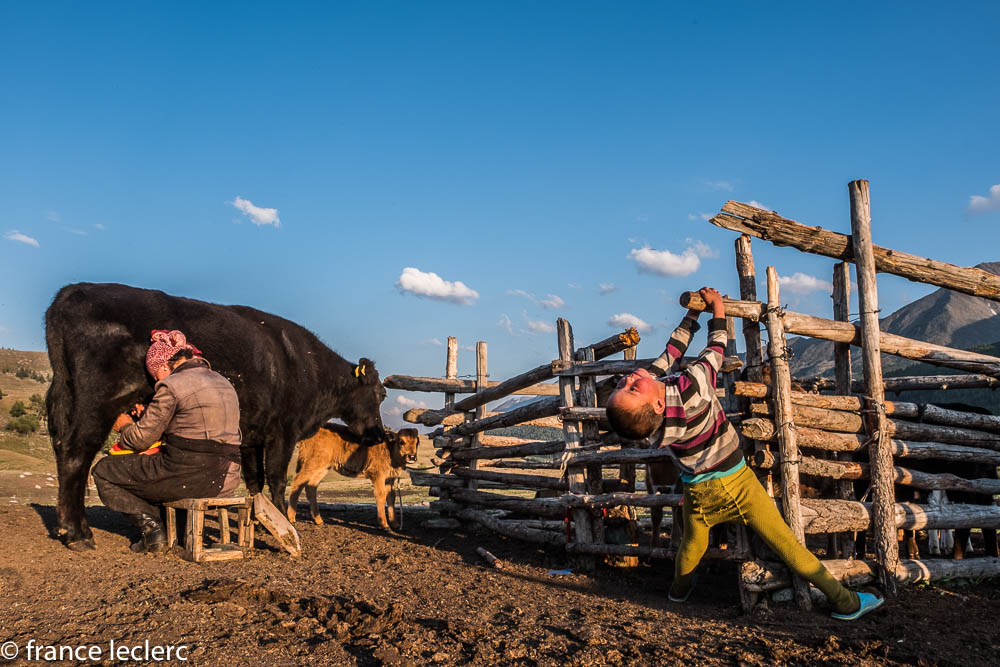 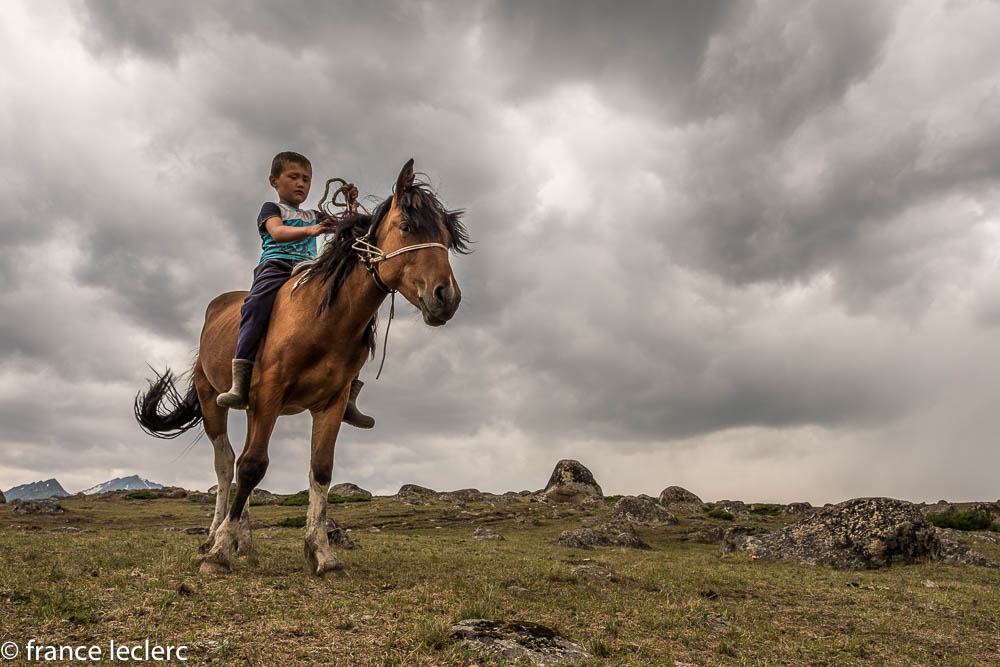 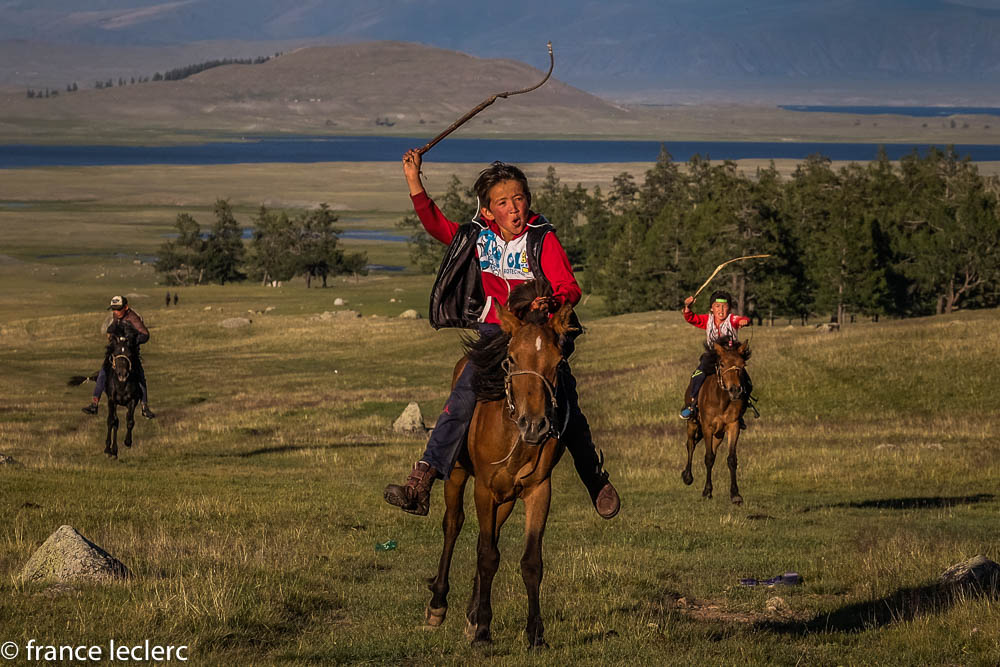 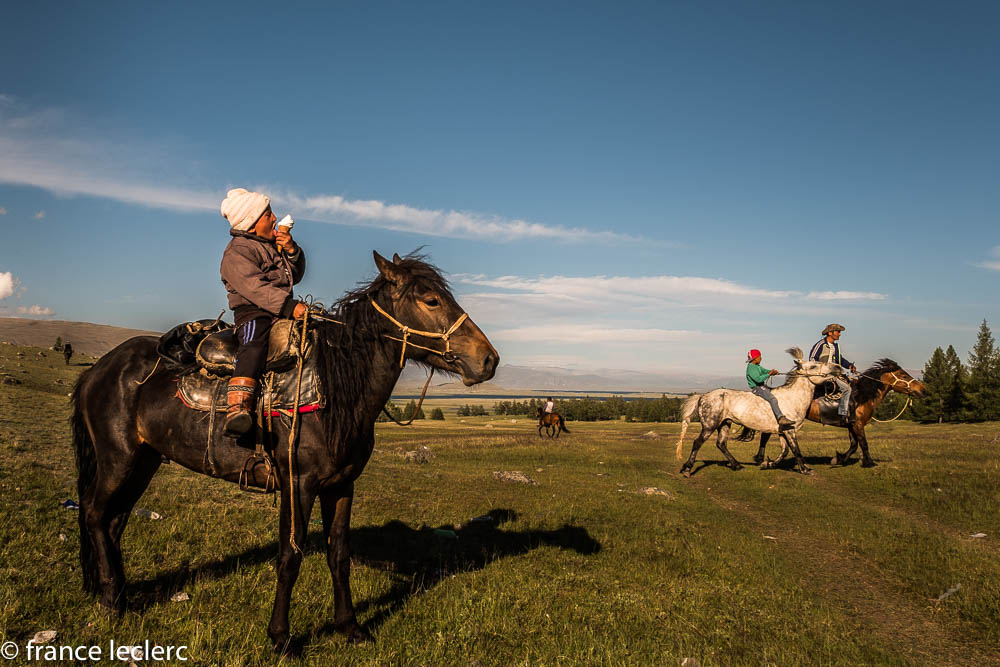 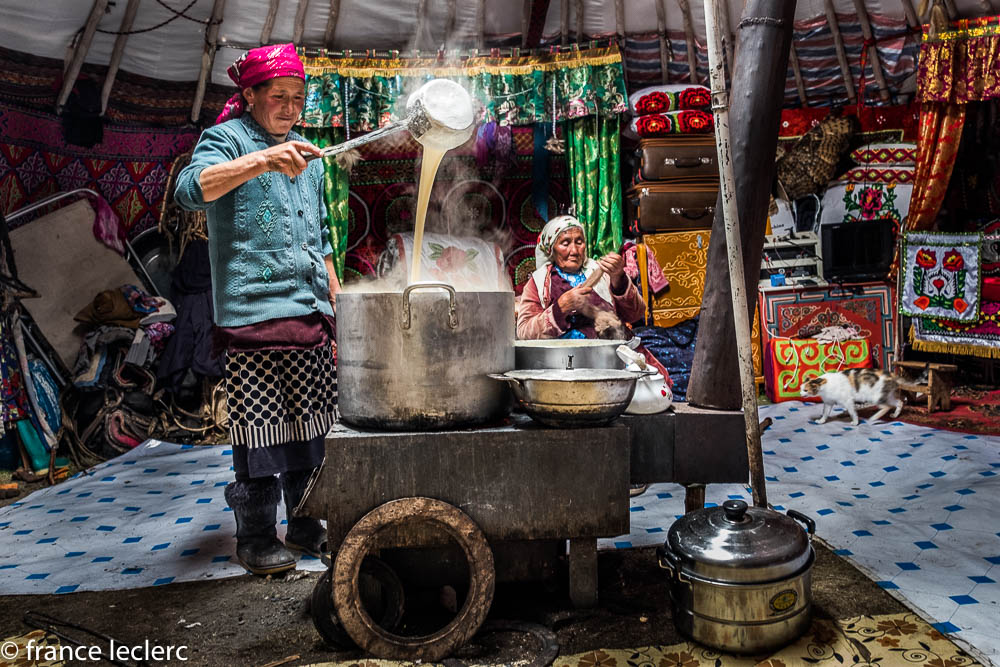 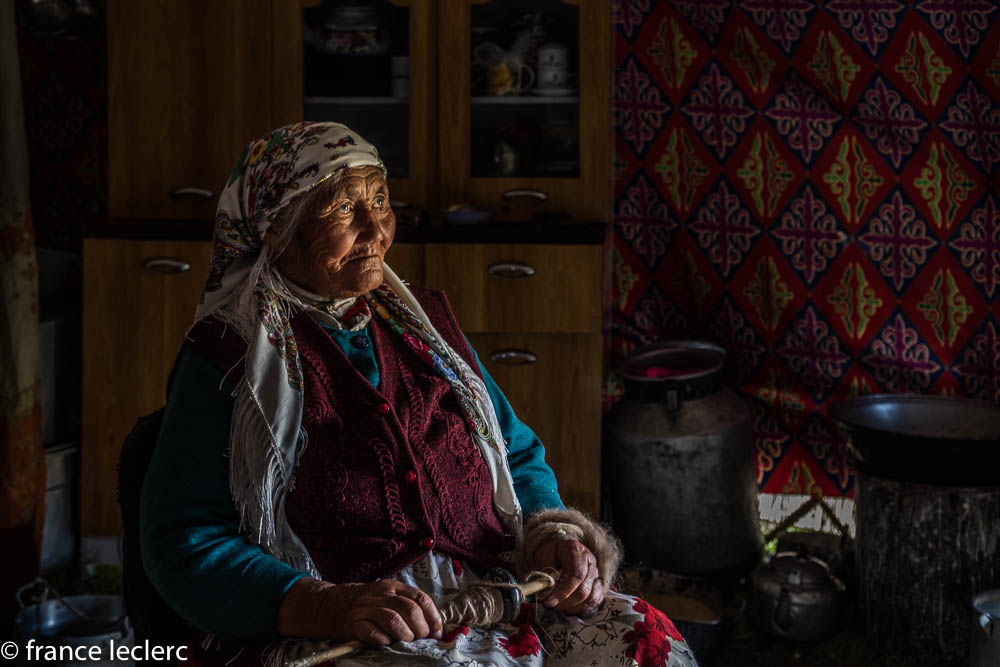 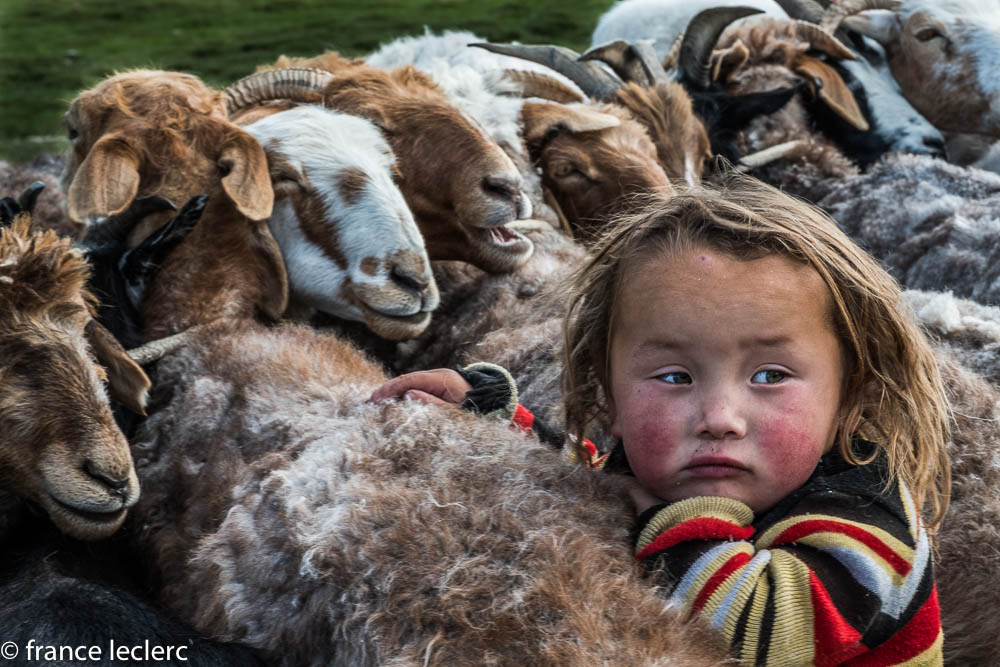 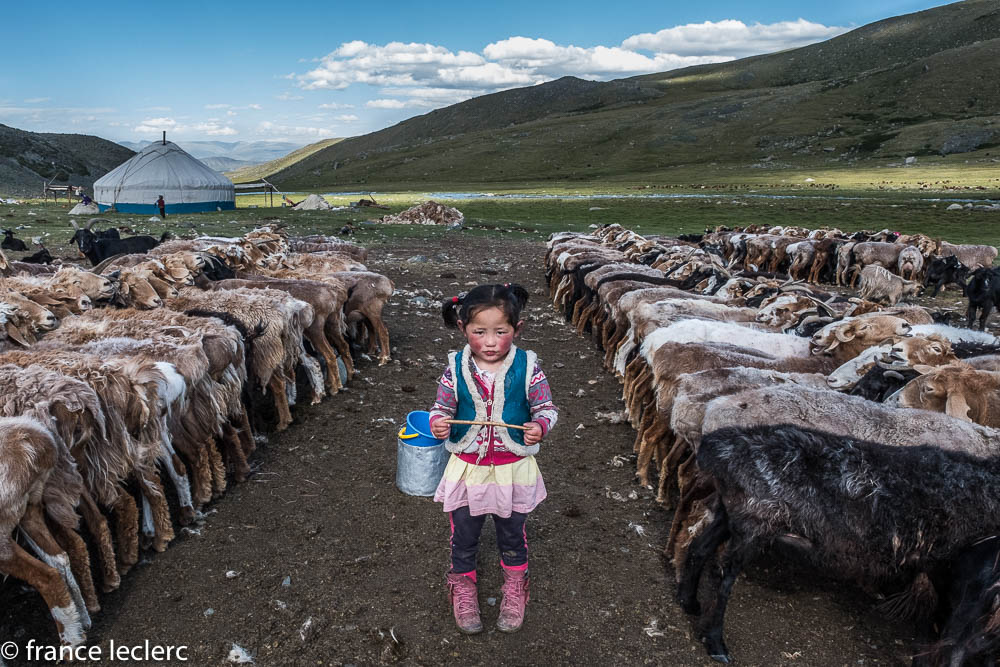 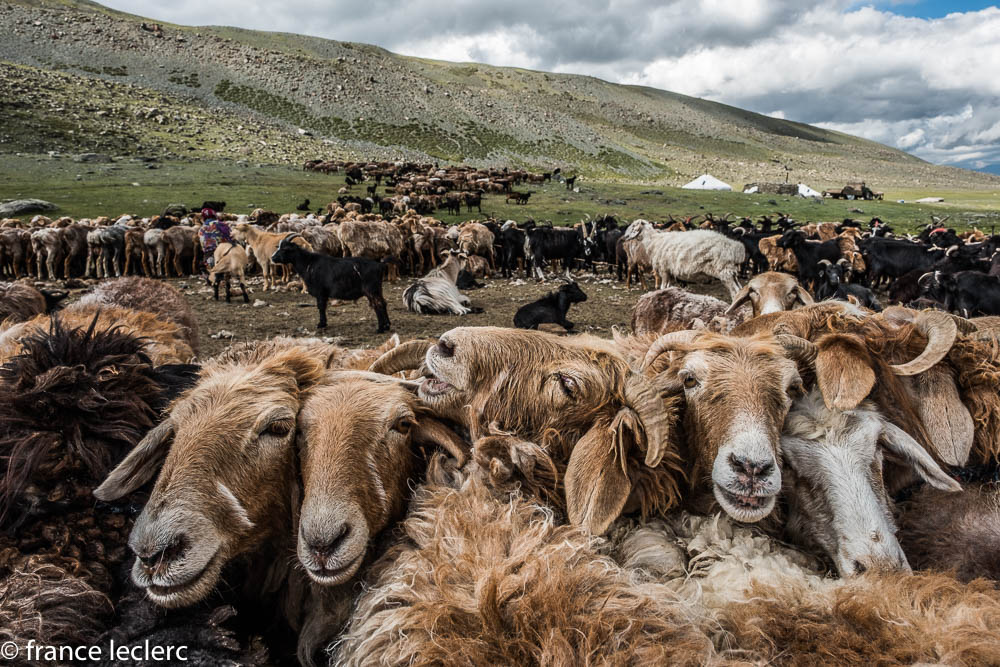 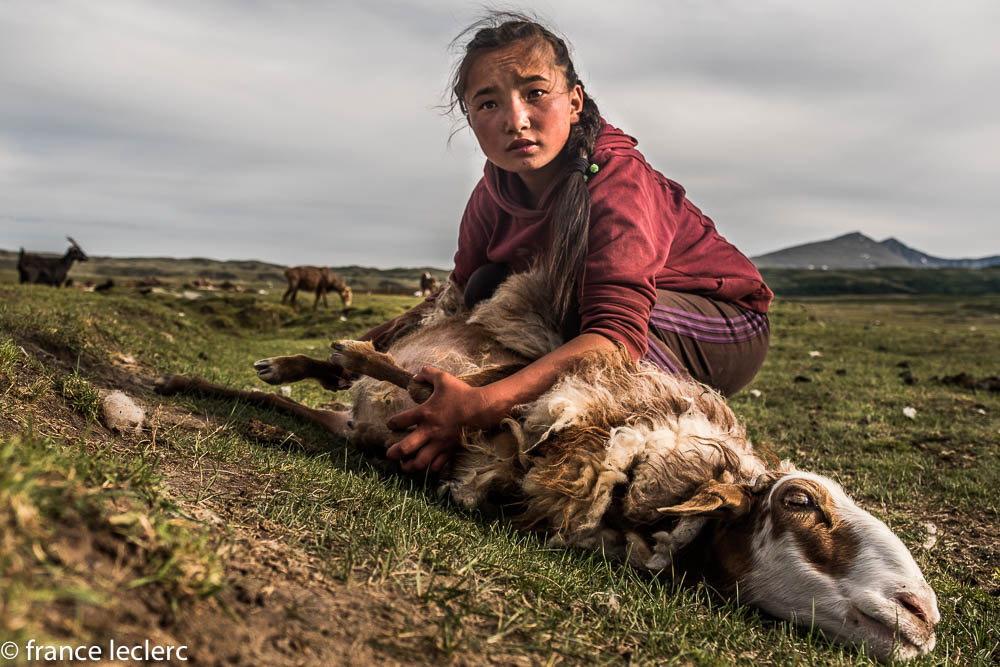 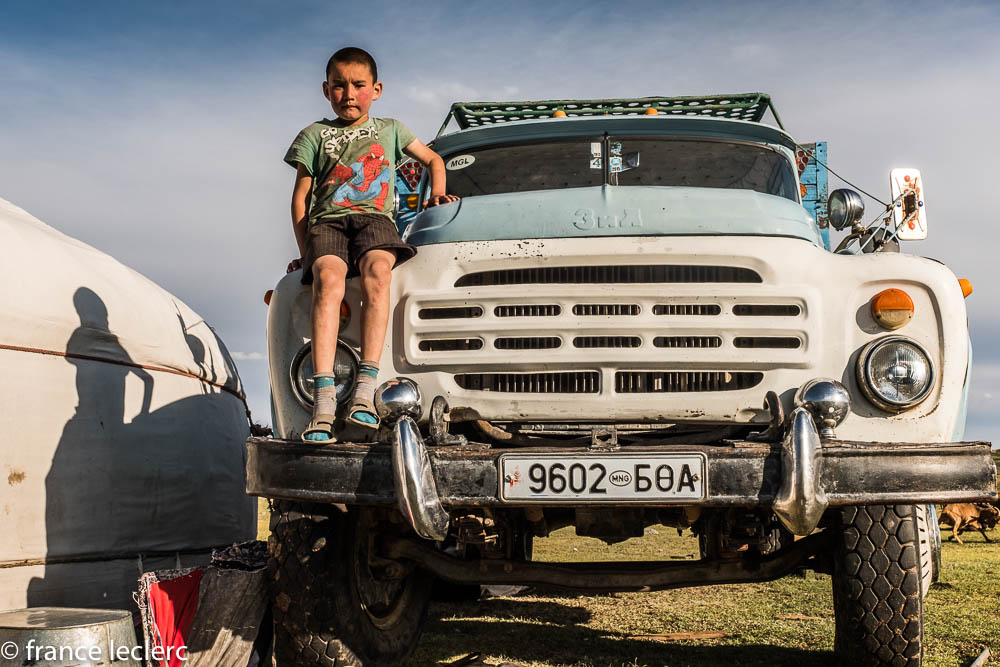 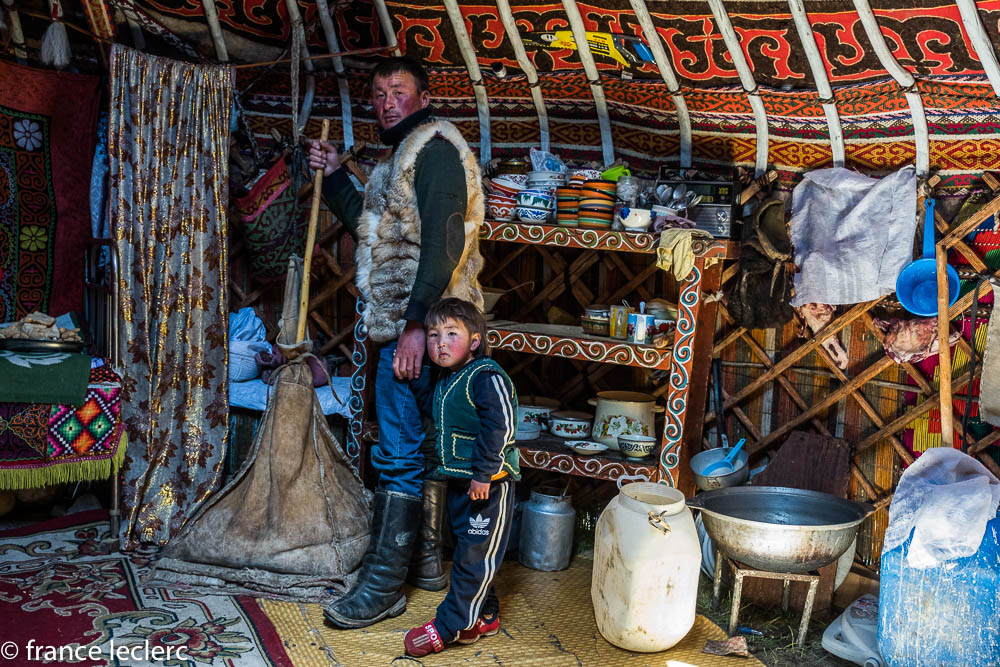 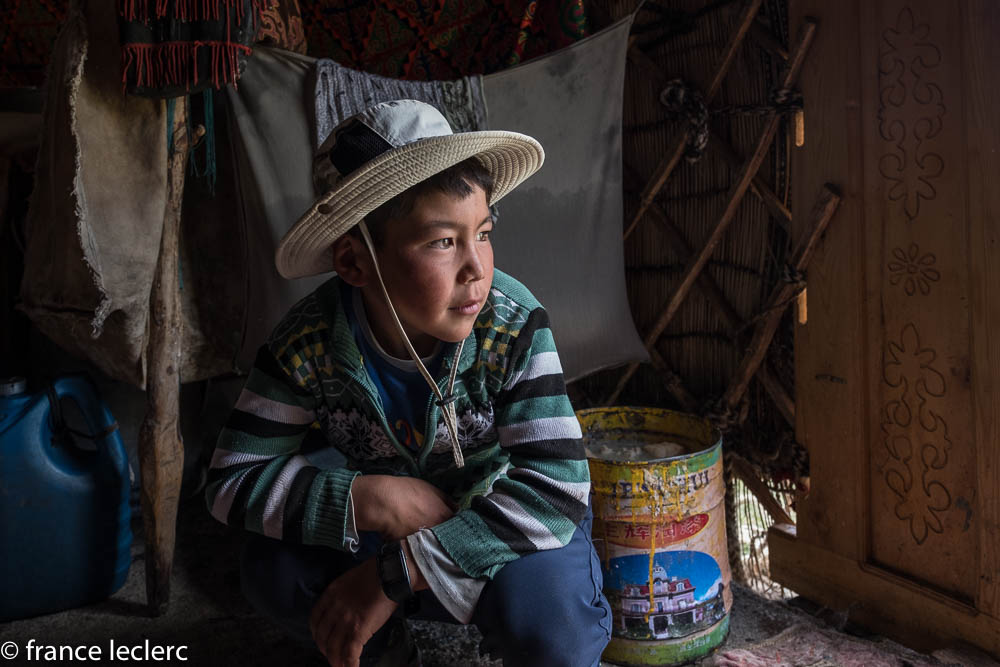 And then, of course, there is eagle hunting. Kazakhs use eagles to hunt for rabbits, marmots, and foxes and if very lucky wild wolves. Winter is the hunting season as the white snow makes it harder for the prey to hide from the eagle with its notoriously good vision. When an eagle-hunting Kazakh carries his bird, the head is often coiffed with a hood to keep the eagle quiet until it’s time to hunt. Trying to put the hood back on an eagle’s head (which obviously the bird is not thrilled about) is a feat to watch and it highlights the special relationship between the bird and its owner.   Since we weren’t there in the hunting season, our hosts kindly agree to show us their eagles and to don their hunting coat. The coats are made from fox skins collected from successful hunts. The more extravagant the coat, the more respected the hunter. Judging by his coat, I am guessing that one of our hosts, the magnificent Shokhan featured in the last few images, must be a very skilled hunter. 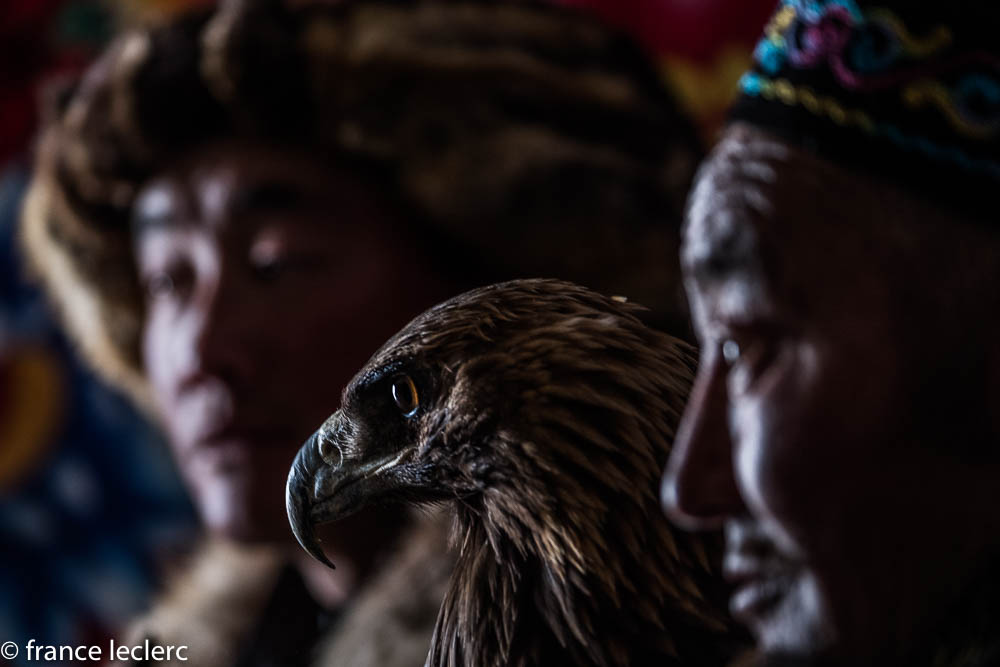 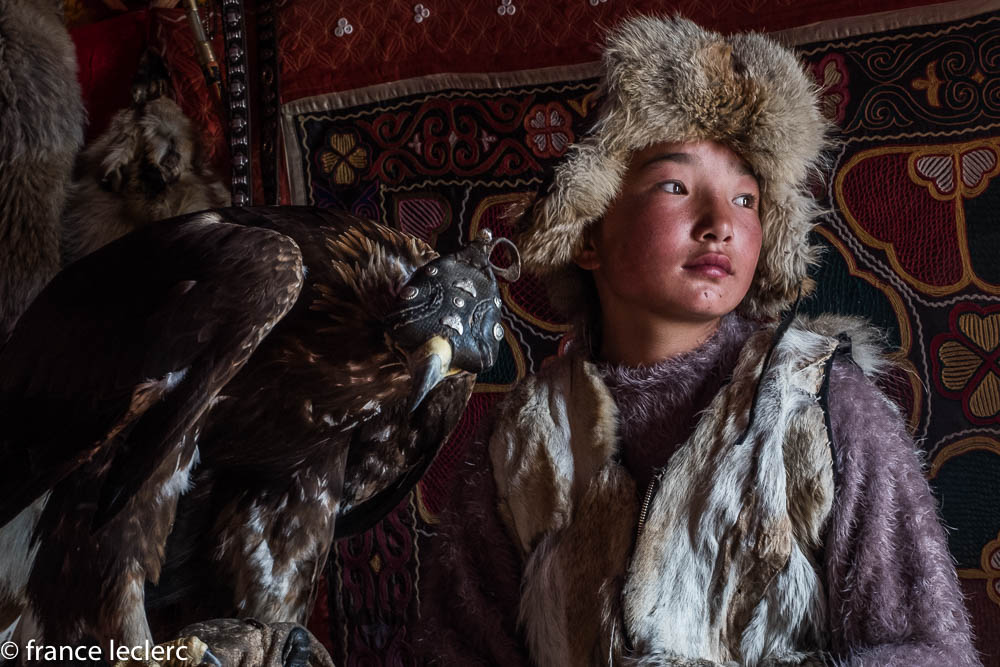 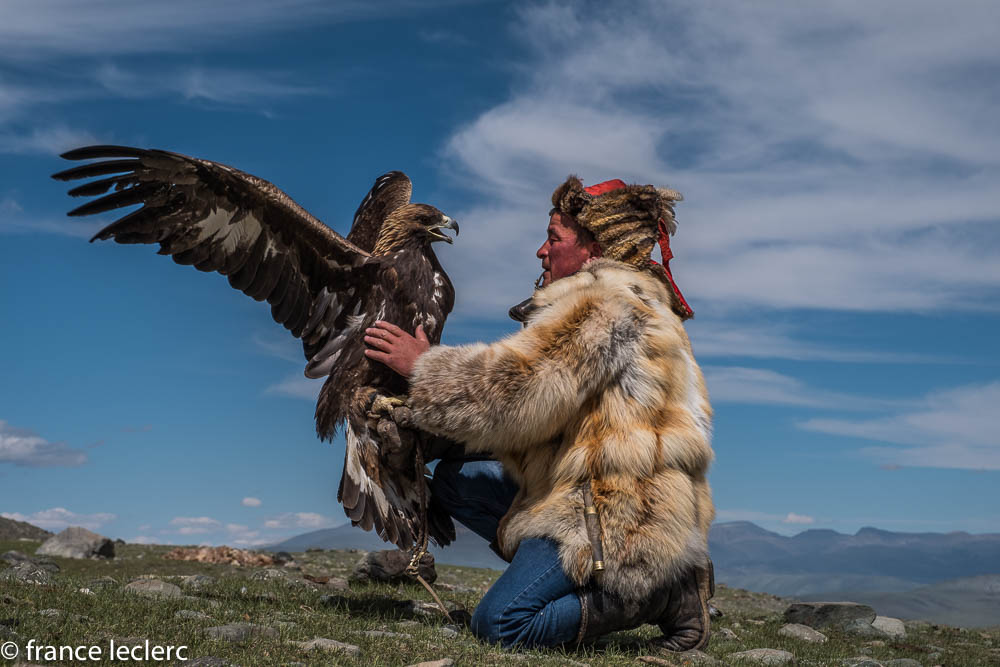 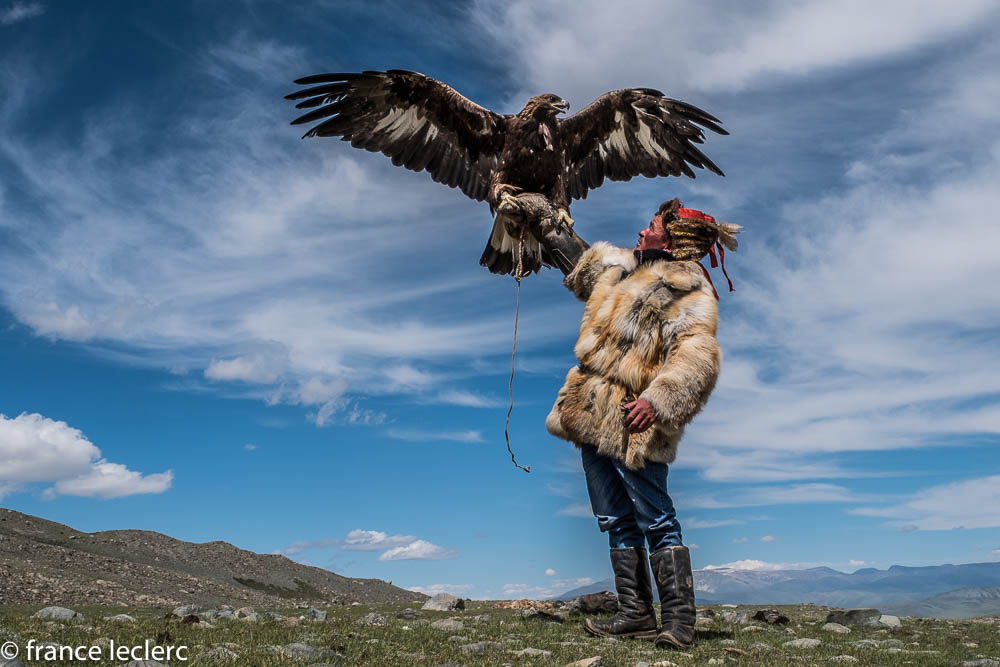 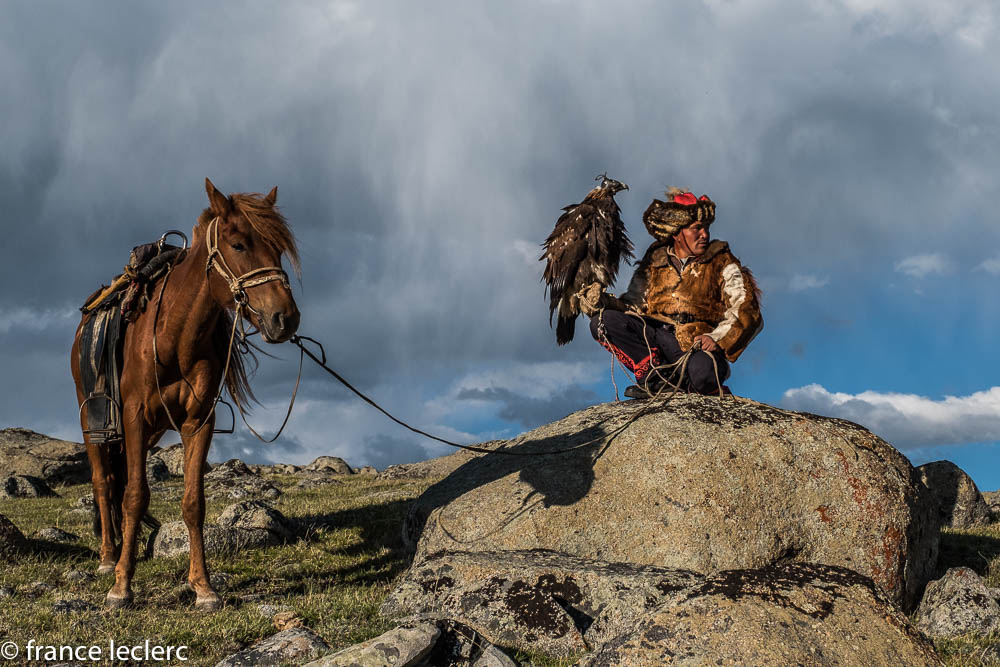 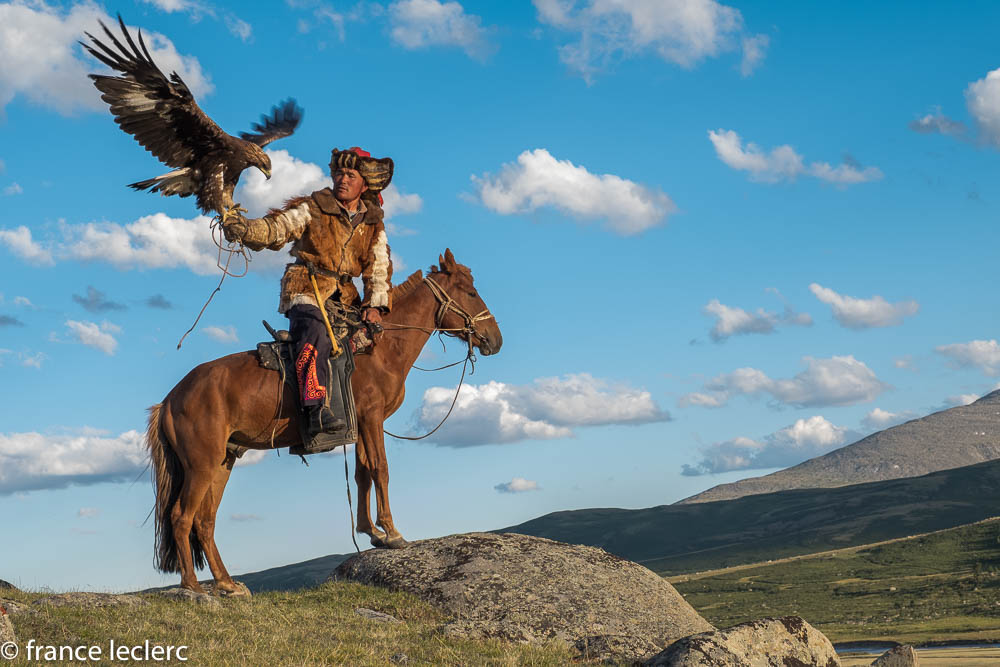 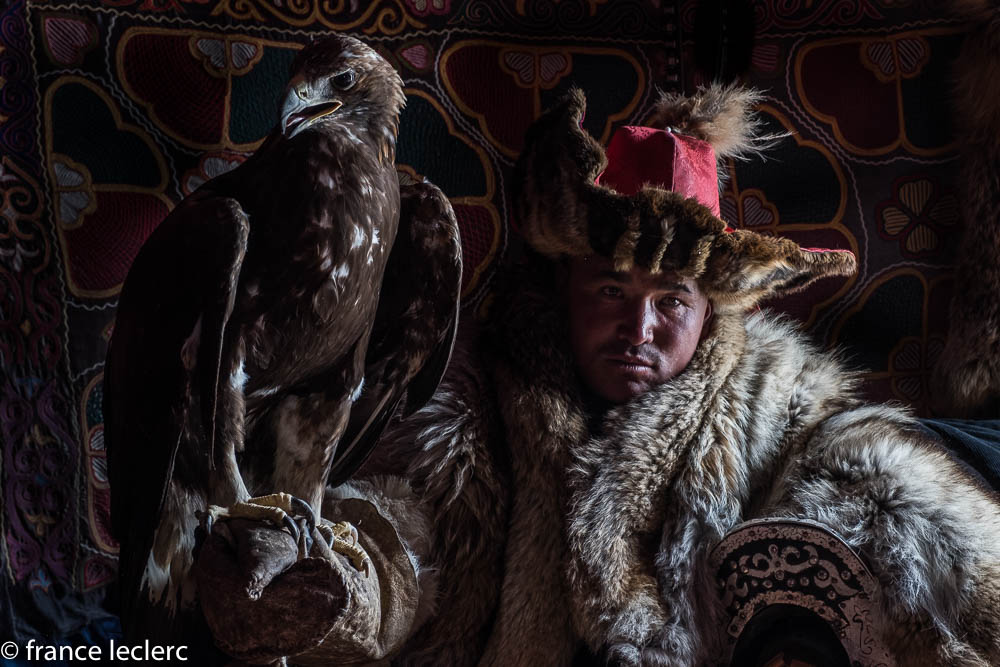 To my Kazakh friends,