A Bridge over the Omo River 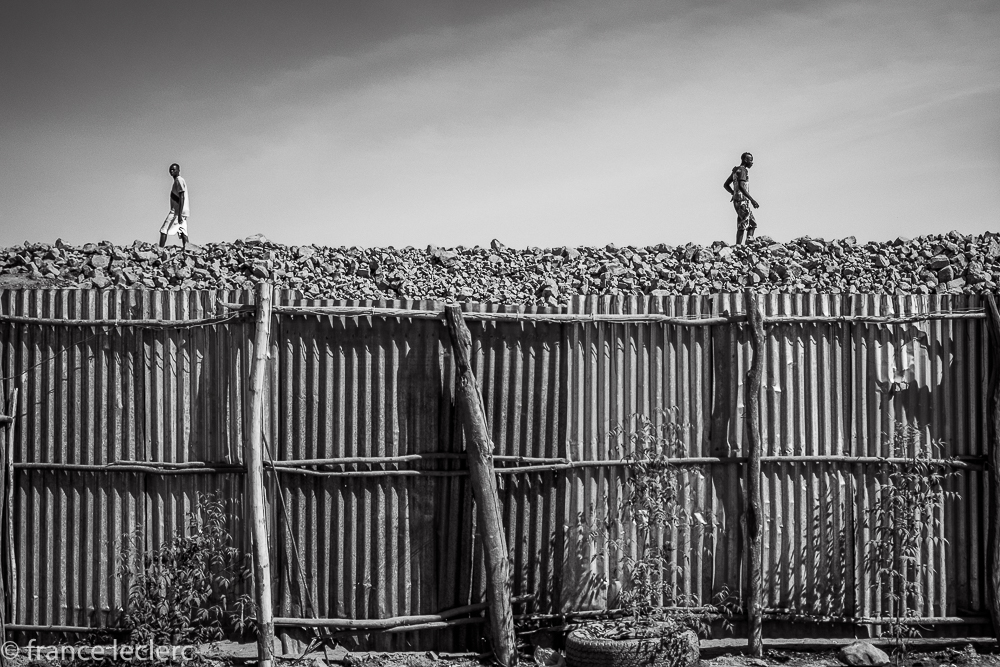 Five years ago, I went to Ethiopia’s Omo Valley to visit and photograph the native tribes (OmoValleyTribes). This year, I went back partly to see whether things had changed. In my previous post (HamarAgain), I described my recent experience with the Hamar tribe. Other than the Hamar, there were two other tribes I had visited last time that I was able to see again on this trip, the Kara and the Nyagatom. (I could not visit the Suri this year as I had on my previous trip, as this tribe is located in an area that it is now unsafe to travel).

The Kara tribe, the smallest ethnic group of the Omo Valley, lives on the Eastern side of the Omo River while the Nyagatom tribe lives on the Western side. The last visit, to get to a Nyagatom village from a Kara village, we had to cruise the Omo River for quite a while and walk inland about two miles. Now I was told that there was a bridge, still under construction but functional. I couldn’t help wondering whether having an easier way for the tribes on each side to connect would help or hurt their relationships.

On my last visit, I was able to spend quite a bit of time with the Kara (KaraTribe) and the Nyagatom (NyagatomTribe), but this year my visit was a lot shorter. As we made our way to Dus, one of the Kara villages I had visited last time, I noticed that there was a highly noticeable change. Much of the tribal land had been transformed into cotton plantations. Yes, cotton! The government is apparently partnering with multinational companies in the cotton industry and there were now cotton fields as far as my eyes could see. Again I wondered what kind of impact this would have on the life of the local tribes. As we arrived in Dus, the village looked the same except for two things. It was basically deserted and a huge temporary food dispensary was on the premise. For the past two years, Ethiopia has been experiencing a severe drought and food is quite scarce. (I am sure the fact that their land has been transformed into a cotton plantation doesn’t help.) Thankfully, various NGOs are trying to provide some relief. In addition to the food dispensary, a water pump and a simple irrigation system had been installed closer to the river so that food (mostly sorghum and maize) could be grown. When we arrived everyone was already working which is why the village was empty. So off we went to visit the “Farm”.

Being aware of the food shortage, we had brought 3 bags of grain for the Kara as a gift (well it ended up being more like 2 ½ bags as one of the bags got pierced en route and we left a trail of grain behind our vehicle. Unlike Hansel and Gretel though we had not planned to leave a trail to find our way back, but in retrospect, we clearly should have, as we got lost). When we arrived at the “Farm”, as they had done for us on my previous visit, the Kara performed a dance as a sign of appreciation for our gifts. The Kara women were dressed in beautiful skirts made of goatskin that are slightly longer in the back, with their hair short and typically shaped into what look like beads. Men were also dressed traditionally, and carried their borkoto, the small stool they have with them at all times in case they have a desire to sit– even while dancing! The dance was a treat to watch, even though it was extremely dusty. 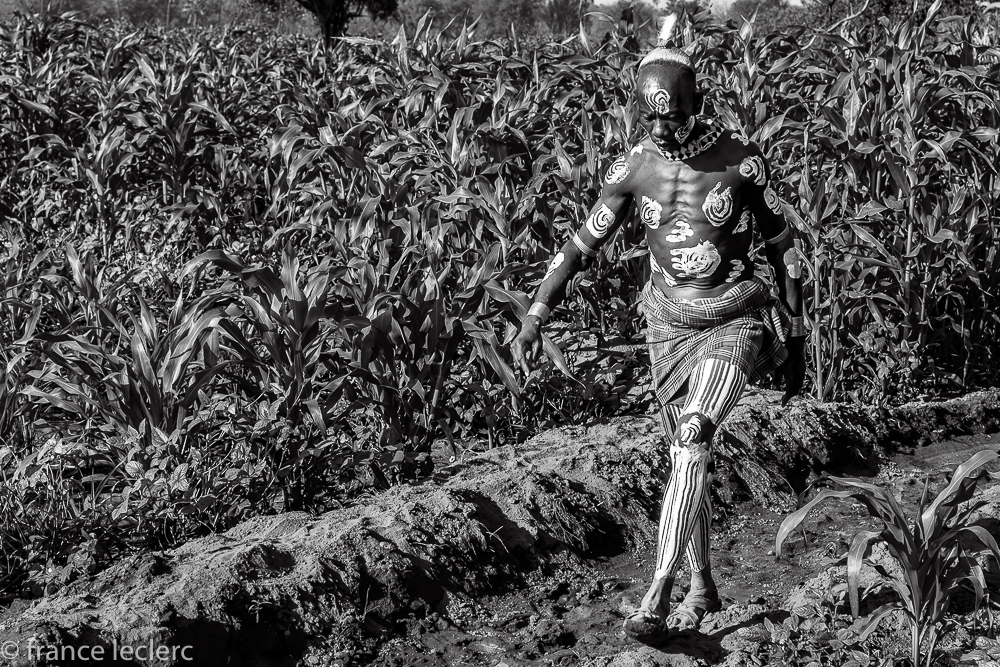 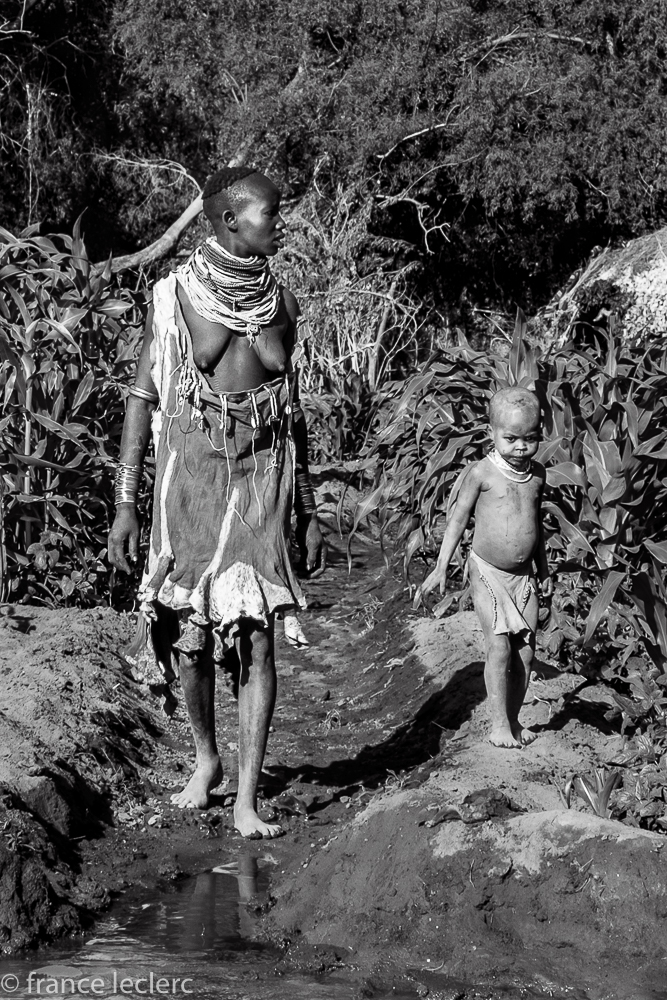 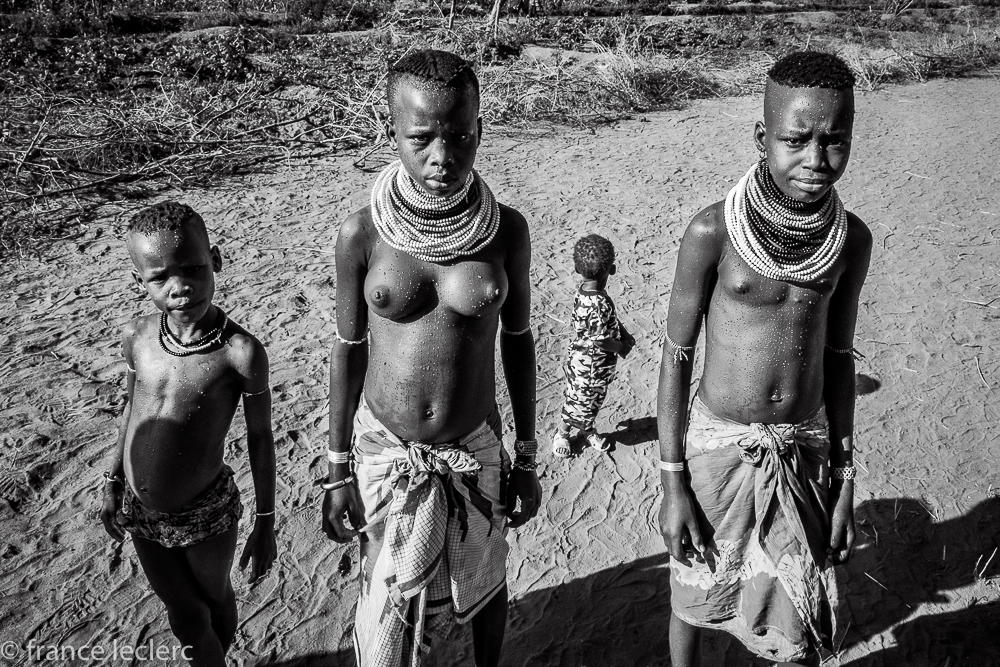 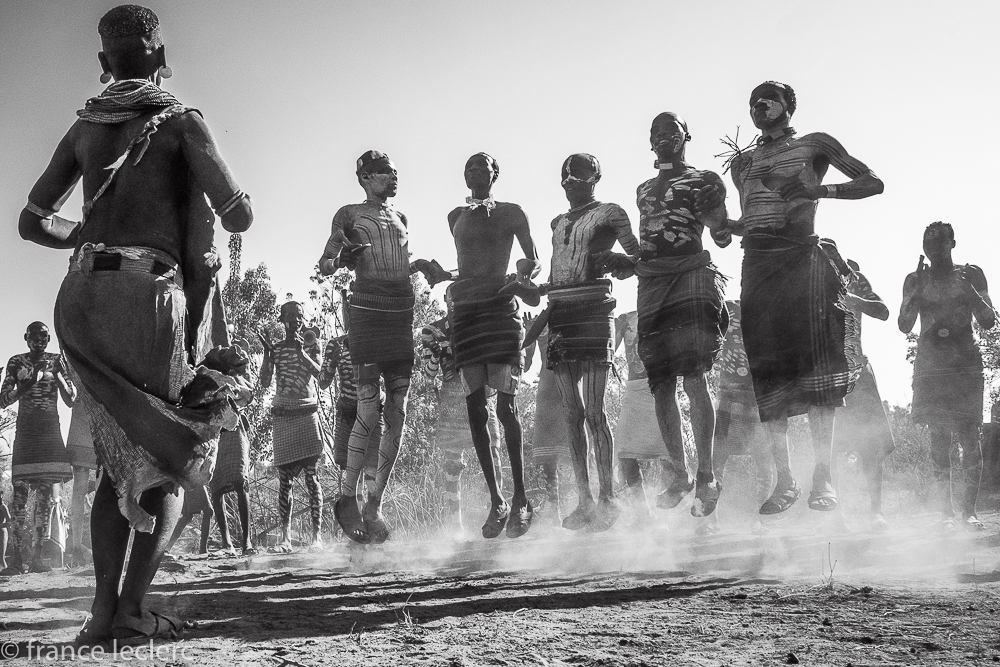 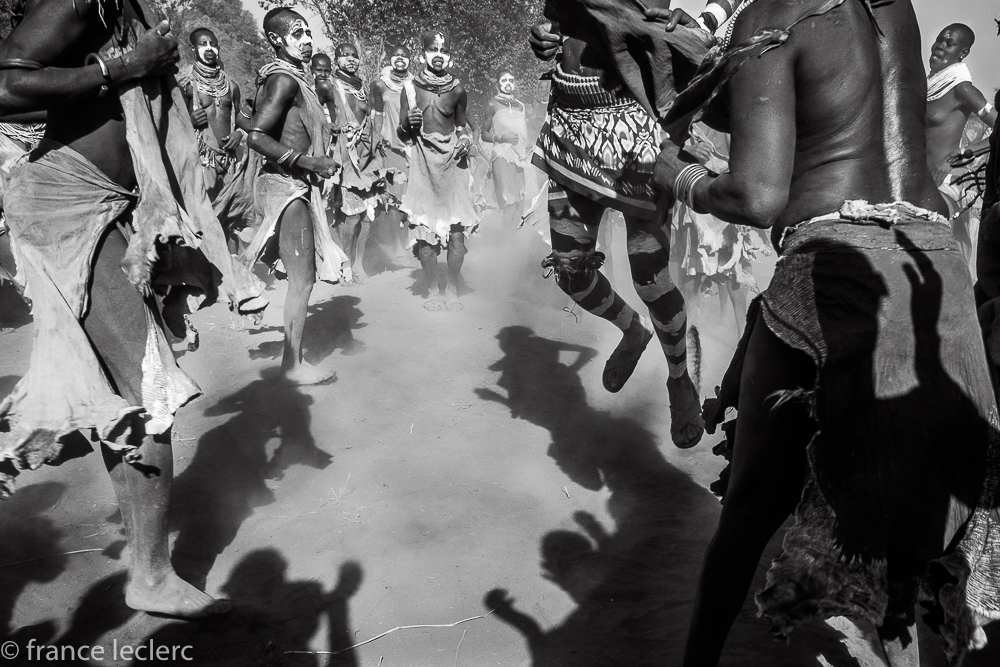 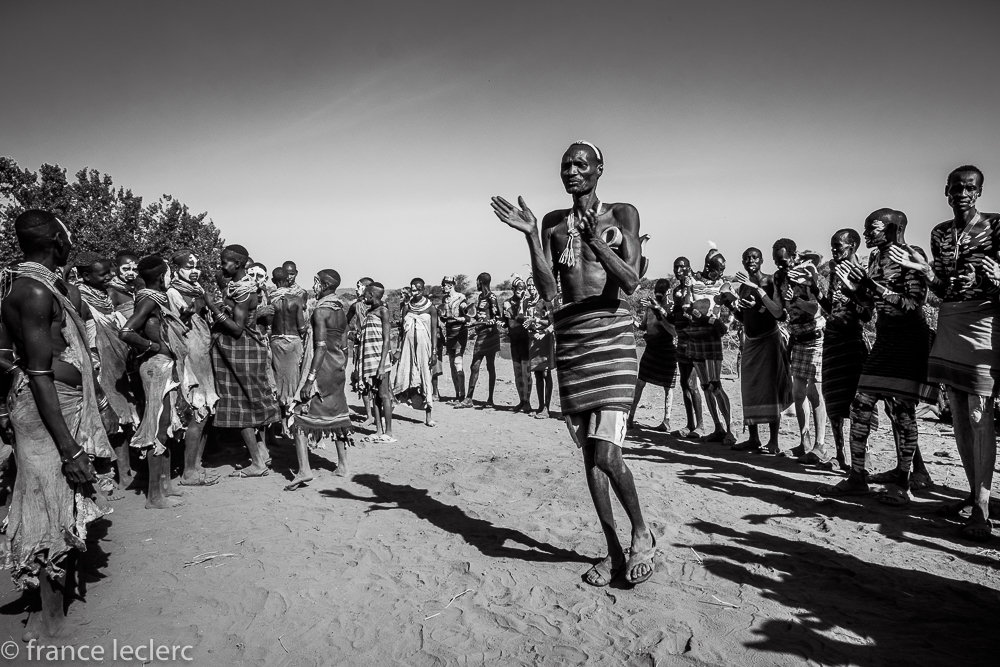 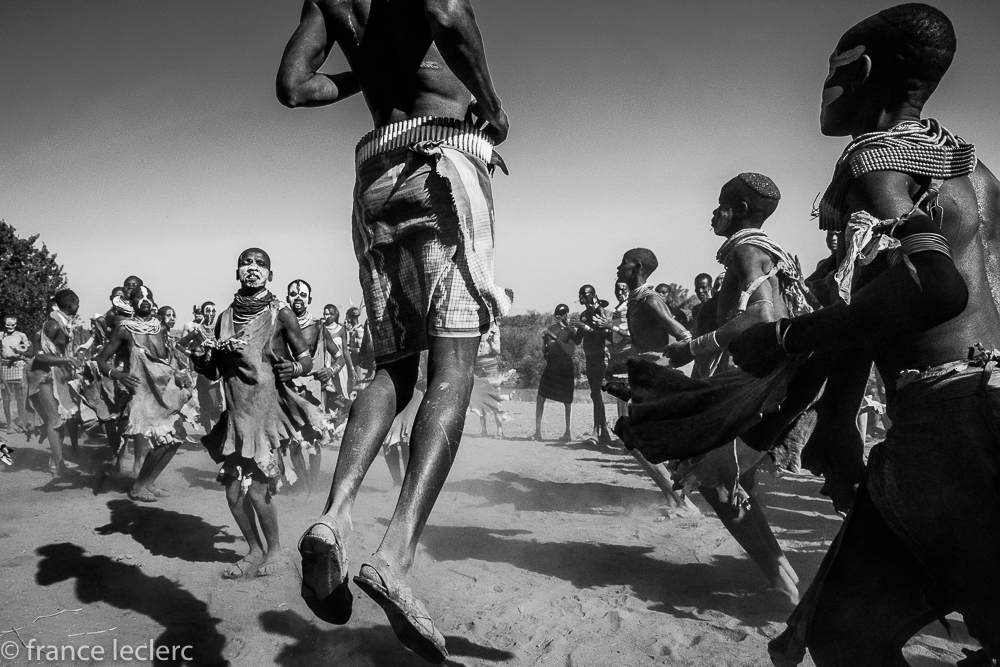 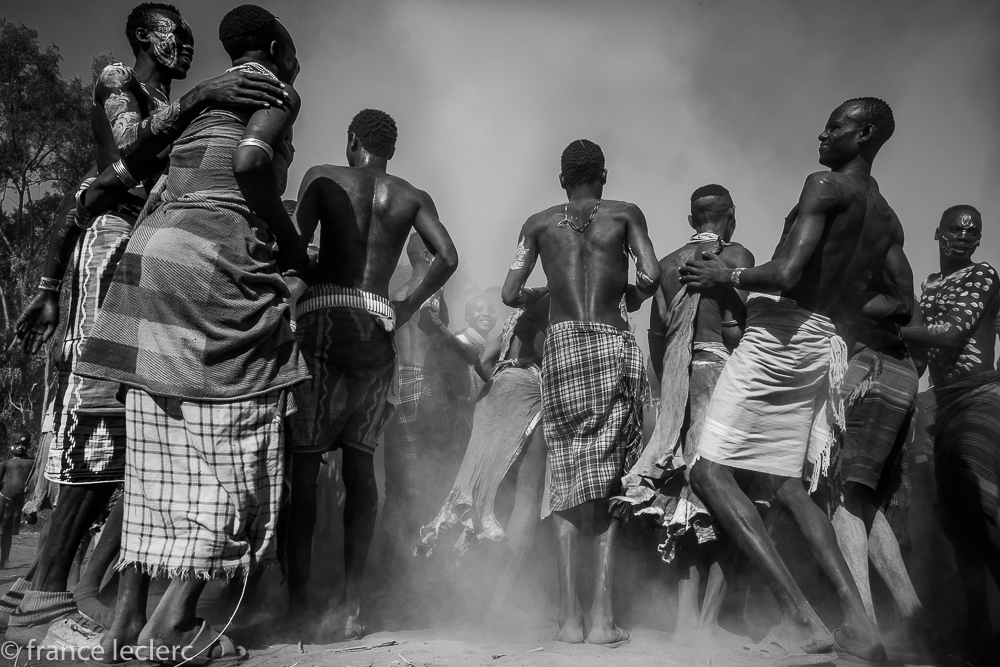 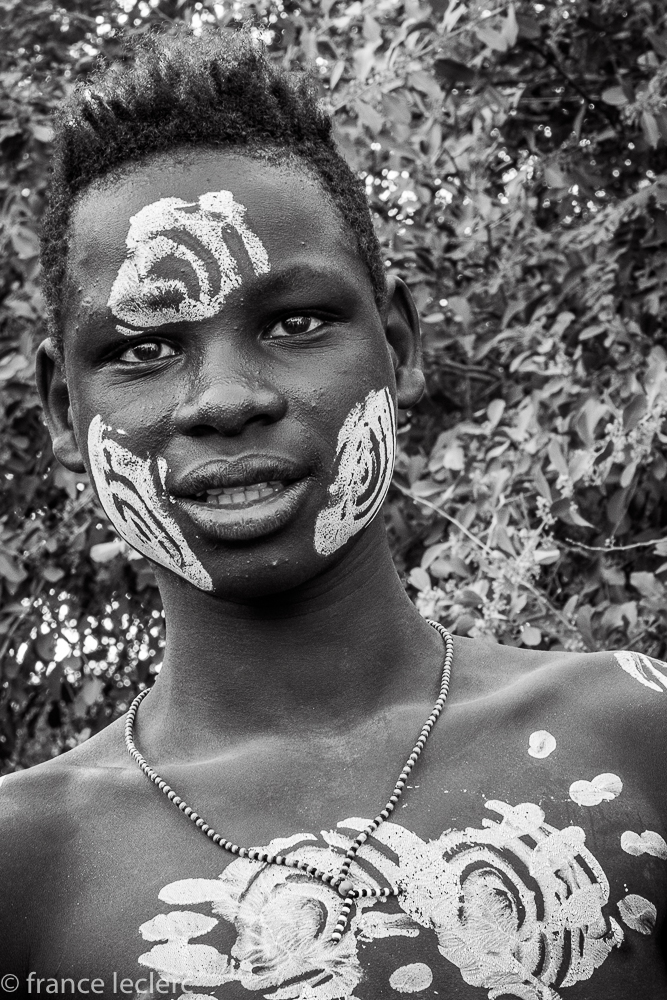 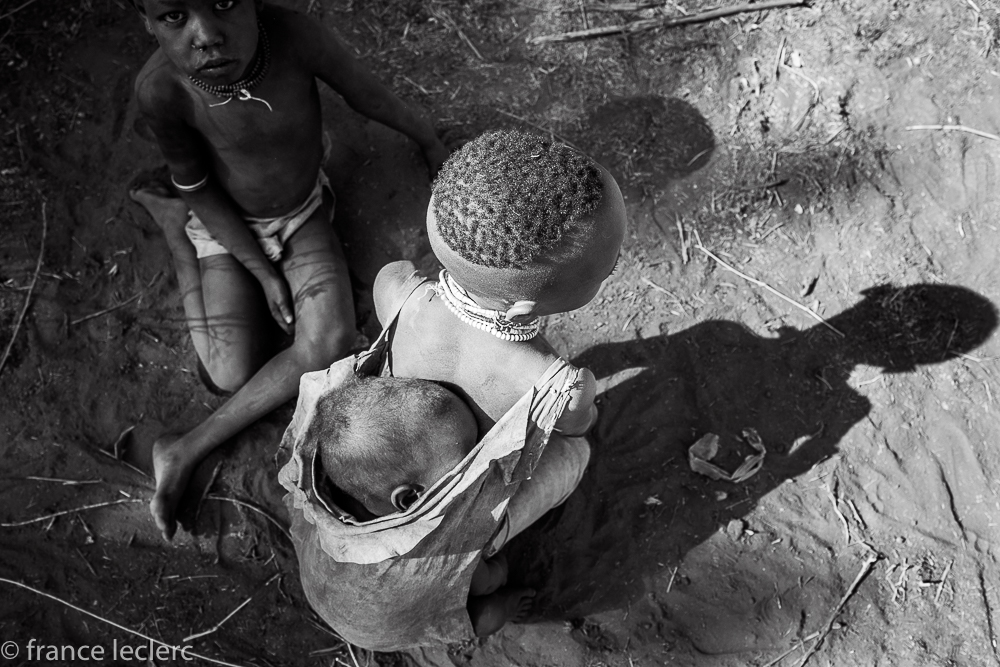 To see the Nyagatom, we crossed the new bridge and drove to a nearby village, a different one than the one I had visited five years ago. To adorn their long and lean bodies, most Nyagatom women still wear numerous necklaces and long skirts, some made of goatskins. But unlike in my previous visit, this time though, a number of women were sporting skirts made of fabric. The children were very friendly, but some of the grown-ups a little more tentative. Here too, the women were cooking with very little in the way of ingredients; the food situation looked alarming to me. 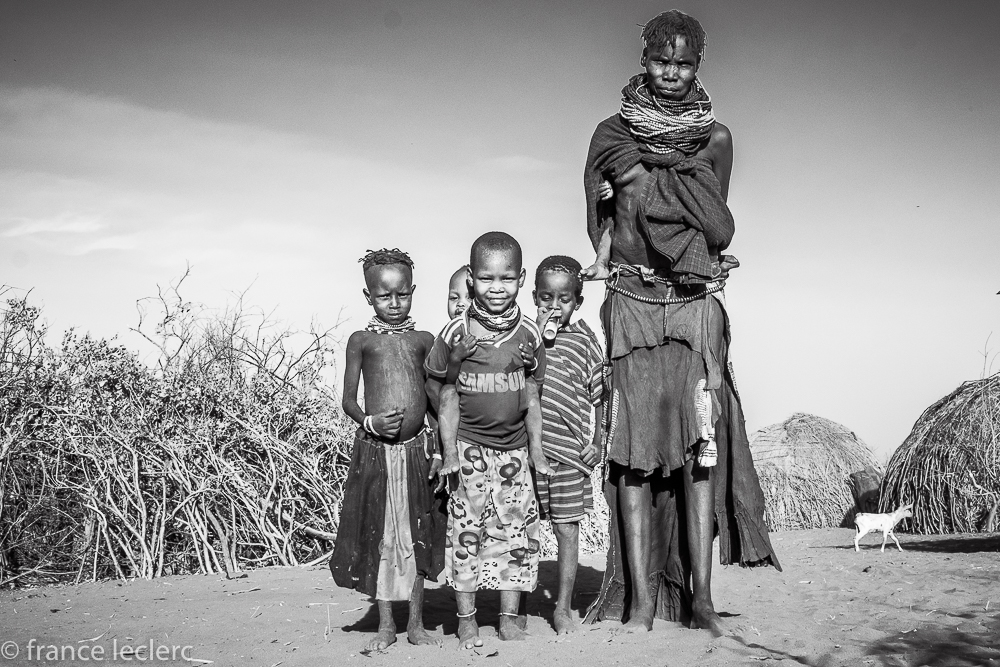 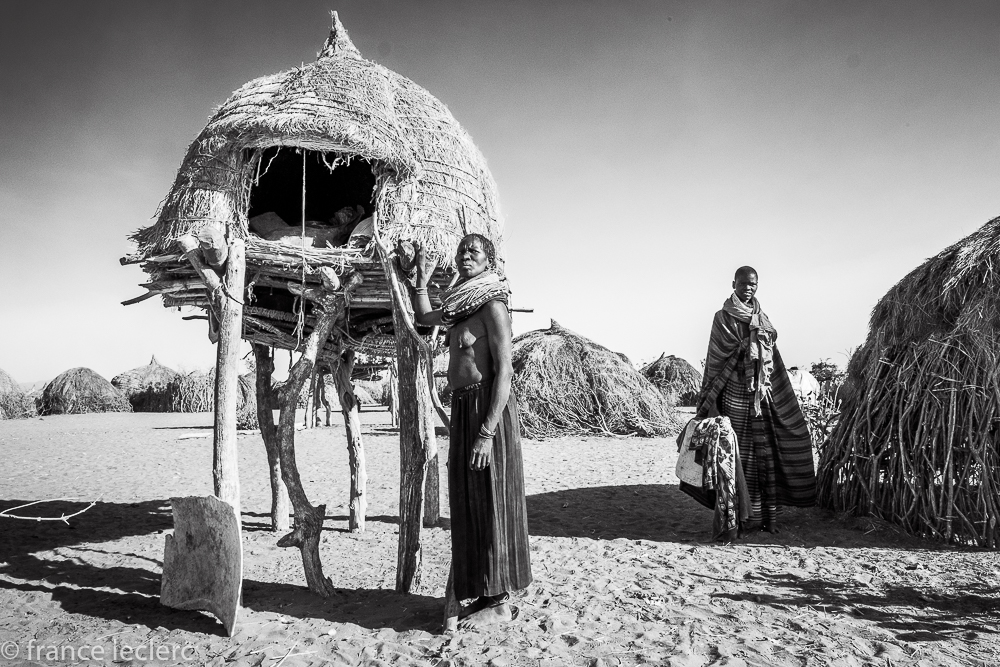 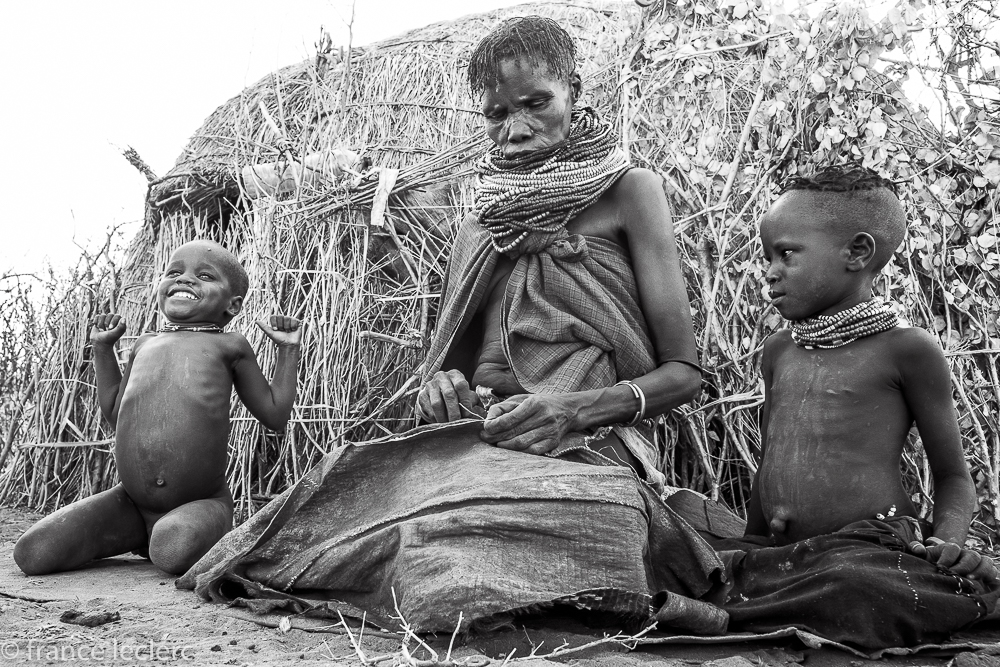 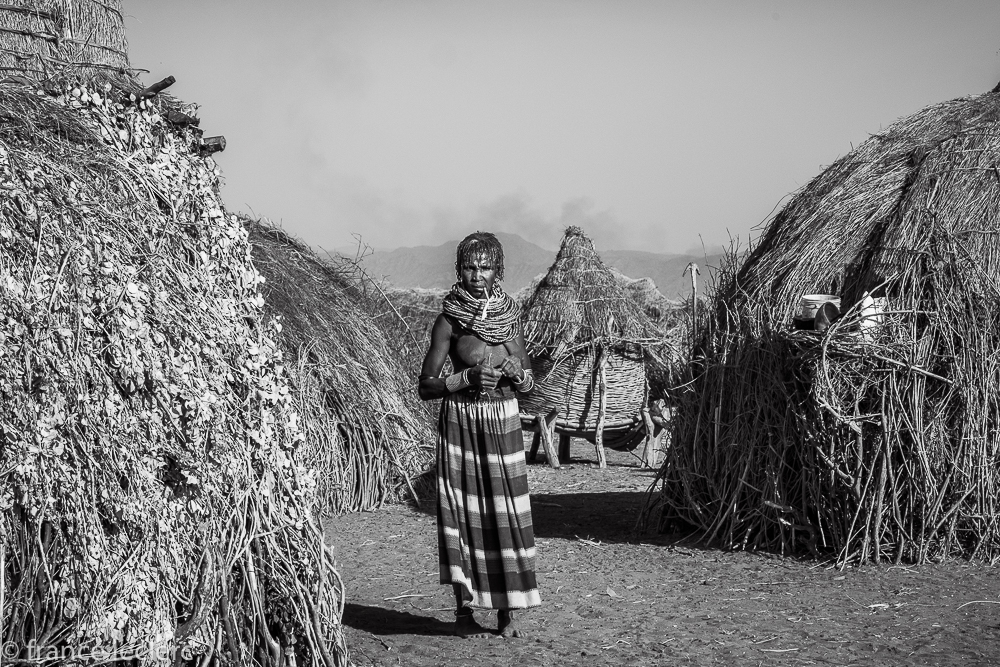 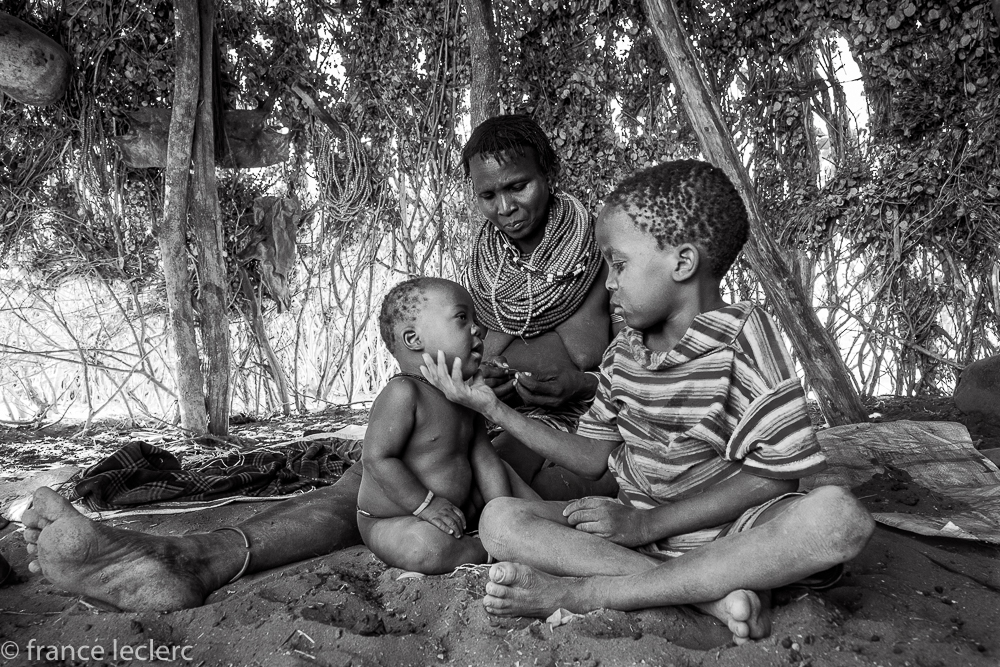 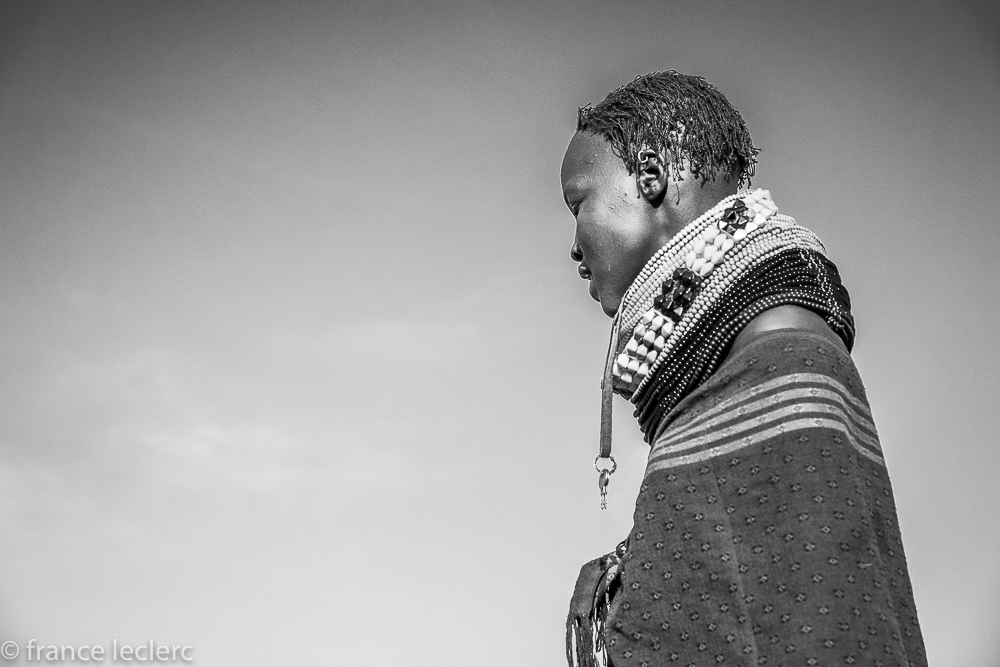 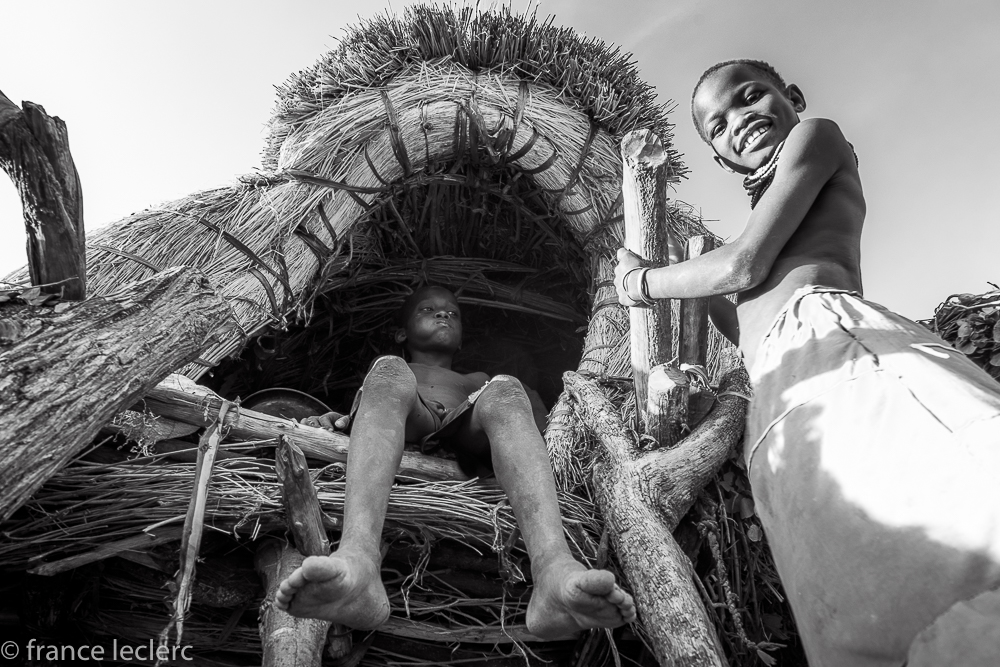 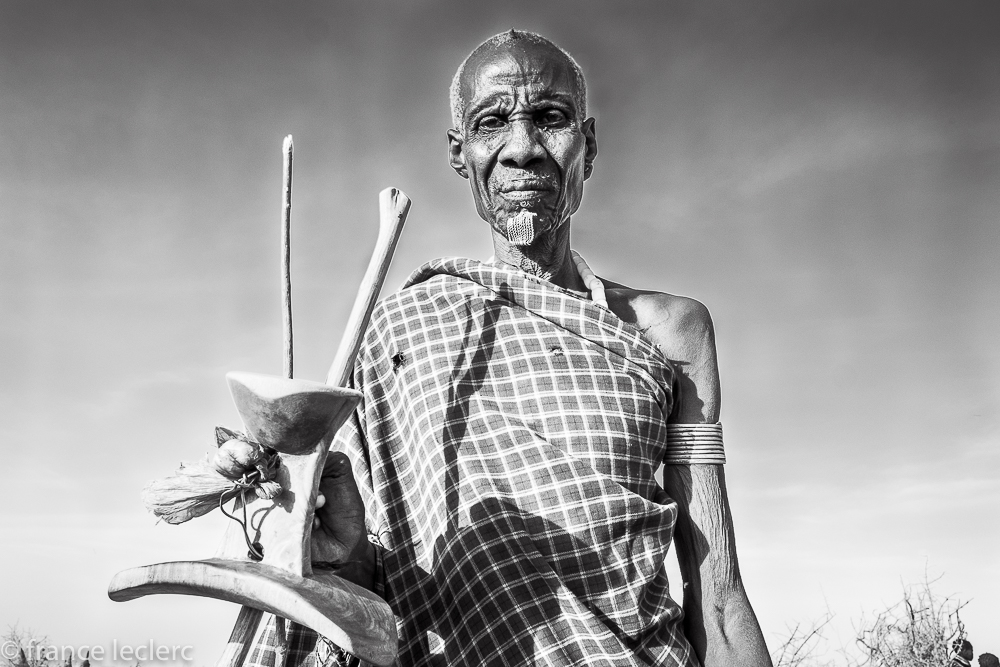 So here again as for the Hamar, I did not think the tribes had changed drastically though one could clearly see the influence of the modern world. (I am fully aware that this conclusion could be far off from reality as it is based on a very short visit –so small sample, for those so inclined–, though my thinking was that if there were dramatic changes, I would probably see them). The most noticeable change though was probably food scarcity, which is becoming a very serious problem. As for the relationship between the tribes, sadly two weeks after being back, we learned that some people from the Nyagatom tribe had sneaked into Dus, the Kara village we had visited, and attempted to steal food. Gunshots were exchanged and one of the Kara tribe members that had been such a gracious host (and a stylish dancer in some of these images) was shot in the chest. Thankfully he was able to get medical help and is now back in his village hoping that one day we come back and visit again.