A Timkat Celebration in a Small Town in Ethiopia 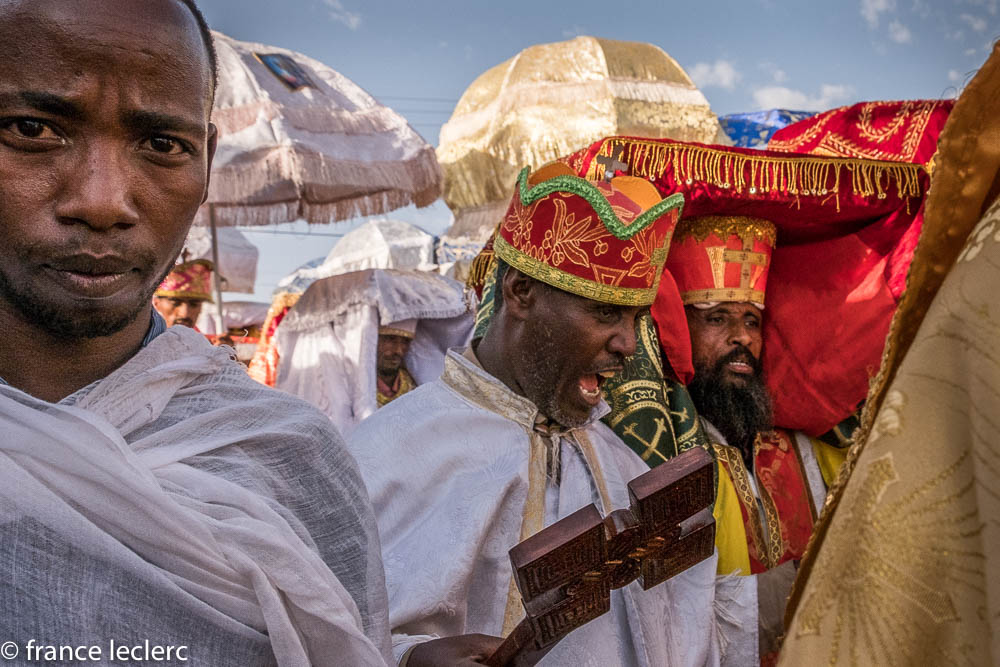 I went back to Ethiopia this past January, 5 years after a previous trip in late 2012. The main purpose of both trips was to visit with the tribes of the Omo Valley, but this last time I was there during Timkat (also Timket or Timqat), the observance of Epiphany, a religious festival celebrated with much zeal in Ethiopia. Meaning baptism in Amharic, Timkat commemorates the baptism of Jesus in the Jordan River and is best known for its ritual reenactment of the event. The cities of Addis Ababa, Gondar and Lalibela are famous for their Timkat celebrations, which attract many locals and throngs of visitors, but my Timkat experience was in a small town, Yirgalem, 5 hours south of Addis Ababa.

Quite simply, the main point of the festival is for the priests to bring the Tabot, a model of the Ark of Covenant which is present on the altar of every Ethiopian church (as you may remember from â€œRaiders of the Lost Arkâ€, the Ark of Covenant is believed to hold the Ten Commandments) to a nearby body of water on the eve of Epiphany. At dawn the next morning after a night of prayers, the water is blessed and sprinkled on the devotees, symbolically renewing their baptismal vows. The Holy Ark is then escorted back to its church. Simple in theory but in Ethiopia, this is done with much pageantry and festivities, even in a small town.

Ethiopians are quite religious and over 40% of them identify themselves are Christian Orthodox so even a small town like Yirgalem has many churches. On the eve of the festival, every church gets ready to bring their Tabot to a central location that has a body of water, in the case of Yirgalem, a cross-shaped cement pool. Trying to witness these preparations, I went to a small church in the middle of town honoring Saint-Michael. There the pilgrims (the women being mostly covered in white shrugs) were quietly sitting in front of the church. Inside, the clergy and a number of young boys were getting dressed in colorful garbs and sitras (religious bells), and makanya (walking sticks) were distributed. The Tabot was wrapped in rich embroidered silk cloth (it is considered too sacred for anyone to gaze at it) for the priest to carry reverently on its head. Young boys were responsible to hold a large image representing the church they belong to. Each church had a similar delegation and all of them met as the procession made its way through town with large crowds chanting, and dancing on the rhythmic sound of their drums. Large colorful umbrellas were used to protect the Tabot. 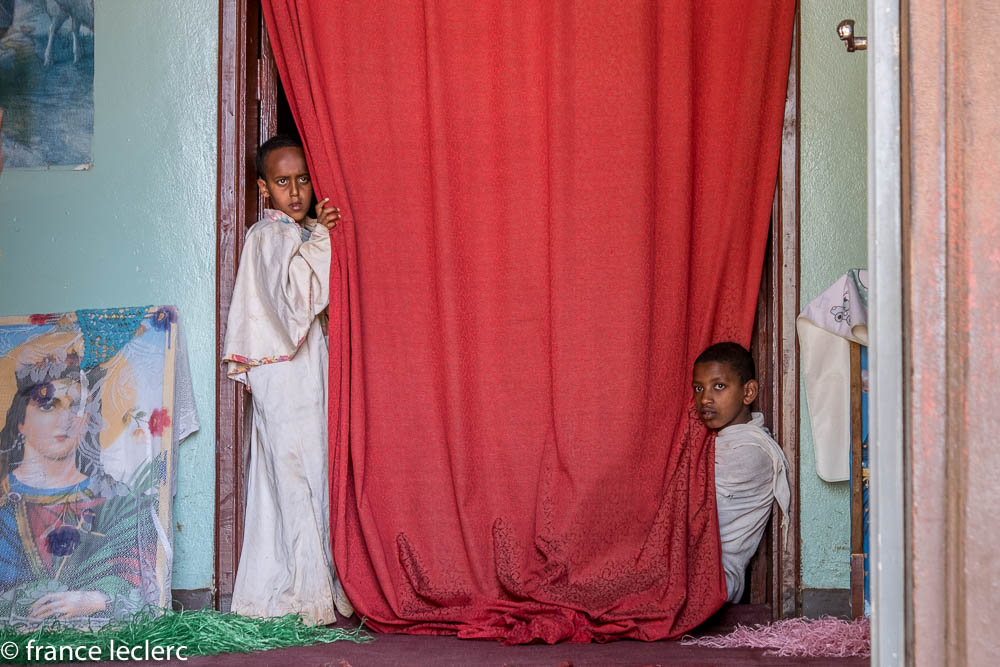 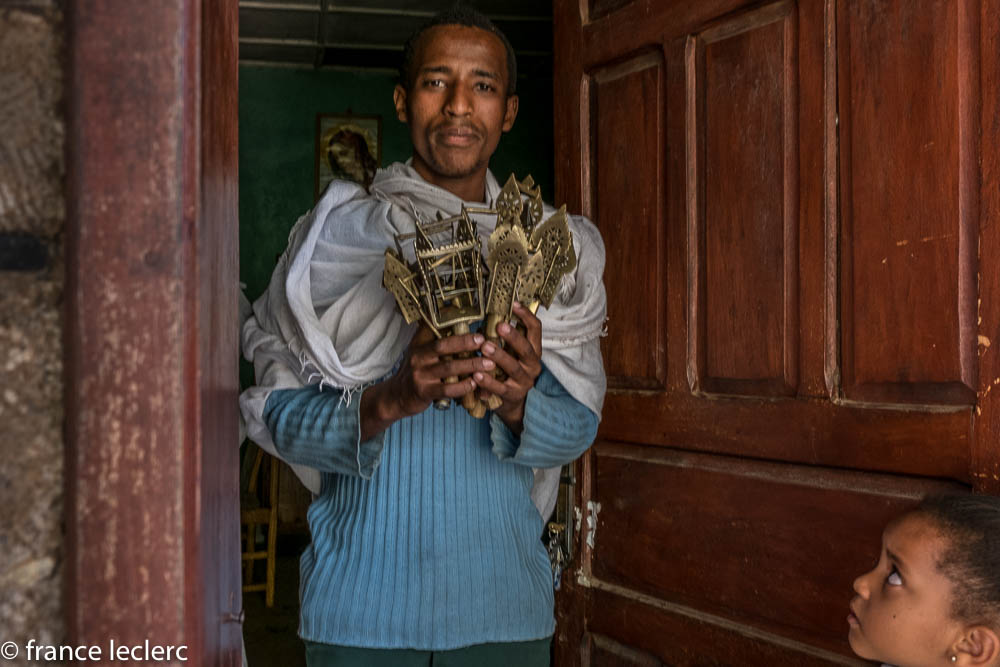 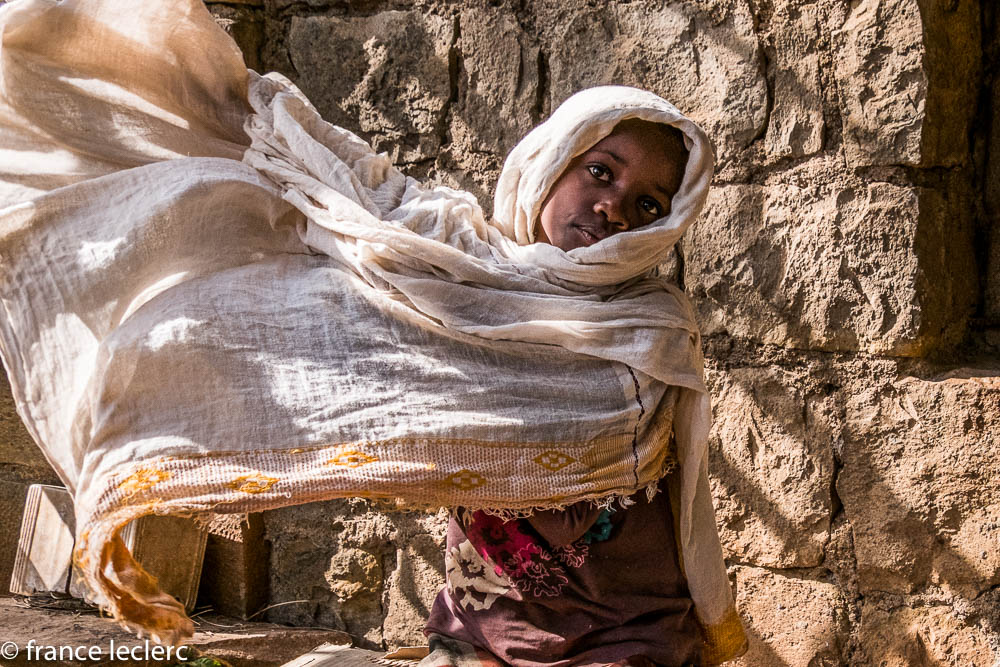 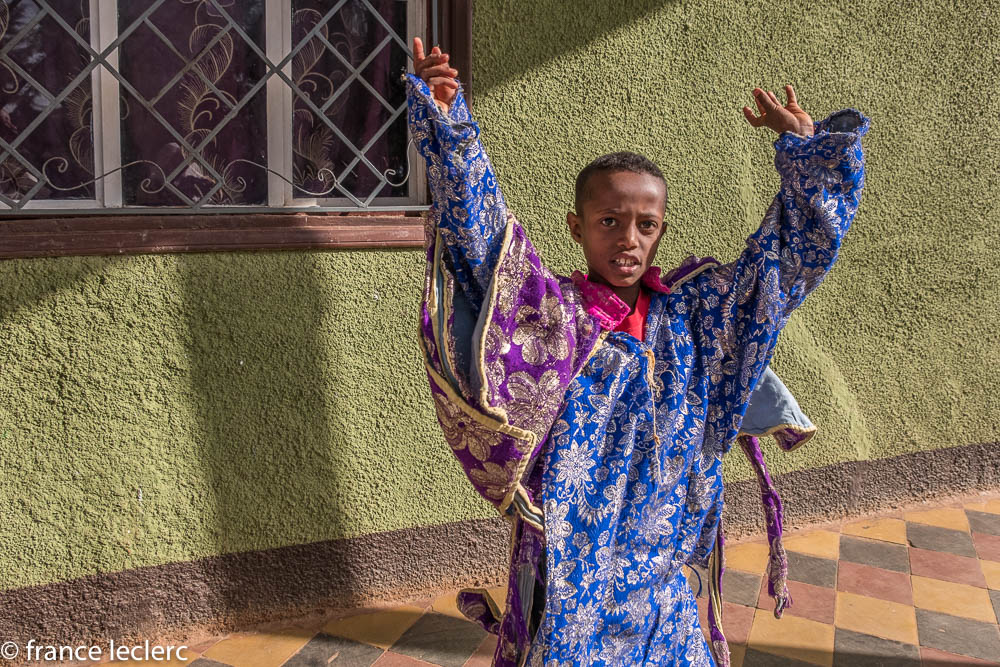 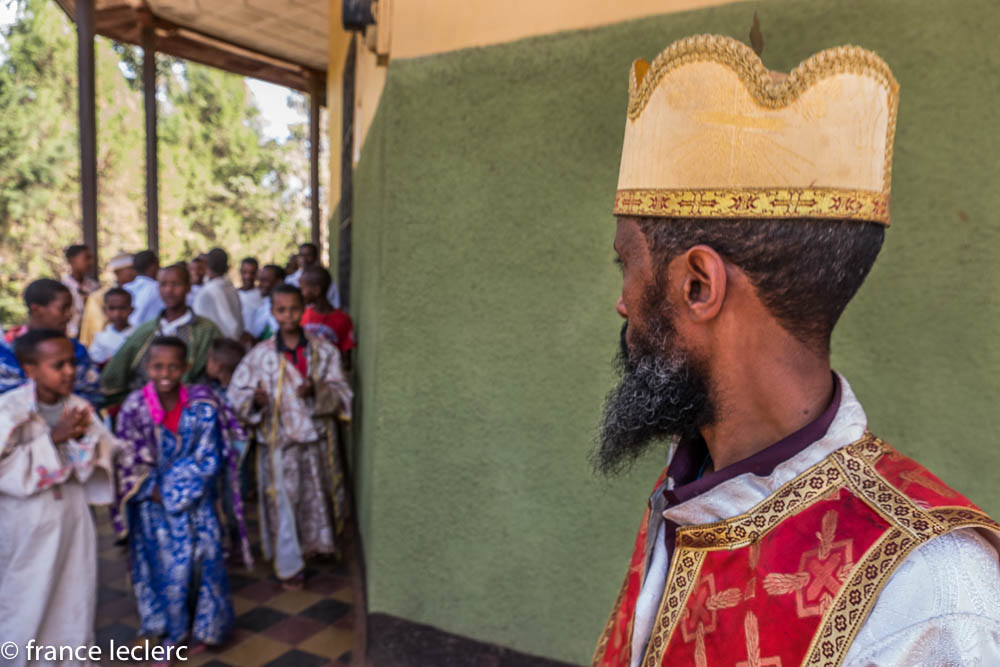 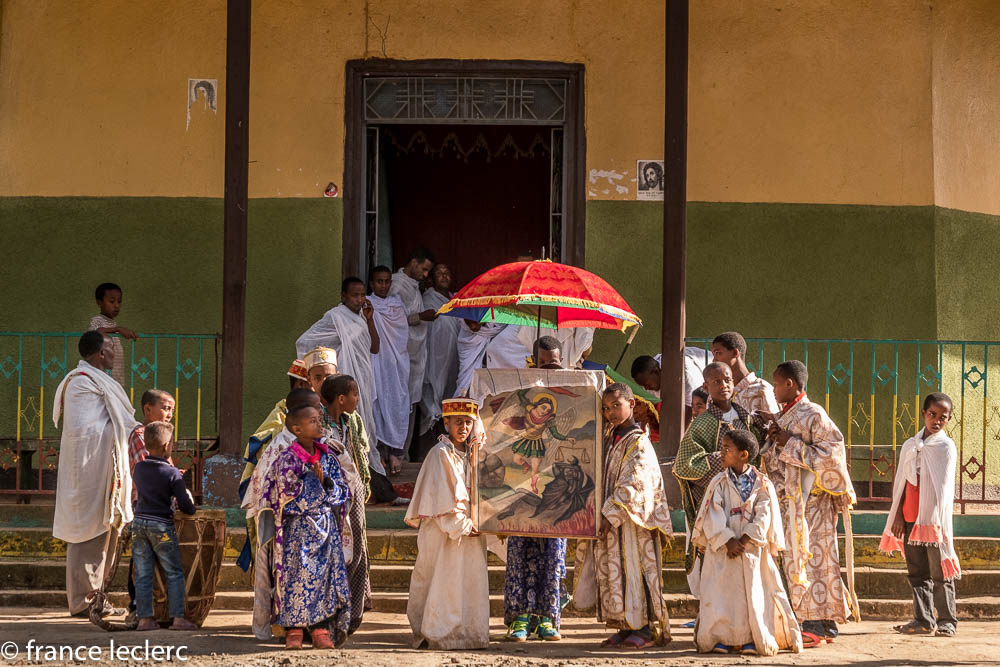 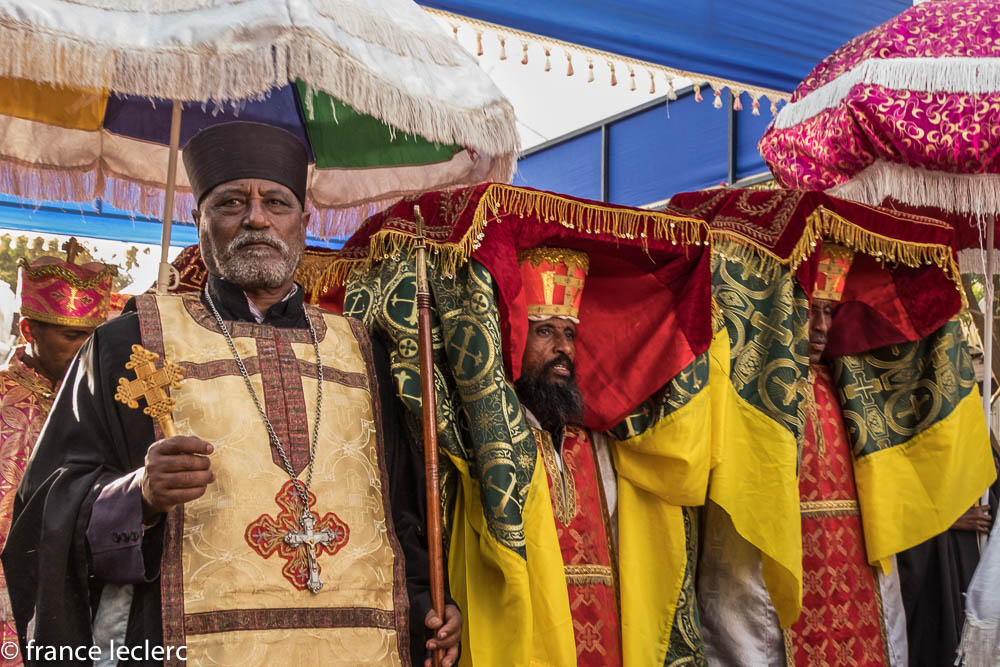 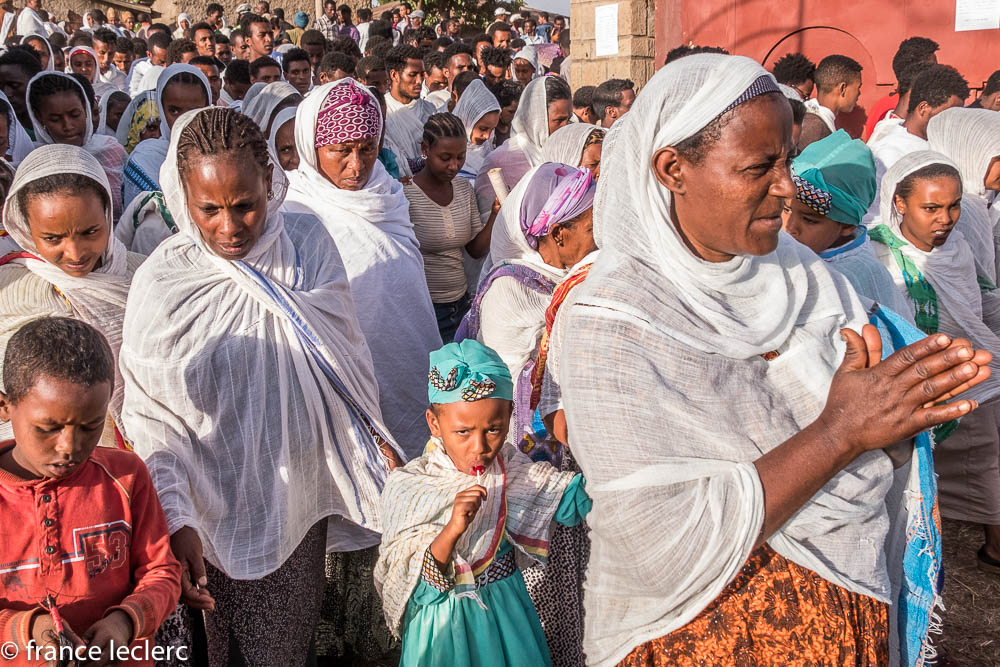 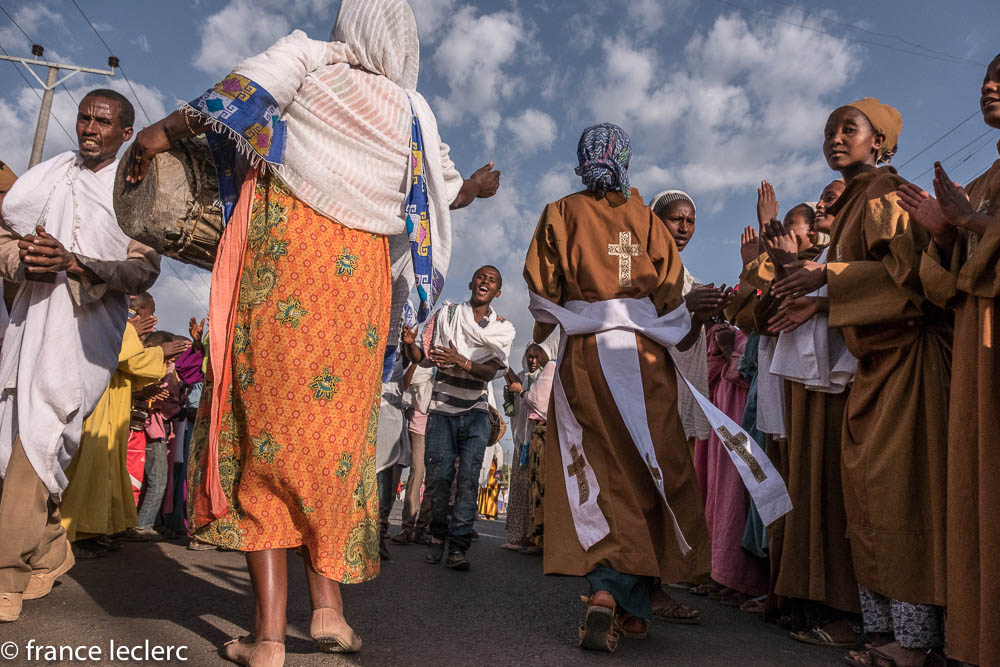 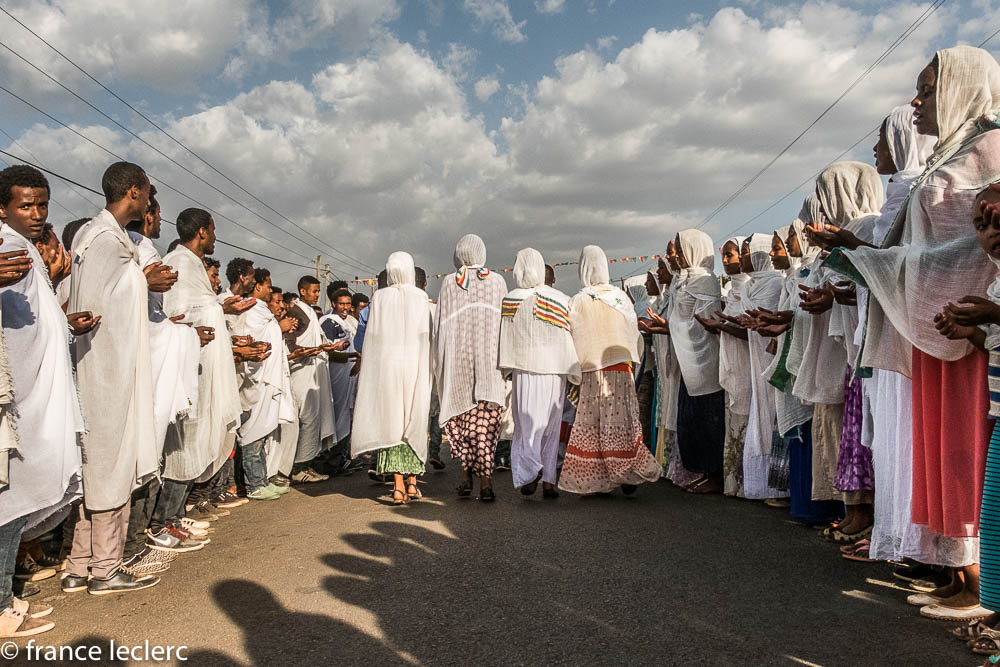 The priests and the monks then stayed at this central location to pray the entire night. Though a number of pilgrims stayed with them thru the frigid night to be close to the Tabot, I joined many other pilgrims in choosing to go back home for the night and return before dawn the next morning. In the morning, the prayers went on for a very long time (now I know why many people carry a walking stick, it provides something to rest on during the long prayers). When the sun started to rise, the clergy slowly made its way to the pool area. As a way to bless the water, a large cross was dipped into the pool. At this point, I was wondering how they could possibly baptize the entire crowd. Right then, a hose was brought forward and everyone in the crowd was sprayed including yours truly (not quite the baptism I was expecting but certainly an efficient way to do it). Finally, the wet crowd erupted in loud cheers and, after more prayers, the Holy Ark was taking back to the church in a procession similar to the one from the previous day. Then it was time to go home for a feast. 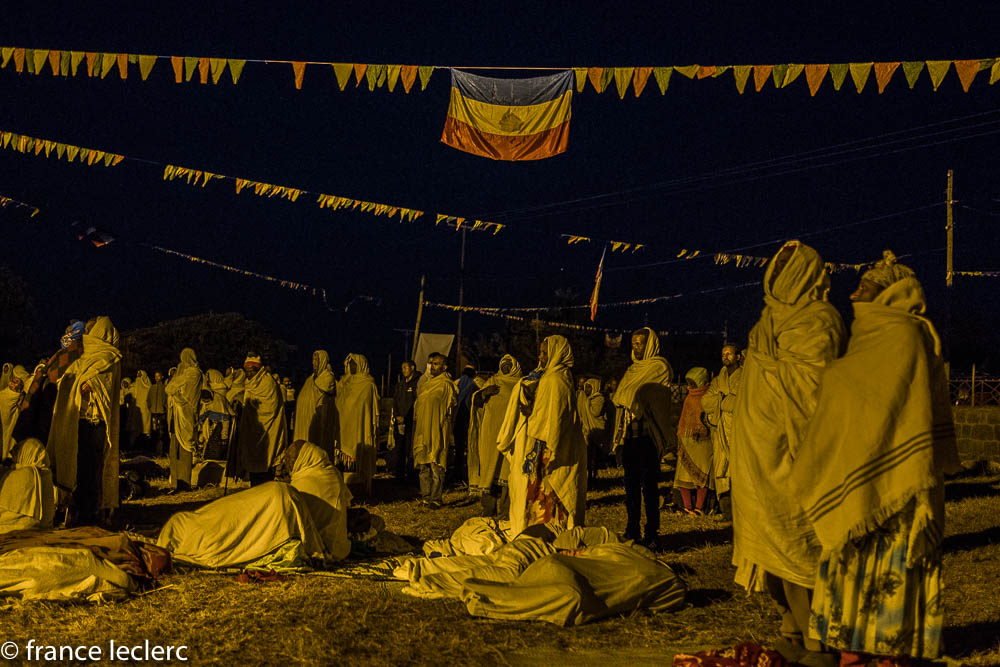 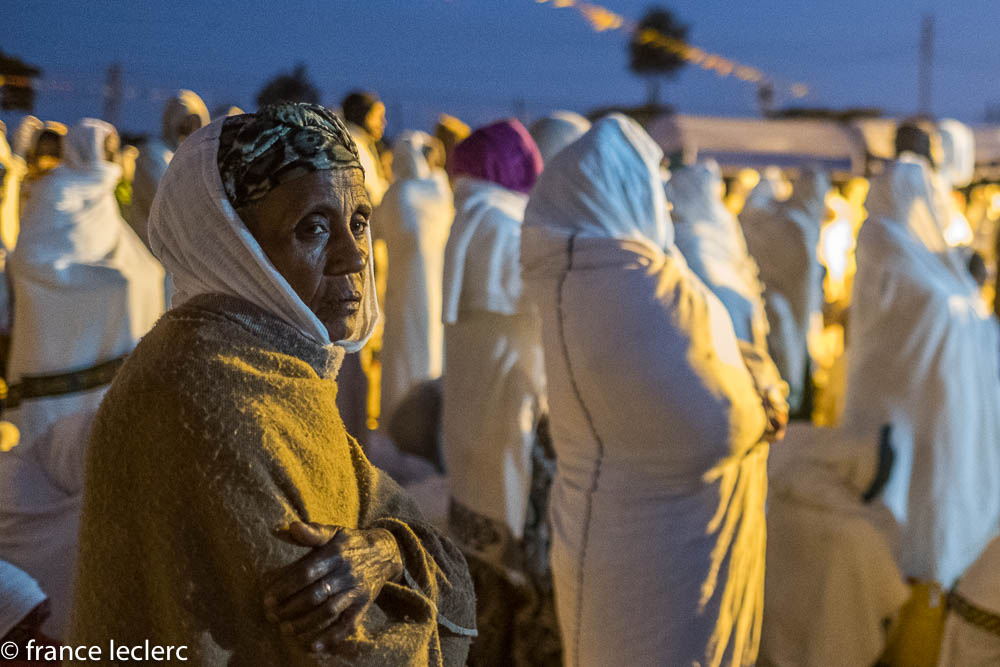 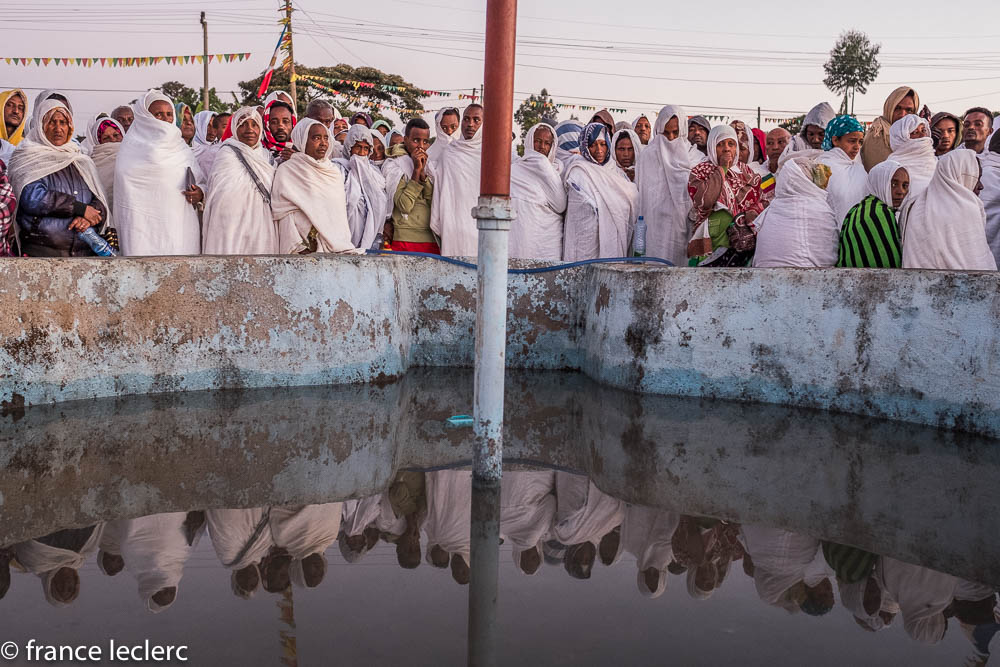 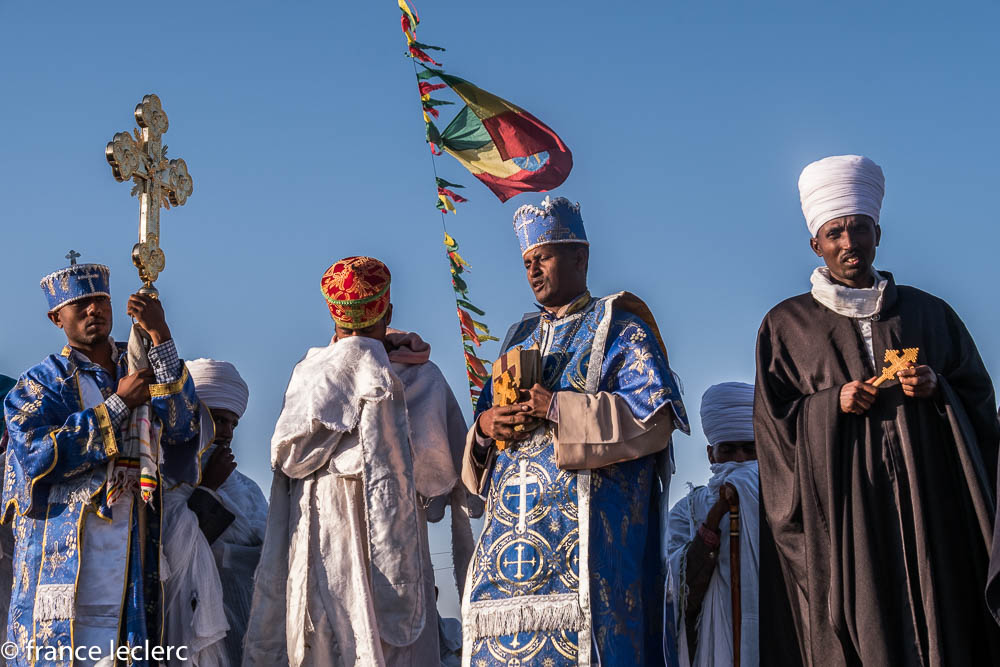 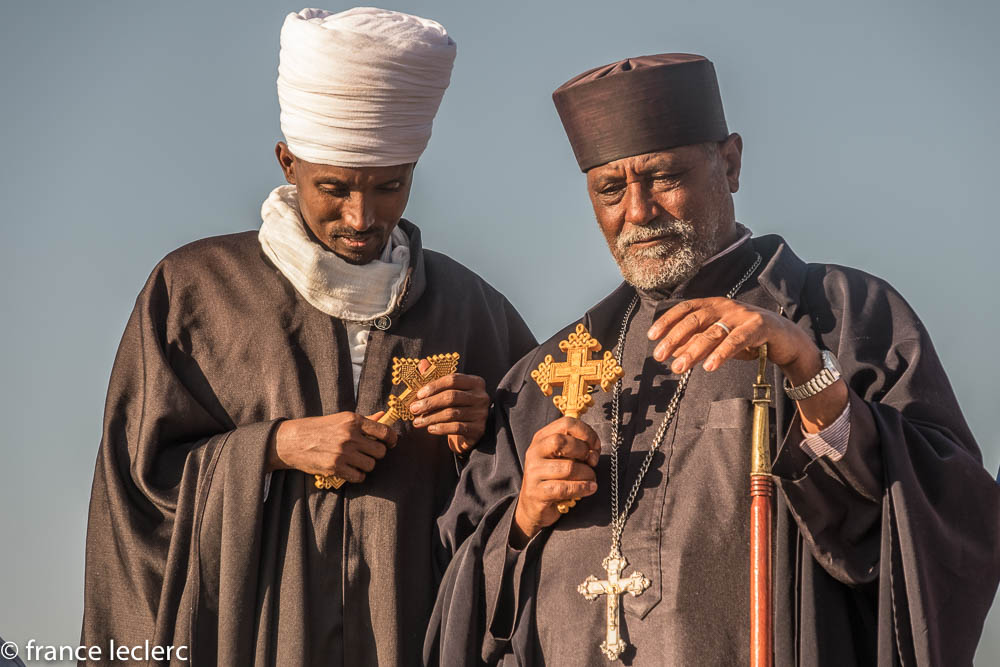 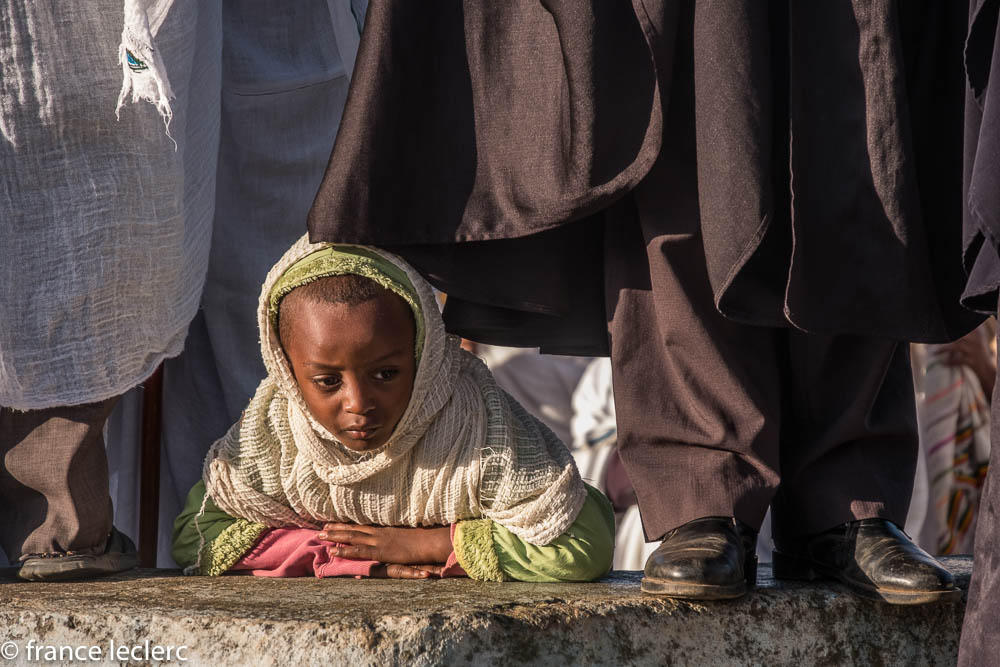 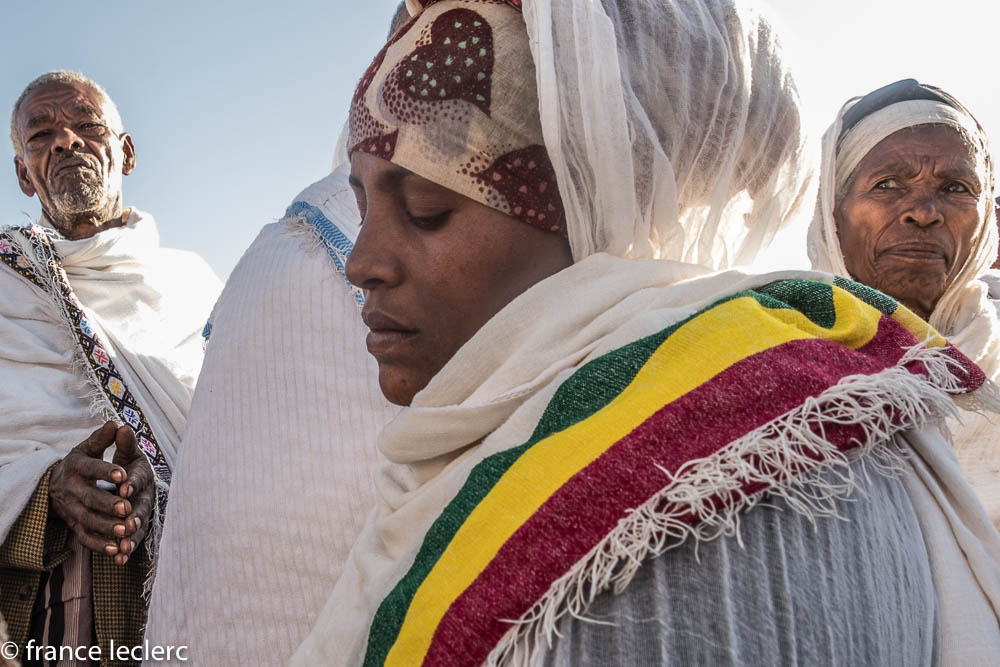 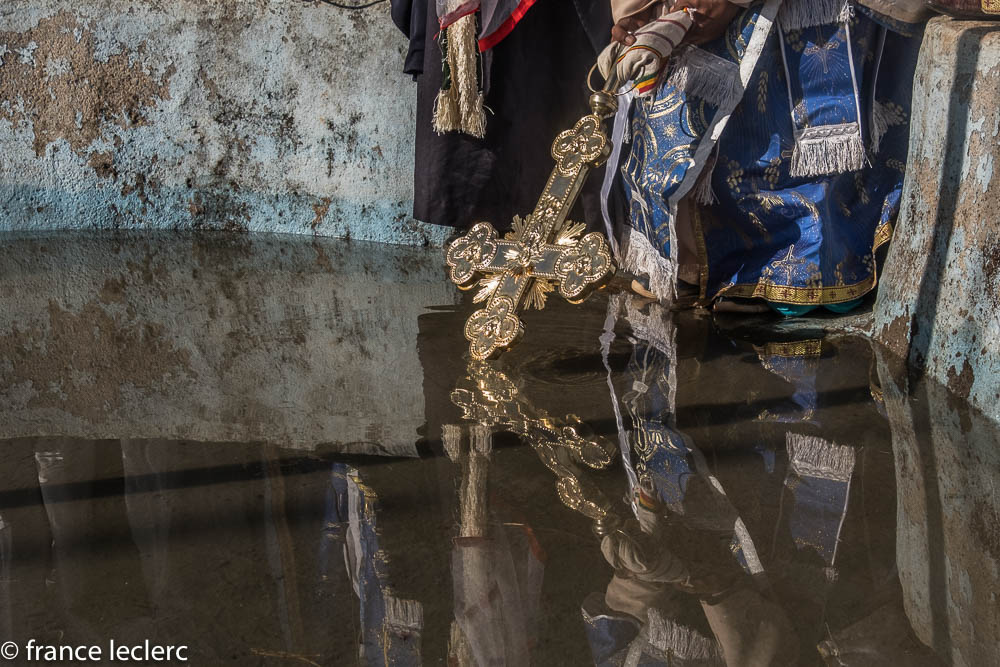 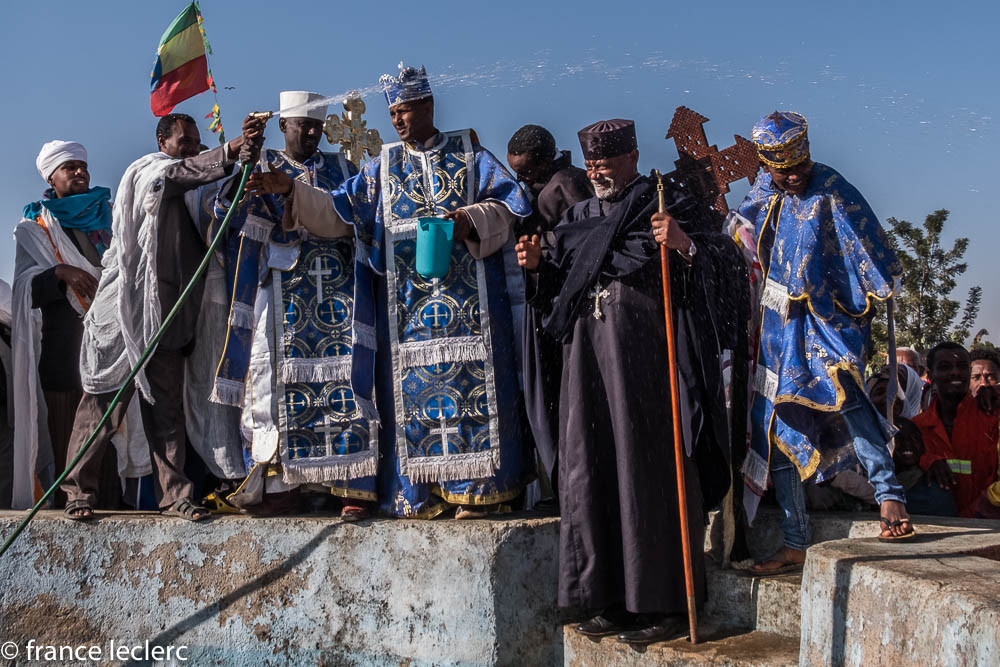 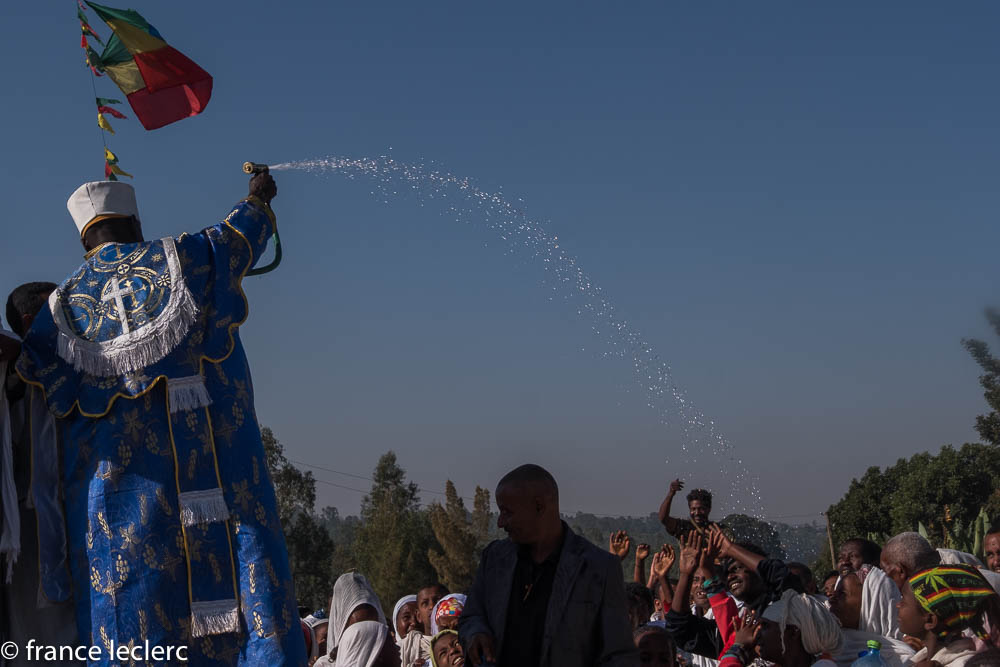 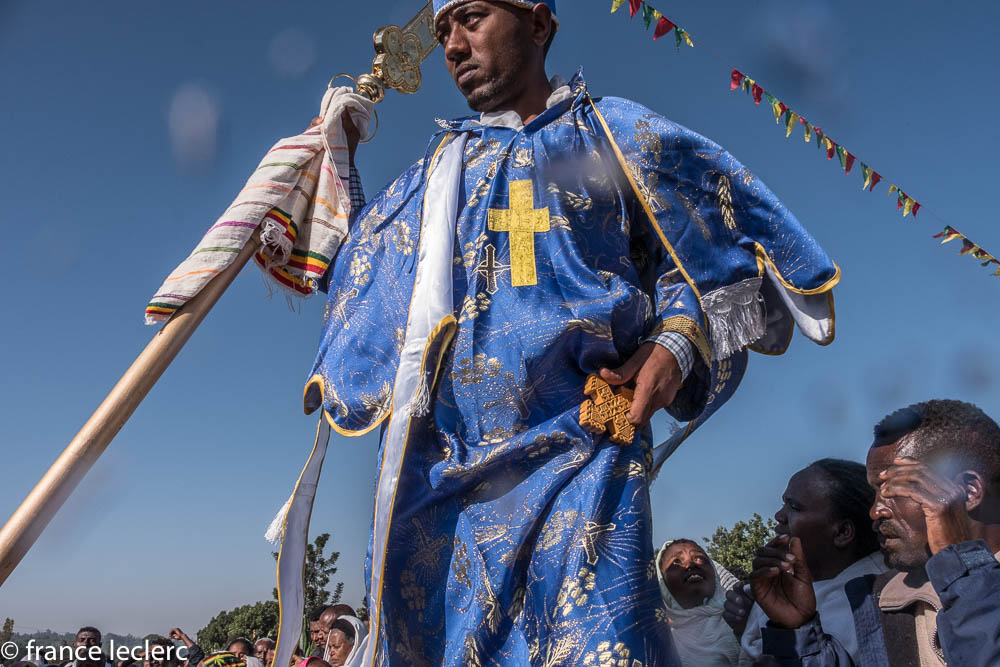