A Nomadic Tribe and their Camel Lot 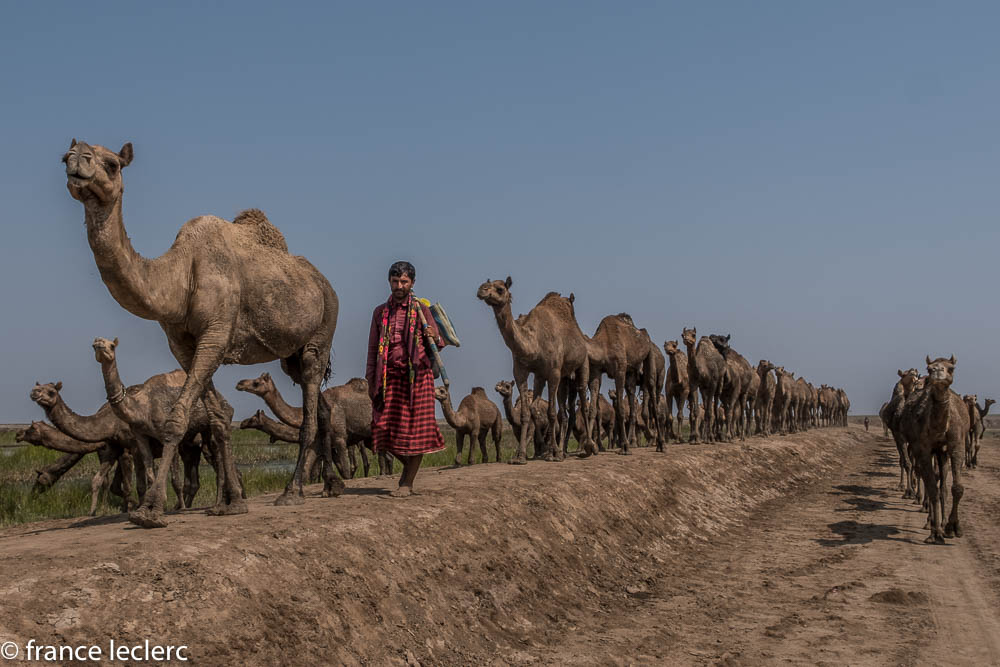 On my trip to Gujarat last winter, I spent (too little) time with a group of nomadic camel herders from the Jat (or Jatt or Jath) Fakirani ethnic tribe. The Jat Fakirani is a nomadic Muslim community, mostly found in the Kutch region. Every year, however, after the monsoon, they now migrate east so that their animals have better grazing opportunities; this is where I met them. The group I spent time with numbers about 100. They travel with about 1000 camels as well as some goats and buffaloes. (They used to only have camels, but the camel trade is not as good as it once was so they have diversified into a few buffaloes and many goats). On their migration they walk between 350-400km to get to their destination taking about 6 weeks to do so. They then retrace their steps, going back to the Kutch six months later.

I first visited their main camp, which is an amazing thing to see. To say the least, these people are efficient packers. Everything they own can go on the back of a camel. Their shelters are fairly minimal with barely a tarp to protect them from the scorching sun during the day. I visited the camp at mid-day which is less than ideal light, but I had no other option. At that hour the men are not around because they are with the animals. The women were initially quite reluctant to interact and not really interested in being photographed. Still, I tried to communicate with them as best I could. The girls and young women were clearly in charge of taking care of the goats. They were friendlier (the young women not the goats) and after some time agreed to be photographed. In due time, some of the older women also agreed.

Saying that these women have a hard life is, of course, an understatement. They work non-stop at fetching the water from a considerable distance, making tea, preparing food, gathering wood for the fire and greens for the young goats to eat. They seem to wear every item of clothing that they own, even though the heat is unbearable (at least for me). Yet, they look stunning, their teeth are pearl-white, their hair very long, which they wear in two braids, their colorful dresses are spectacularly embroidered and their jewelry bold and intricate. The married women also wear a distinctive nose ring, though some of the younger ones did not. I tried pointing to my wedding ring as a suggestion for an alternative, less painful way of indicating your marital status, but I am sure they had no idea what I was talking about. 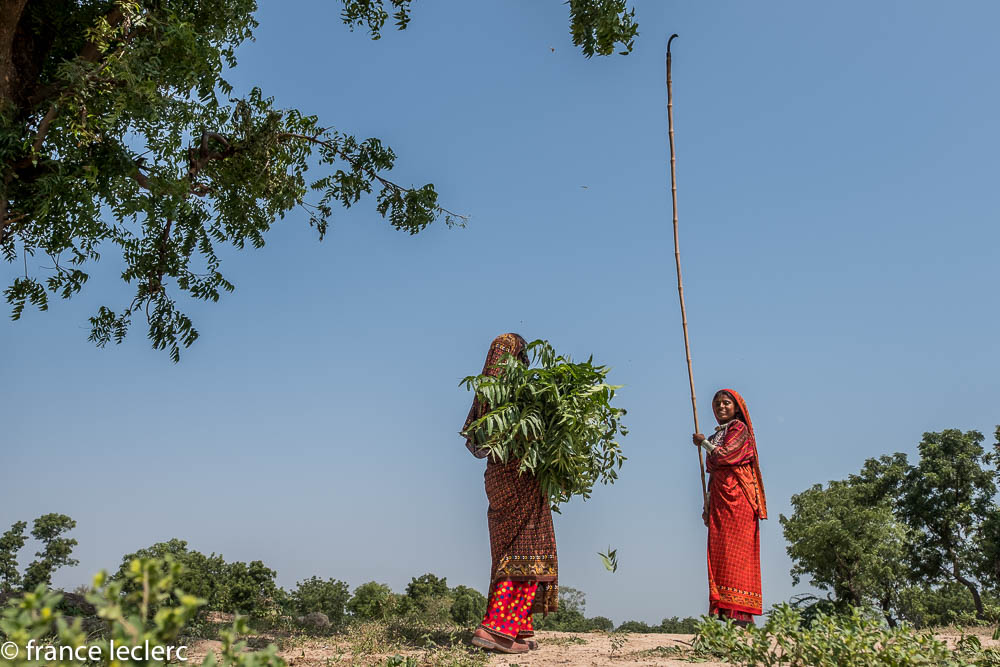 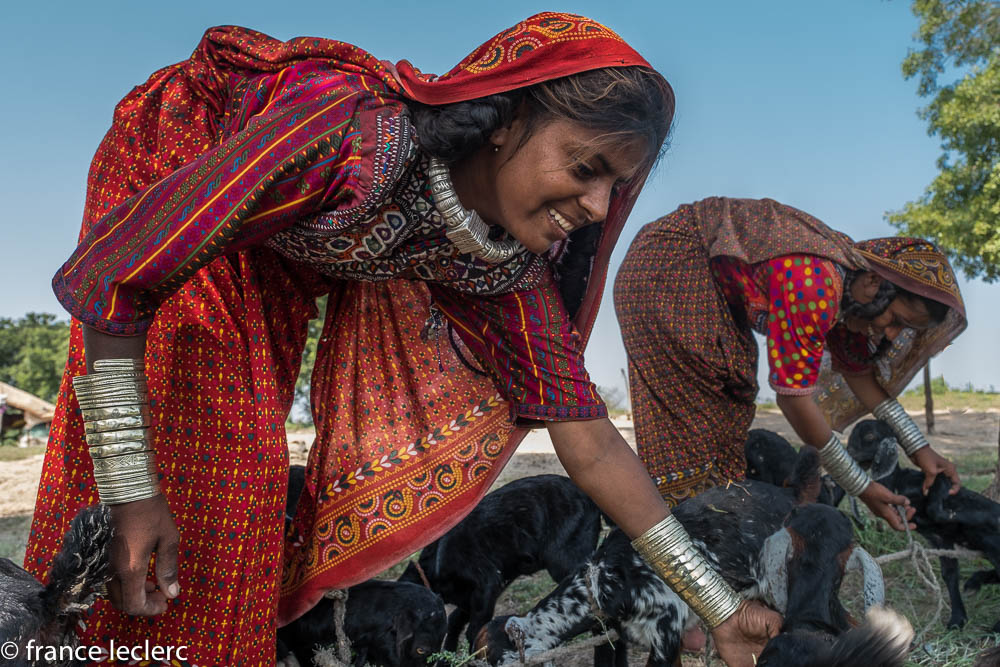 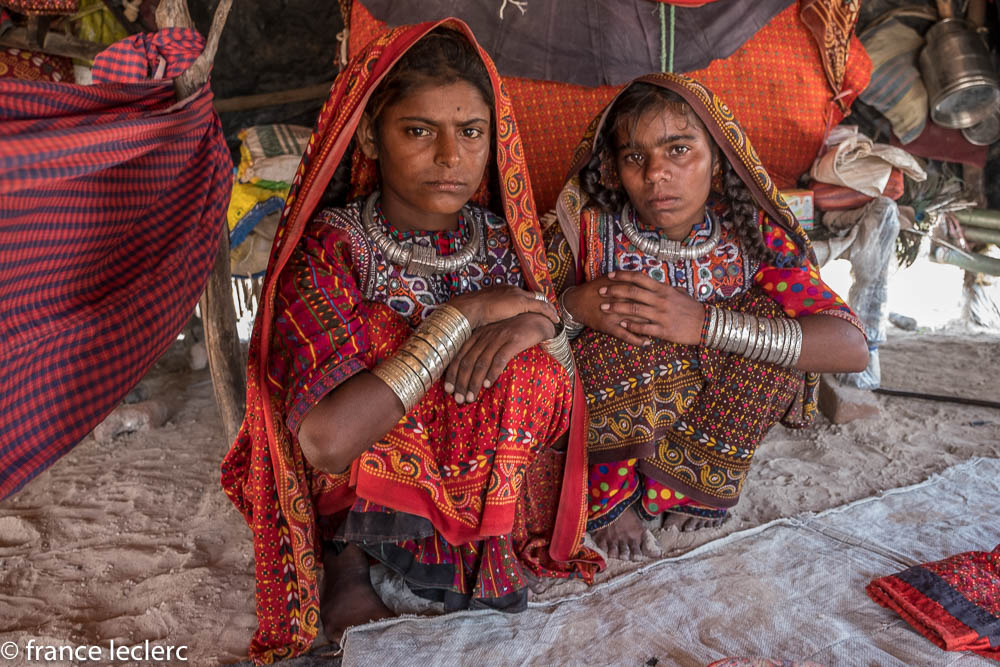 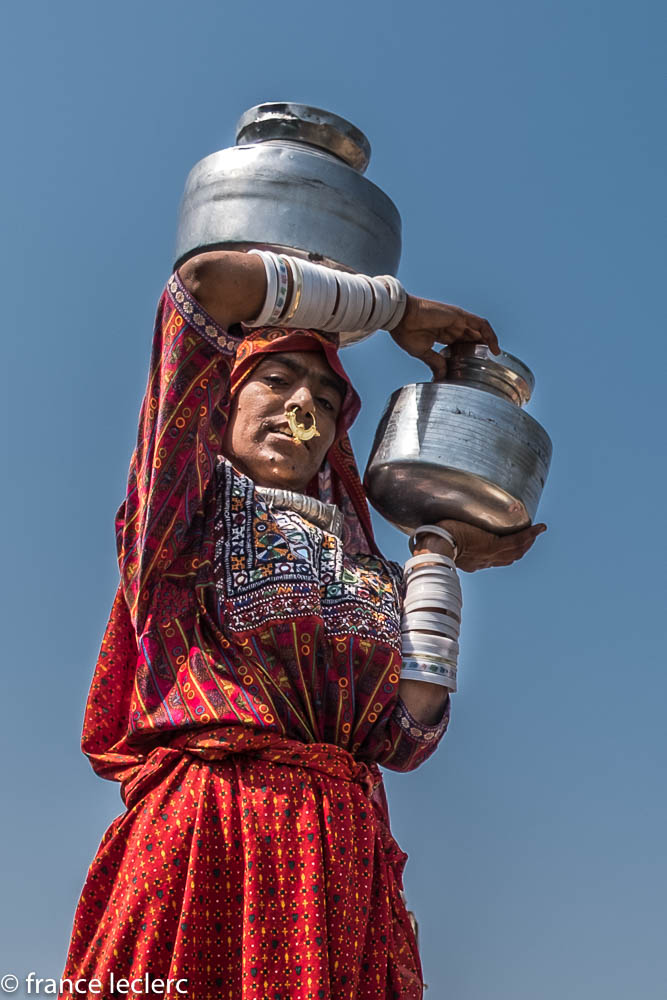 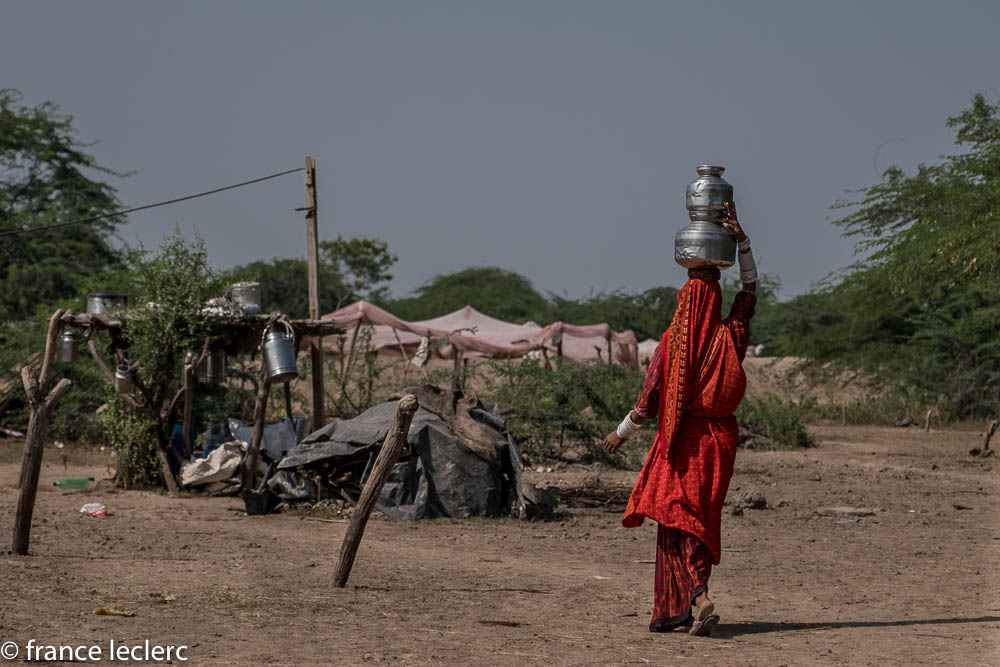 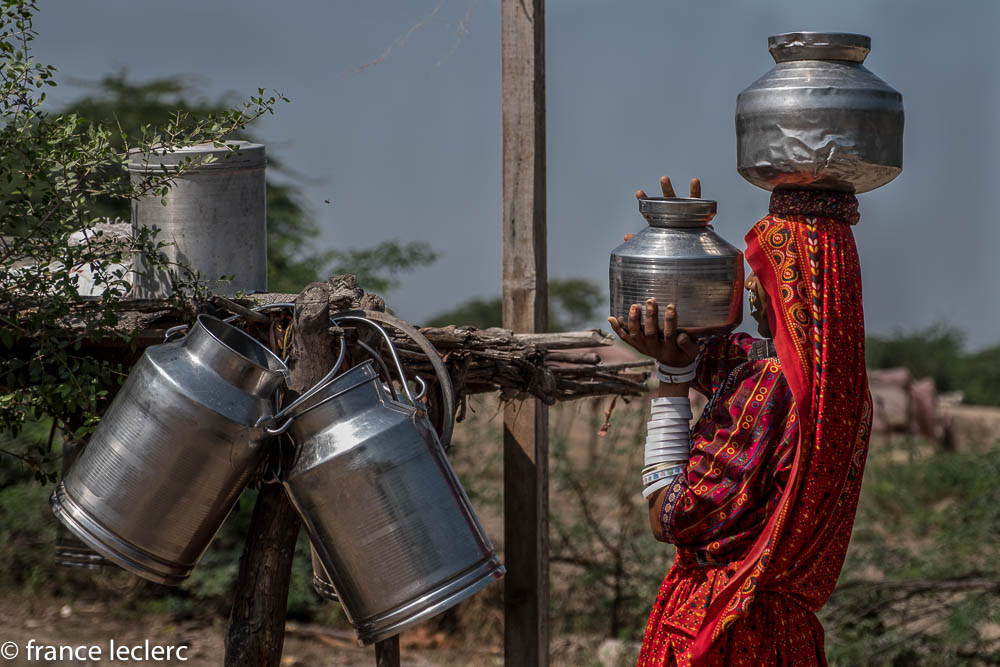 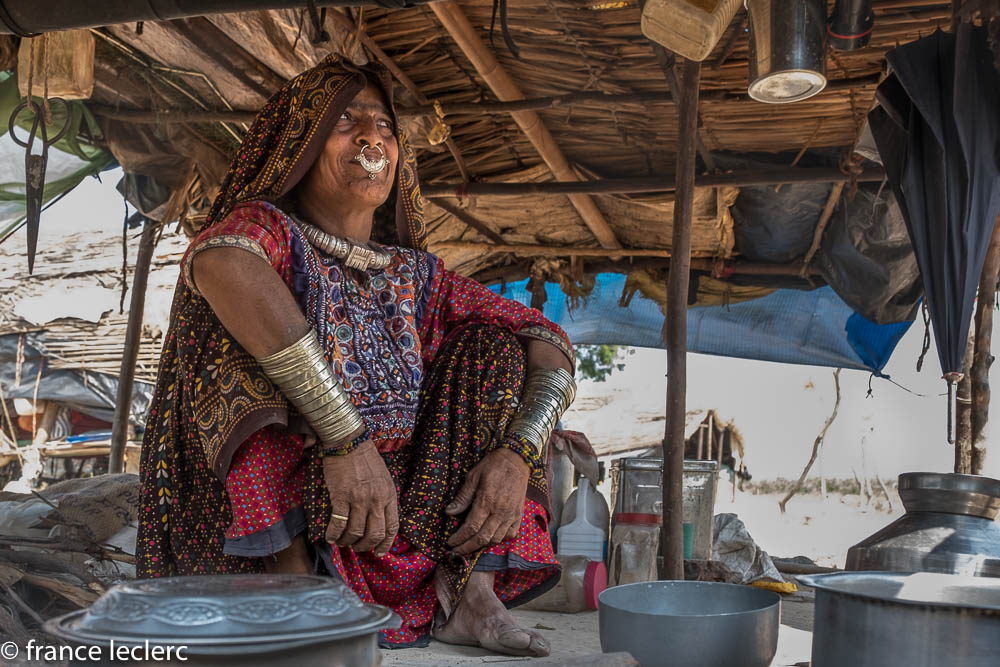 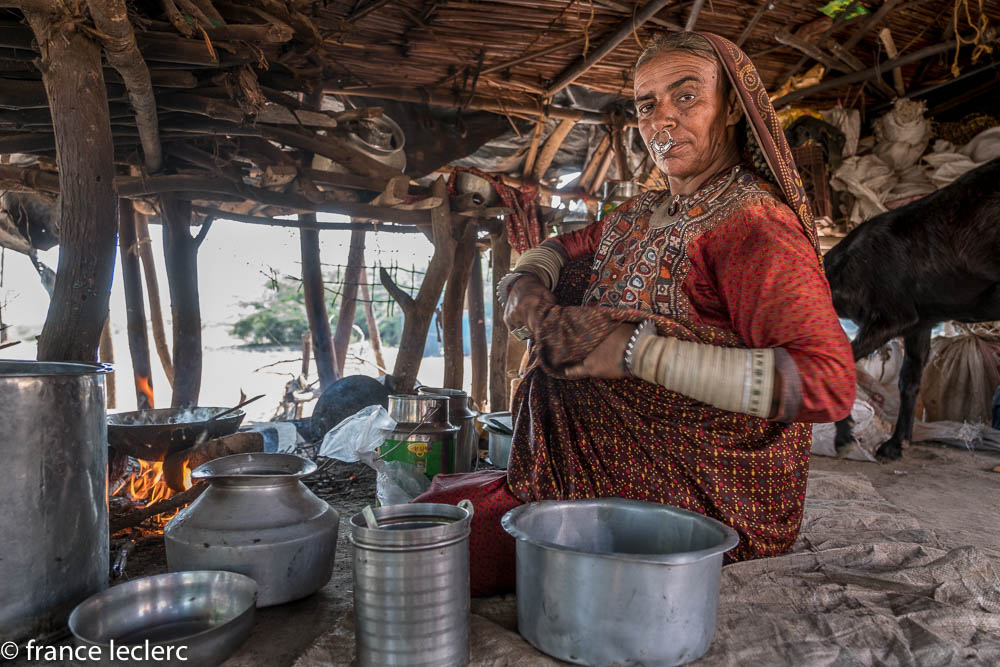 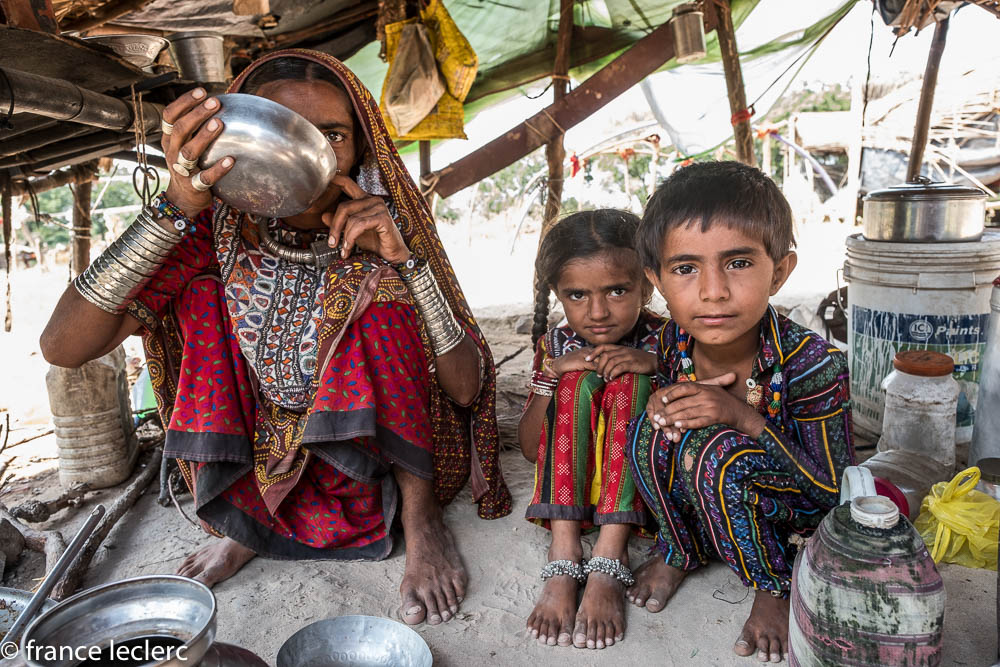 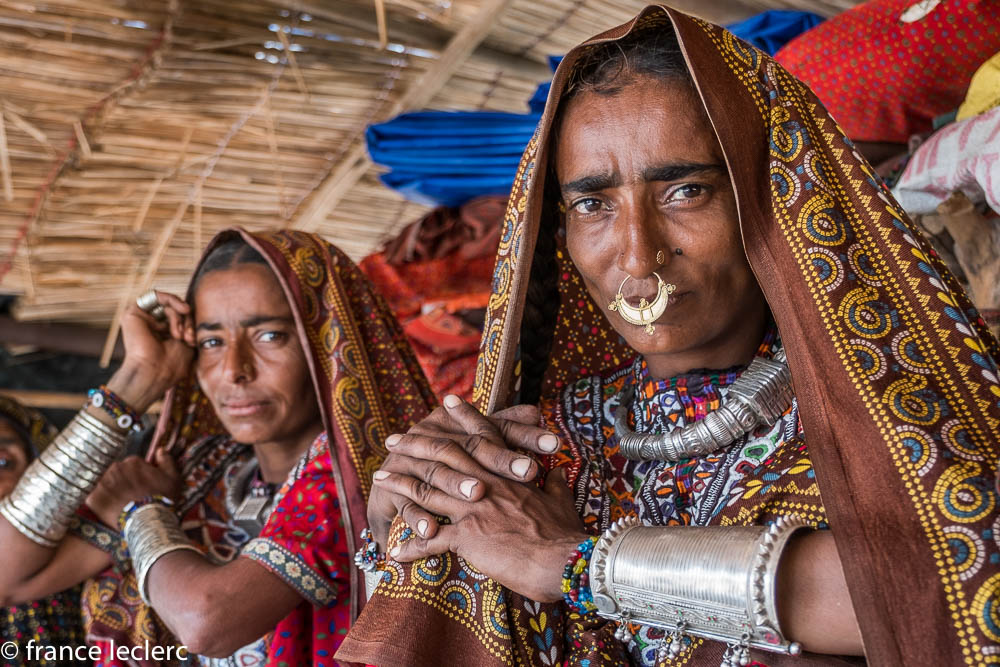 At the end of the afternoon I asked if I could come back the next day and see the men and their camels. To my surprise they agreed, but informed me that the camels do not get back to this camp. They stay far away where grazing is better, with the men taking care of them (and a few family members to take care of the men). While there they live in a very basic shelter. Some of the camels do get back to that shelter at mid-day (again bad for light) to be milked, camel milk being a very important part of the Jat’s diet.

So, the next day I was driven back out into the desert heading to the men’s shelter, hoping to find my private camel lot 😉

The shelter was indeed very basic. I got there early so the camels were still far away. I spent time with two delightful little girls, Acat, around age 10 and Niyamat, around age 8, trying my best to help them with their numerous chores and chasing them as they chased the goats. (They found my efforts wildly amusing.) To allow the camels to drink in an orderly way, a long trench had been dug next to a small lake. The water was transferred from the lake into the trench using an ingenious system that involves swinging a large container back and forth from the lake to the trench.

With the water ready, the parade of camels appeared on the horizon.   The camels first got their well-deserved liquid refreshment and then allowed the men to milk them. My host kindly offered me a cup of the just procured precious liquid, but I was reluctant to try it untreated. However, moments later I found I could not resist my first chai with camel milk, which gave it a delicious caramel flavor. 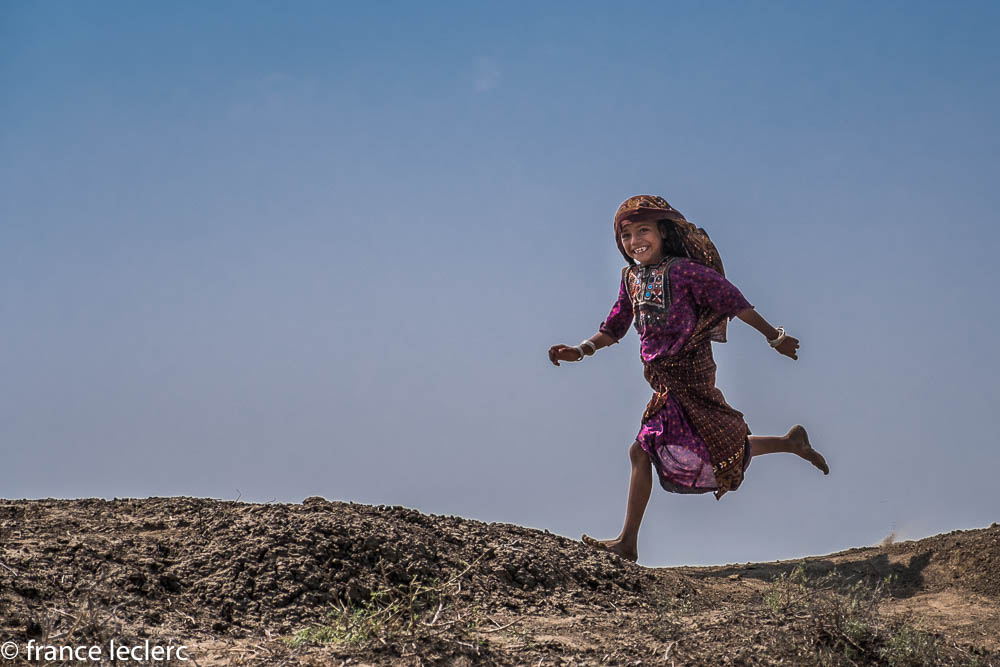 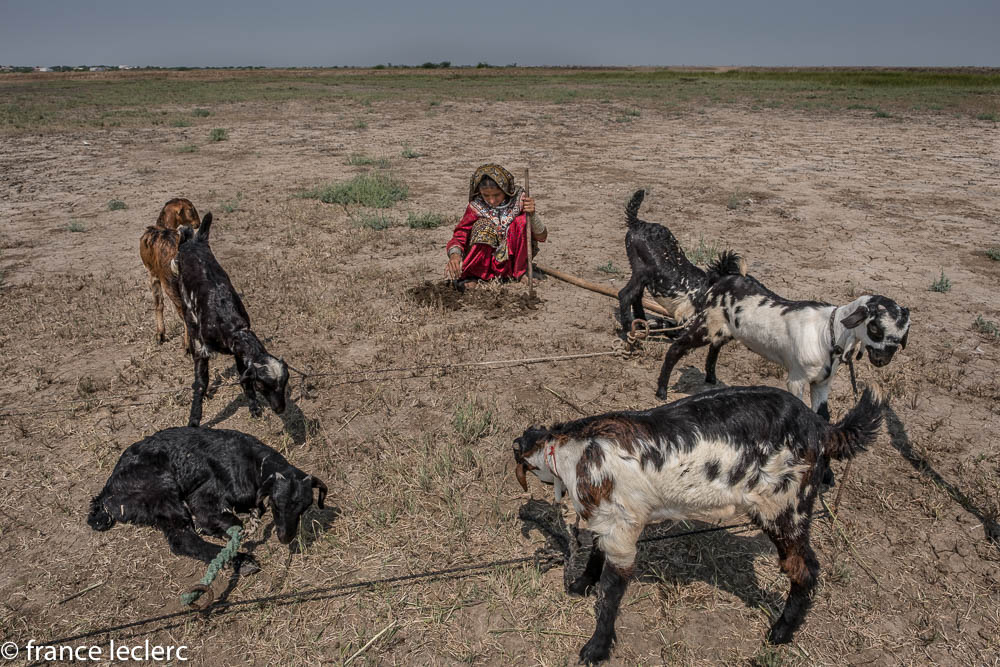 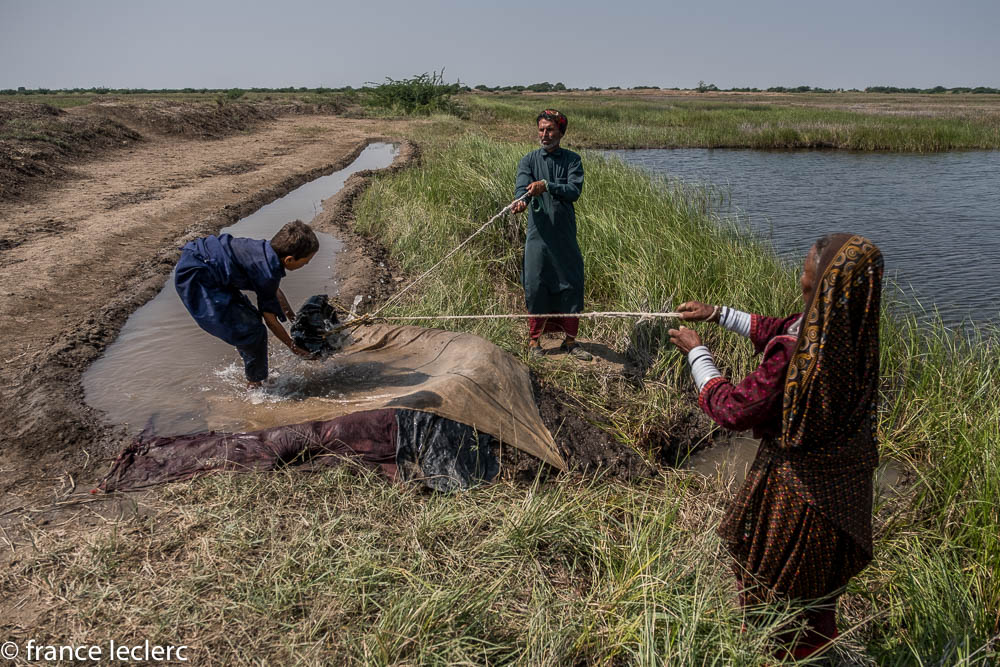 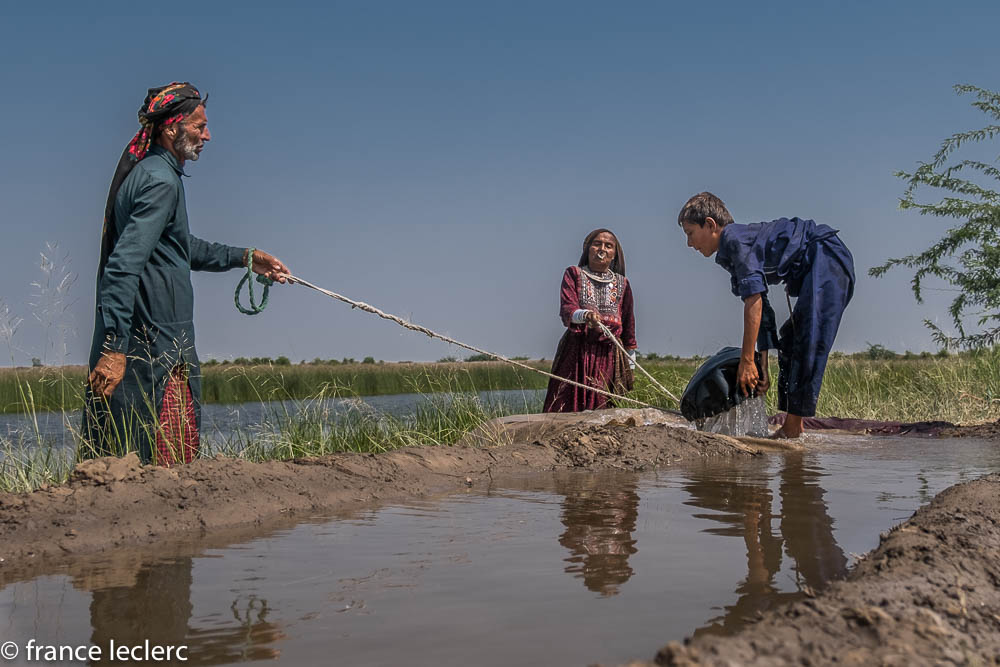 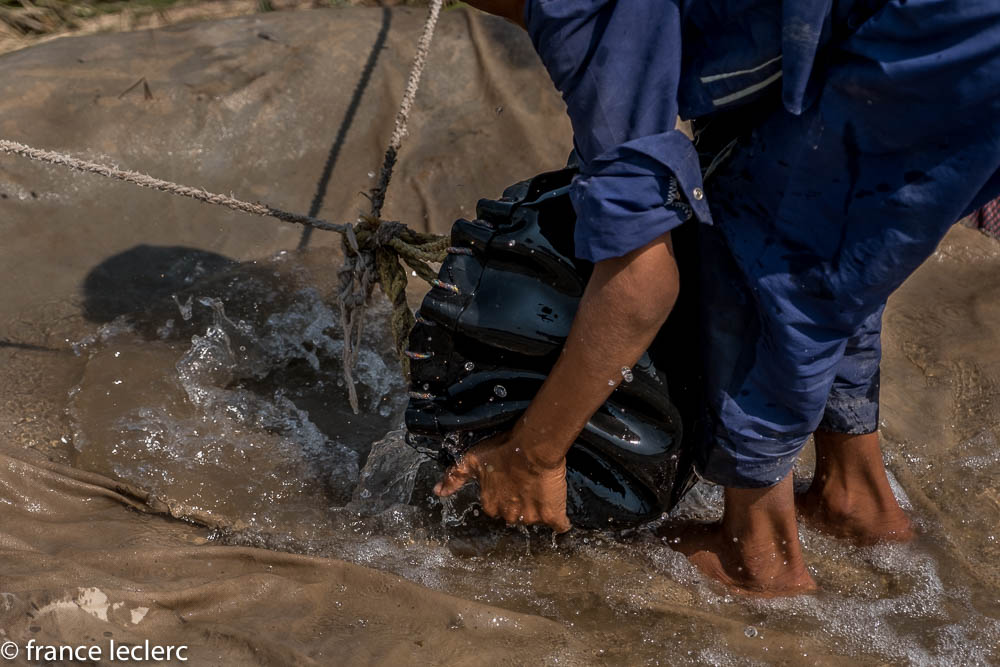 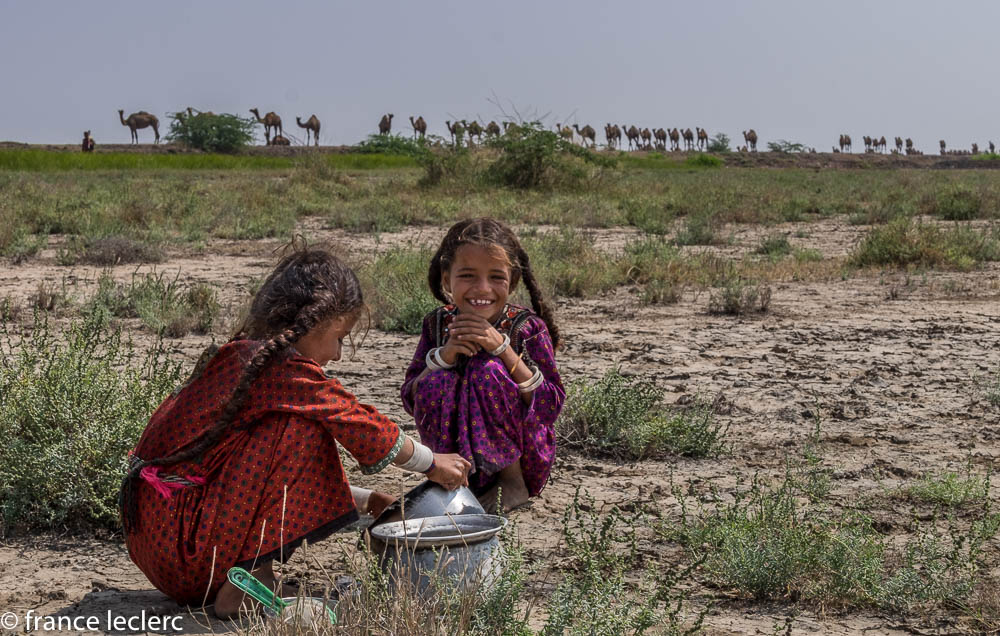 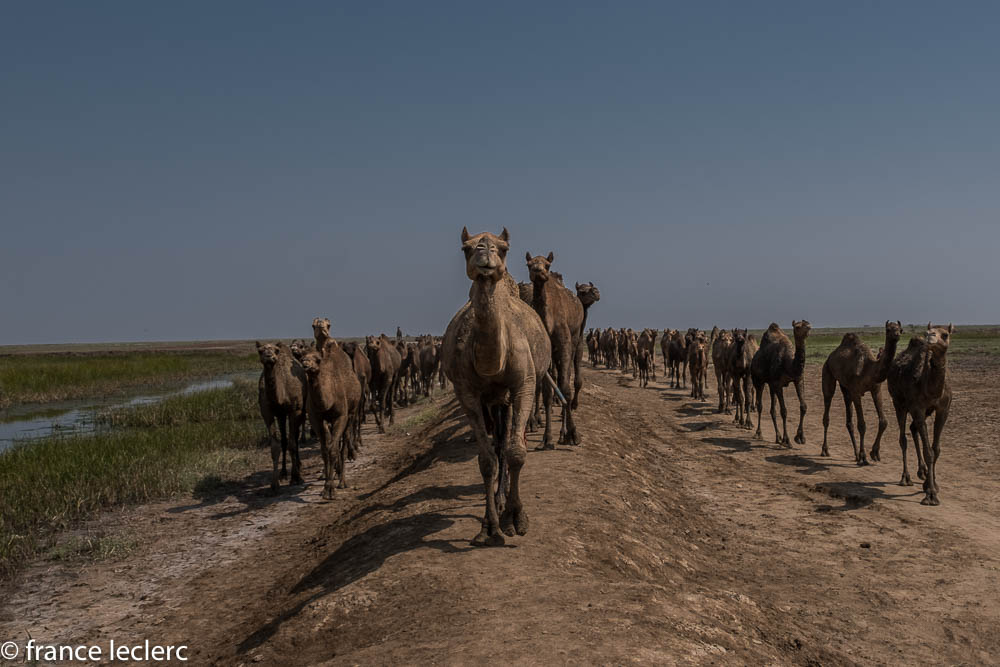 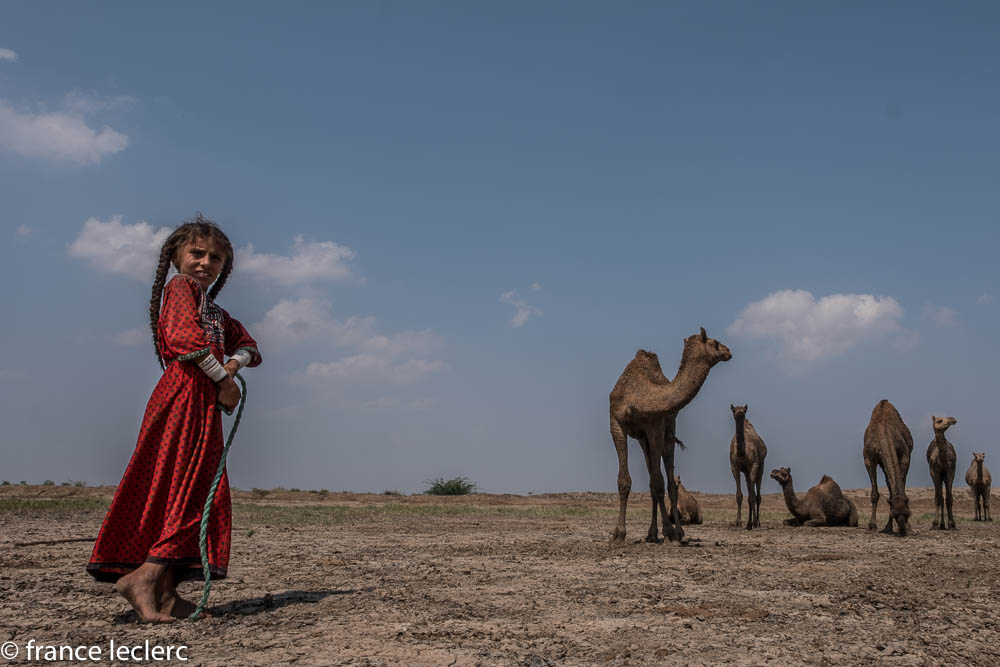 Hoping to have another cup soon,