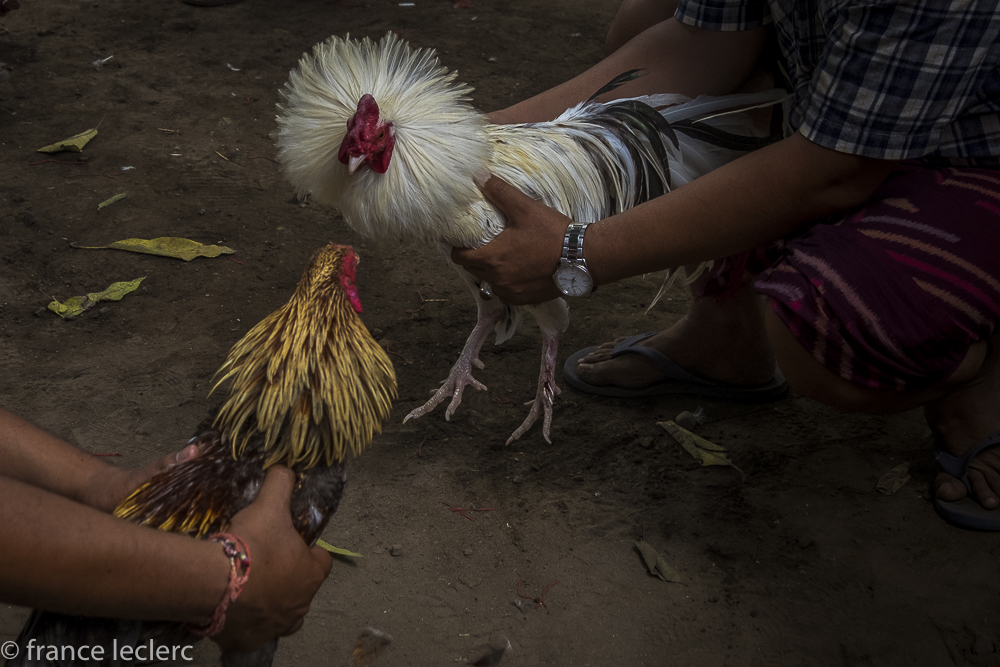 “As much as America surfaces in a ball park, on a golf links, at a race track, or around a poker table, much of Bali surfaces in a cock ring. For it is only apparently cocks that are fighting there. Actually it is men. ” Clifford Geertz (1973) Deep Play: Notes on the Balinese Cockfight in “The Interpretation of Cultures”, NY Basic Books.

On my first day in Bali, I hear about a religious ceremony taking place in a temple not too far from where I am staying. Bali being an intensely spiritual island with Hinduism as its main religion, ceremonies are pretty much a daily occurrence here. But I am told that this one would be of particular interest with a number of villages involved. As I make my way to the temple, I see a crowd of men standing in front of its entrance, in a circle, seemingly very agitated. Getting a little closer I realize that there is a cockfight going on. The idea of witnessing it does not have much appeal to me so I quickly continue to the temple for the ceremony. But I am intrigued by the idea of a cockfight in such close proximity to a Hindu temple. I resolve to find out more about cockfighting in Bali.

The next day I am informed that “tajen”, as cockfights are called locally, are done for religious purposes as some ceremonies require the sacrifice of blood to expel or pacify evil spirits. For that reason, cockfights are often performed on the premise of a temple. I also learn that since 1981, the Indonesian government has banned them (both for animal cruelty and because of the gambling associated with it) for non-religious purposes. Enforcing this ban on the “Island of the Gods” however, is a challenge, as there are temples in every house, office, village, mountain, beach, rice field, a cemetery in Bali… so whatever happens on the island can almost always claim to be for religious purposes. So the police mostly look the other way.

Traveling around the island later in the week with a local companion, I notice bamboo woven baskets housing beautiful roosters pretty much everywhere I go. I start to realize how prevalent cockfighting is in Bali. On my last day, driving around hoping to come across one of the frequent processions of locals marching to a temple, I notice a large number of motorcycles and a few cars parked on what looks like a dead-end street. Curious as to what is going on, I again find myself in the midst of a small group of men rooting loudly for their favorite bird. Though I clearly do not condone the activity, this time I decide to watch and photograph this robust part of the Balinese culture.

The first step for a rooster owner (or its handler) is to find a suitable opponent for a fight. When this is settled, each cock will have a sharp blade about 4 inches long, called a “taji”, attached to one of his heels with a long string. This “weapon” will make the fight relatively short but quite bloody. But before the fight begins, the men in the crowd shout out which bird they are backing, and how much they want to wager. The owners of the two birds then place them on the ground, facing one another. Most of the time, the cocks will fly almost immediately at one another and for a moment the two birds almost become one as all that can be seen is a mass of feathers frantically moving. This goes on until one drives a solid blow with his taji. Those who lose their bets then give their cash to the organizer of the cockfight before another round starts. The owner of the winning cock wins some money and, as a bonus, gets to cook the carcass of the losing bird, which is often plucked right on the site. 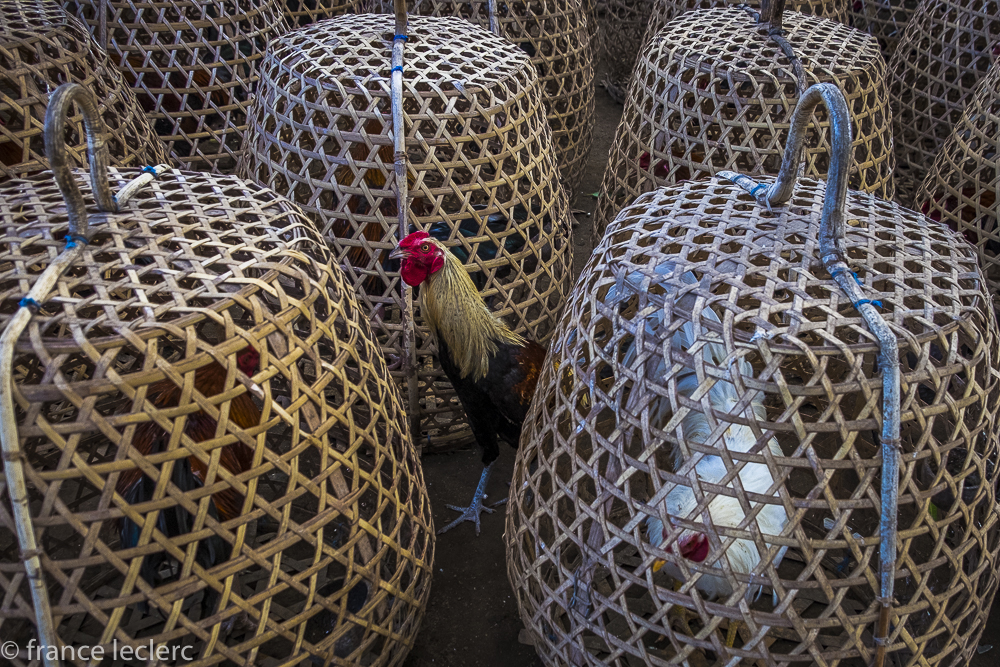 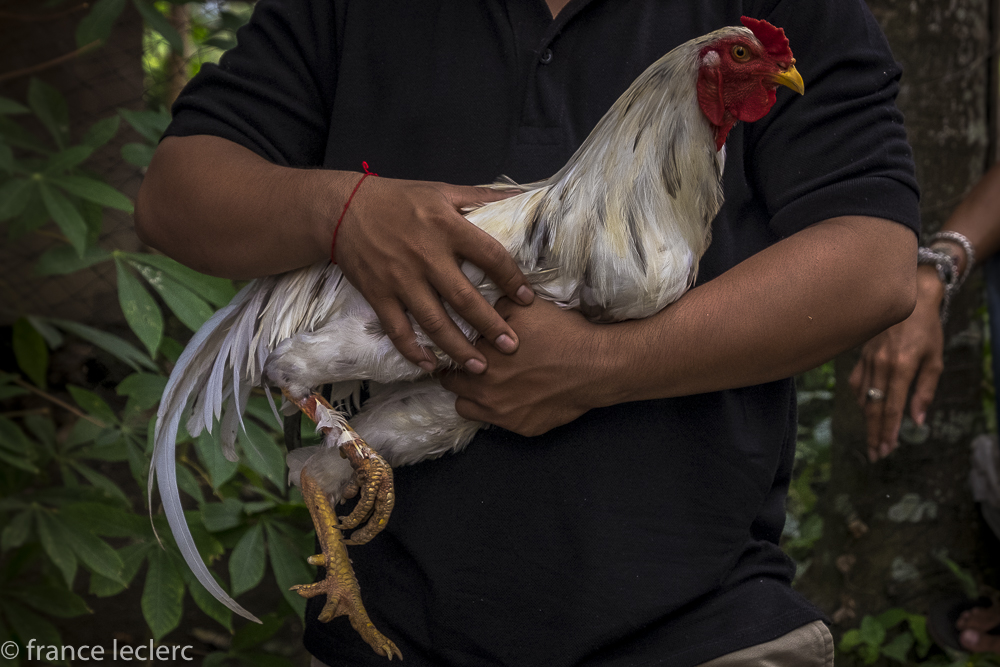 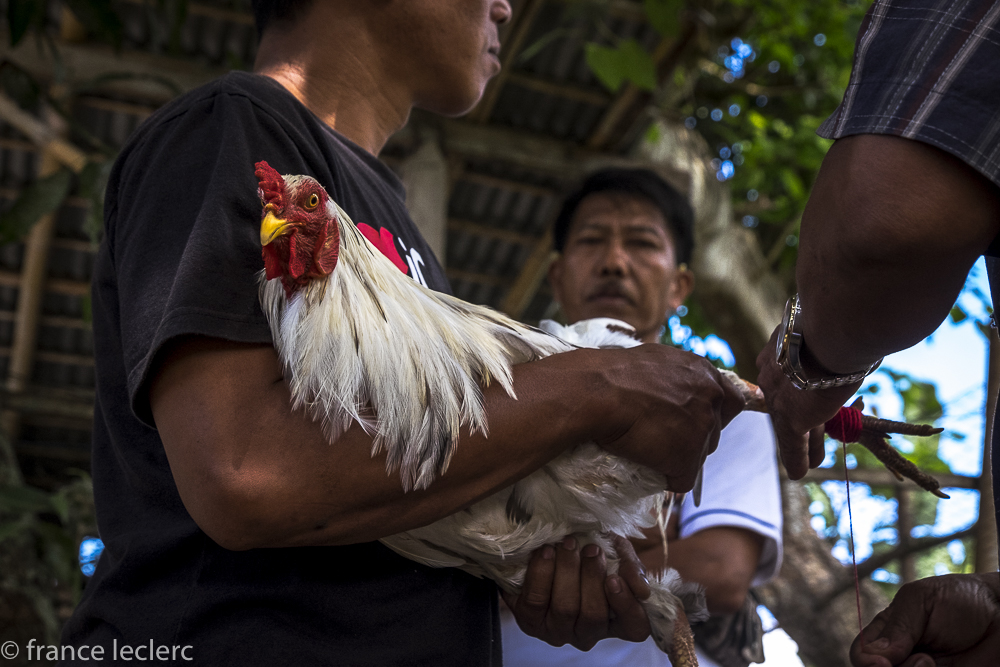 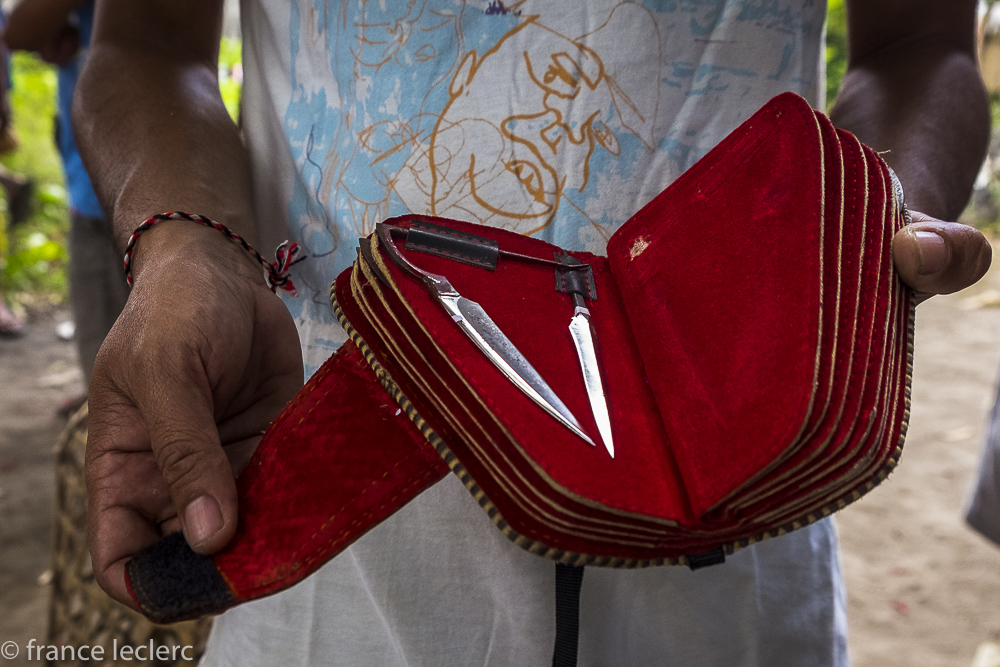 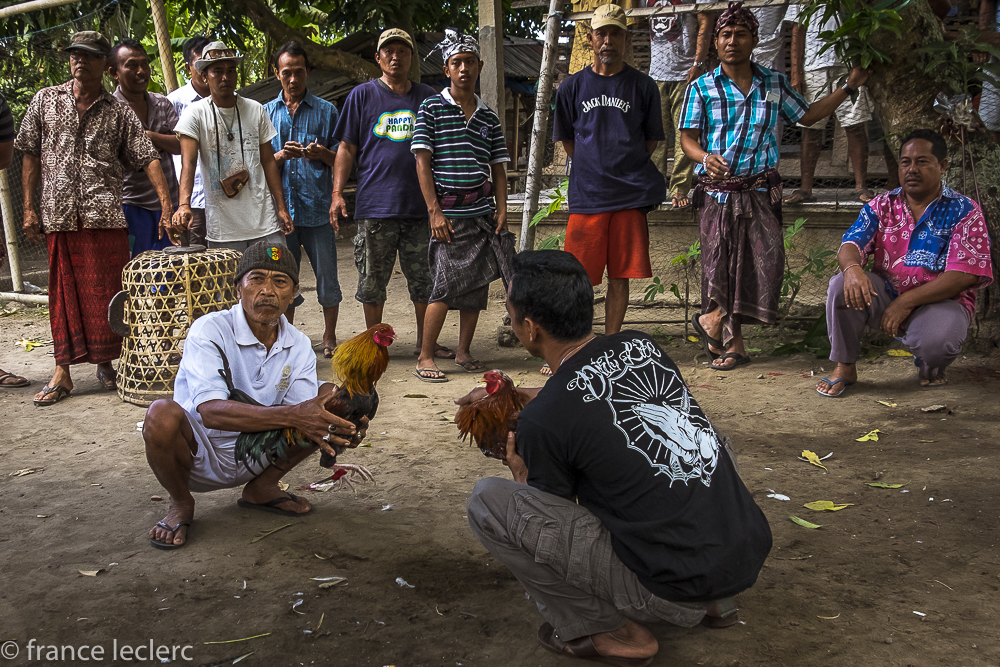 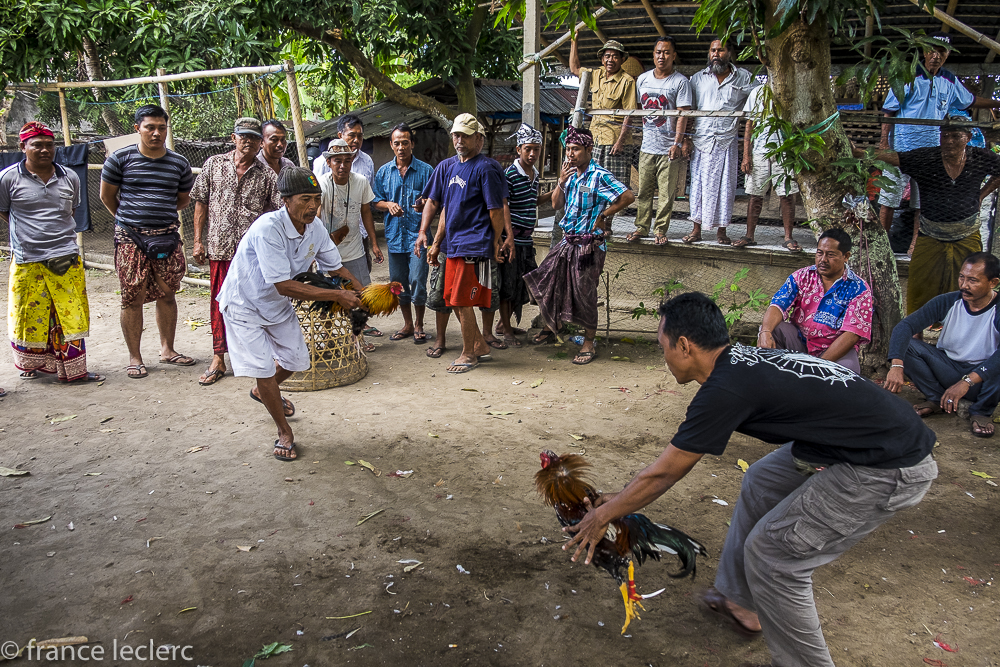 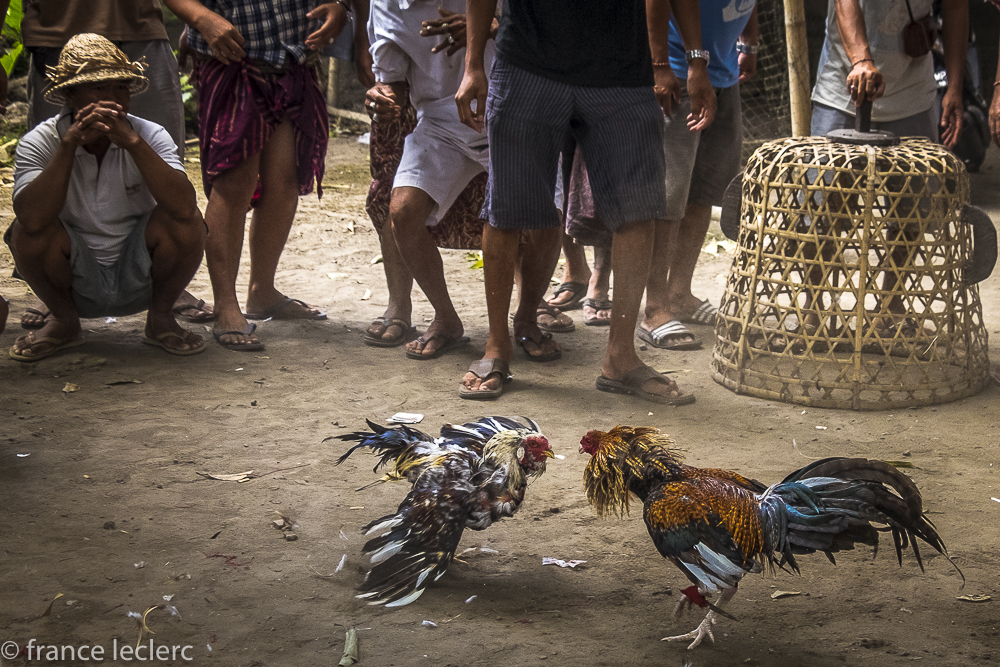 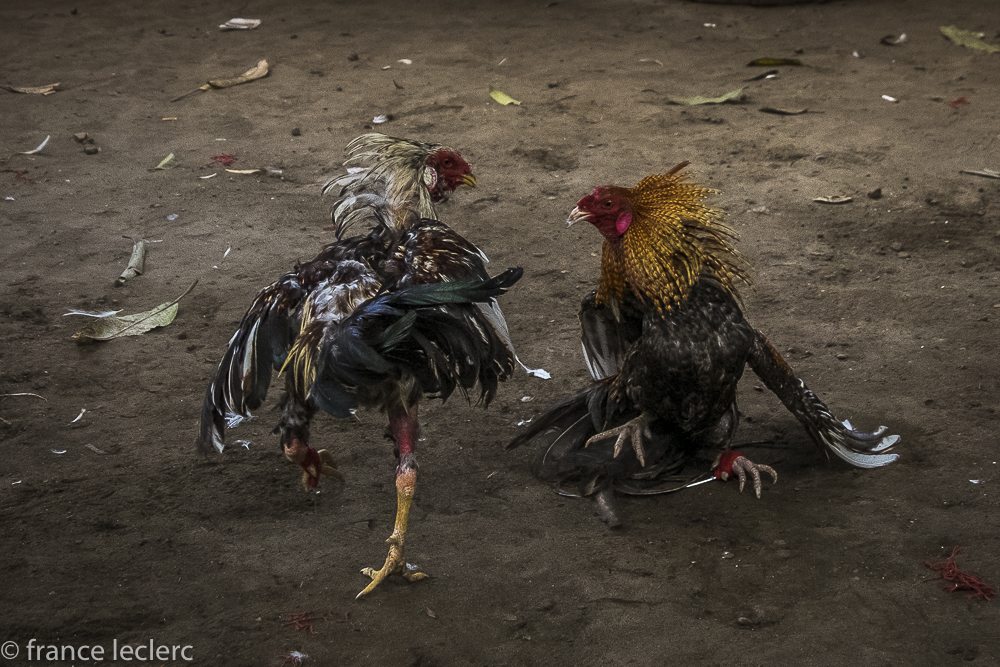 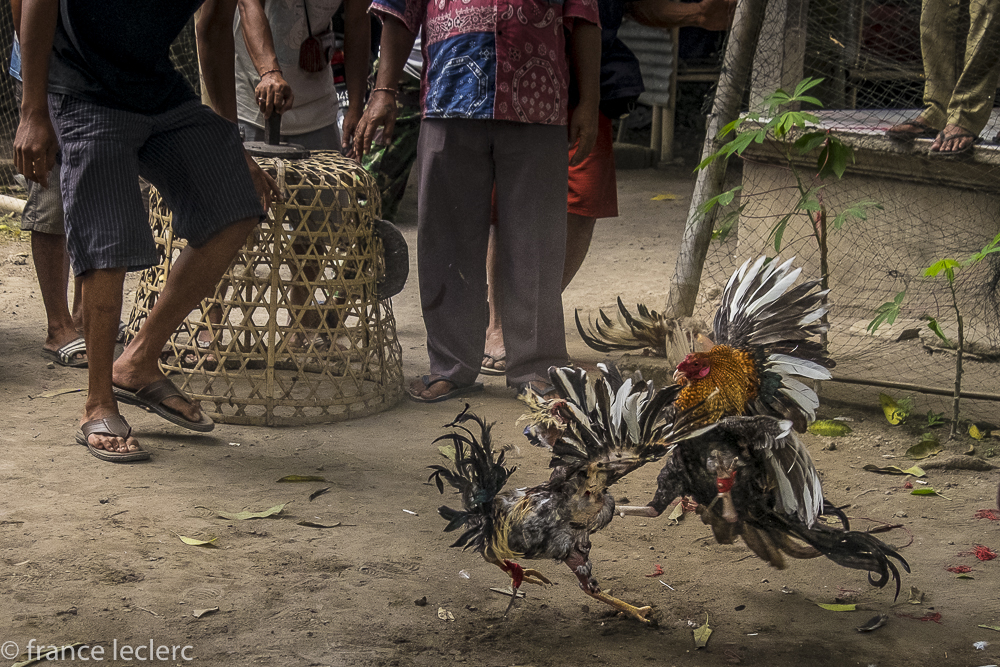 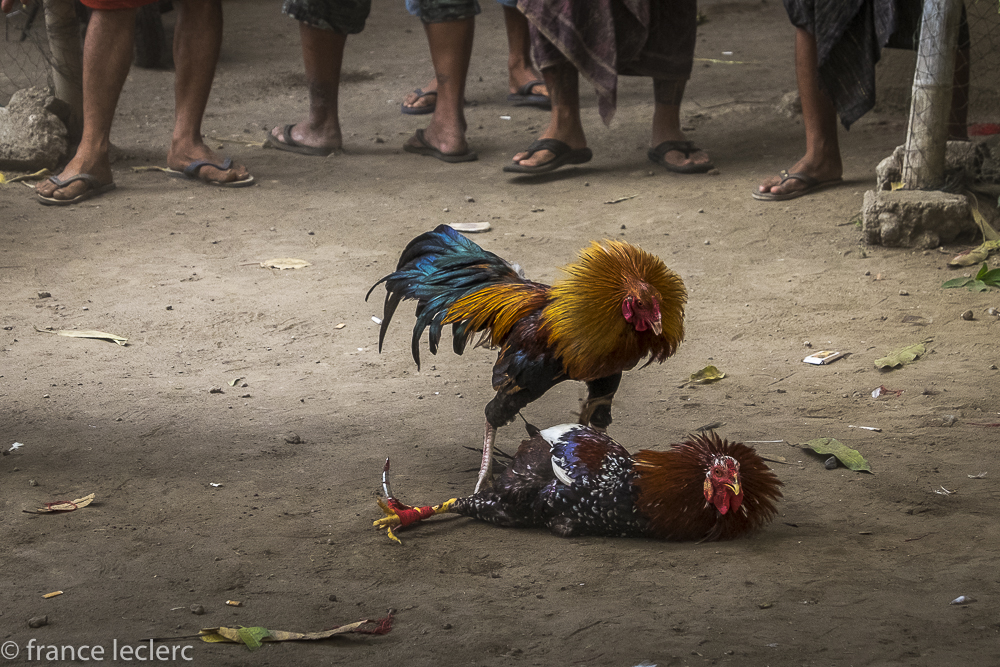 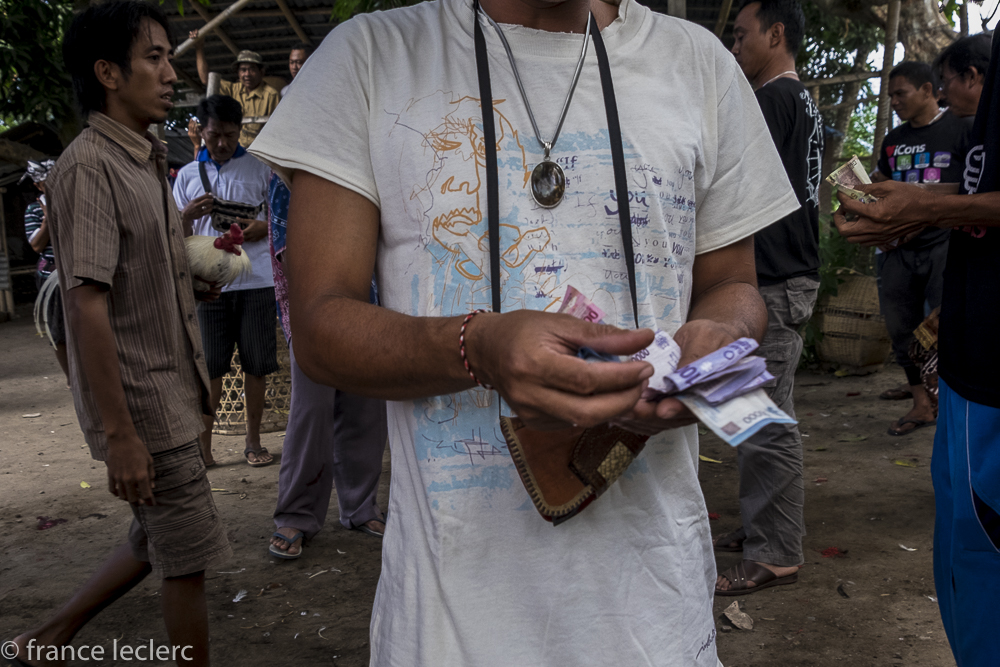 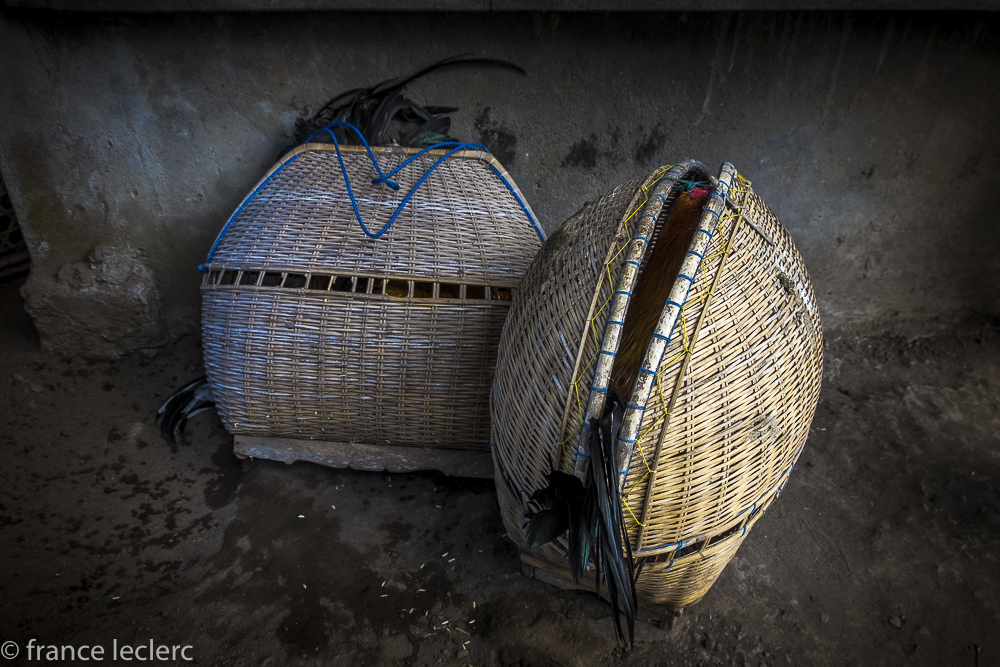 After witnessing a few rounds, I go back on the road and come across a structure that looks like an arena. Going in, I see cockfighting again but this time on a much grander scale. Hundreds of people are there (men only, the only other woman I see there is the one selling refreshments) and the noise made by the betting and cheering is deafening. One man particularly catches my attention, as he seems to have a very close connection with his bird, a bird that, as we can see was about to have his last fight. 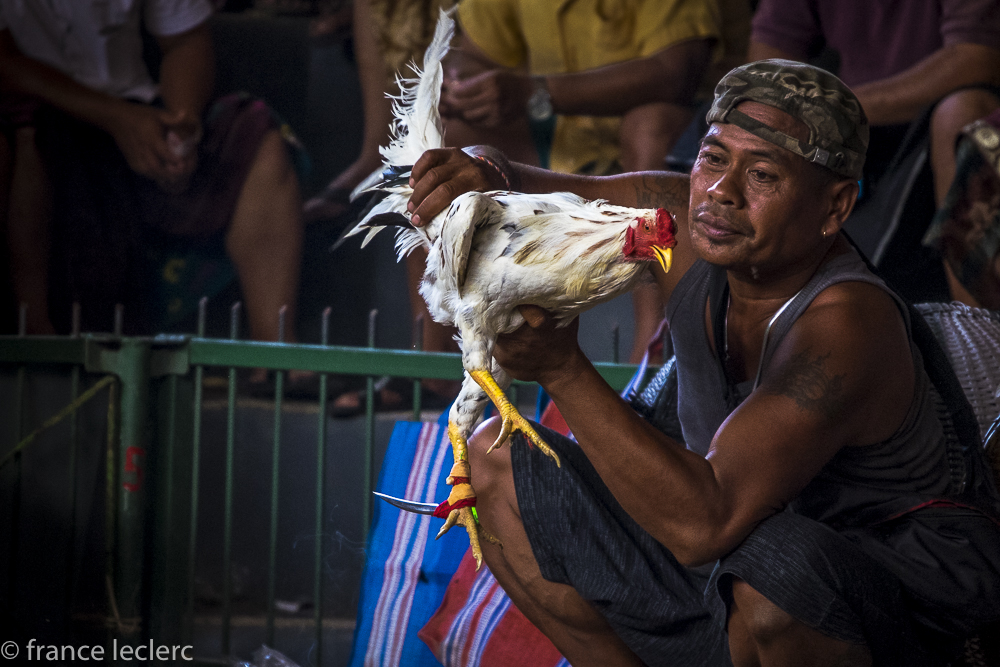 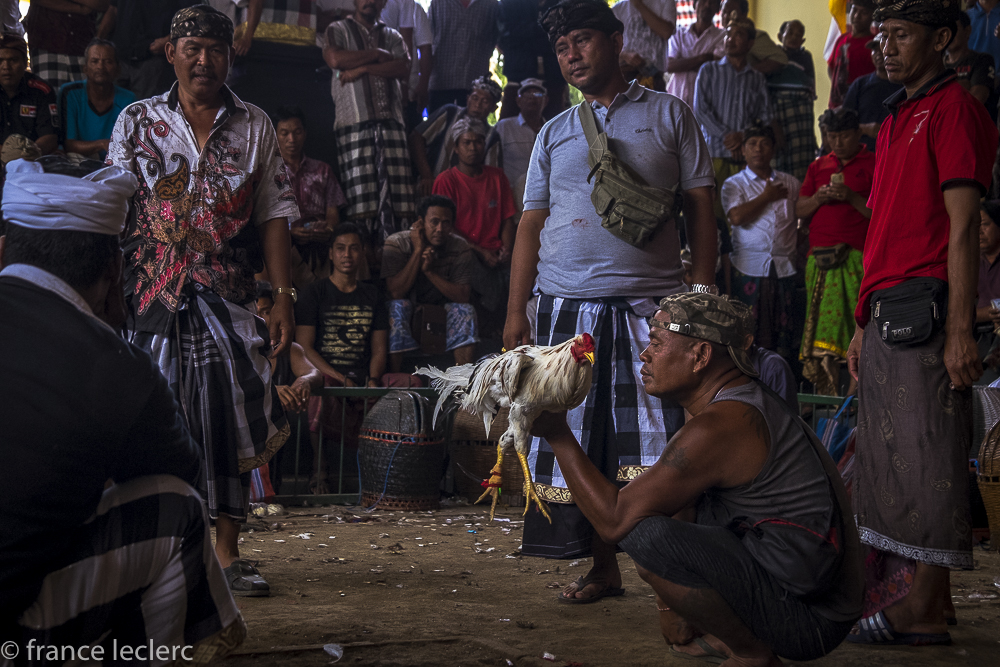 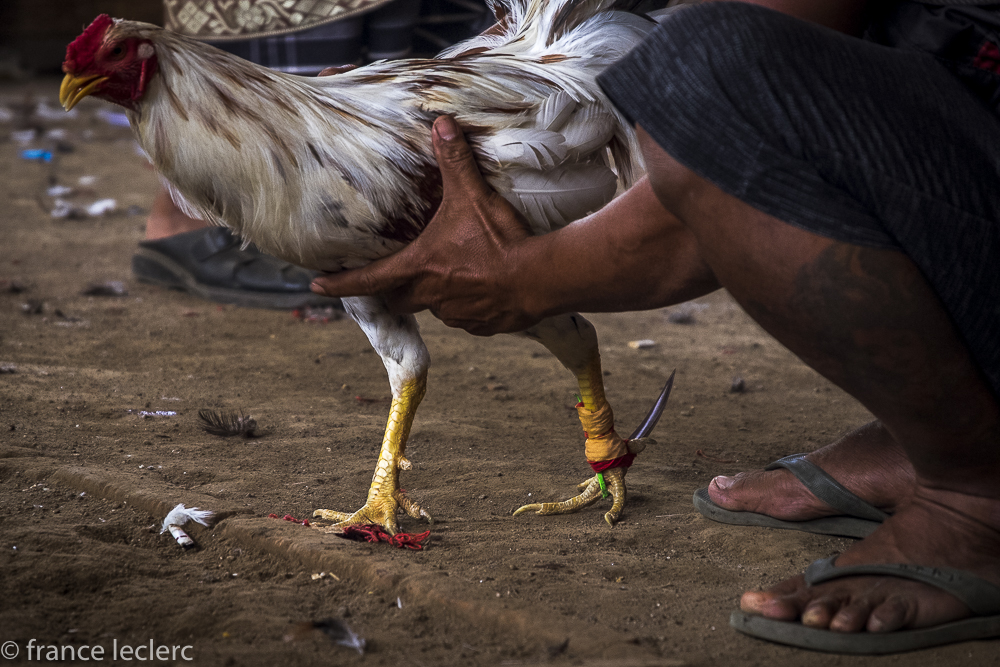 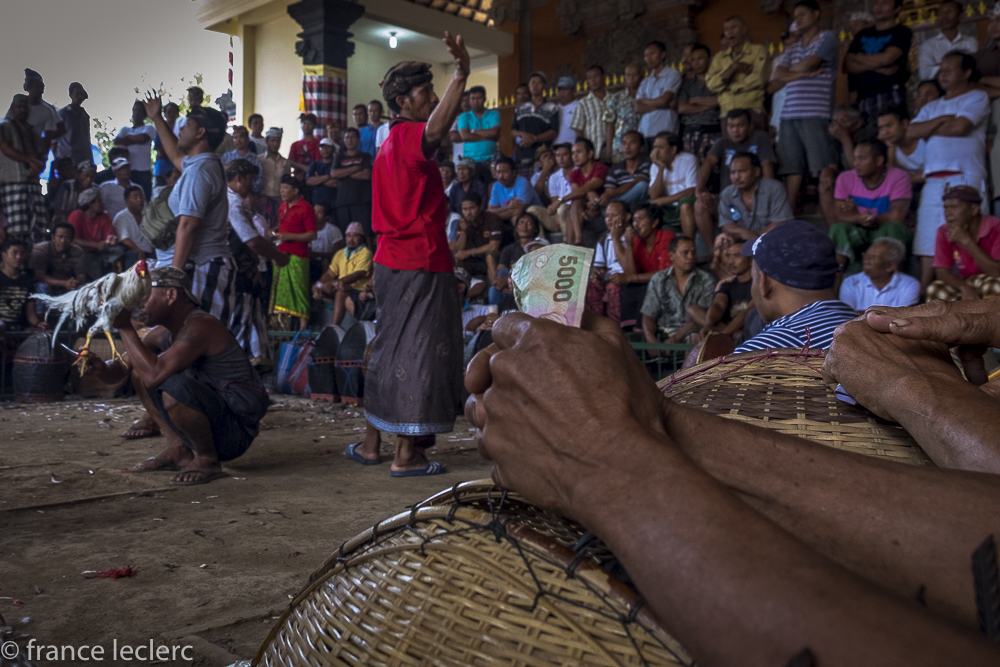 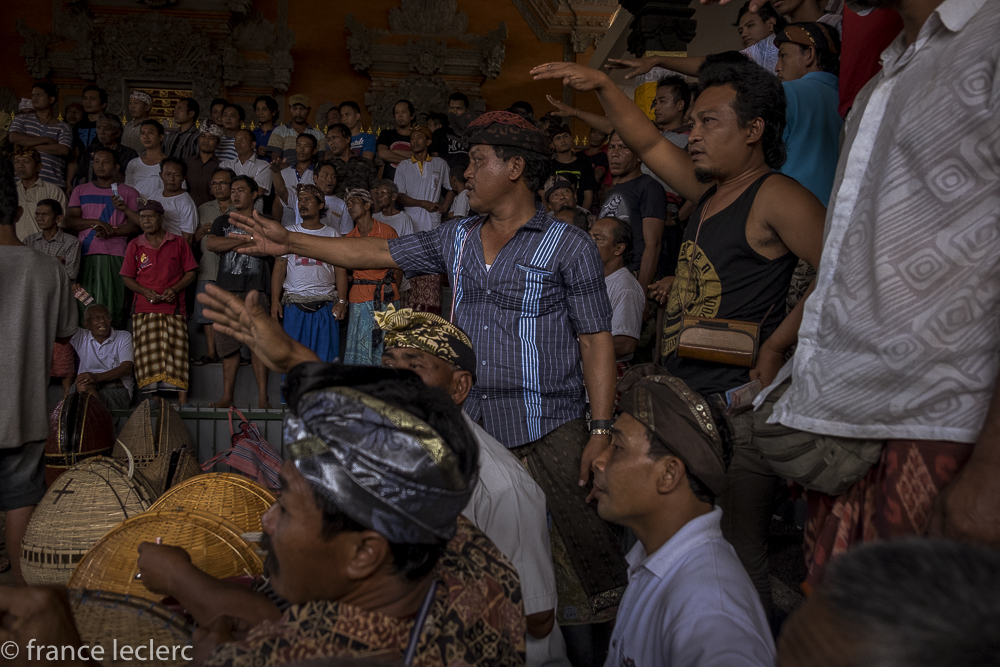 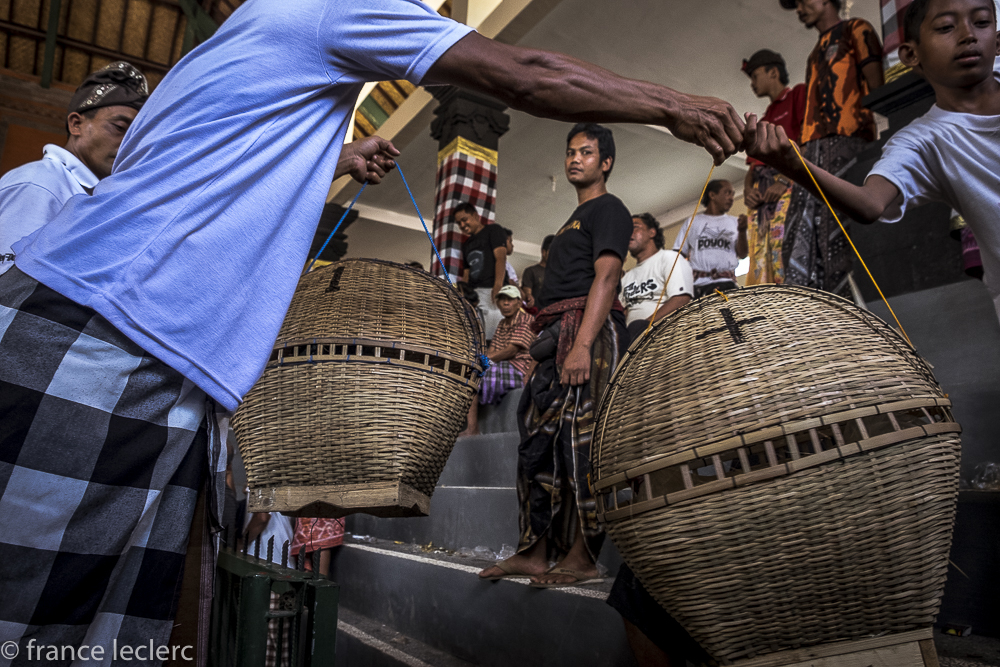 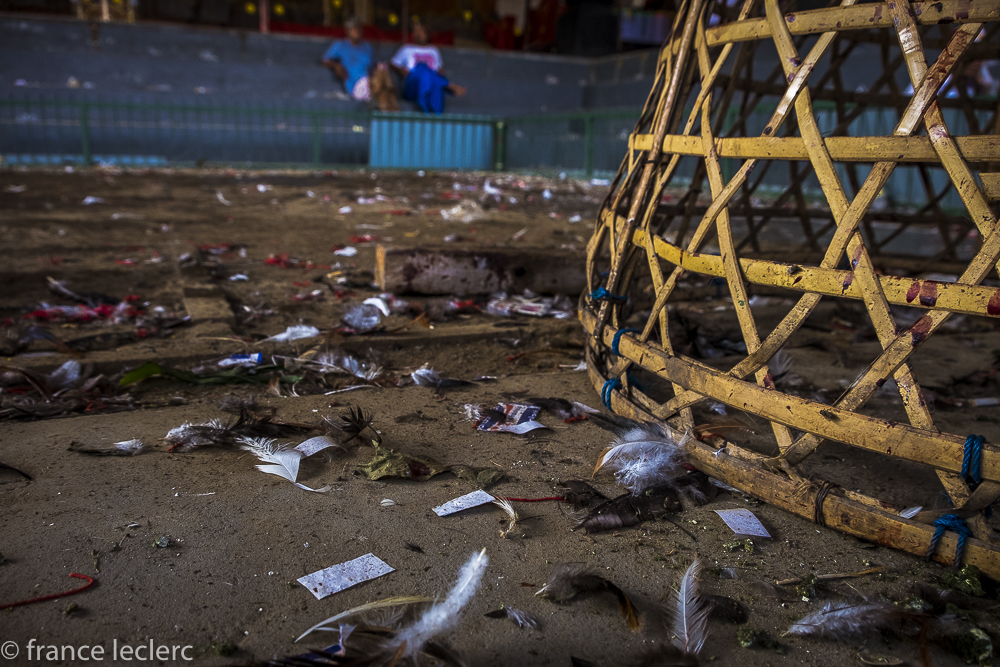 By the end of the day, I am quite convinced that not all the cockfighting in Bali is done for religious reasons.  But even though this is an activity that seems rather barbaric to a lot of us, there is no denying that it is an integral part of the “Balinese way of life”.