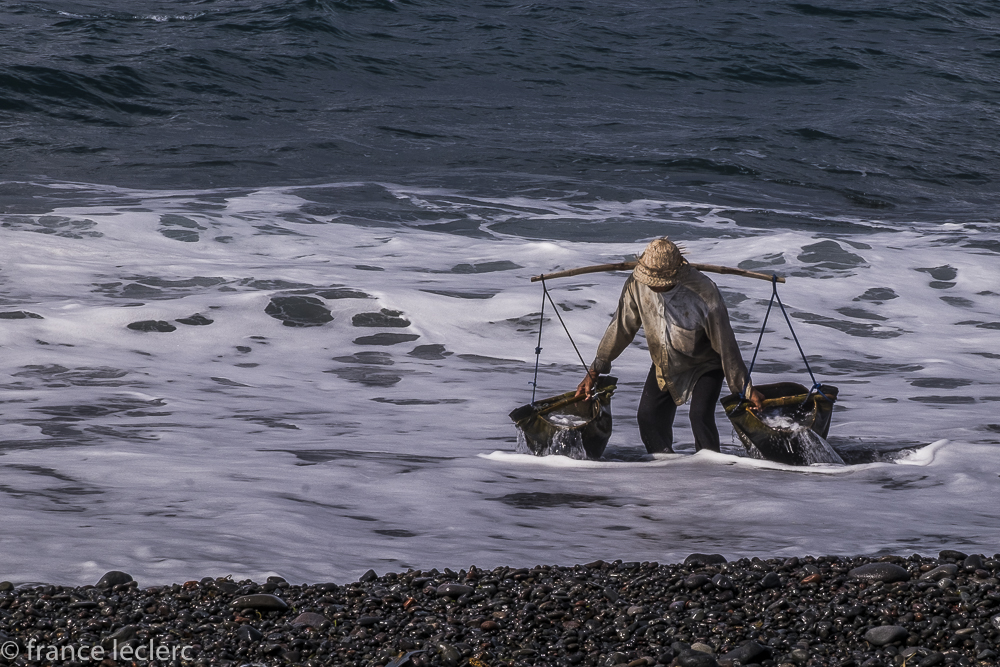 “There must be something sacred in salt. It is in our tears and in the sea” Kahlil Gibran

Ah, Bali!!! For most people, the mere mention of the word evokes thoughts of an exotic paradise with palm trees and beautiful beaches where one can relax all day. But, for people like me who are not very good at sunbathing, Bali, nicknamed “the Island of the Gods”, conjures images of Hindu temples, daily offerings, worship ceremonies, and colorful processions. Bali is all of these things and much more. And for this first post on Bali, surprisingly for me, I will focus on its beaches, though not the ones where vacationers relax. The beaches that caught my interest were the ones of Kumbasa where people harvest salt from the sea.

Kumbasa is a Balinese traditional fishing village on the eastern part of the island sitting on the Indian Ocean. There, a small number of salt farmers are still harvesting salt in the traditional way. Among them are a 50 year-old man named Kaplag and his wife Sekar, who have been salt farmers all their lives, just as Kaplag’s parents were. I had seen salt harvesting from salt flats in other locales, but the Balinese way is quite different.

Early morning, Kaplag makes repeated trips to the ocean with a bamboo pole on his shoulder to which two leather buckets are attached. He fills the buckets to the brim with seawater and brings back his heavy load to an area of raked sand. He has learned to walk with small steps, one foot neatly ahead of the other, so as to neither spill the water nor disturb the sand.   Kaplag then splashes the seawater in a rhythmic motion, so that just enough water is spilled at a given spot. Then the Indonesian sun takes over the process by “baking” the sand into flakes from which the salt is to be harvested. 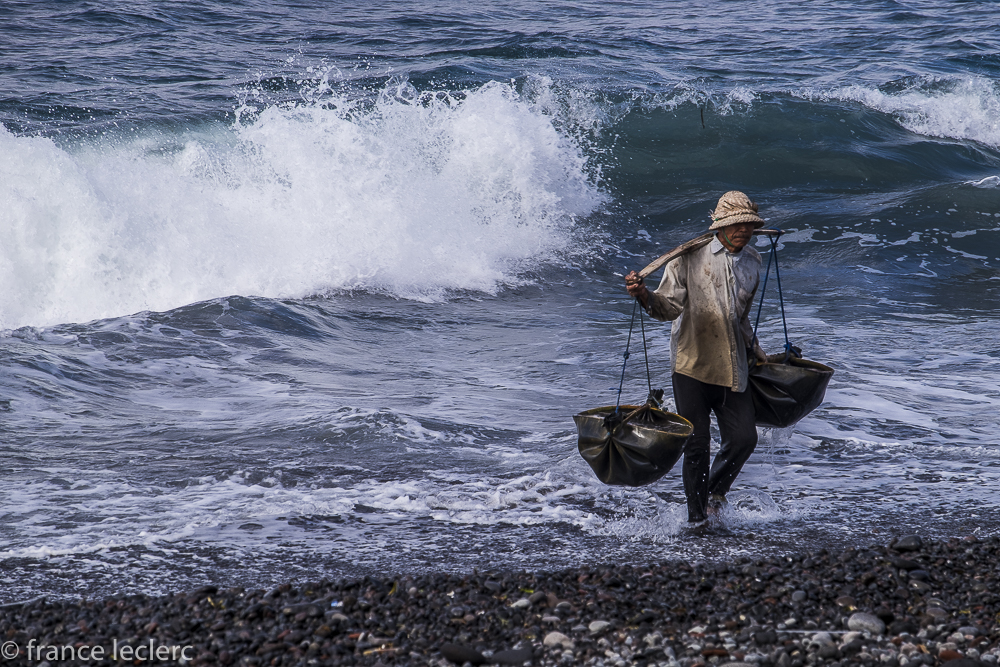 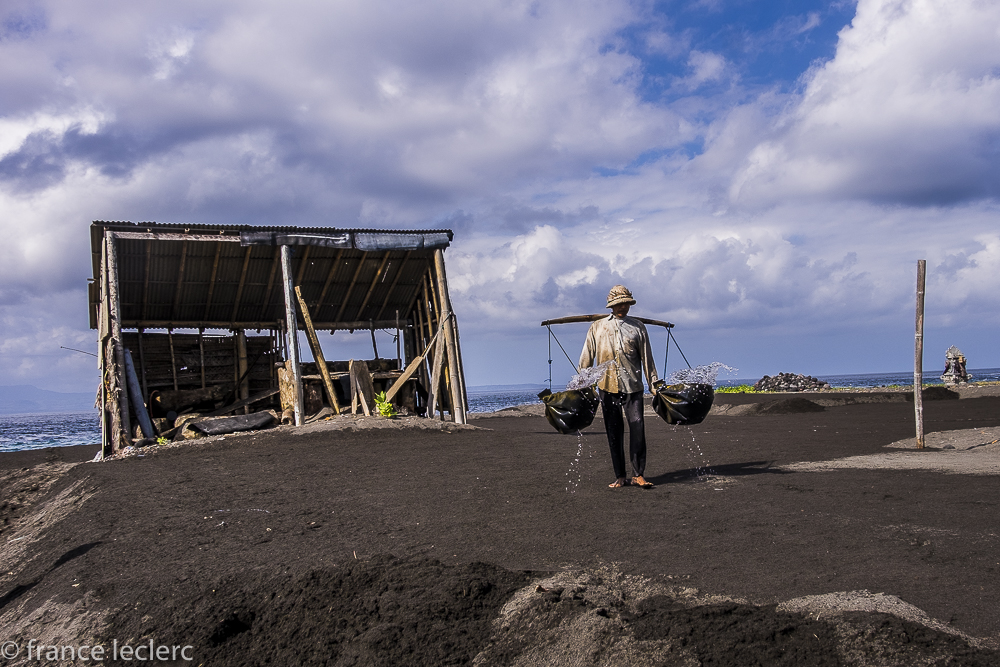 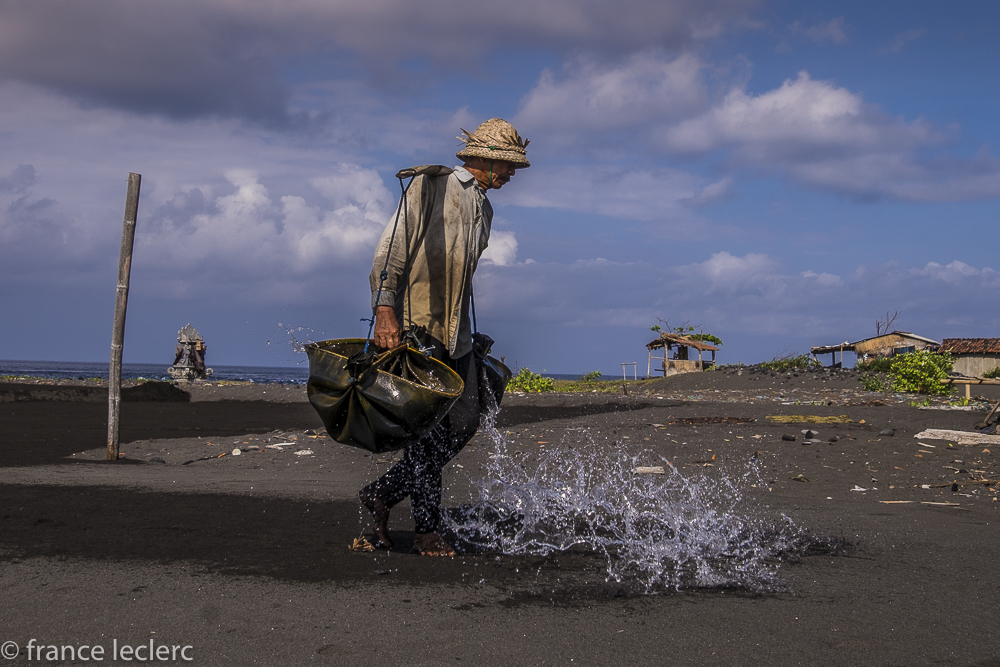 Early afternoon, Kaplag and Sekar collect the thin flakes that they put in a large wooden drum inside a small shaky hut on the beach. The sand is then carefully raked again to be ready for the next day.   Kaplag repeatedly washes the salt flakes with fresh water to create saltwater brine through what looks like a miniature canal system. The brine is then poured over long table-like structures where the sun can do its final magic, and through evaporation, the brine is transformed into crystals. Depending on the strength of the sun, this process can take multiple days. 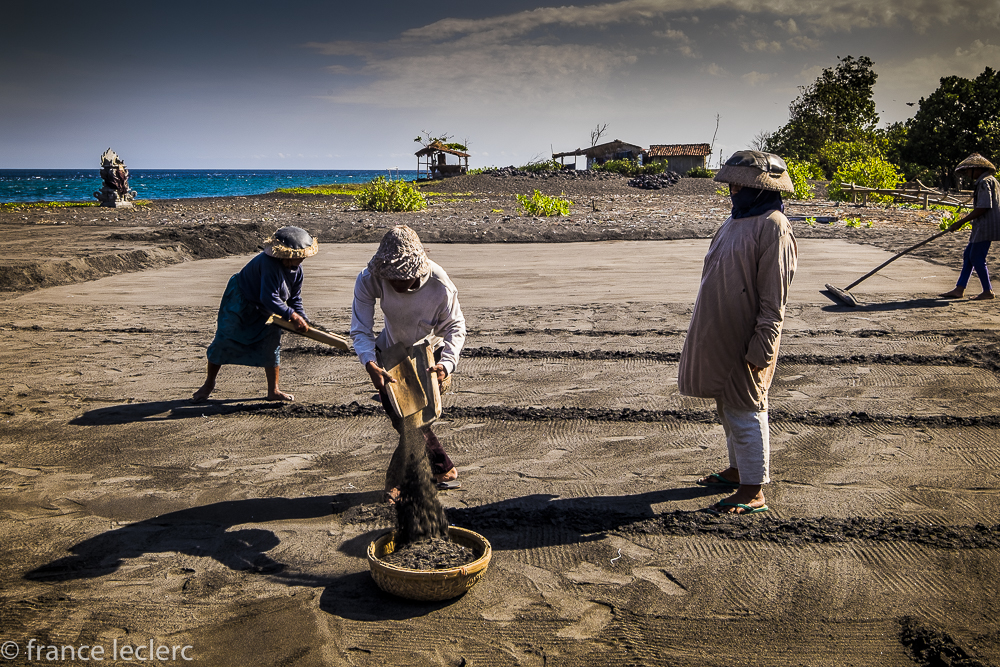 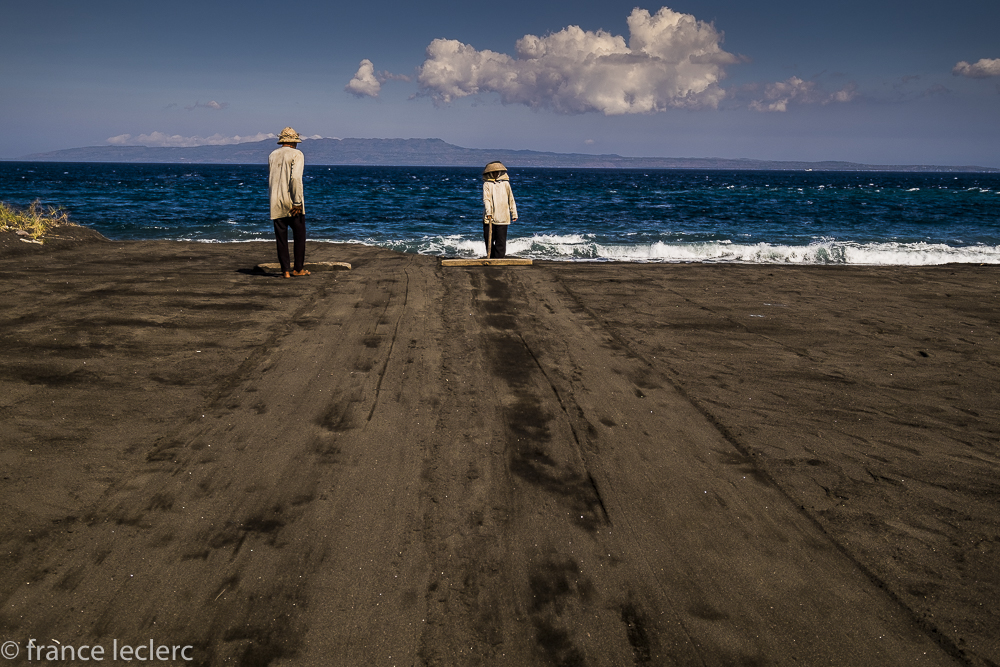 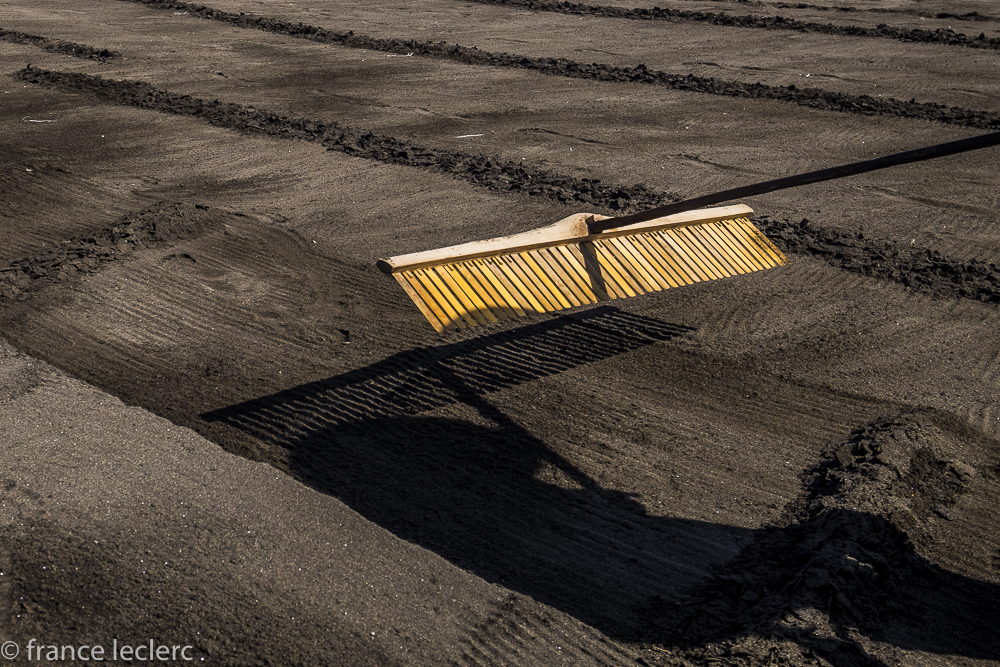 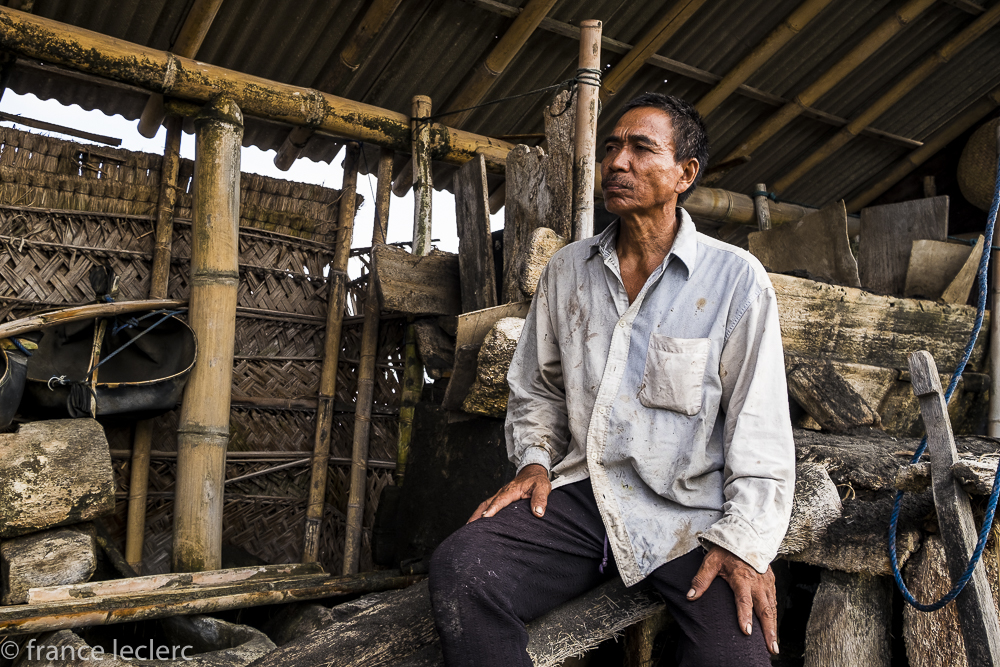 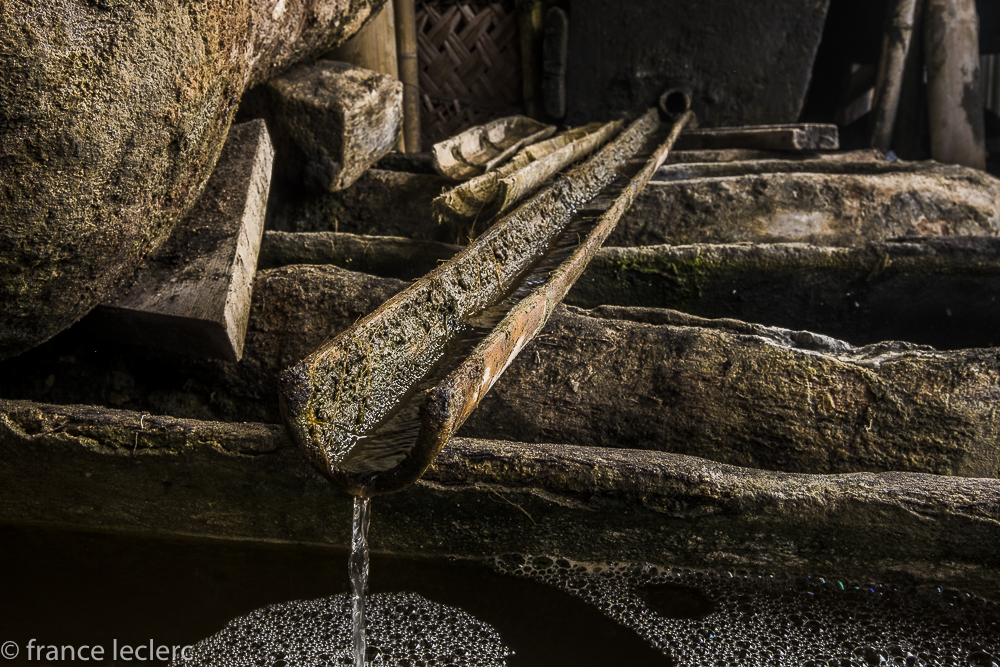 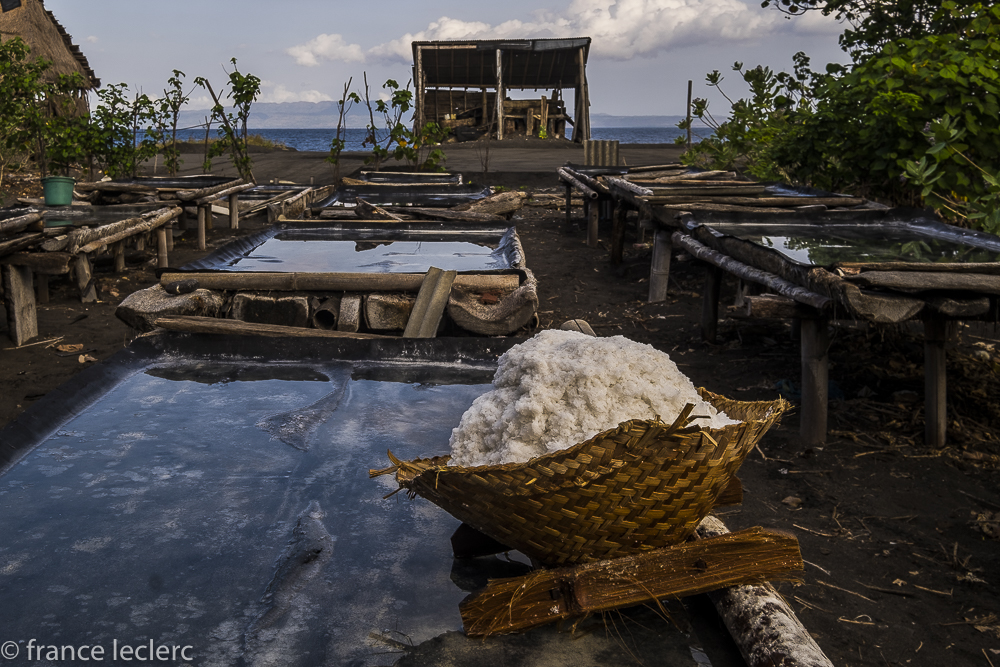 When the crystals are formed, Sekar takes over and scrapes the grains of salt with a bamboo-leaf cone and a coconut shell. The salt is then ready to be sold to the “salt collectors” that show up at the end of each day. Sekar uses a blue container to measure the yield and its contents (about one kilo) will sell for 5,000 Indonesian rupiahs (about 50 cents). Kaplag and Sekar produce about 15 of these containers on a good day. 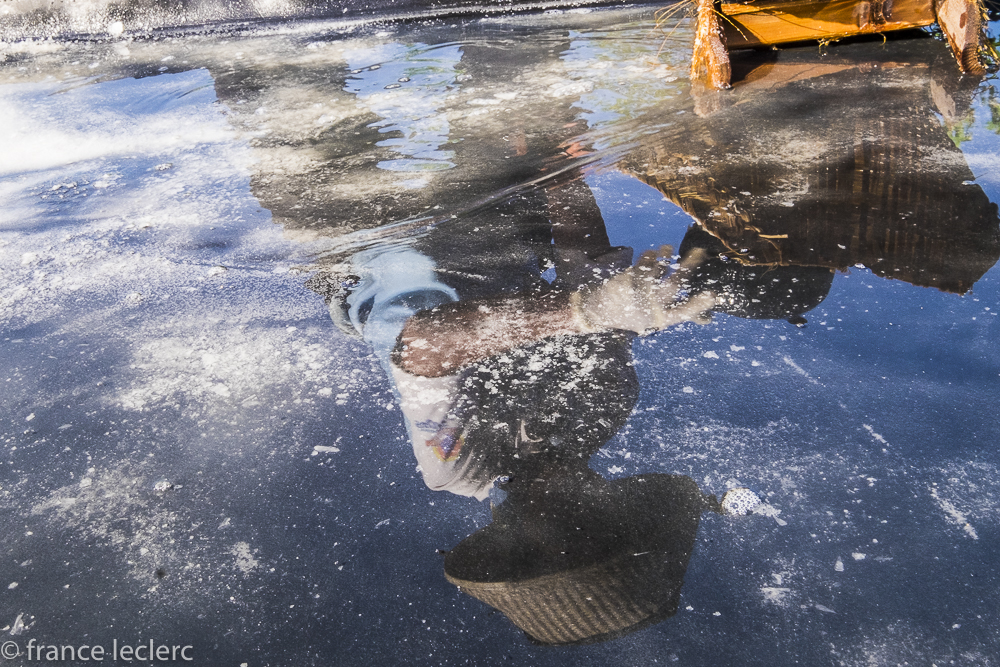 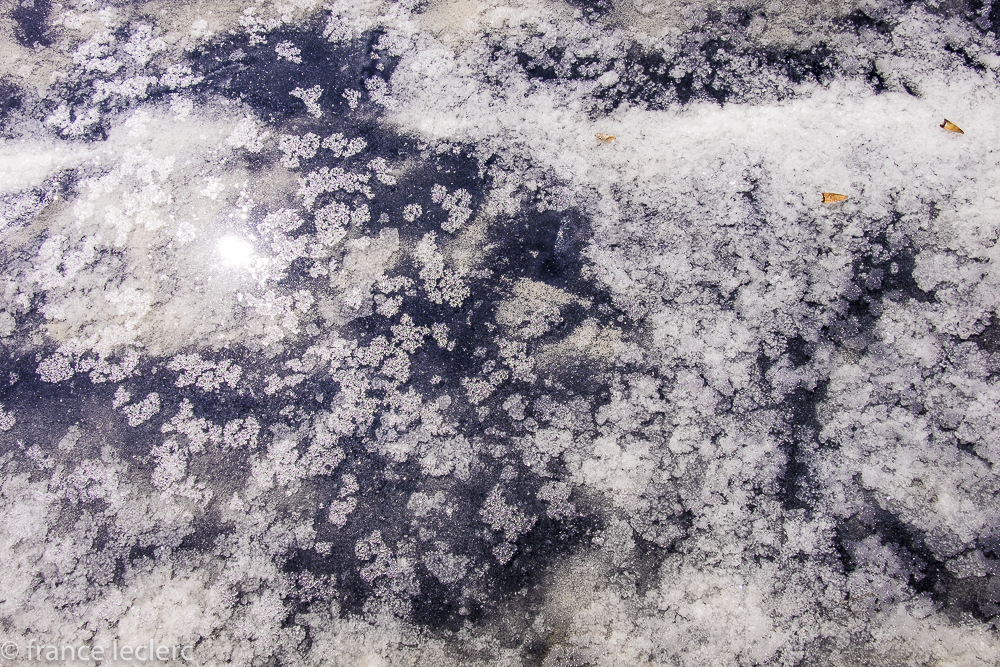 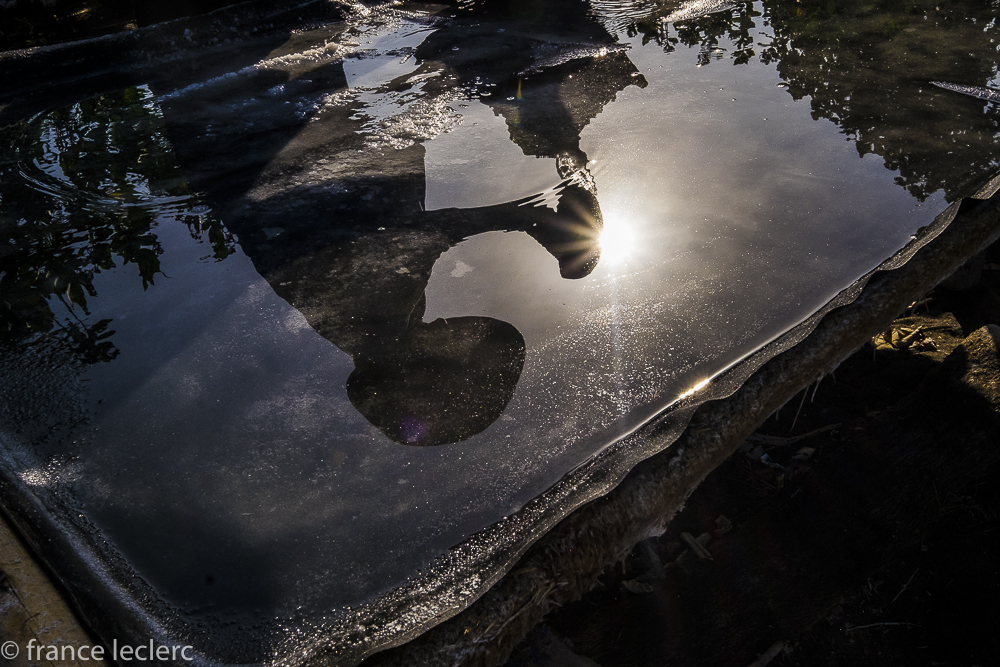 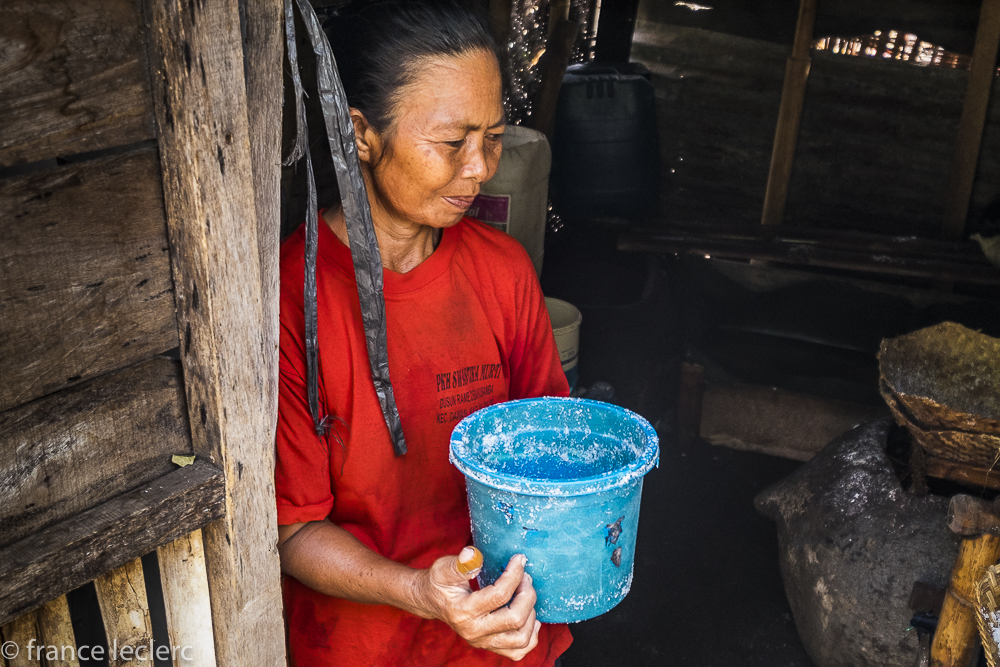 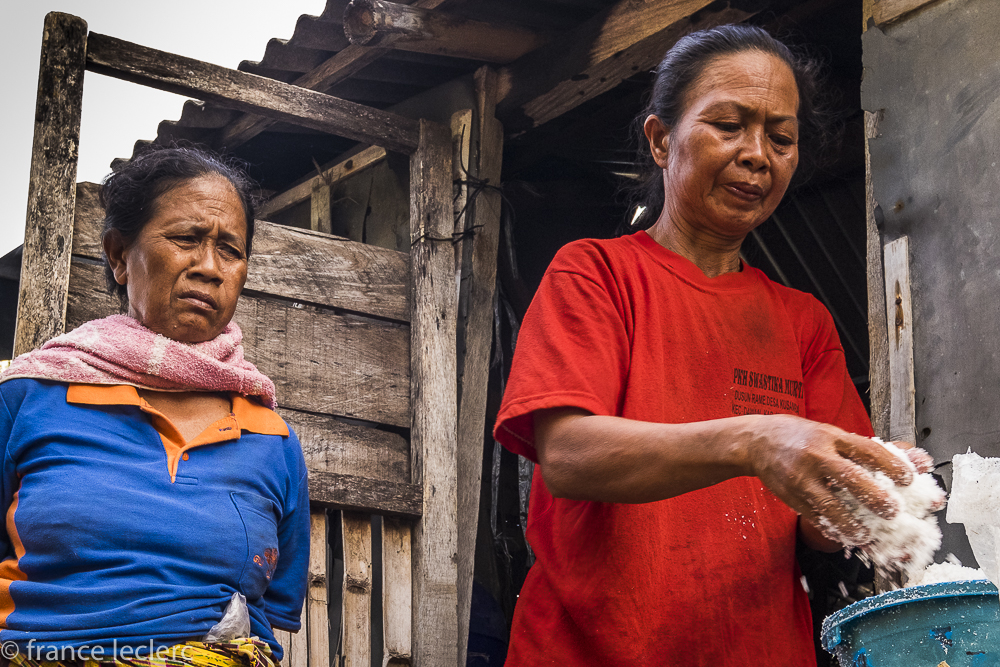 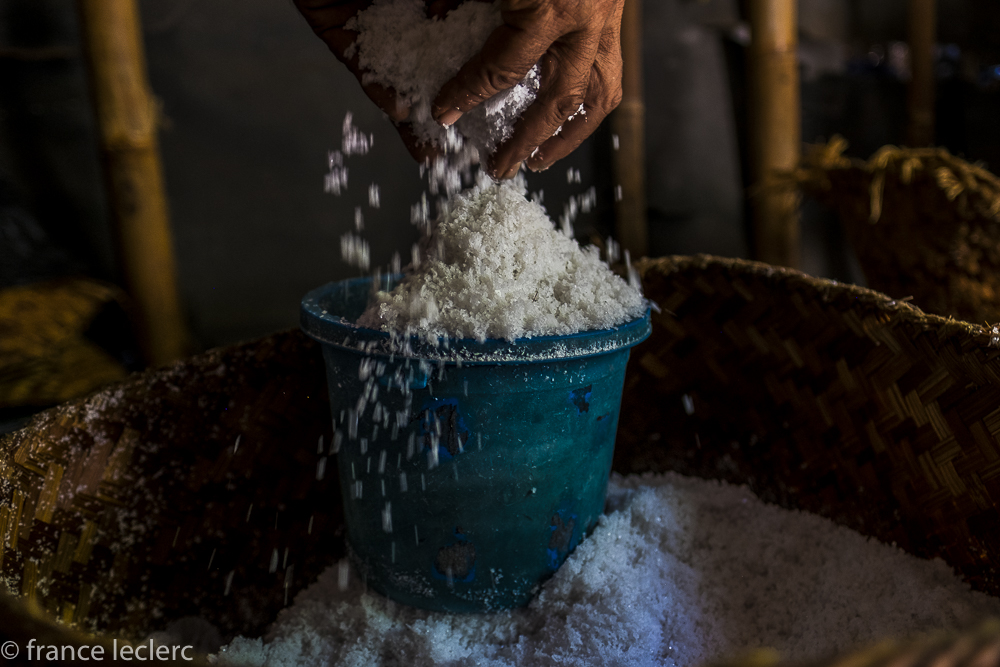 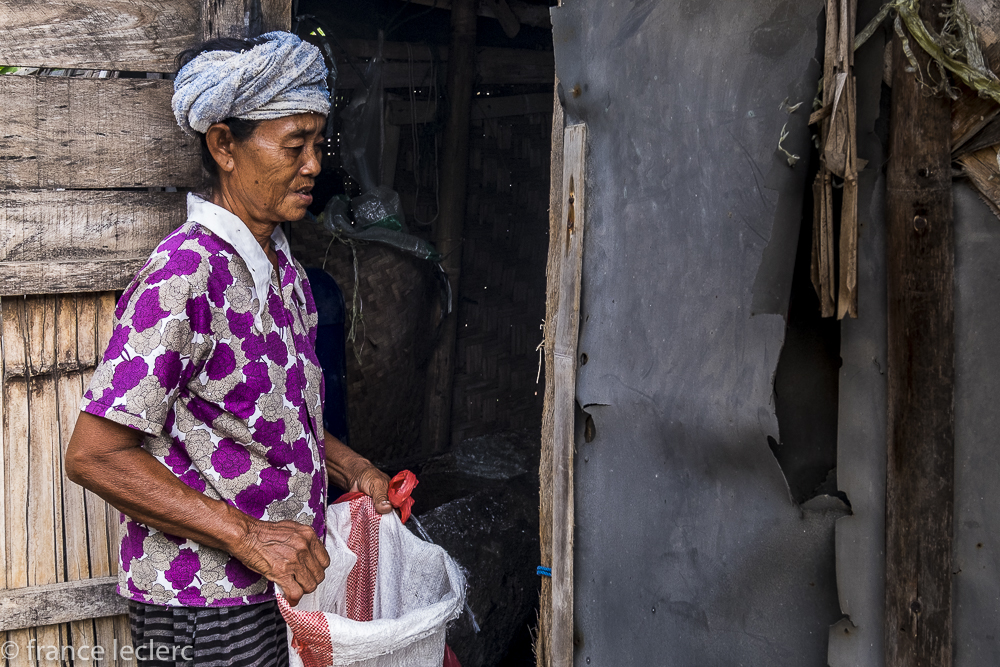 Kaplag’s mother and sister also contribute to the family’s income, but not directly in the salt-making process. They both weave mats out of bamboo leaves that they then sell. They also taking care of the few animals the family owns, a few chickens, and a couple of pigs. 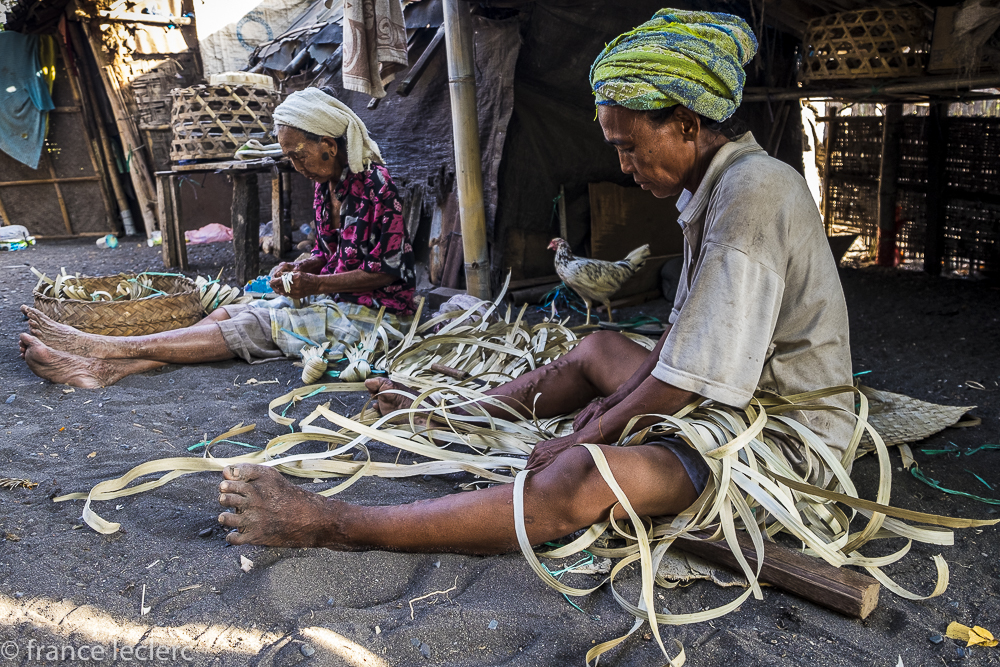 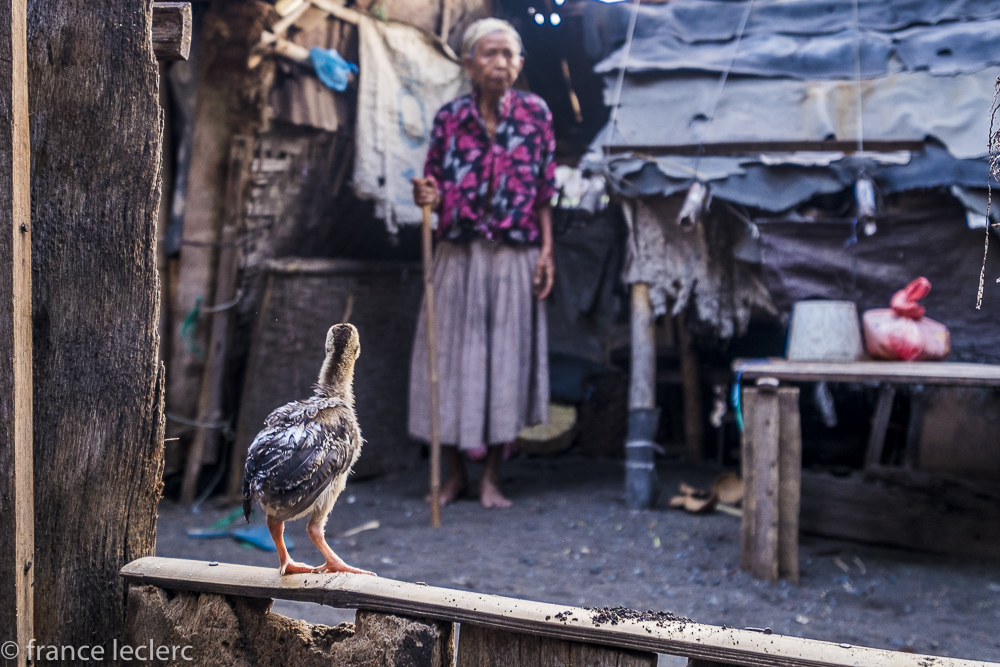 There is no doubt that salt harvesting is a labor-intensive process that produces a very small yield. Although the high-quality salt harvested will eventually sell at a high price to some salt connoisseur, sadly Kaplag and Sekar do not see much financial return for their hard work. In fact, Kaplag and Sekar are the last generations of salt makers in the family. None of their three children will follow in Kaplag’s tiny footsteps on the raked sank of Kumbasa beach. 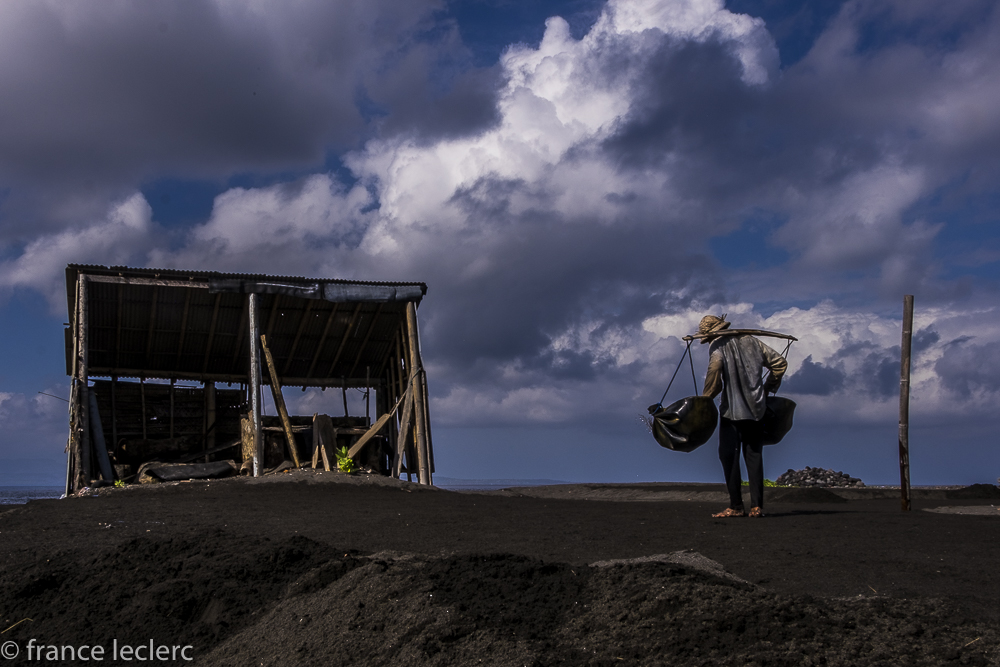