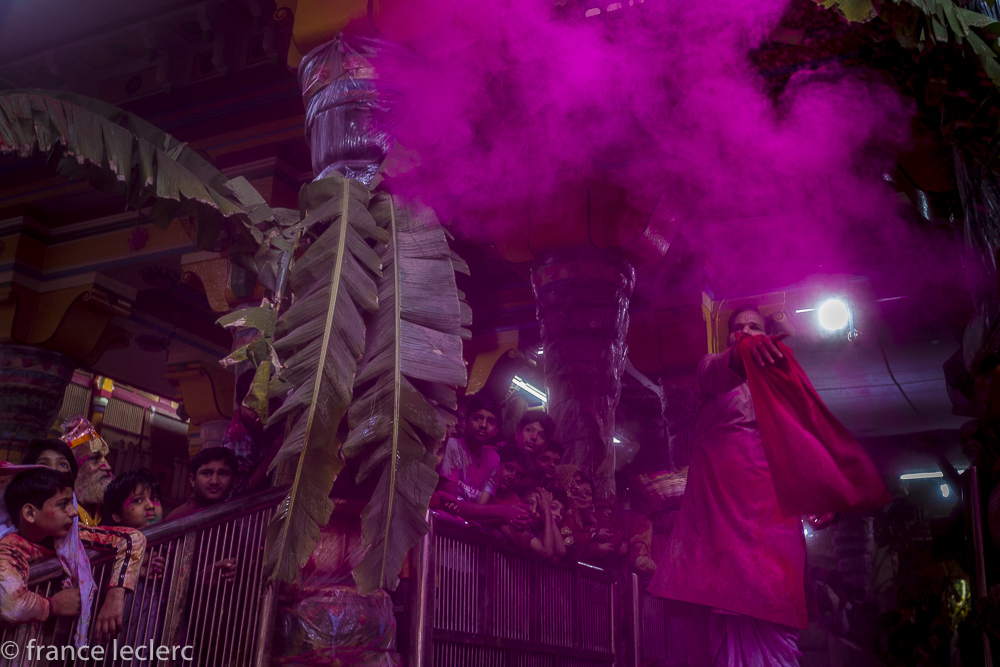 Holi is a tradition that is now being embraced all over the world. Mischievously throwing colors at friends and fellow revelers has become a thing to do to celebrate the arrival of spring. But, of course, the place to celebrate it is in India where this festival of colors originated. So this is where I was about two months ago, ready for my first Holi experience (maybe even a Holy one) playing down in my mind the warnings by Holi-veteran friends that photographing Holi is quite a challenge.

As do other Indian festivals, the Holi celebration draws on religious legends, and in this case two of them are quite relevant to its practices. Essentially, the word Holi comes from Holika, the evil sister of a Machiavellian king, who tried to kill the king’s beloved son by burning him in a fire. But things went badly for her and she ended up burning herself in the fire while the son survived. So every year, the victory of good against evil is remembered by the burning of a bonfire with the resulting ashes (and now colored powder) being rub on people’s cheeks for good luck.

But my favorite Holi legend is the second one (who can resist a love story?) It is believed that young blue-skinned Krishna was in love with the fair Radha but he was afraid that his love would not be returned because of his dark skin. Krishna’s mother (wise as all mothers are), seeing his despair, advised her sons to color Radha’s face. This he does, and Radha and Krishna became a couple. Since then, colors are applied to others as a sign of love and affection.

So I celebrated Holi in Barsana, Nangdaon, Mathura and Vrindavan, locations where Holi has a special significance because of the connections with Radha and Krishna.

It was, needless to say, an intense experience. Getting ready to photograph every day involved diligently wrapping cameras in many coats of plastic wrap and put them inside a protective case (which made it both difficult to see and hard to change camera settings most of the time) and wearing clothes that were brought knowing that they would be left behind. Mixing with the jubilant crowd meant that one would be entirely covered with gulal (the colored powder) in a matter of minutes. And then, of course, excited revelers would use their pikharis (brass water guns) filled with colored water ensuring that every inch of you was fully colored. Although foreigners made an attractive aim, everybody was getting hit. The colorful celebrations in the street also include processions where children dressed as Radha and Krishna (in our case, two chariots had Radha and Krishna, lucky given that one of the Krishnas kept falling asleep) are the main attraction. 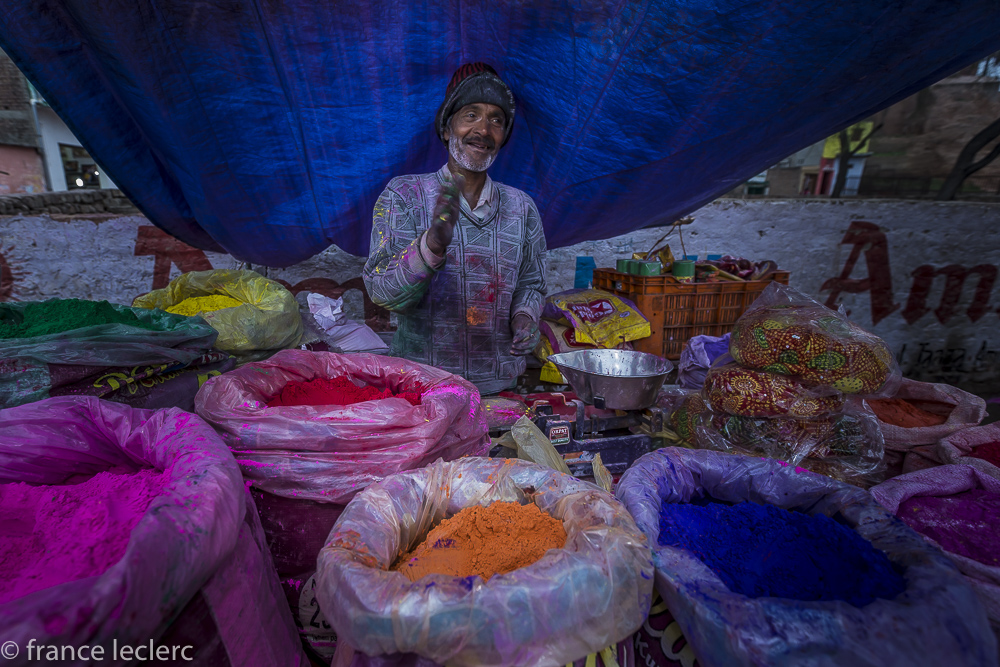 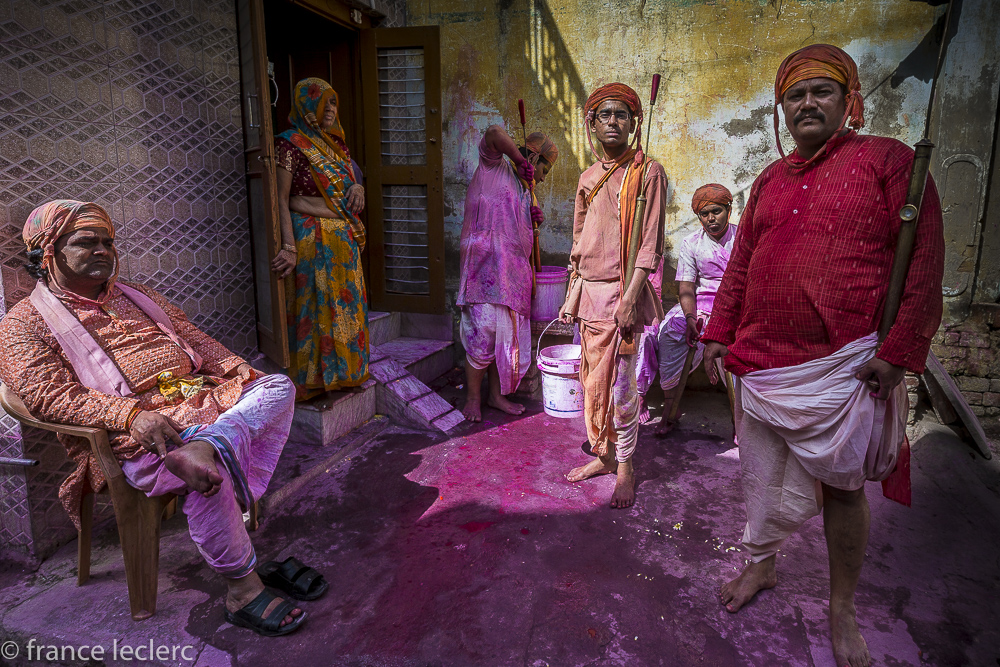 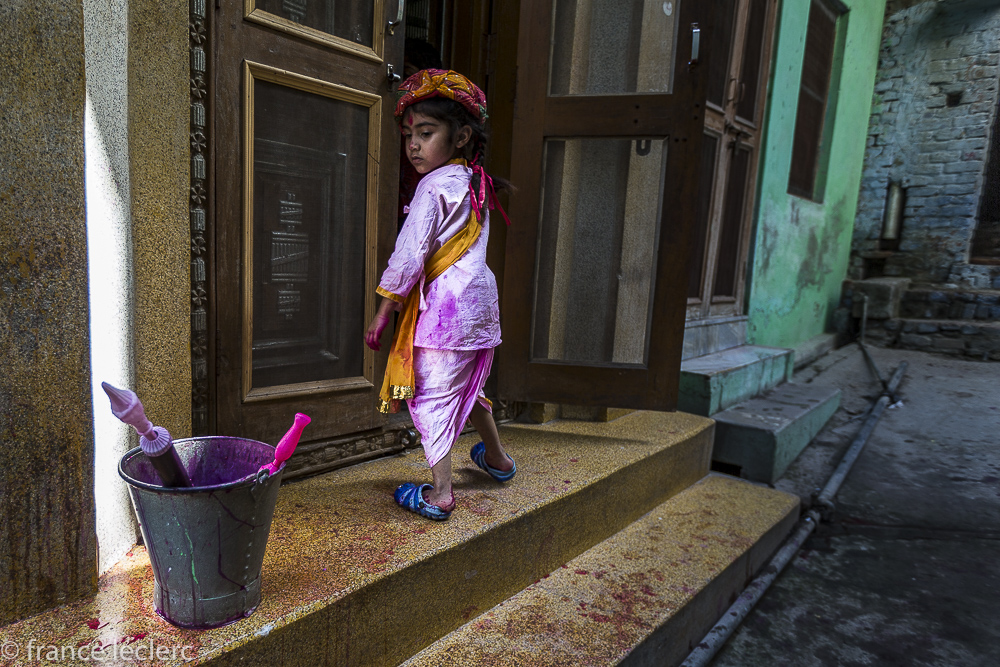 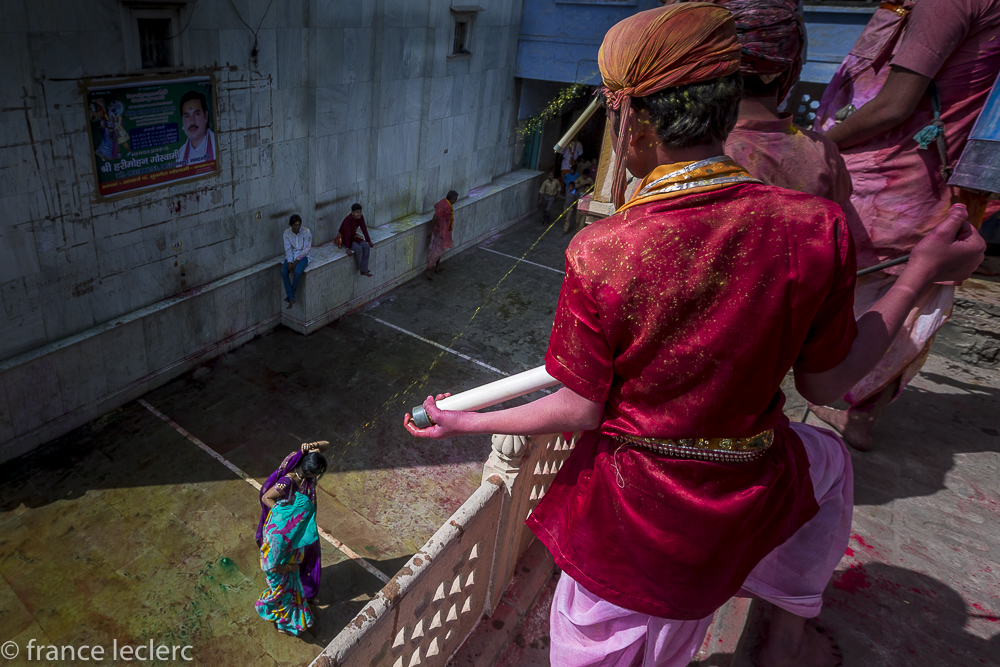 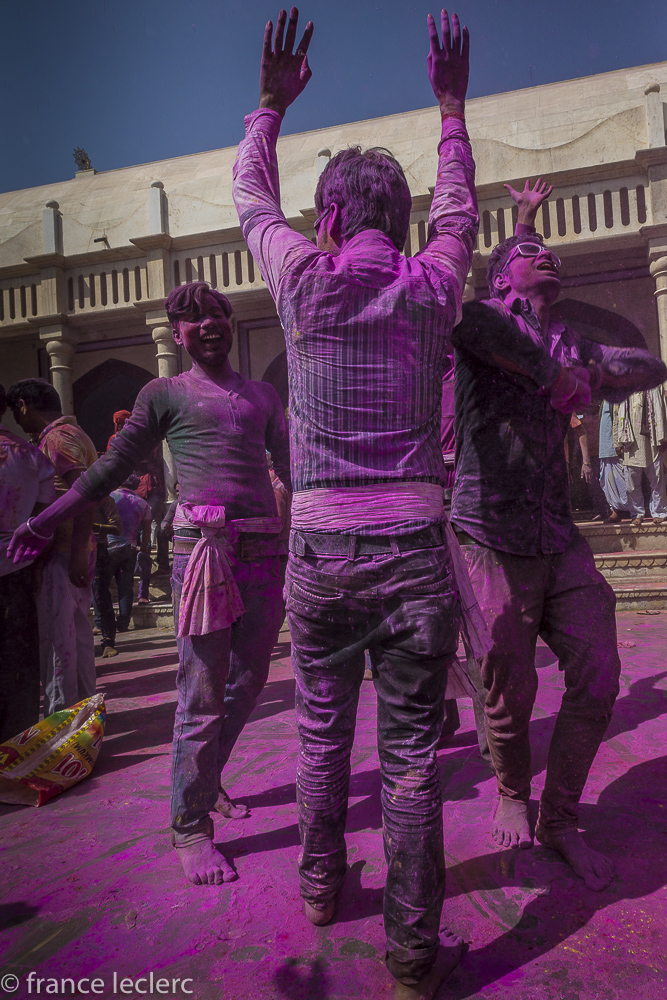 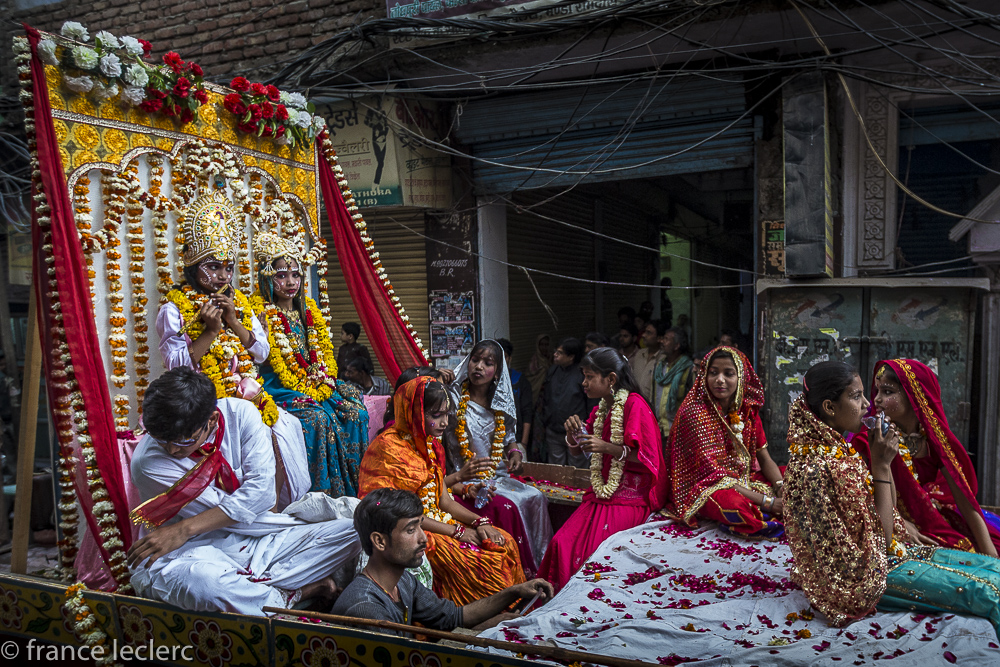 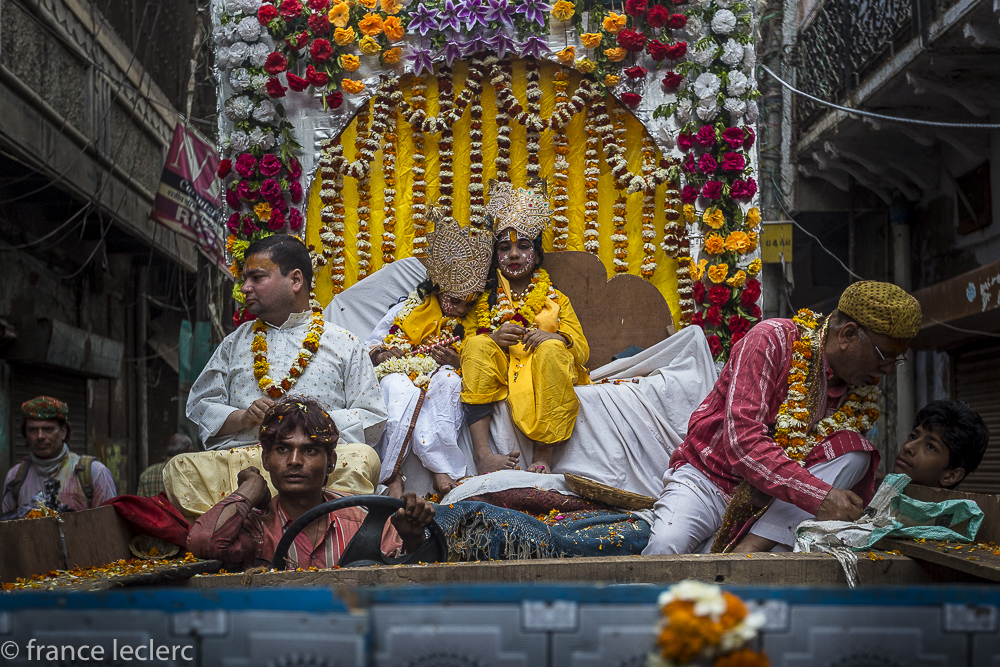 The area I was in is where the famous Lath Mar Holi takes place. Lath Mar Holi (which literally means Holi with sticks) is celebrated by women having a chance to hit men repeatedly with bamboo sticks (I can see some appeal to this concept!). Men in traditional dress from the nearby Nandgaon Village come to Barsana, the birthplace of Radha, and act as gopas (friends of Krishna). Their hope is to raise their flag over the temple of Radha. But women in Barsana play the role of gopis (friends of Radha) and great the men with sticks. Smart enough, men come fully padded and armed with shields. They know what is in the cards for them and are forbidden to retaliate on that day. The next day, it is the turn of the men of Barsana to reciprocate by invading the temple of Nandgaon while the gopis await them sticks in hand. 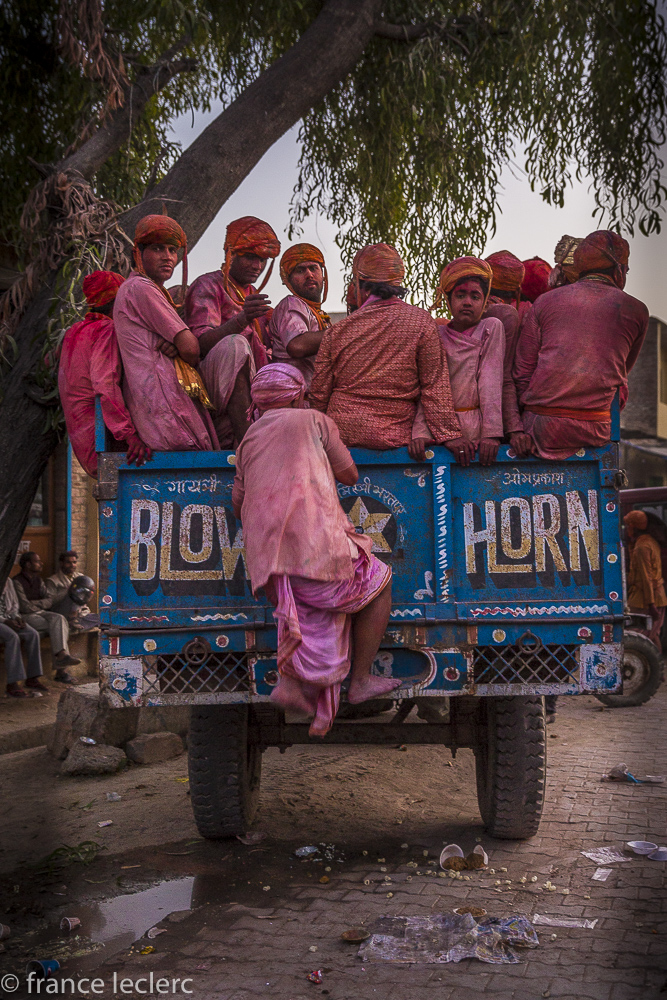 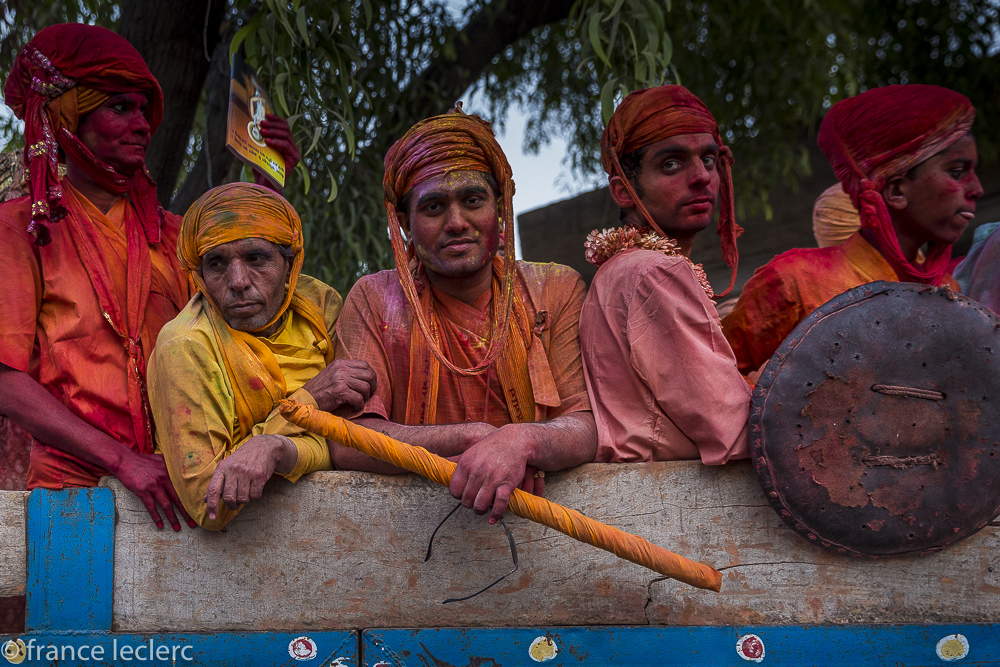 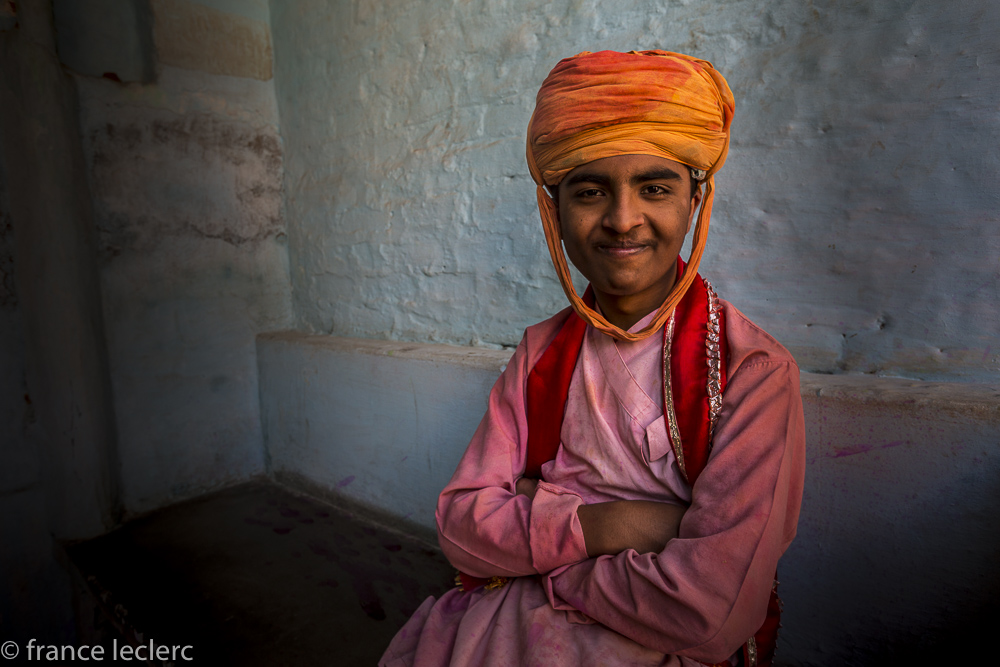 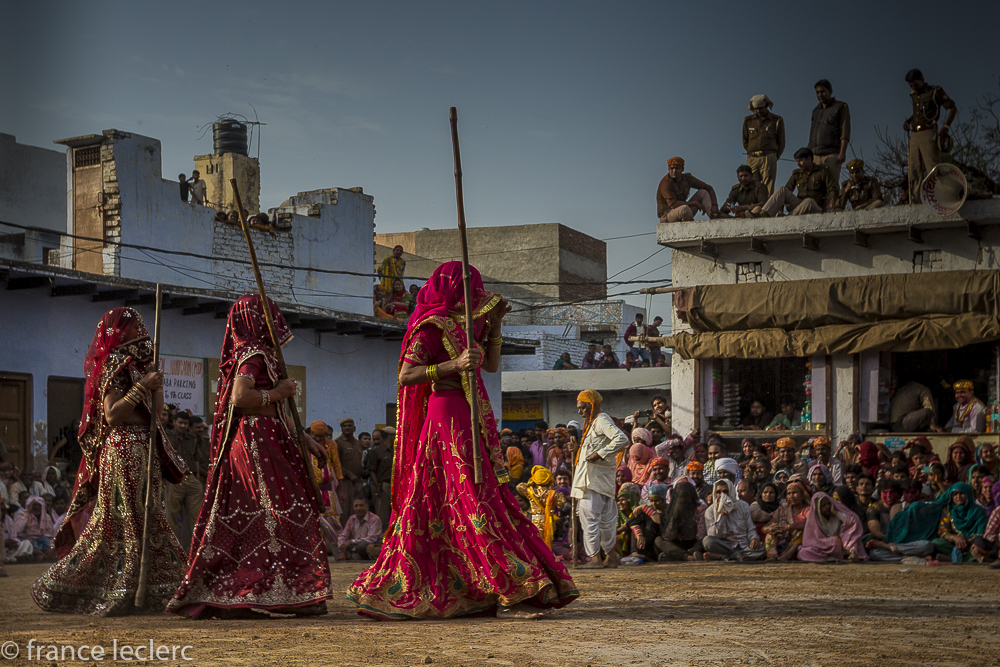 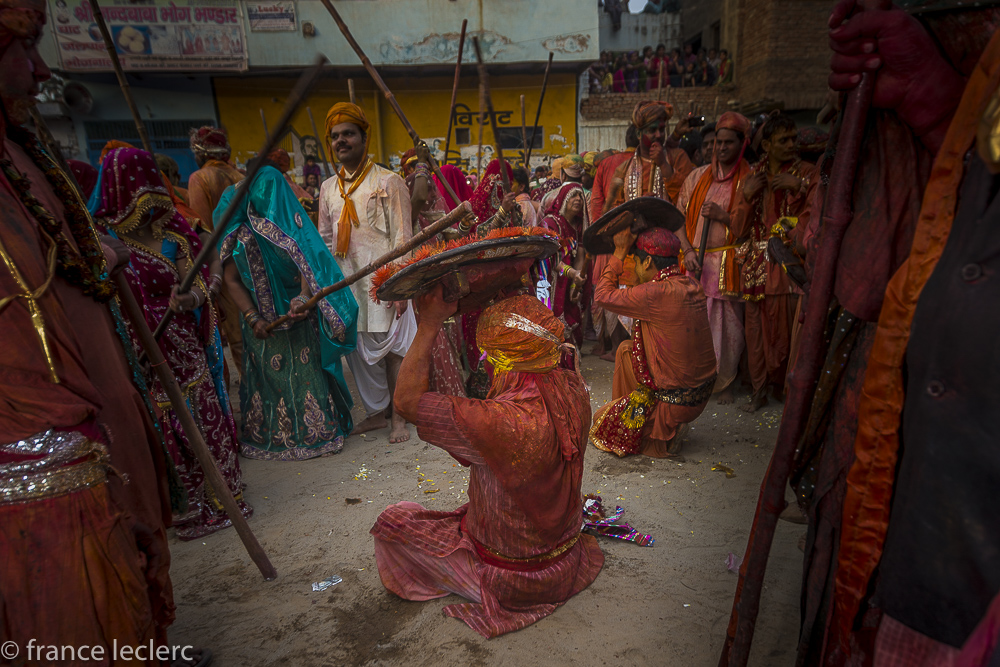 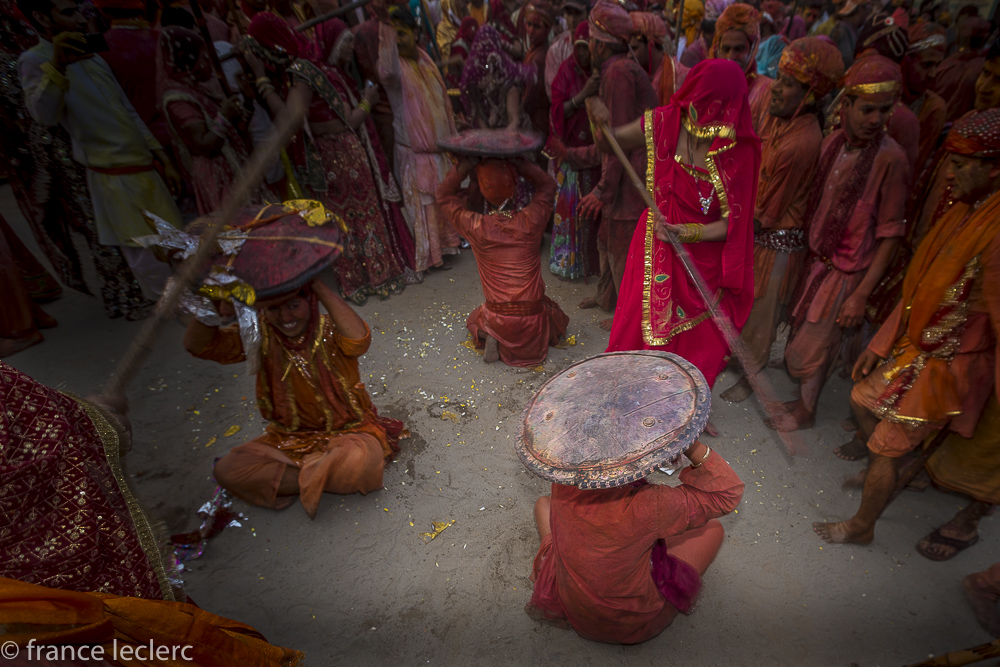 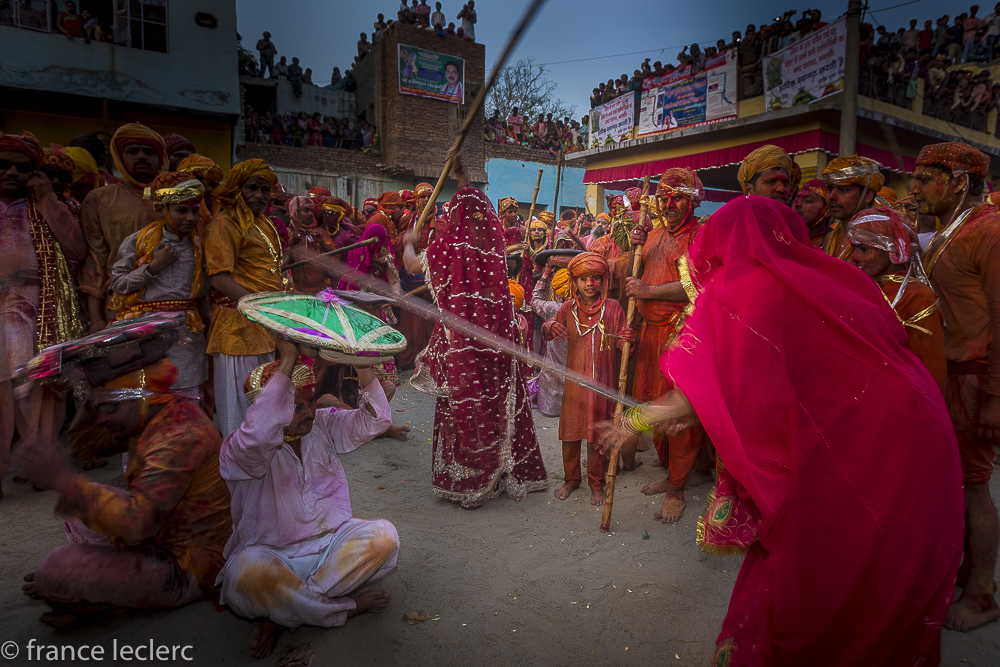 Though the celebrations in the streets were pretty joyful (and colorful), it was the experiences at the temples that were the most memorable. Temples are filled to the brim, particularly the Bankey Bihari Temple in Vrindavan, famous for its strong bonding with Lord Krishna. Getting into the temples involved walking barefoot, as always, on paths and stairs rendered slippery by the colored powder and water mixture all while surrounded by more people thanÂ you would think could possibly fit in the space. One can feel the intensity of the devotion. Inside, Hindu priests are armed with color powder they throw at pilgrims as a blessing and use their pikharis to drench their devotees. The euphoria that follows is beyond imagination. 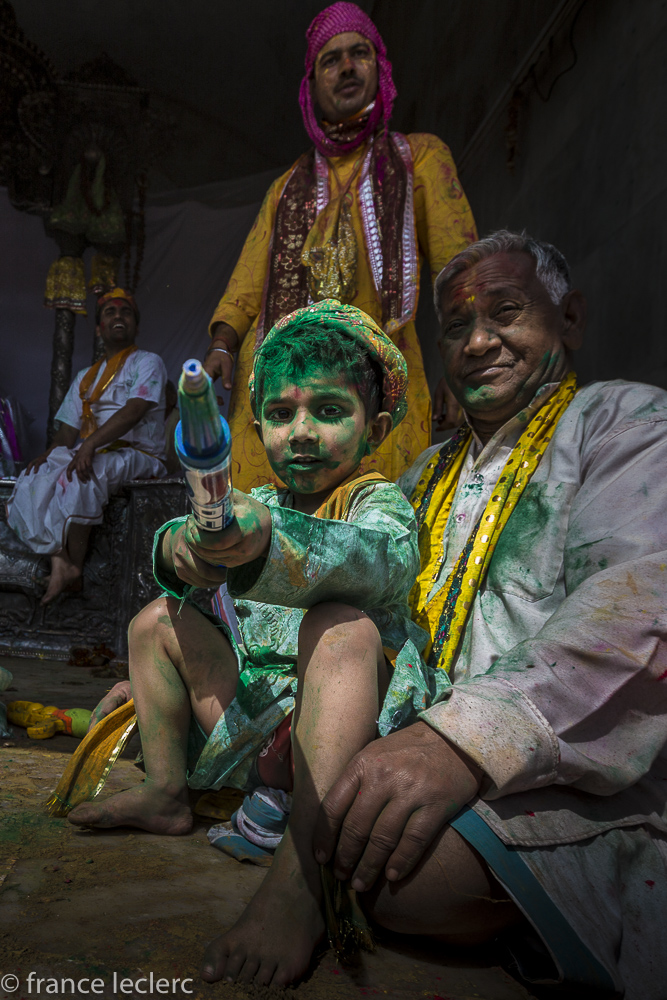 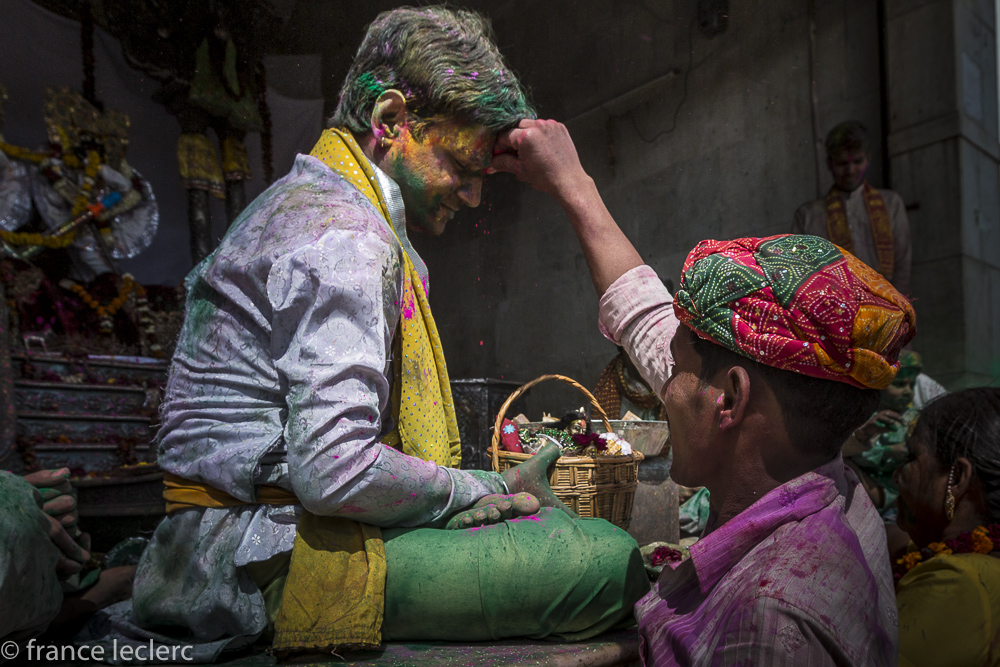 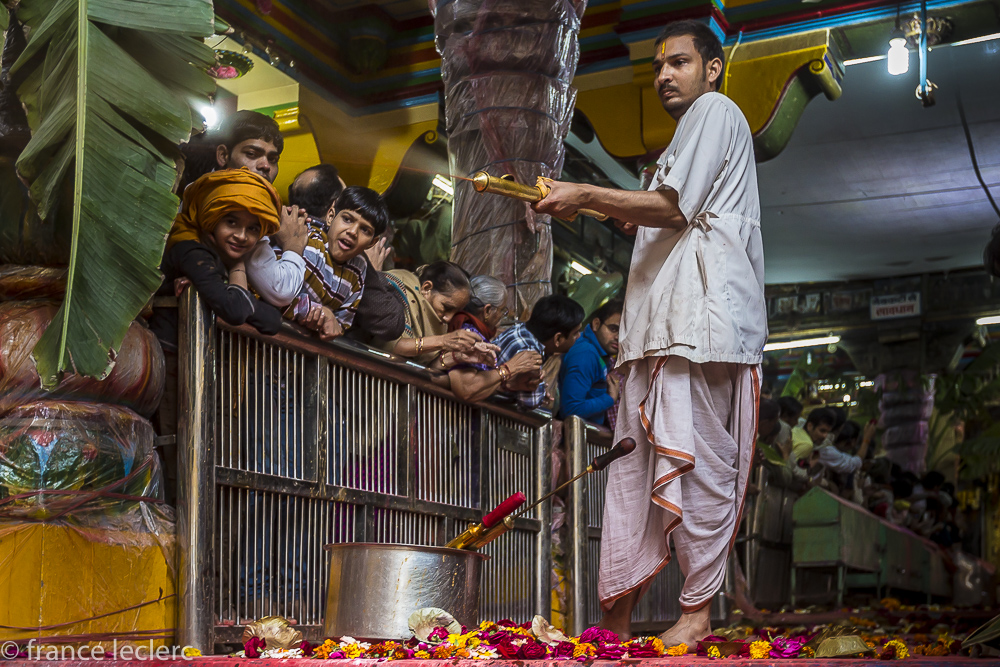 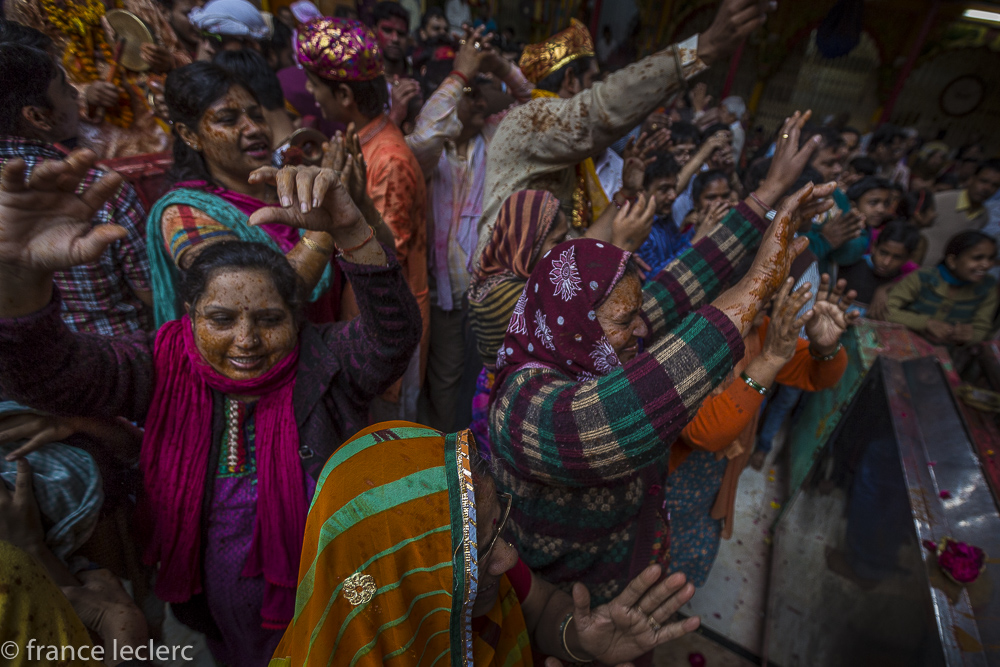 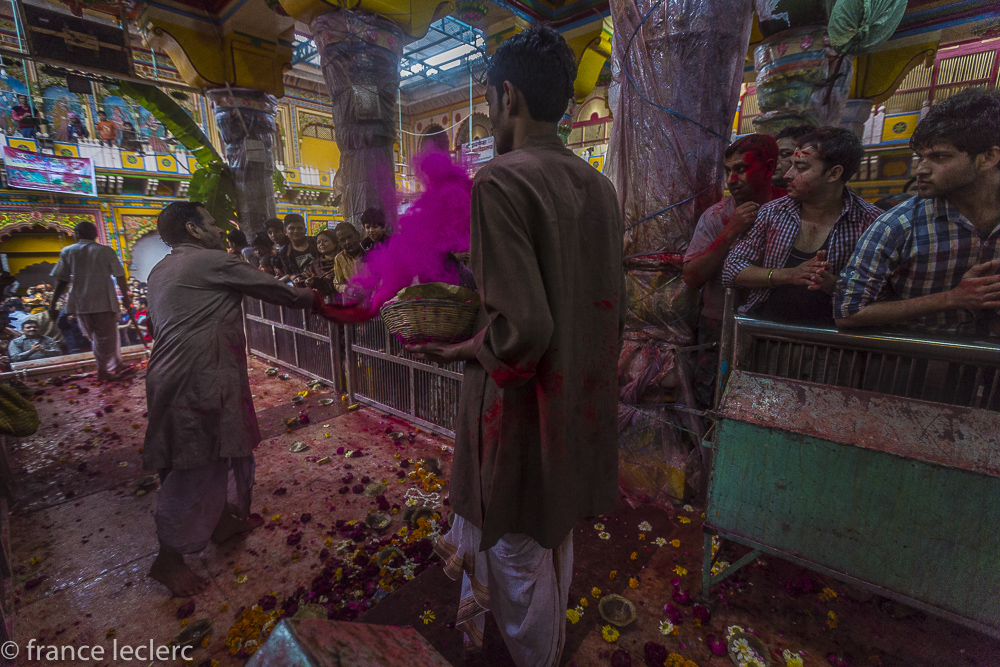 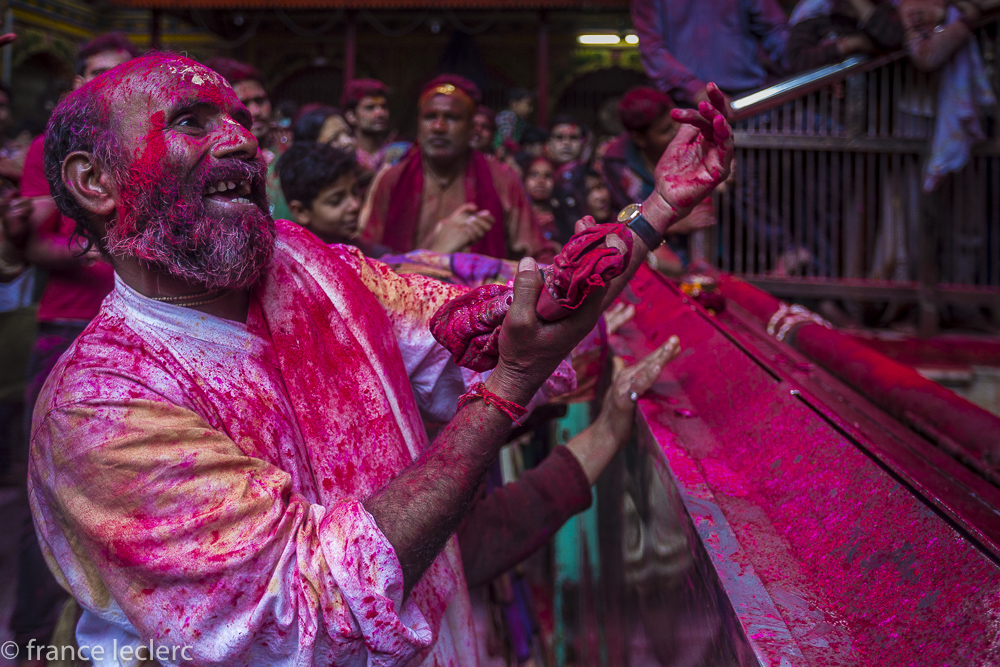 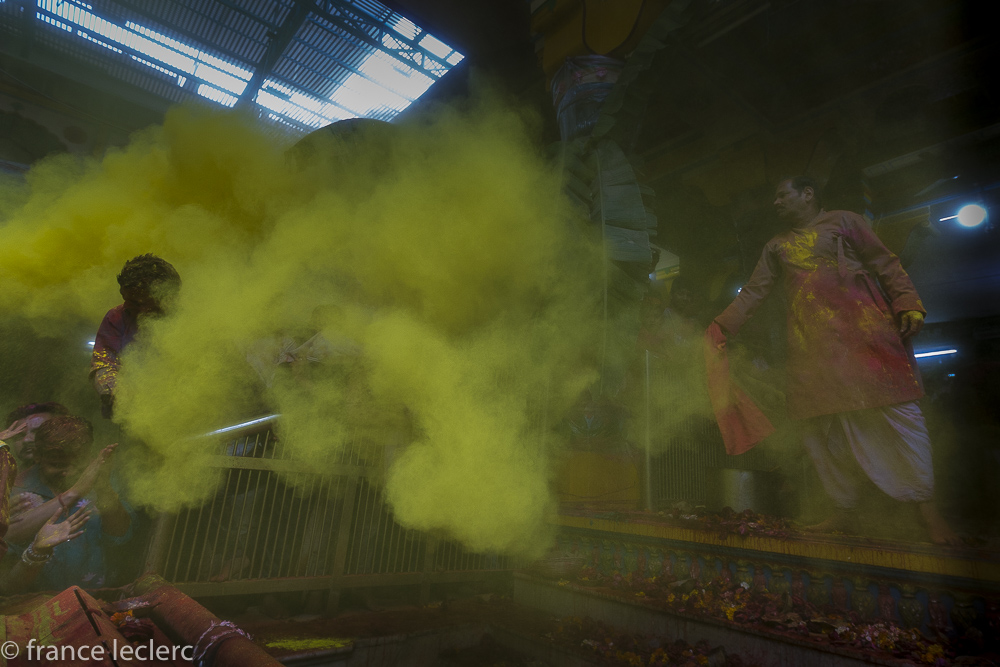 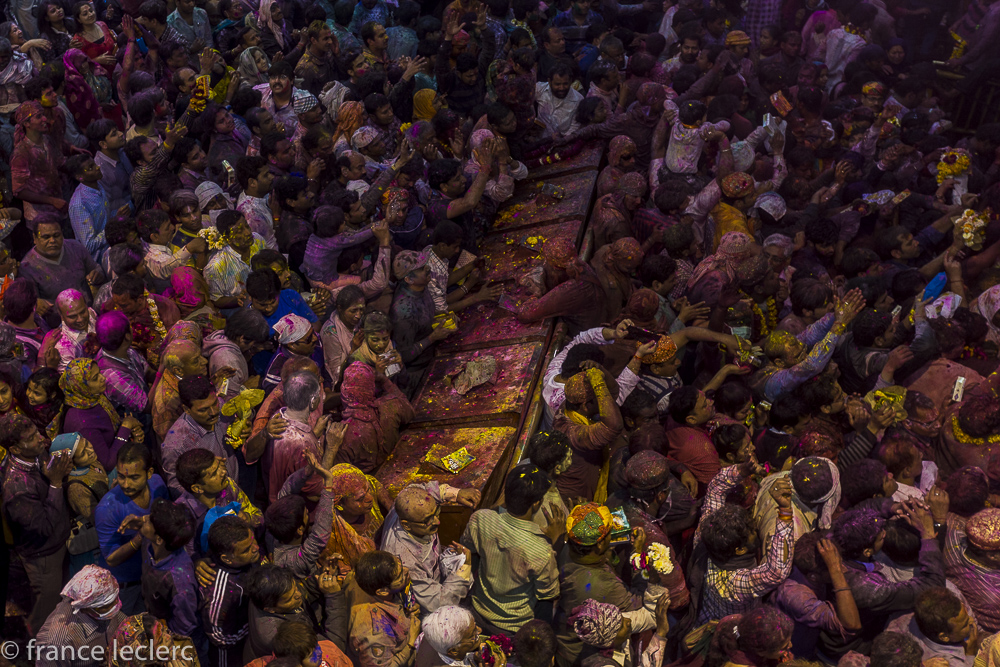 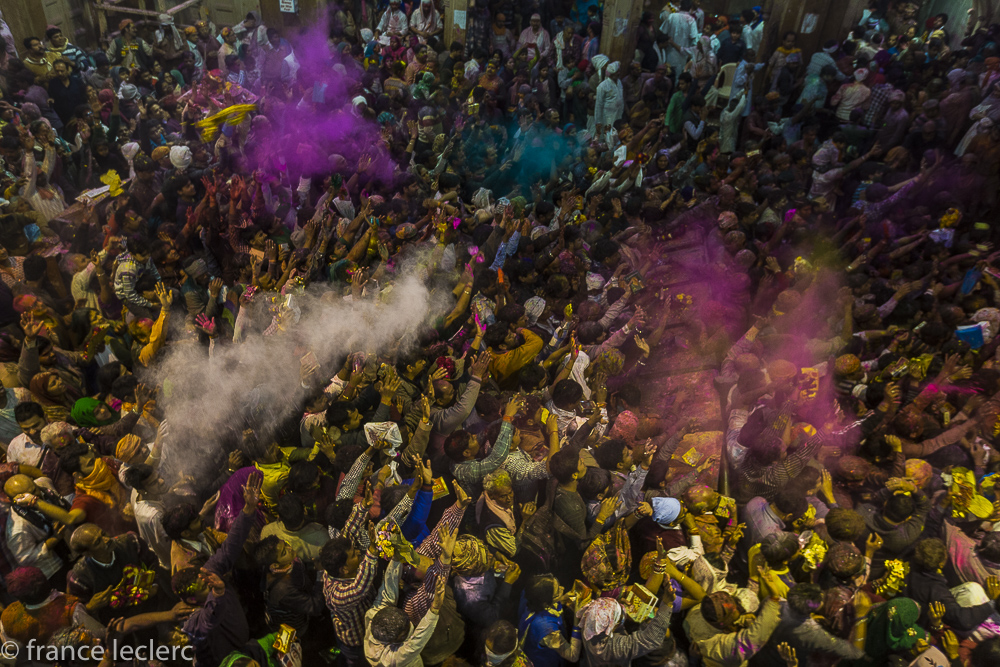 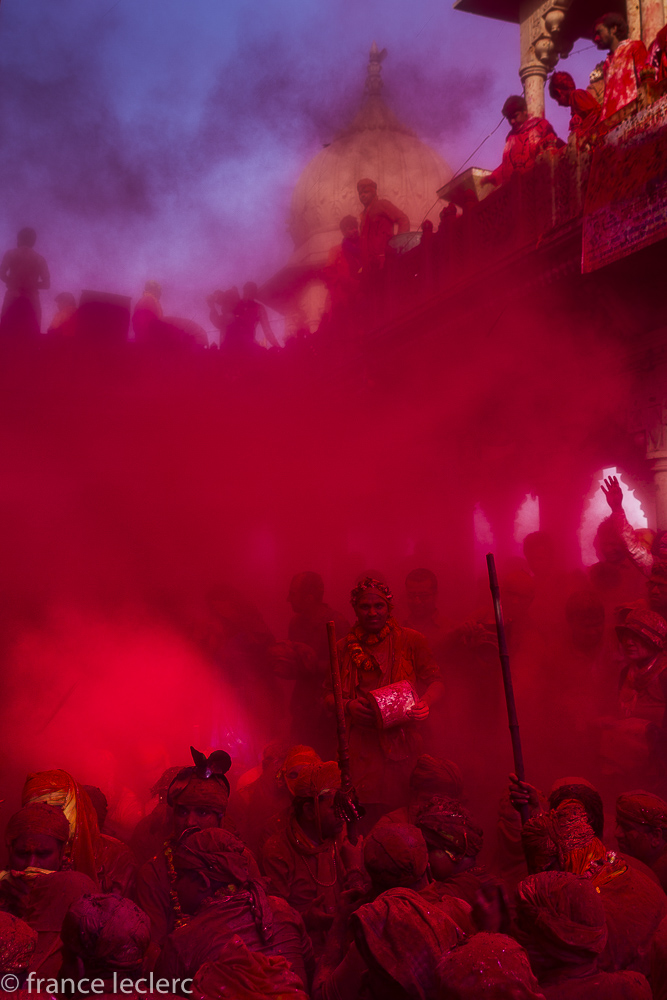 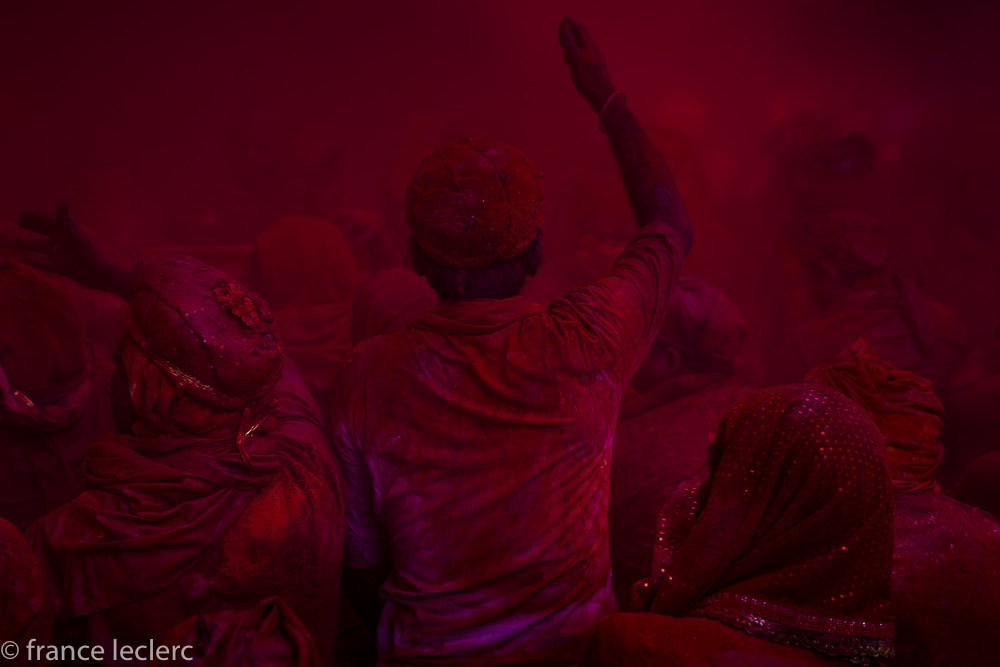