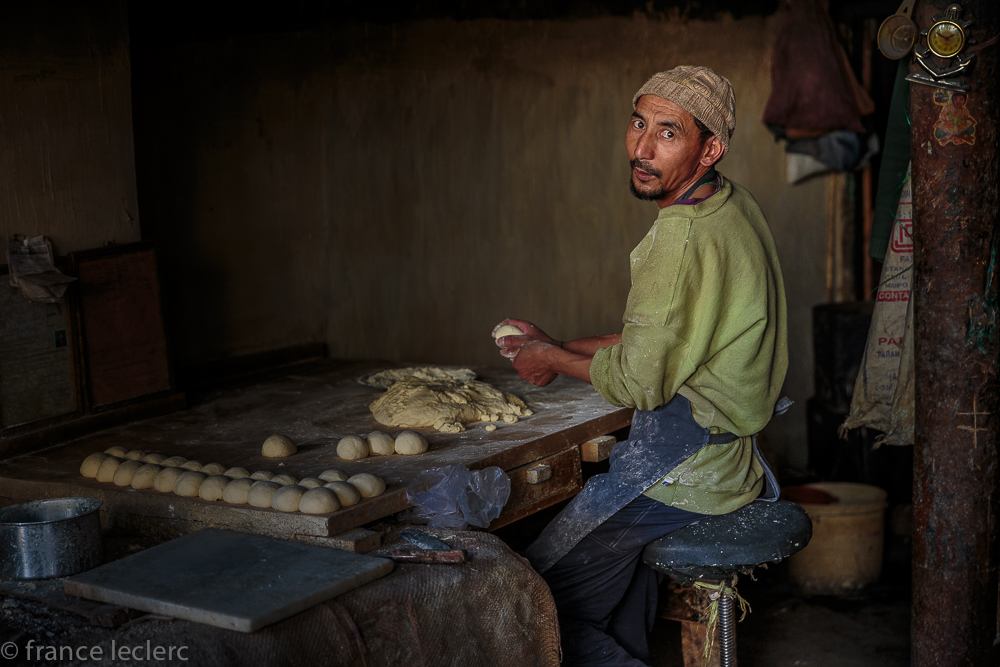 After a little interlude about Cuba, I am now back with images from Leh, the main center of the region of Ladakh where I was last September. Leh is a small town of fewer than 30,000 people. Though it was an important stop for caravans on the ancient Silk Road, now most visitors come to Leh to get acclimated to the high altitude before exploring other areas of Ladakh. (Though Leh sits at 11,500 feet, it is much lower than some of Ladakh popular trekking destinations.) Surrounded by mountains and dominated by the Leh Palace and the Tsemo Gompa, Leh offers spectacular vistas. Yet, Leh’s Old Town area is where I enjoyed photographing the most.

The Old Town, located behind the Jama Masjid Mosque, feels like a labyrinth, a set of winding alleys and intersecting lanes where one can easily get lost. There, one finds mostly local vendors, many of them Muslims. This is where I met a very friendly shopkeeper, Rehmatullah Zagar, who is a celebrity in his own way. Rehmatulla (his name means Mercy of God) is 84 years old and was born in Leh. He is always ready to chat with people passing by his shop where he sells (very skillfully) all sorts of antique objects and jewelry. As I stopped by briefly, I noticed an old photo in a frame with a cracked glass. Noting my interest, Rehmatulla volunteered that it was a photo of himself in his younger days. I asked whether I could photograph him holding his picture. He agreed though I could see his disappointment when he realized I was not actually interested in buying the picture. While I looked around a little longer, Rehmatulla proceeded to the back of his overflowing shop and came back with various magazines and books in which he was featured very prominently. Rehmatullah, with his warm smile and distinctive chin whiskers, is obviously a fixture in Leh. So if you ever are in Leh and happen to walk by his shop, you have to stop and say “Julley”(the main greeting in Ladakh). I bet Rehmatullah will convince you to buy a small souvenir from him. And you will (as I did) because you will want to remember your encounter. 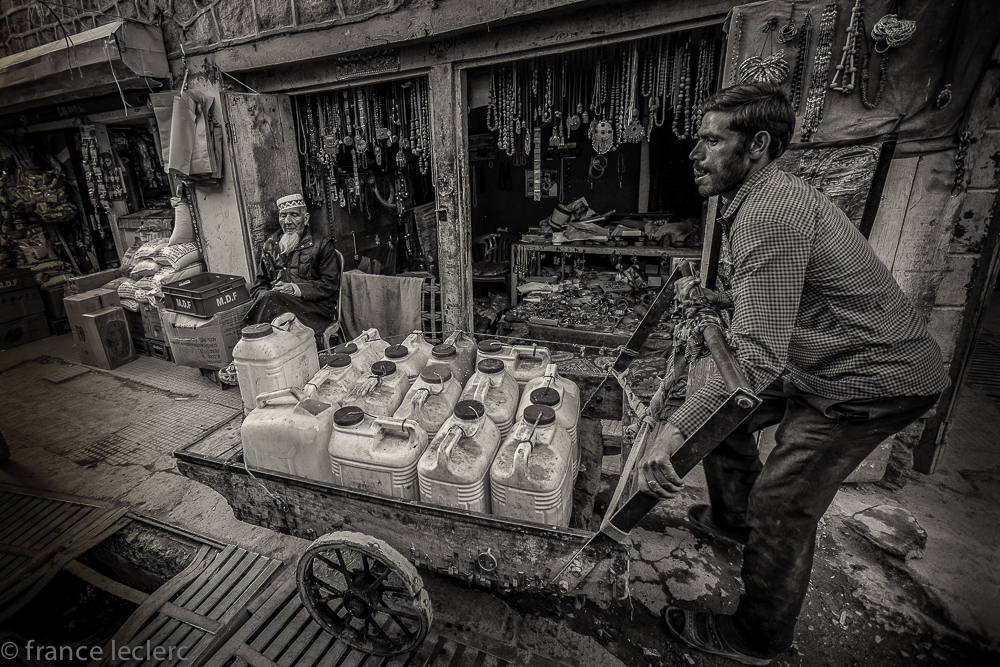 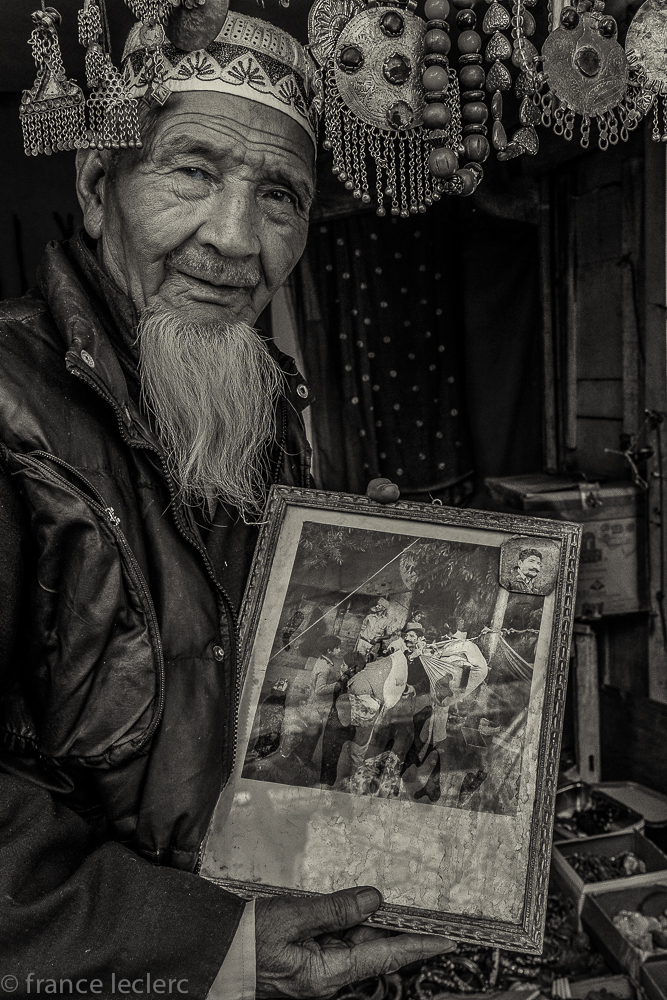 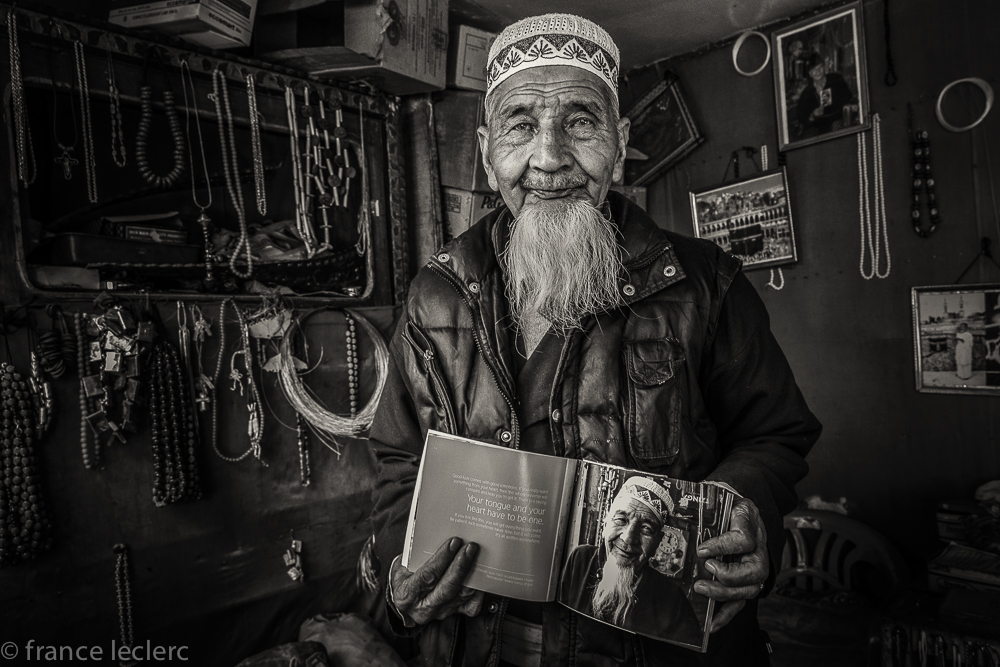 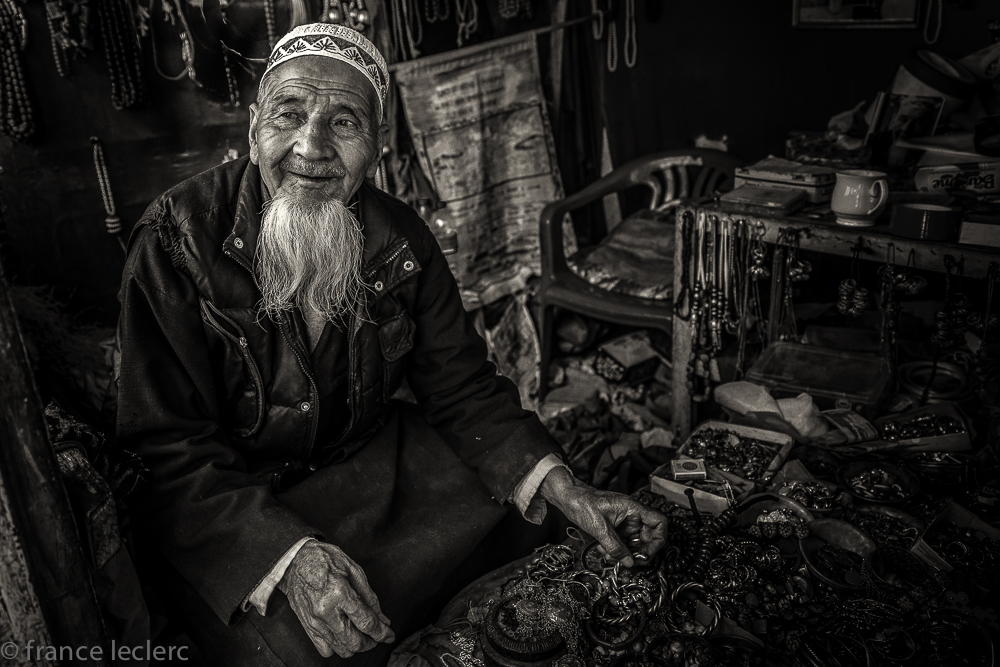 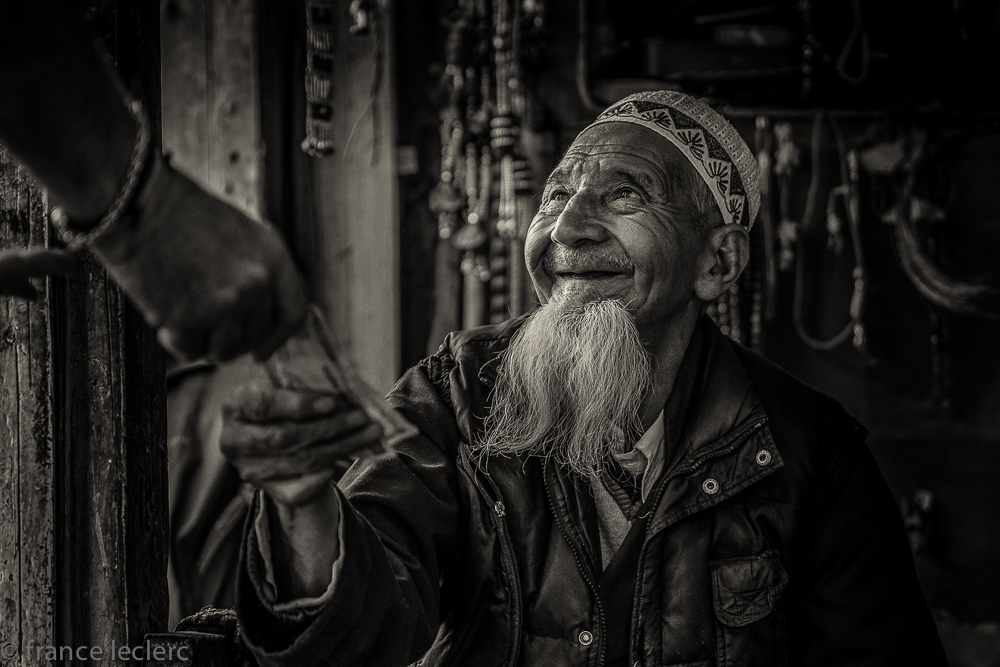 Rehmatullah’s shop is near one of the alleys where I spent a lot of my time. I came to refer to this alley as the “Breadmakers’ Lane” given the number of small shops making and selling bread next to one another. Here every day, a dozen or so bakers make the most delicious bread.  Nothing can describe the experience of watching them better than this quote from one of my favorite food writers.

“[Breadbaking is] one of those almost hypnotic businesses, like a dance from some ancient ceremony. It leaves you filled with one of the world’s sweetest smells…there is no chiropractic treatment, no Yoga exercise, no hour of meditation in a music-throbbing chapel. that will leave you emptier of bad thoughts than this homely ceremony of making bread.”
M. F. K. Fisher, “The Art of Eating”

Long before dawn, the wood tandoors are fired up. Then while one baker makes the dough, another shapes it into balls and rolls it. The baker in charge of the tandoor oven places the pieces of bread in neat rows on the walls of tandoor with his bare hands. When the bread is ready, using long iron rods, the baker removes the bread from the tandoor and sells it right away still warm. Mr. Amir is the young man pictured in the last of my images. He is 20 years old and has been making bread since he turned 16. He and his fellow baker Mr. Manzook make 1000 pieces of bread every day, mostly kulcha and choat, that they sell for less than ten cents apiece. I can attest that both types of bread are delicious. I could not resist them. The choat is a flatbread with thick edges and crumpled surfaces and the Kashmiri-style kulchas are around, slightly salty biscuit-like snack, that the locals like to consume with what they call “salted tea”. (The only thing I will say about salted tea is that it is an acquired taste.) Since everyone in town buys their bread at one of the bakeries, the shops are ideal meeting points where people enjoy a little chat before going their way with their very fresh and delicious purchases. 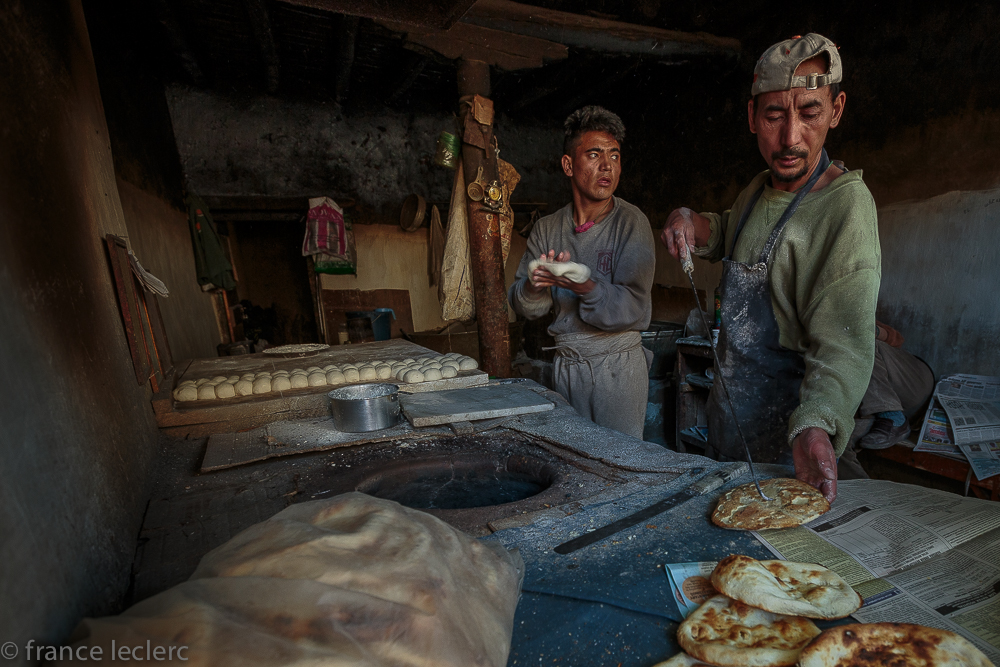 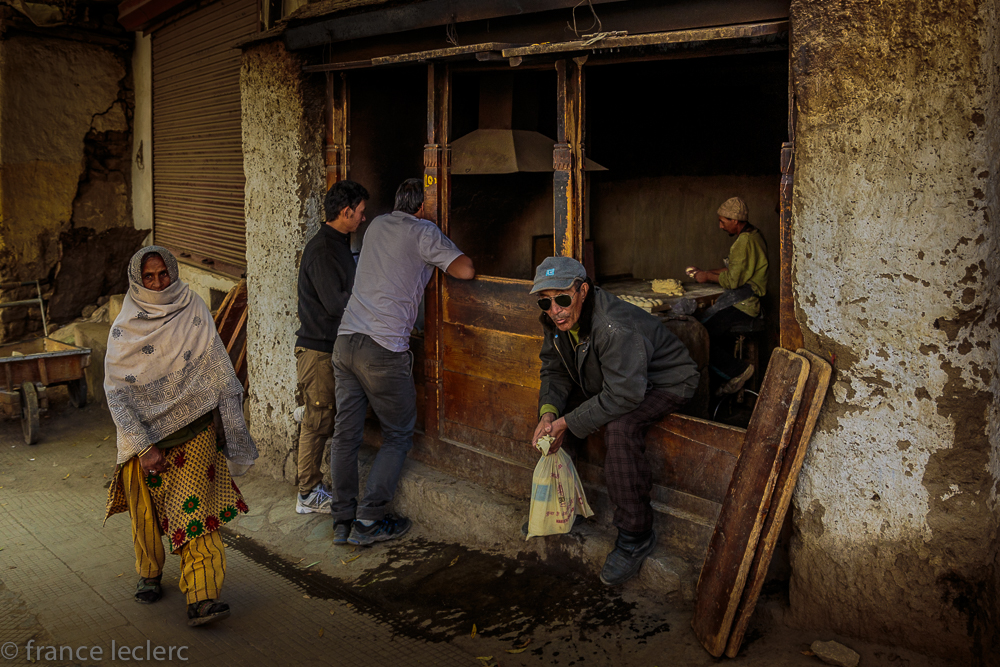 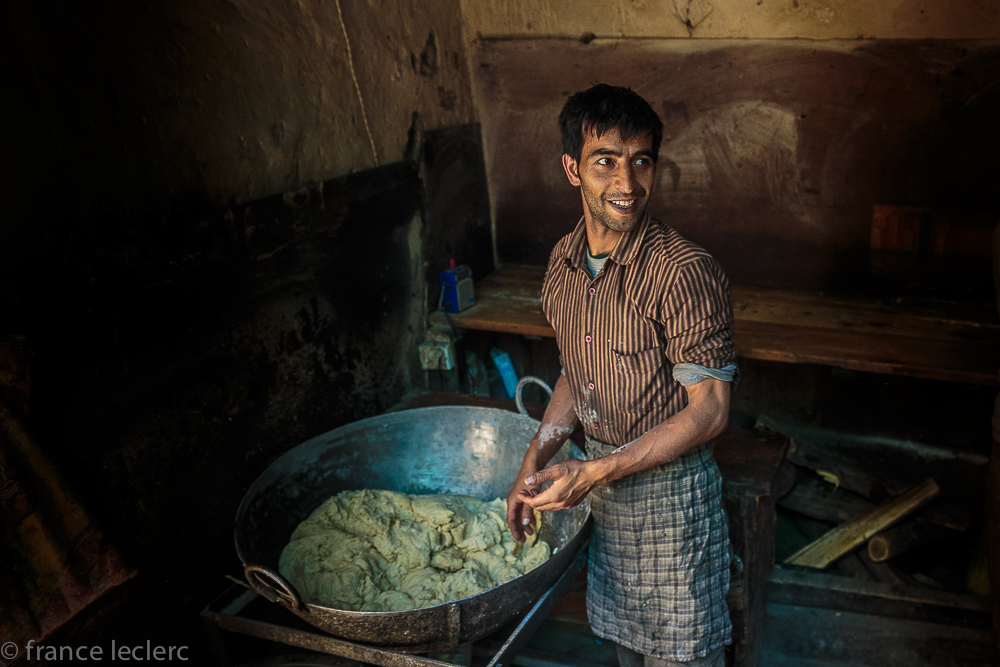 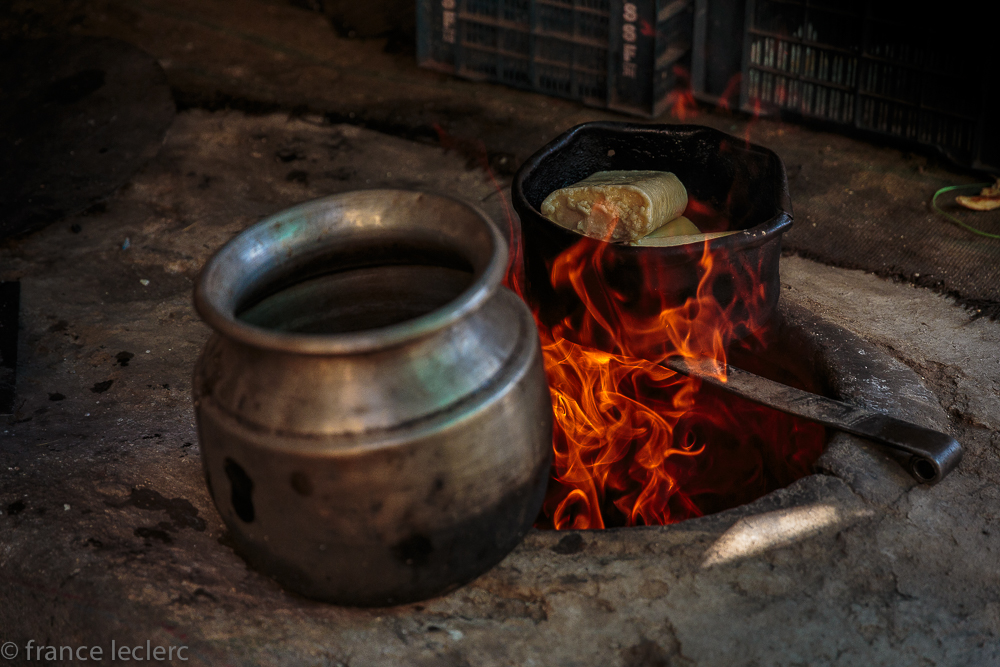 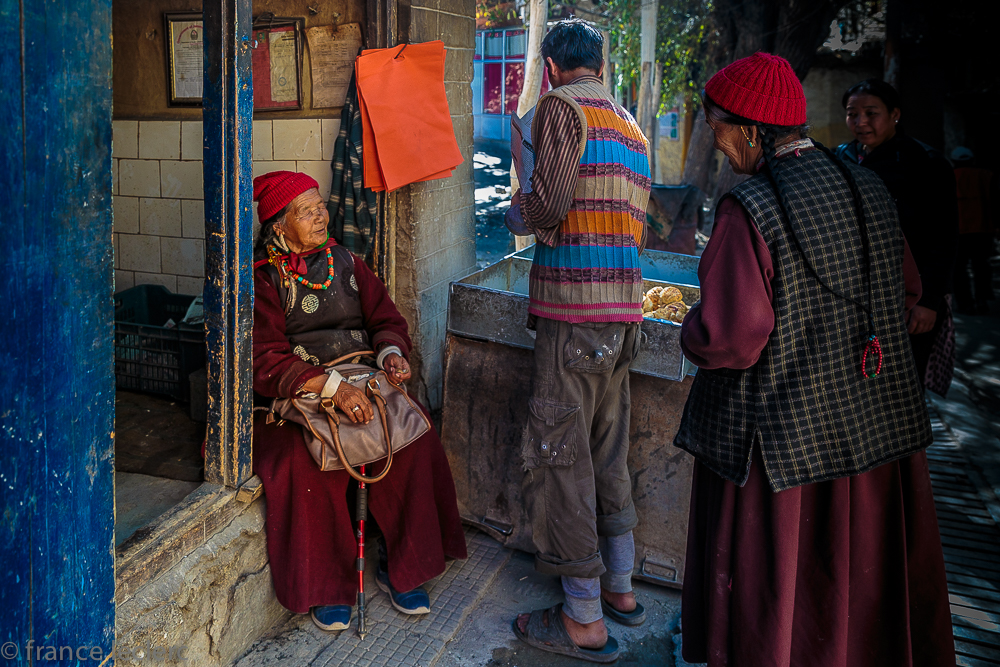 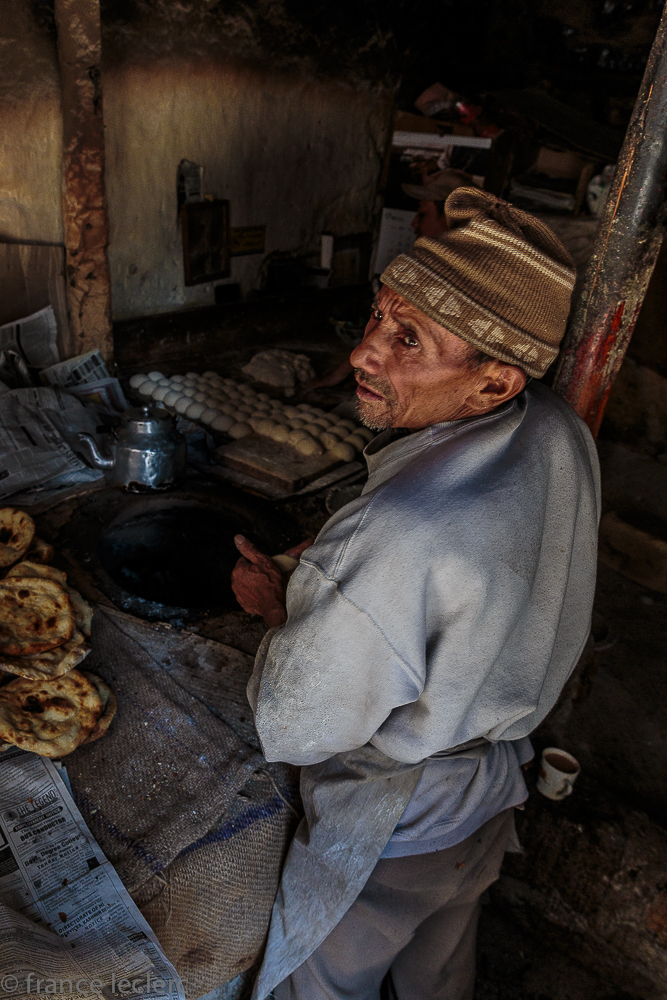 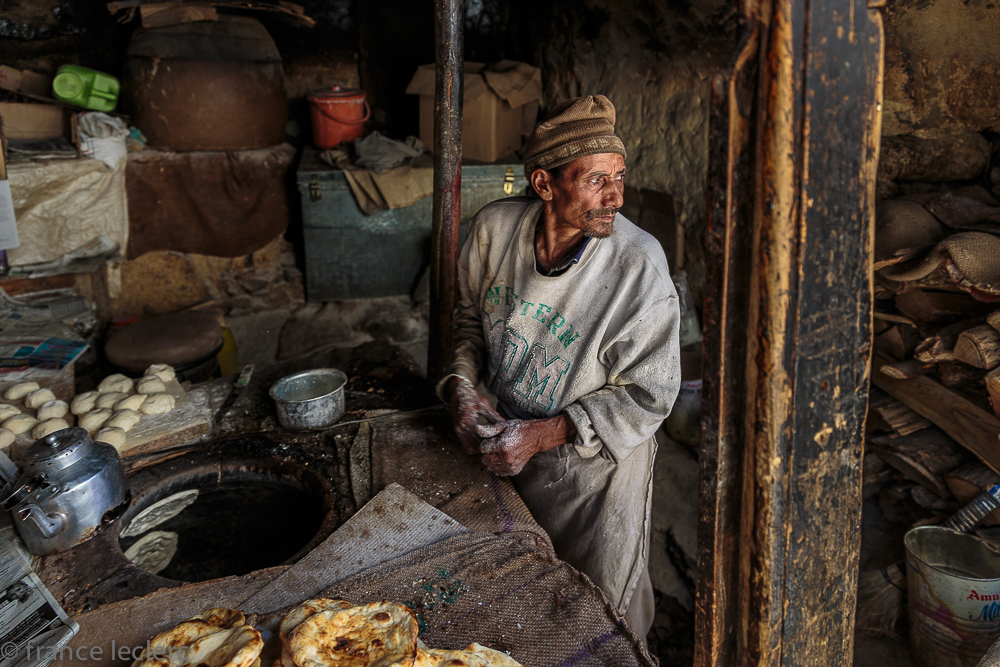 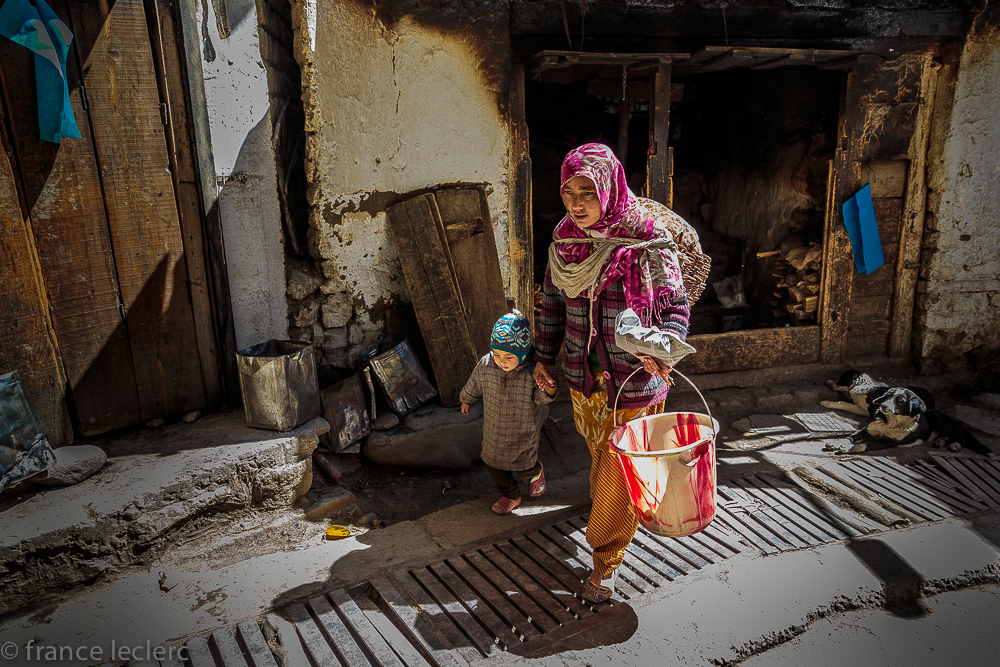 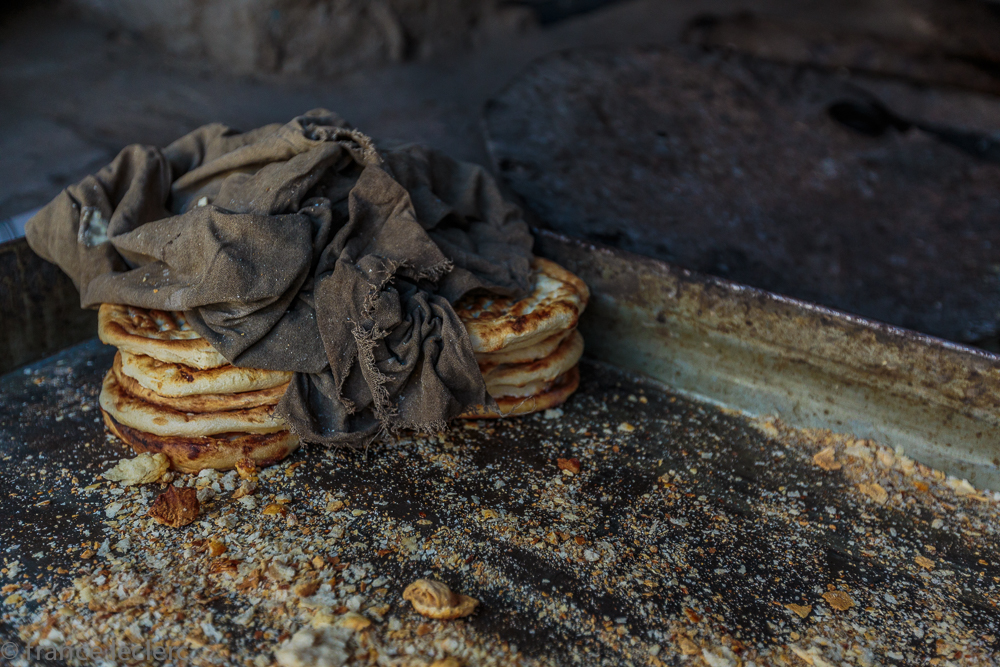 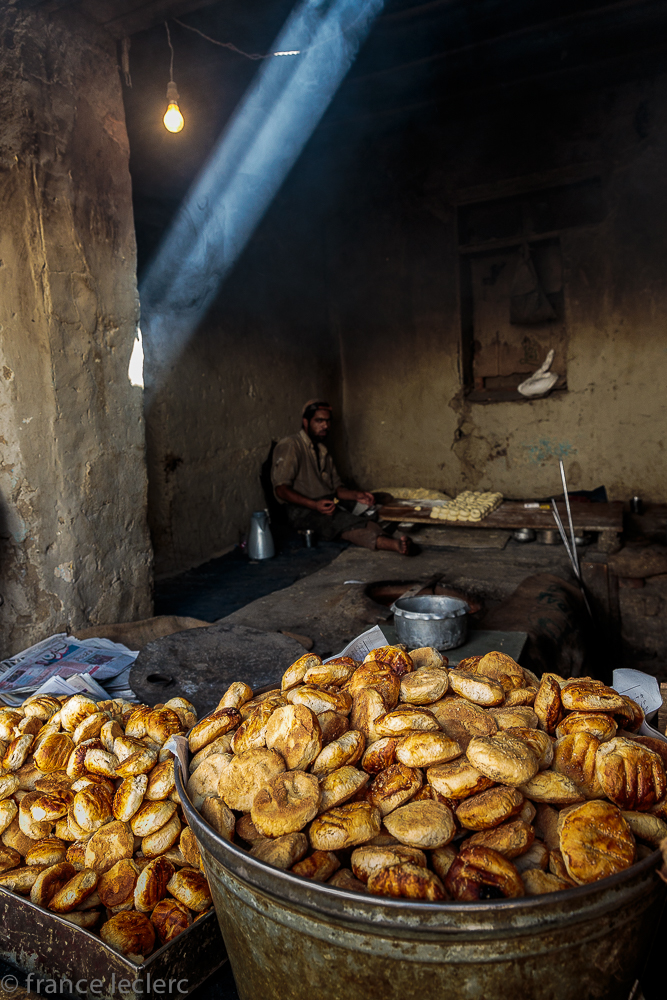 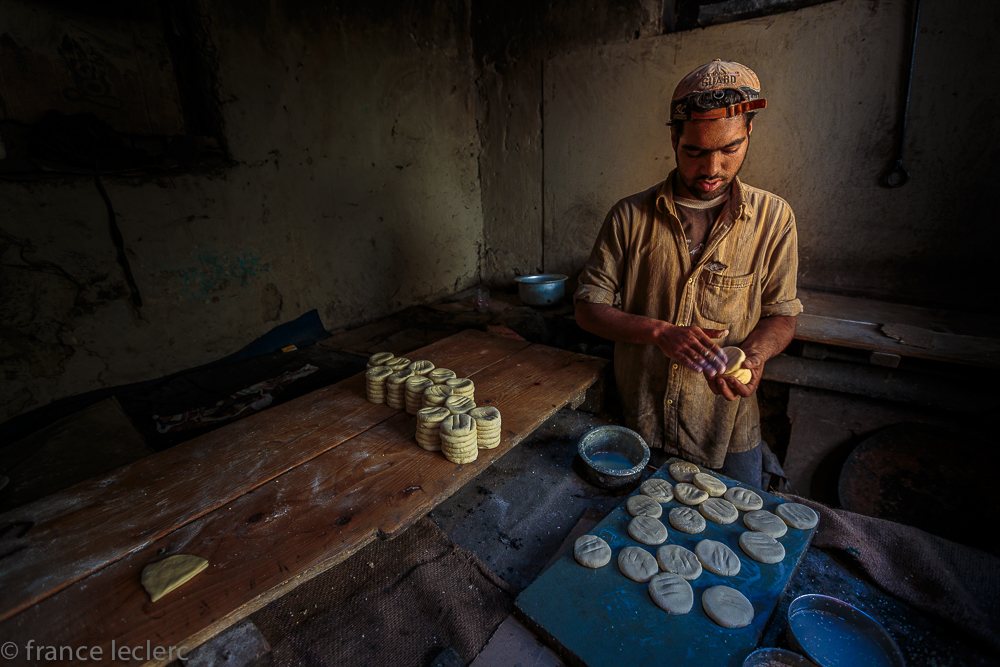 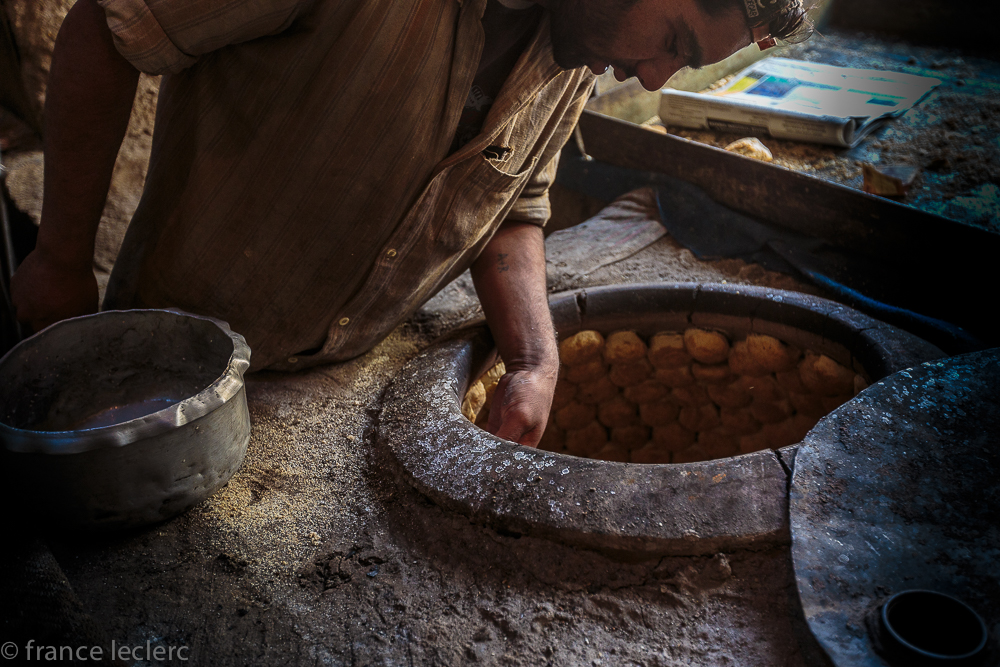 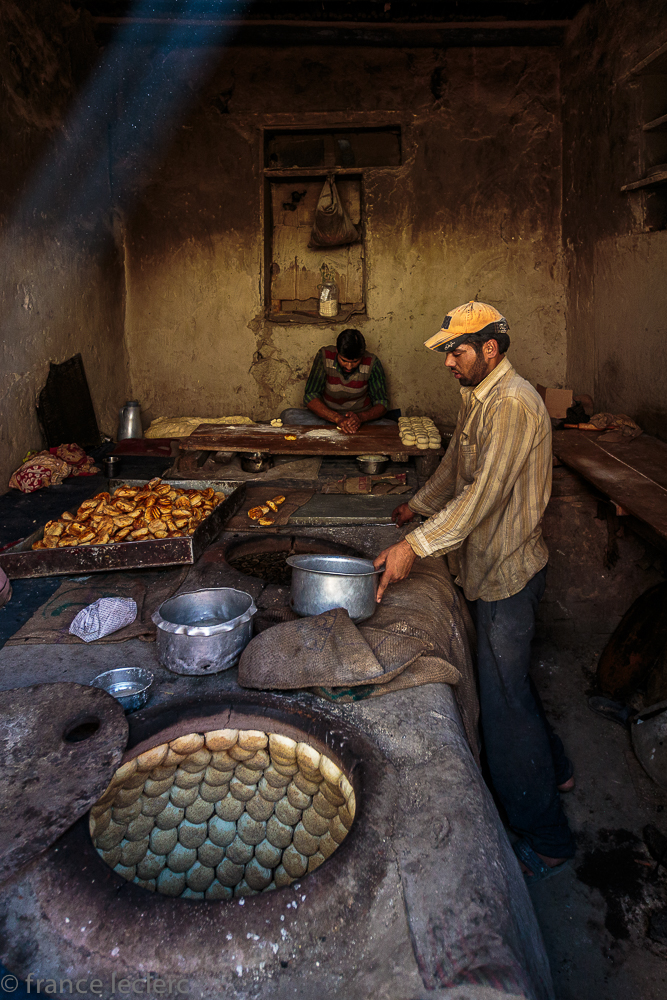 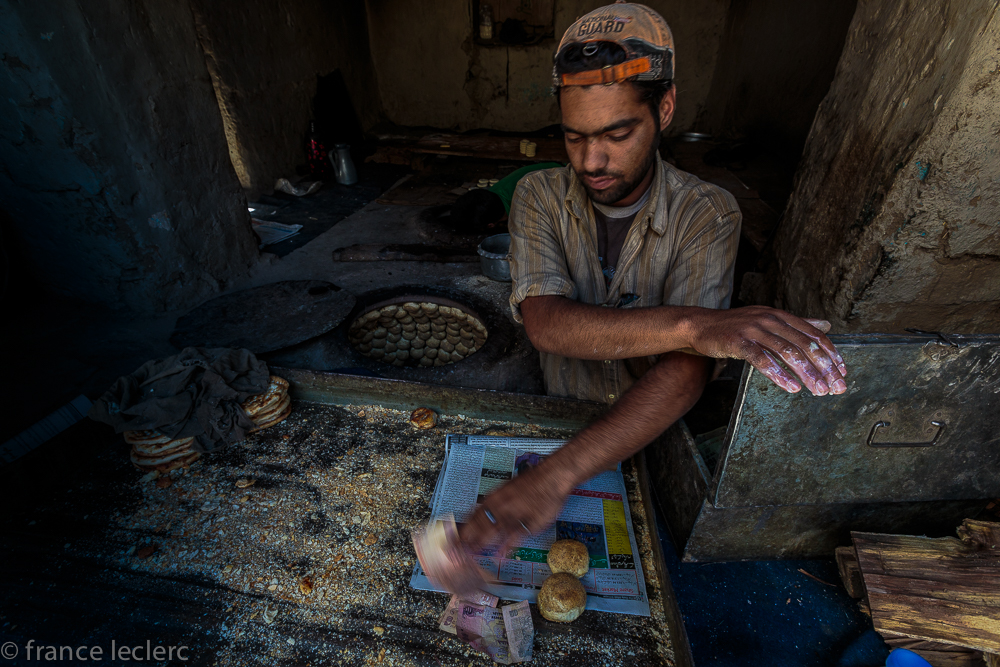 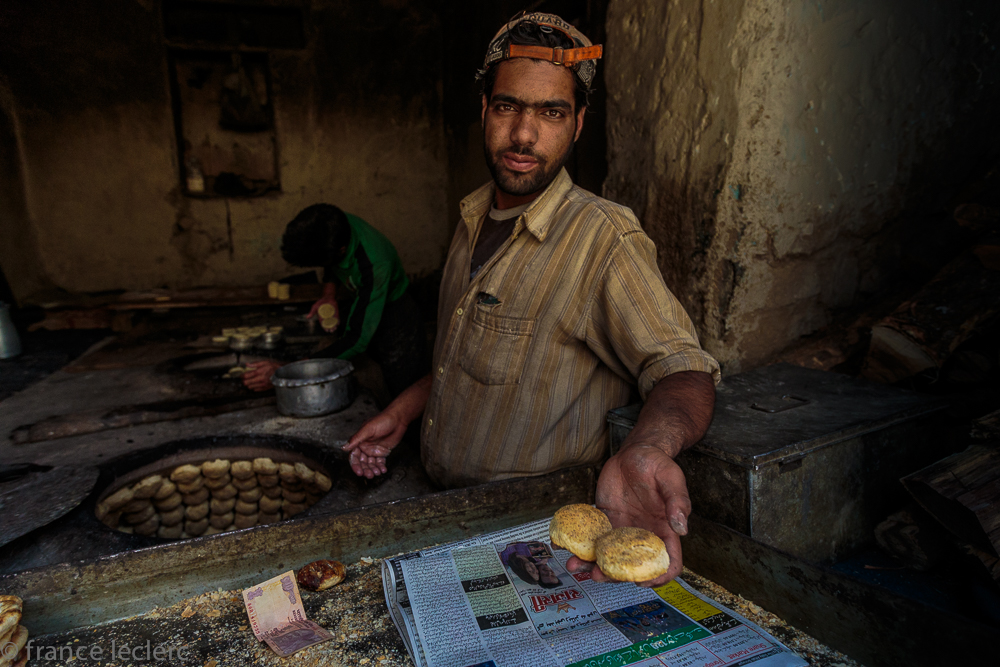