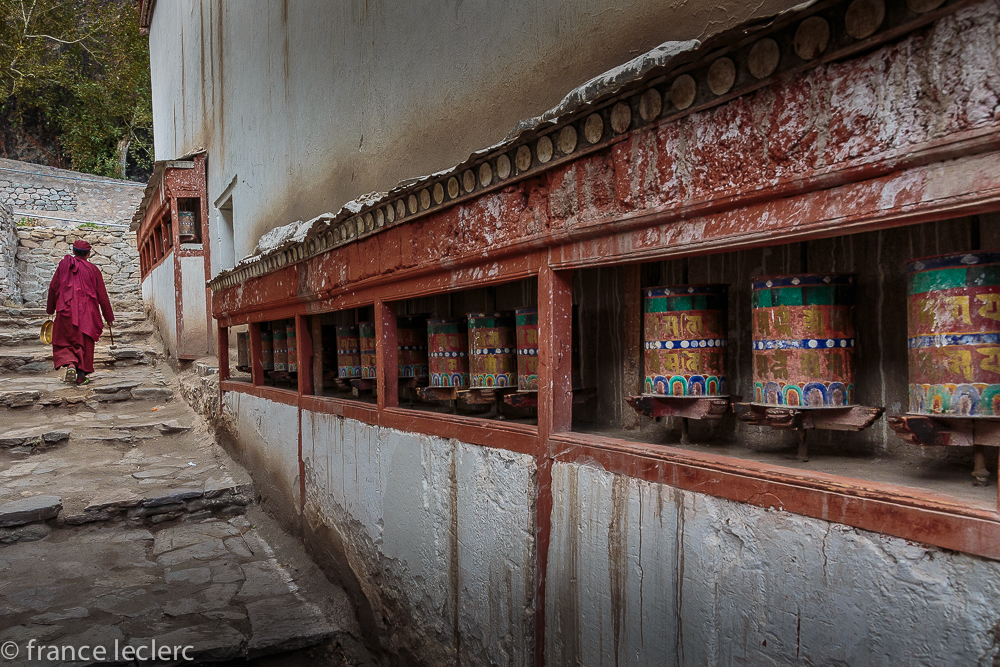 I must be in my “monk” period. A couple of weeks ago I posted images of Cambodian monks in their striking saffron robes. This time, in my first post about a recent trip to Ladakh I will mostly feature Ladakhi monks in their subdued brick-red color robes, whereas future posts will focus on other aspects of life in this region that has been called “beautiful in a harsh way”.

One of the three official regions in the “disputed” state of Jammu and Kashmir at the northern tip of India, Ladakh is a rugged land bounded by two majestic snow-capped mountain ranges, the Great Himalayan and the Karakoam. I had the opportunity to explore this awe-inspiring land last September, with a small group of adventurous photographers (and an adventure it was) led by Matt Brandon, a.k.a. the Digital Trekker, his lovely wife Alou, and his acolyte, Lightroom guru Piet Van Eynde.

Ladakh is certainly not a typical “India” experience (if there is such a thing). There is not a sari in sight, except for those worn by Indian tourists; Ladakh is very sparsely populated, its climate is moderate to cold (and artic cold at night– more on that on my next post); and it has breathtaking landscapes that often offer a deep-blue sky in the background. Its name aptly means “land of passes”, as it is endowed with not only a large number of mountain passes but also very high ones (signs at the highest pass we crossed reported it to be over 18,000 feet above sea level, and as such the highest motorable road in the world).

Though Ladakhis are an even mixture of Muslims and Buddhists, Ladakh is often referred to as Little Tibet. This is undoubtedly due to Ladakh’s proximity to Tibet and to the fact that the region has welcomed a substantial number of Tibetan refugees over the years. And most Ladakhi Buddhists follow the Vajrayana sect of Mahayana Buddhism, the same one Tibetans follow. Not surprisingly, there are numerous Buddhist monasteries proudly sitting on jagged cliffs, (at least in the eastern and central part of the region) which strongly evoke Tibet as well.

So we visited a number of spectacular monasteries, locally called gompas, where monks live and practice Buddhism. The Tsemo Gompa sits right above Leh, the main town in Ladakh, and our base for much of the trip. Not very far from Leh is the Thiksey Gompa where monks blow horns in the morning to announce to the village that it is time for blessings. On our way to the charming village of Lamayuru, we admired the Stakna Gompa perched on the hill, and paid a visit to the very impressive Hemis Gompa. The Lamayuru Gompa is still a very important monastery in Ladakh, home for over 100 monks. Early mornings there were spent with the novice monks (who my husband playfully calls the “mini” monks) during their morning devotions. If you wish to hear their (not very) harmonious voices, click on the link below the images. 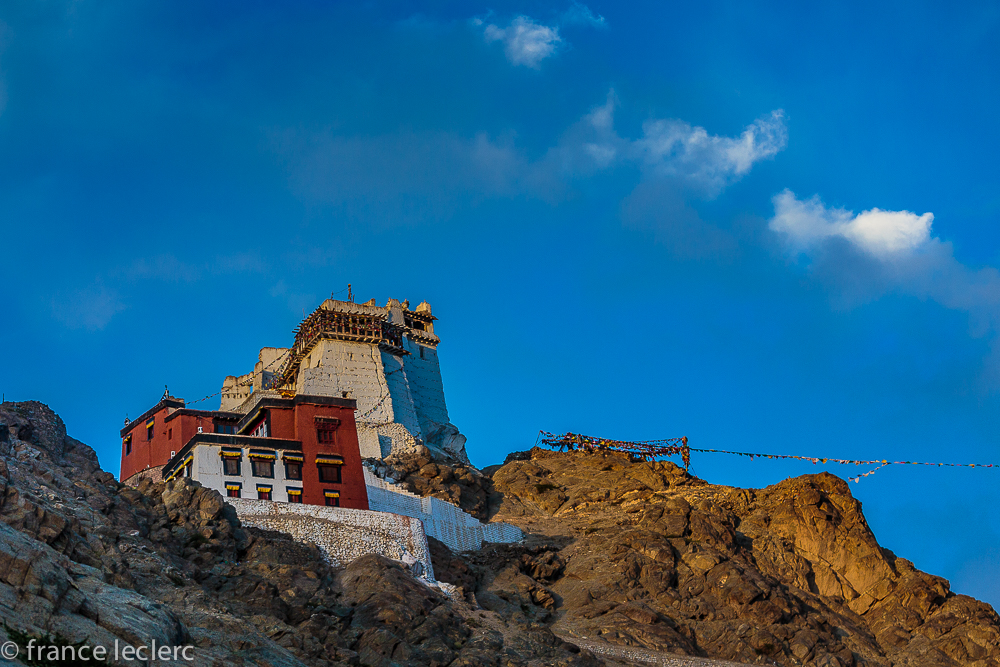 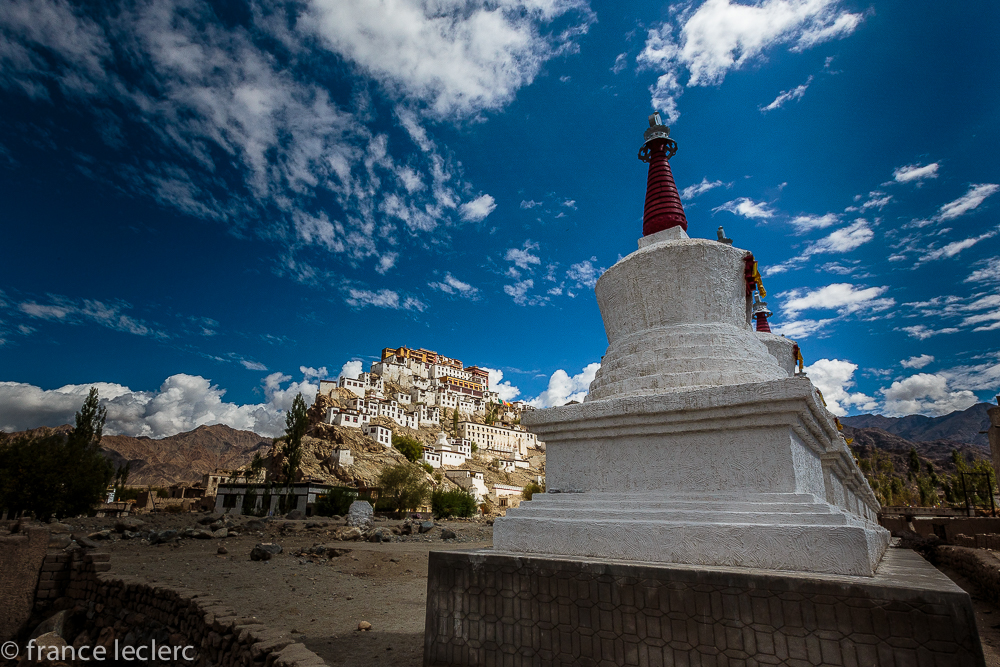 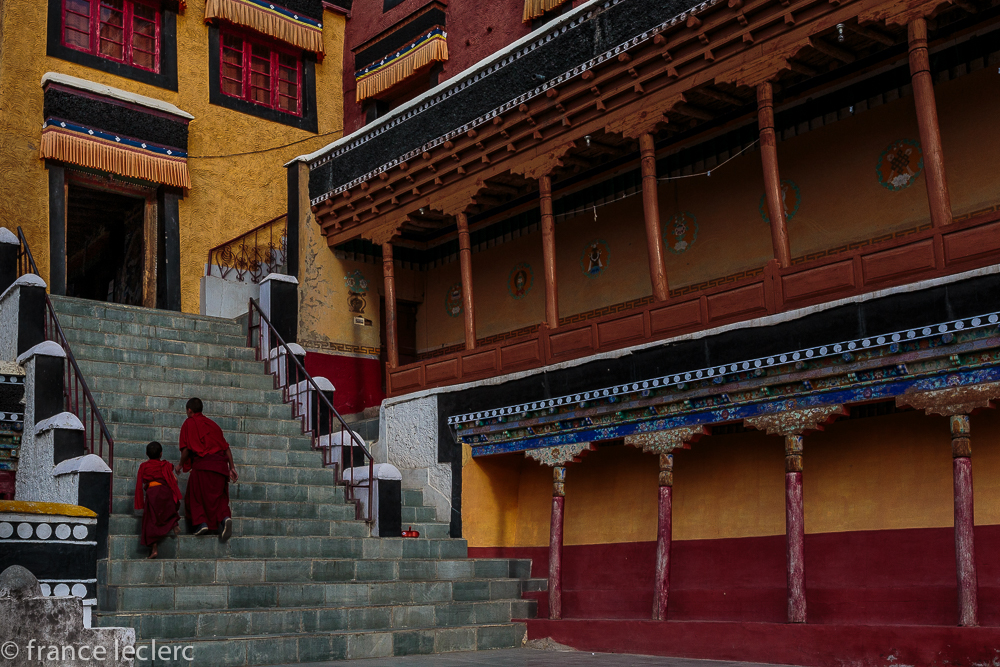 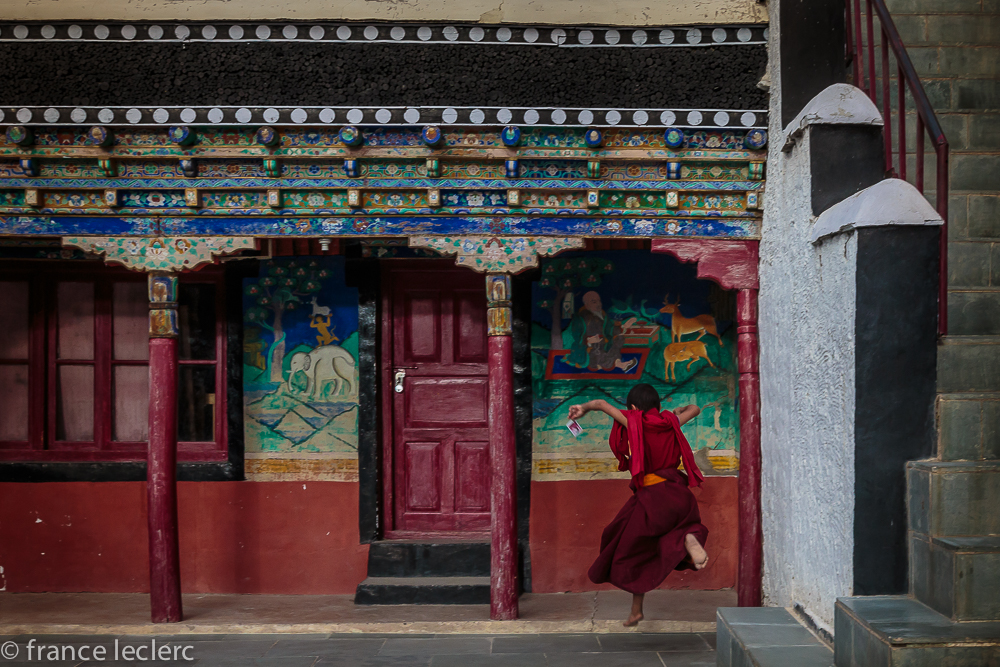 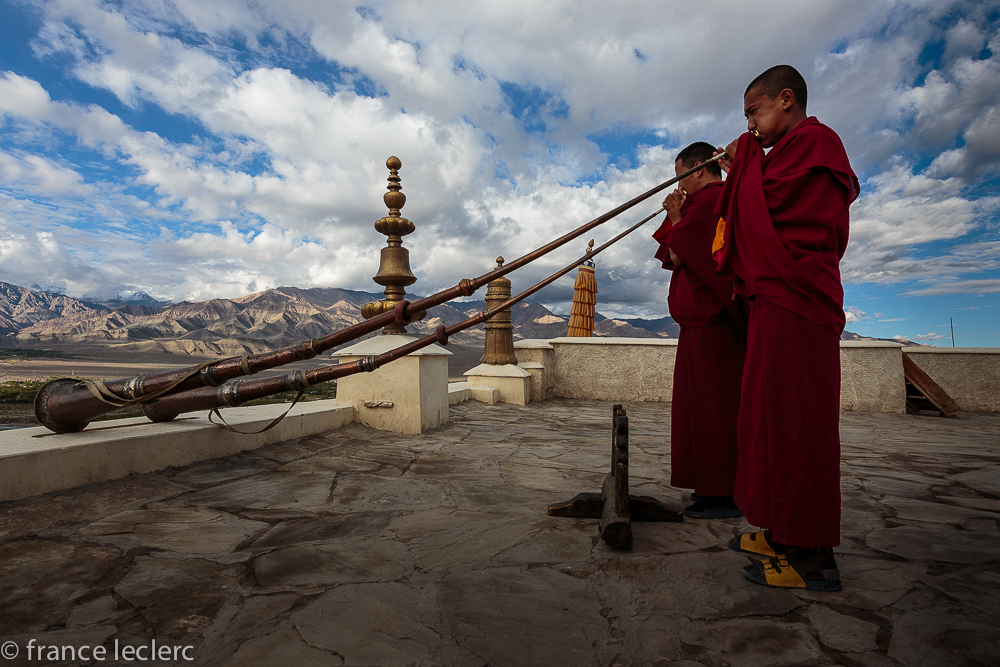 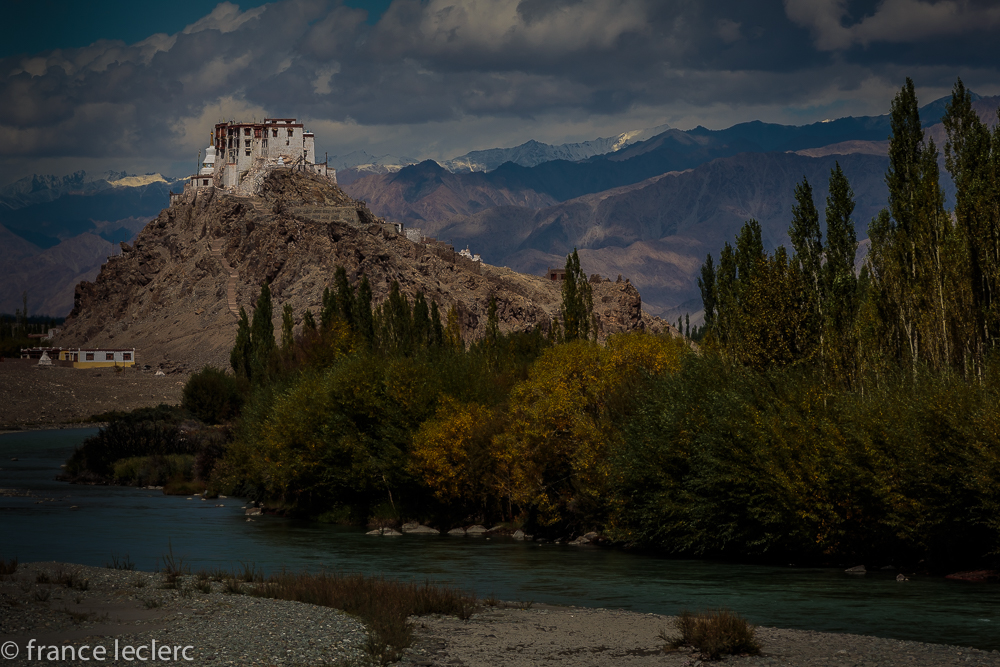 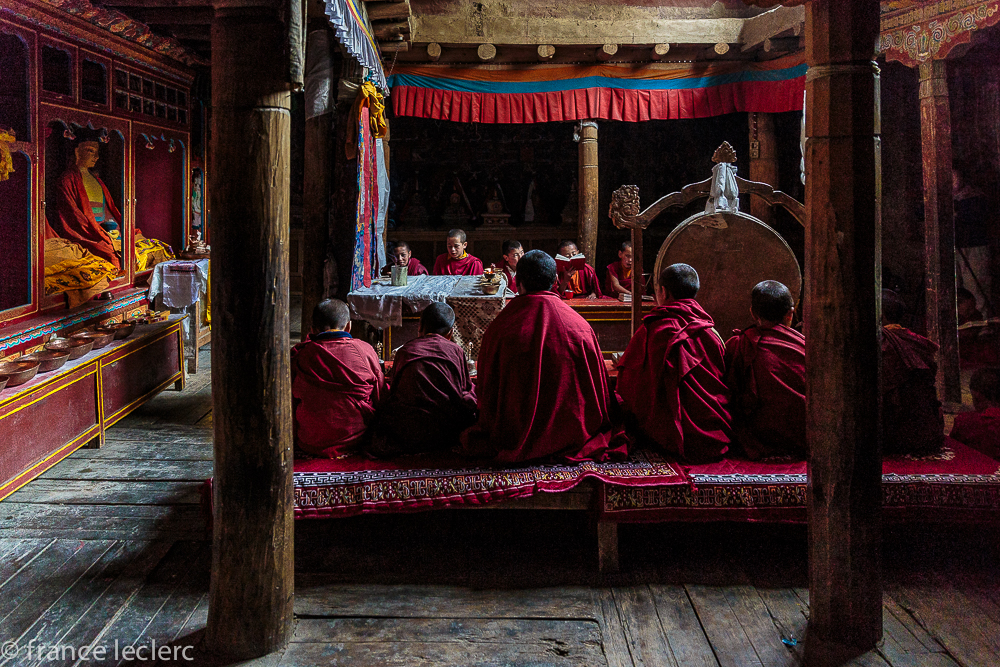 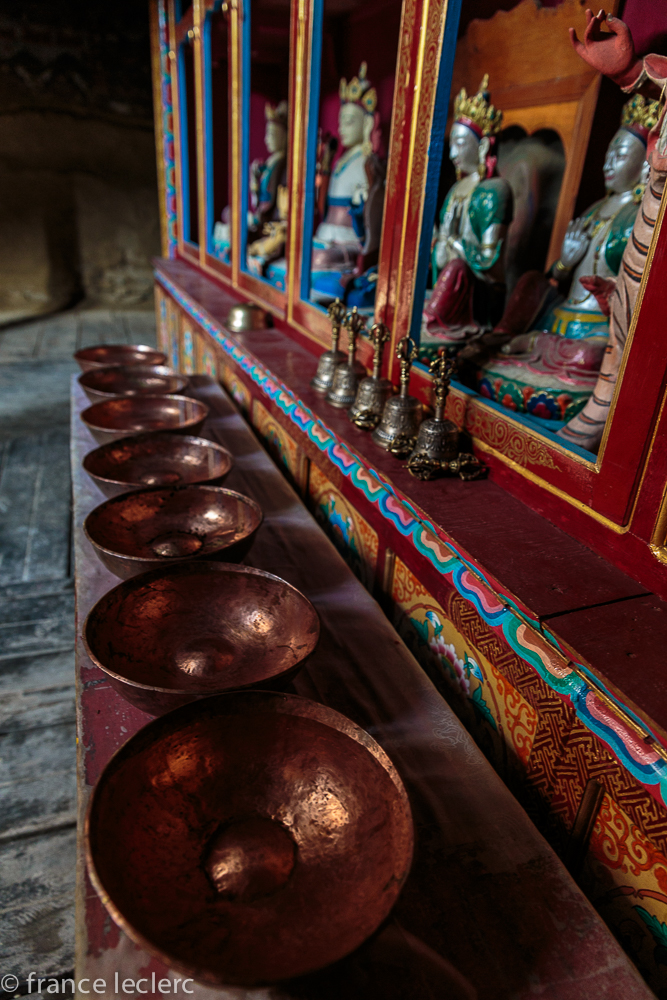 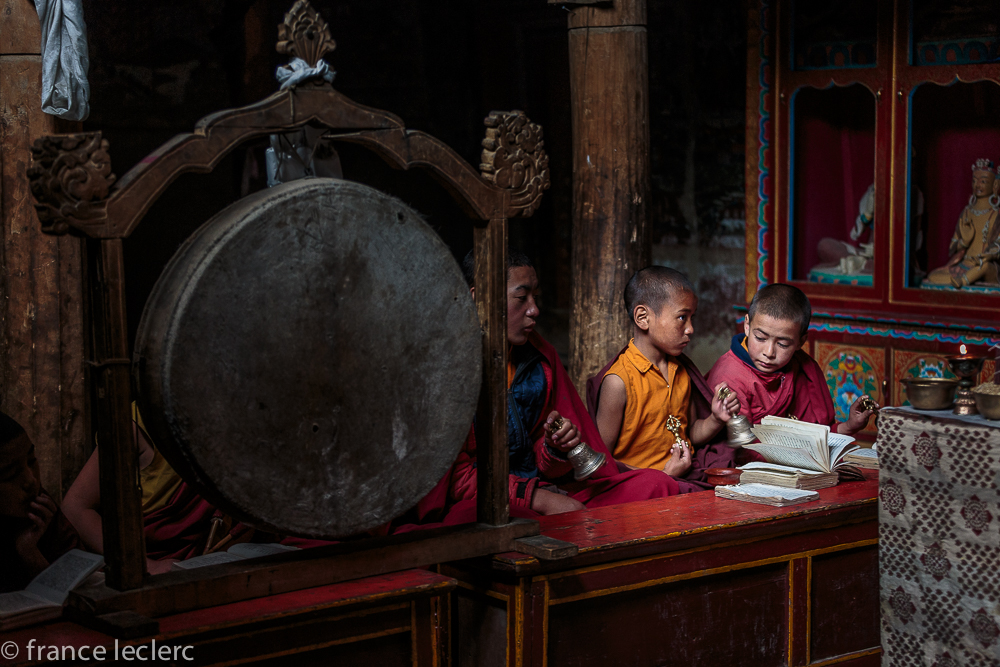 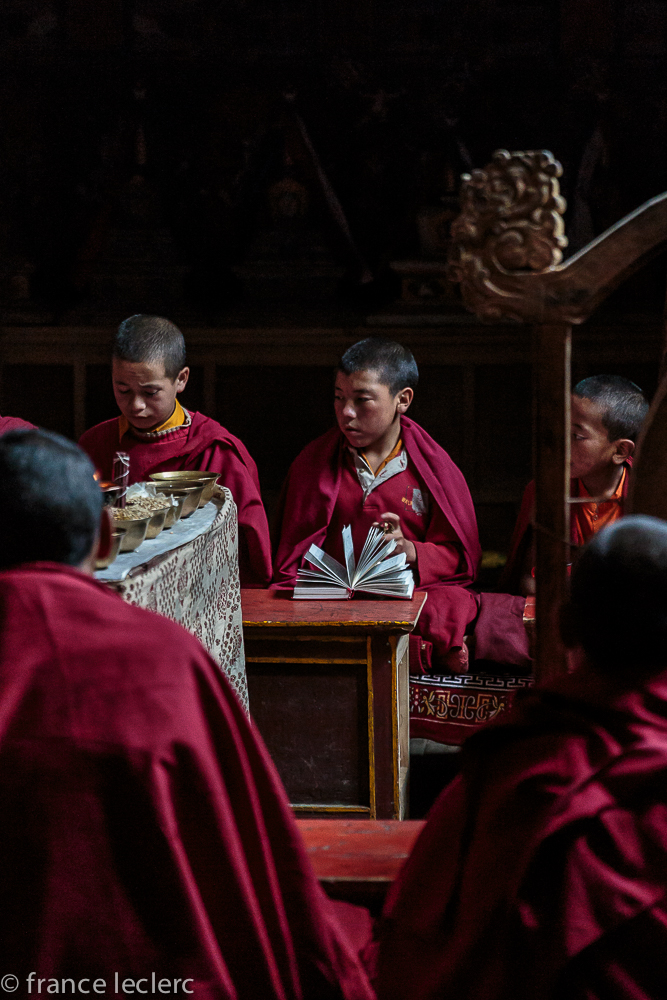 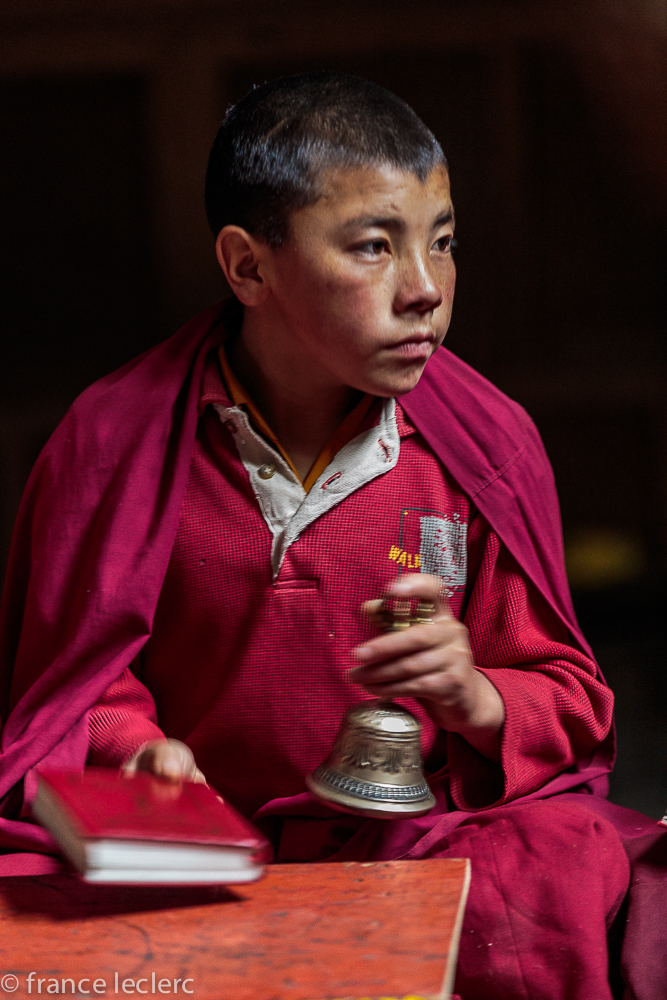 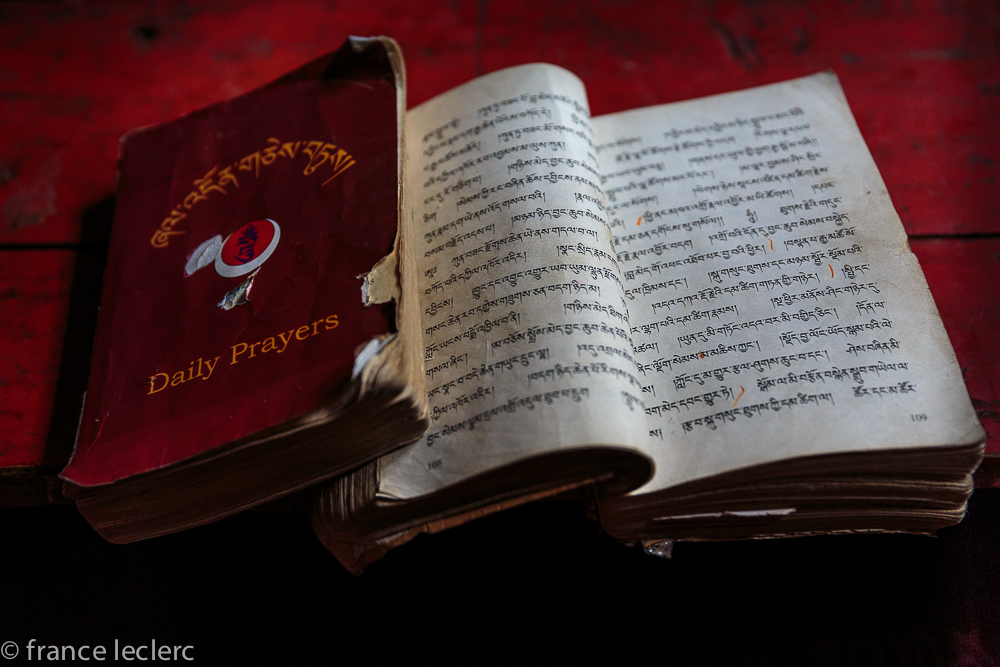 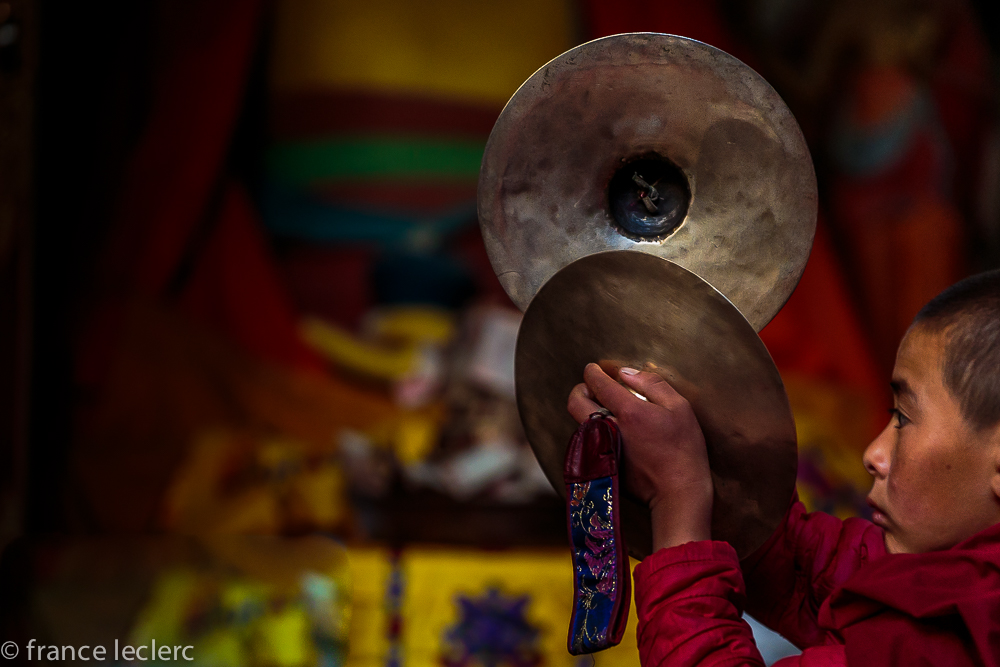 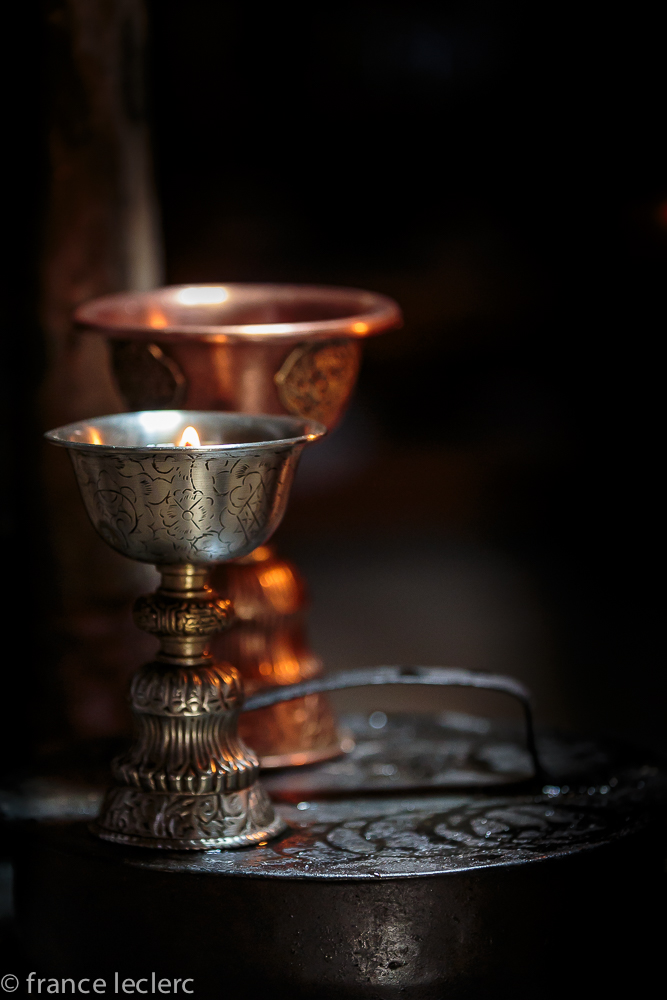 The Buddhists in Ladakh practice the same rituals as their counterparts in Tibet and Bhutan. Colorful prayer flags are fluttering in the mountain breeze everywhere.  These flags, typically squares or rectangles of five different colors (blue, white, red, green, and yellow) are covered with symbolic images and mantras (sacred utterances). The purpose of the flags is not to carry prayers to gods, but rather to spread the goodwill and compassion into all-pervading space. By hanging flags in high places, it is hoped that the air will be sanctified by the mantras and the wind will carry the blessings depicted on the flags to all beings.

To release more karma-making mantras, Ladakhi Buddhists spin prayer wheels. These wheels are cylinders, typically decorated with the mantra of all mantras, the famed “OM MANI PADME HUM”. Inside a prayer wheel is a long strip of rolled-up paper covered with printed mantras. Buddhists believe that every rotation of a prayer wheel equals one utterance of the mantra. So one often sees the locals spinning a prayer wheel clockwise while murmuring the mantra as they spin.

The prayer wheels are not only hand-held but can be found in a wide range of sizes and styles. Most gompas have long rows of prayer wheels that people spin as they walk clockwise around the building. And then there are family-sized ones, which one has to pull a railing at the bottom to generate a spin. I cannot imagine how many mantras are released by a turn of these giant wheels. One would hope enough to create world peace, at least eventually. 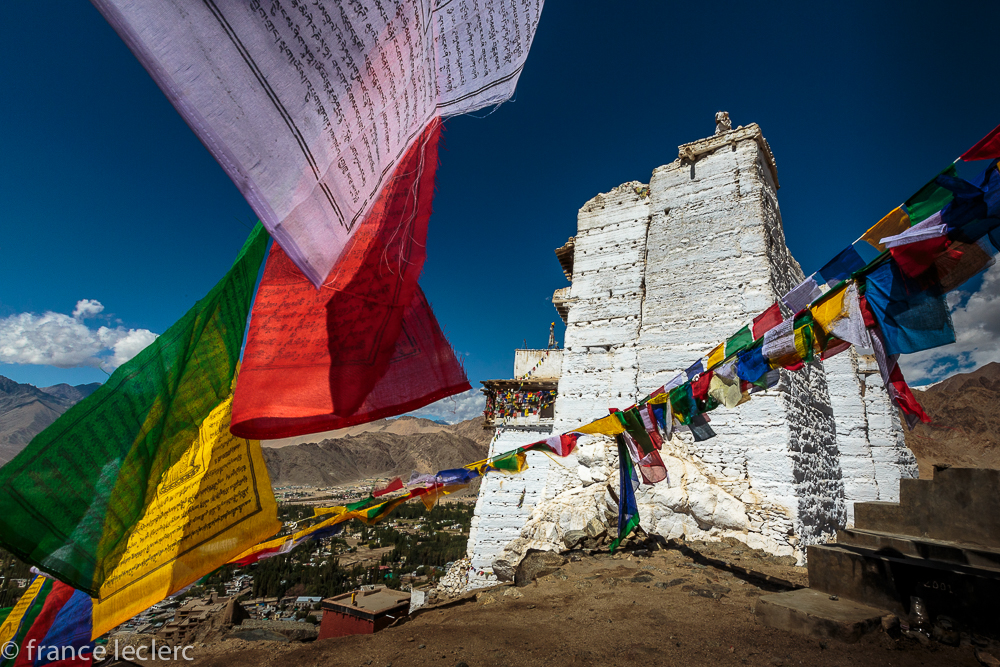 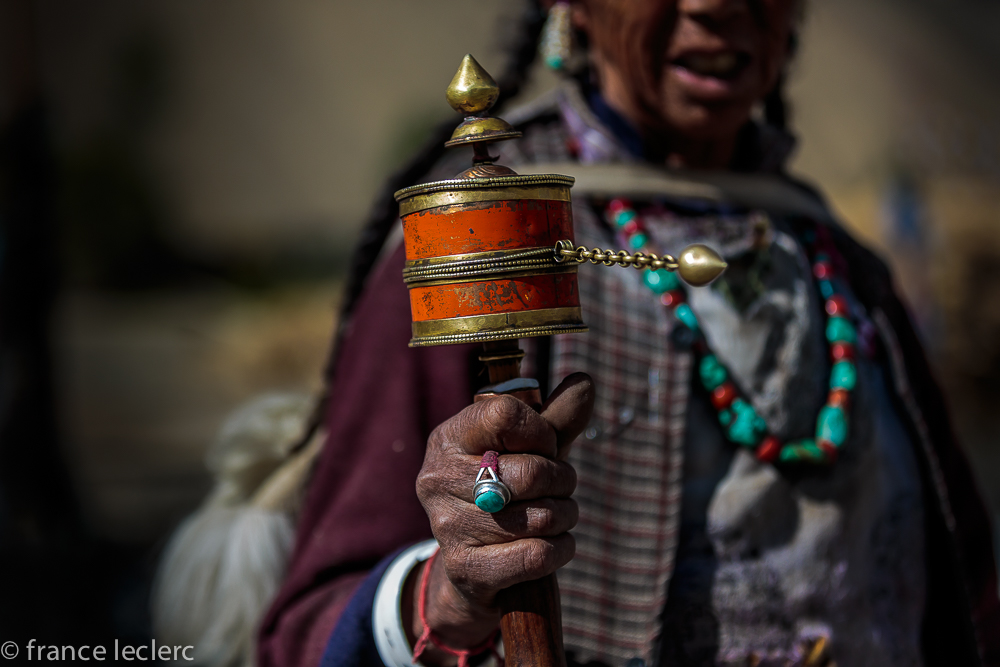 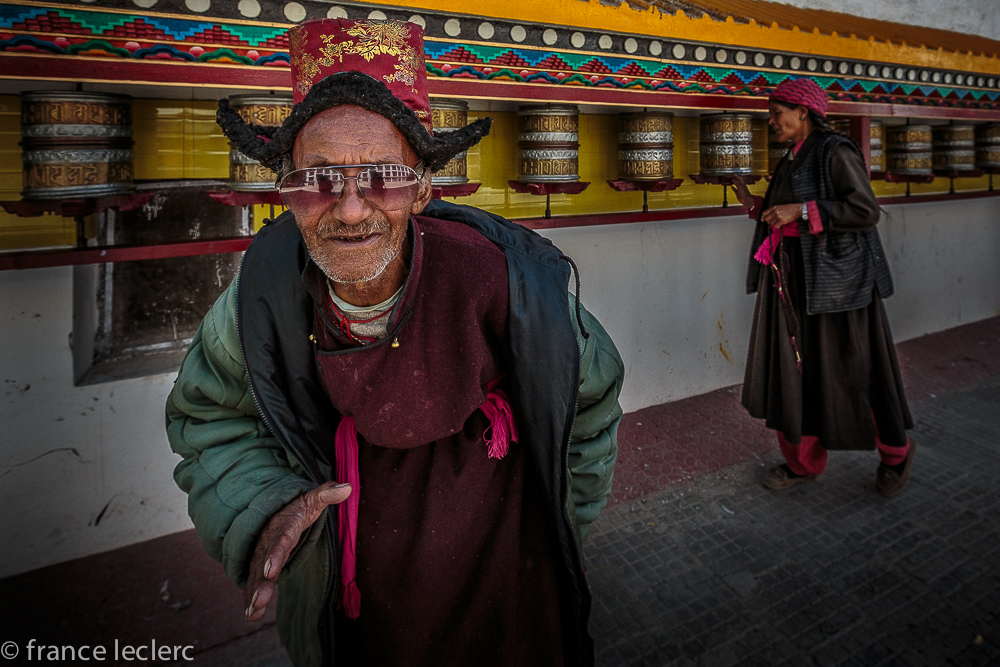 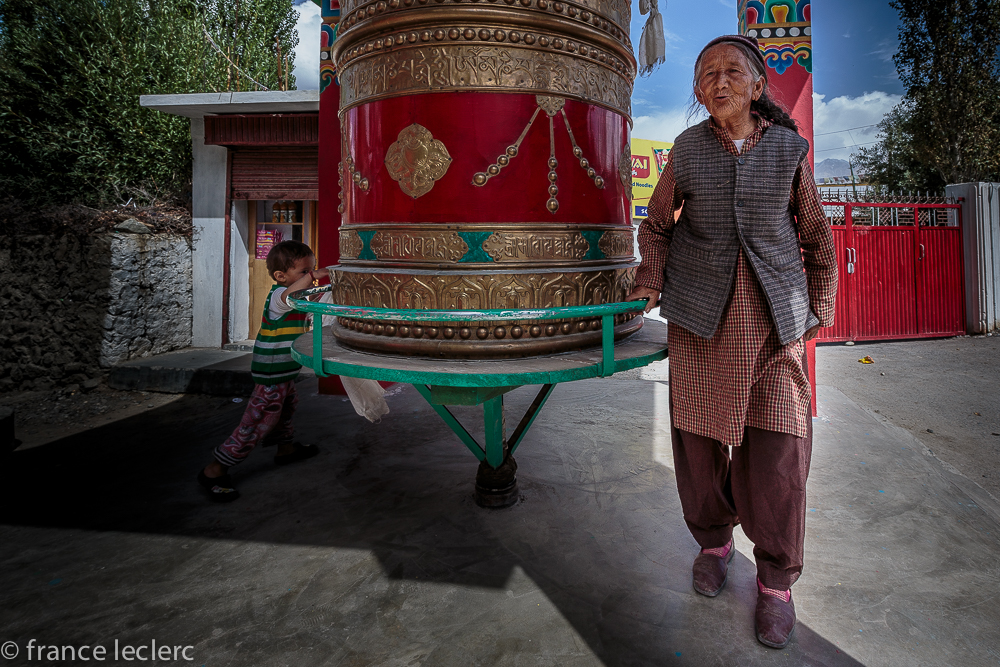 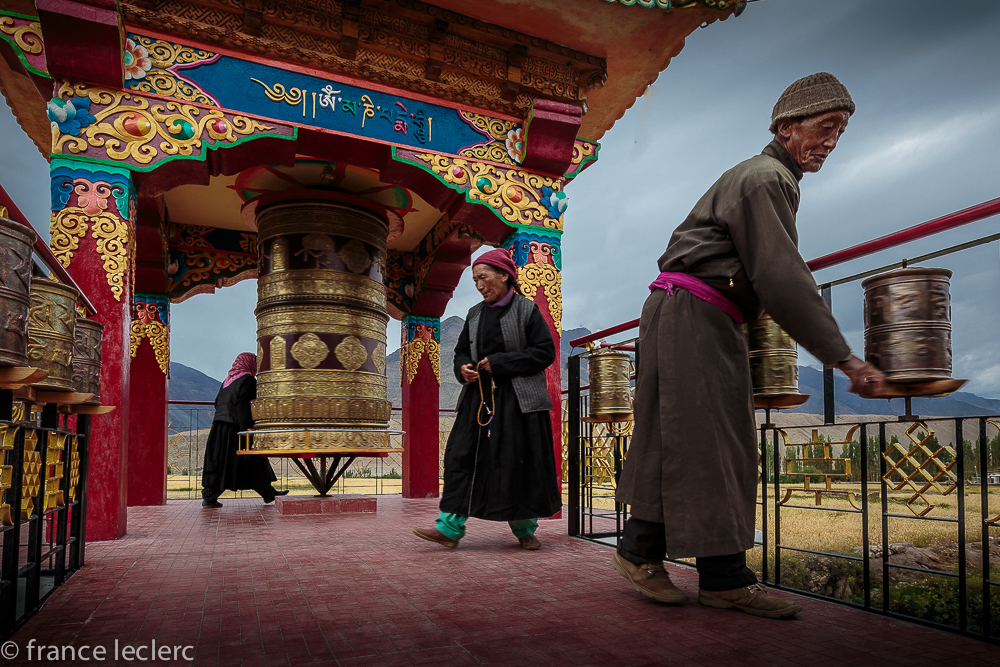