Cambodian Monks in Turmeric and Saffron 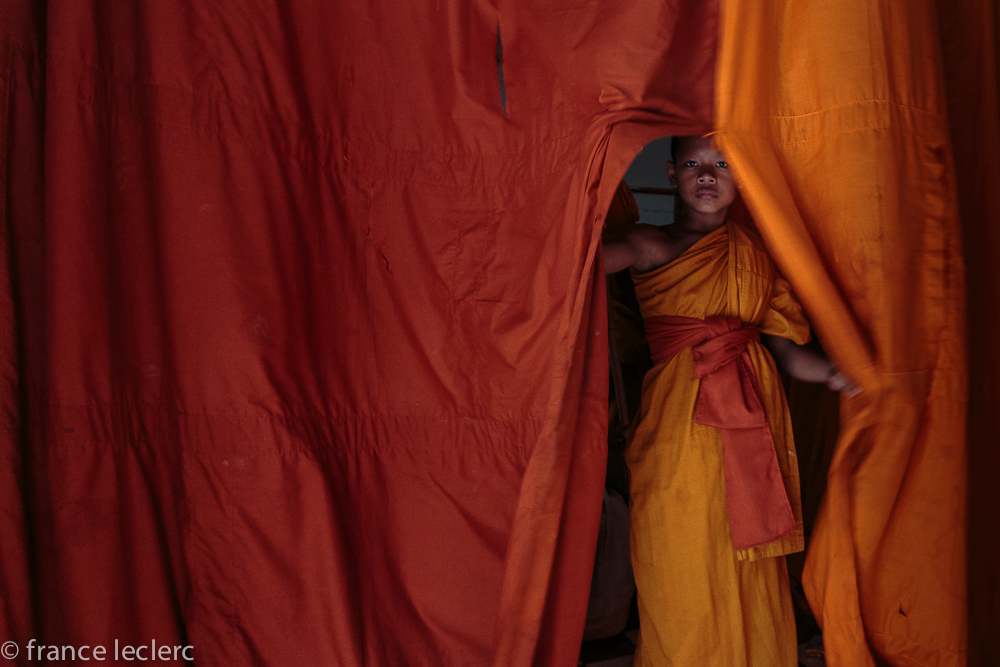 When I think of Cambodia, I always think of orange, the color not the fruit. The orange color comes to my mind not because it is the color of the Cambodian flag (which is blue, red, and white), but because orange is the color of the robes worn by the Buddhist monks in Cambodia. And for a photographer, these striking orange robes are hard to resist.

I always wondered why Cambodian monks wear orange robes (as do Thai and Lao monks) when Burmese monks wear red robes (and the Japanese and Chinese monks wear grey outfits but this is another story).  A clue to this riddle may reside in the fact that the robes of the Cambodian monks are typically (and elegantly) referred to as being of a “saffron color”. From what I learned, originally (as in Buddha’s time) the color of the robe would vary as a function of what natural dye was used to color the old cloth, which was sewn into a robe. So the color of the robes in a given geographical region originated from the color of the dyes that were available (spices, roots, fruits…) in that region. The “orange” color probably comes from dying used clothes in spices such as turmeric or saffron (more likely turmeric as saffron would have been too costly). And then tradition just kept those different colors.

The strong visual impact of the saffron robes is compounded by the fact that there are so many of them. After having been banned in 1975 by the Khmer Rouge regime (religion and art were both banned as I discussed in my two previous posts), Theravada Buddhism is back as the official religion of the state with 95% of the Khmer population being practicing Buddhists. And every Buddhist male is expected to become a “monk” for a short period in his life. This is seen as a rite of passage to adulthood. While most of these young men will return to lay life after spending some time being a novice, their presence contributes to the sea of saffron robes. A small proportion of them will take perpetual vows and will become ordained monks also called “bhikkhu” which literally means, “beggar” or “one who lives by alms”.

Bhikkhus and novices live in “wats” (temples with residence, classrooms, a dining hall, and a prayer hall) and their life follows a rigid routine. Though very surprising to foreign visitors, as per the meaning of their name, every morning monks leave the temple and walk the streets for alms-giving. They walk single file, typically oldest first, carrying their alms bowls in front of them. Laypeople wait for them and place food in the bowls. In return, Cambodian monks will chant a prayer and give them a blessing. During the rest of the day, bhikkhus and novices can be seen performing various chores, going to monk school, praying, and walking around with an umbrella (well, I was there during the rainy season.) 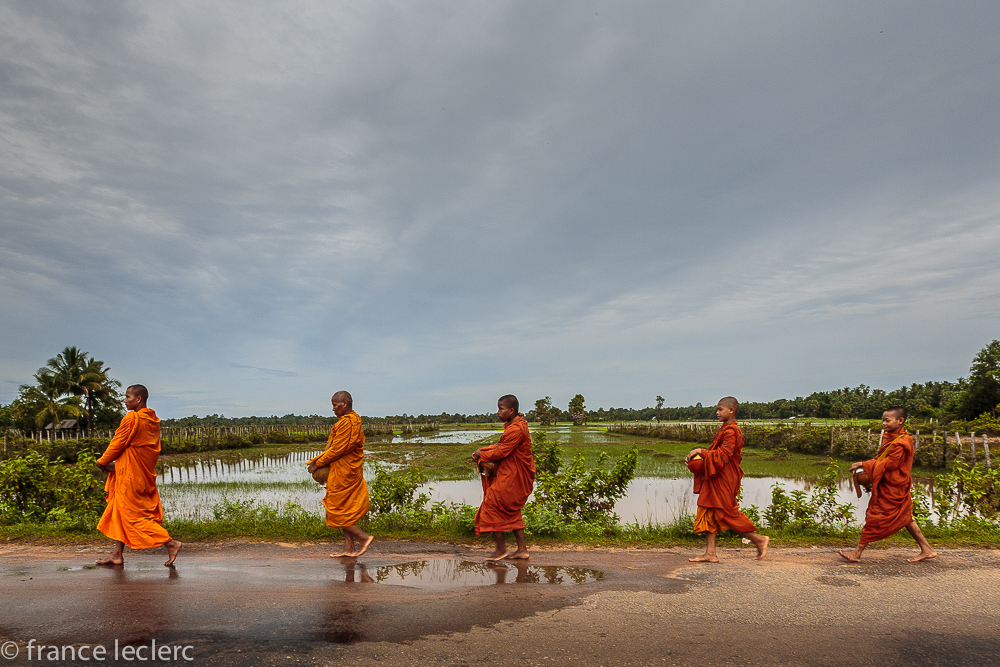 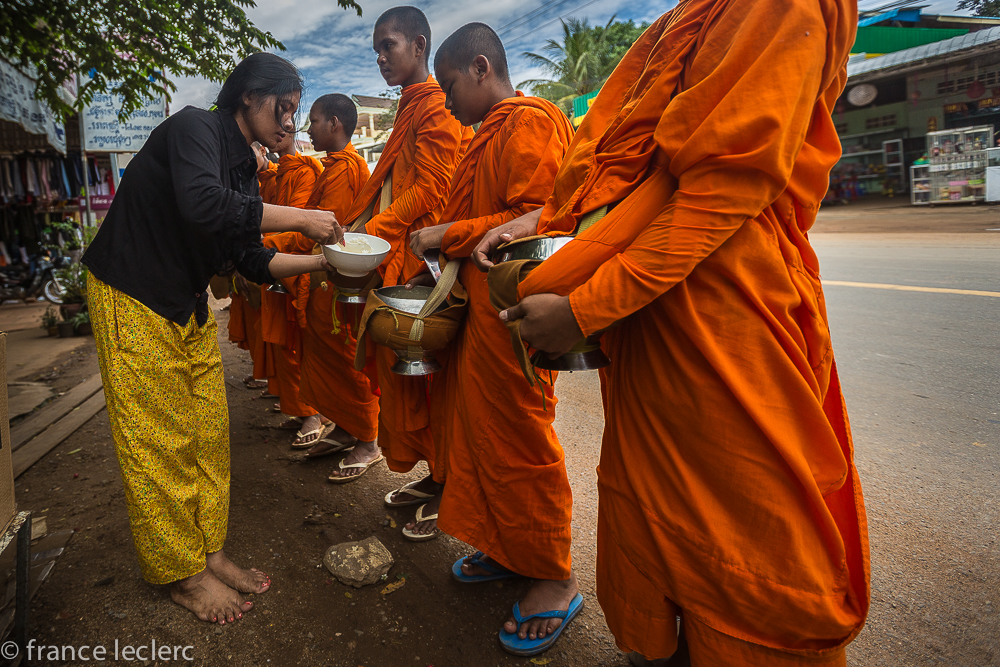 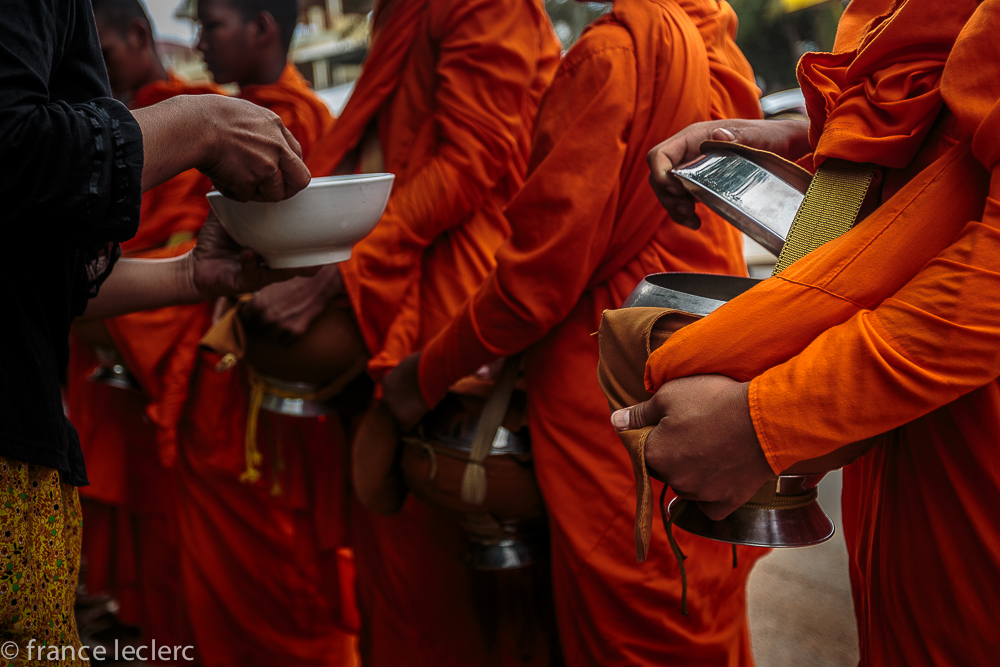 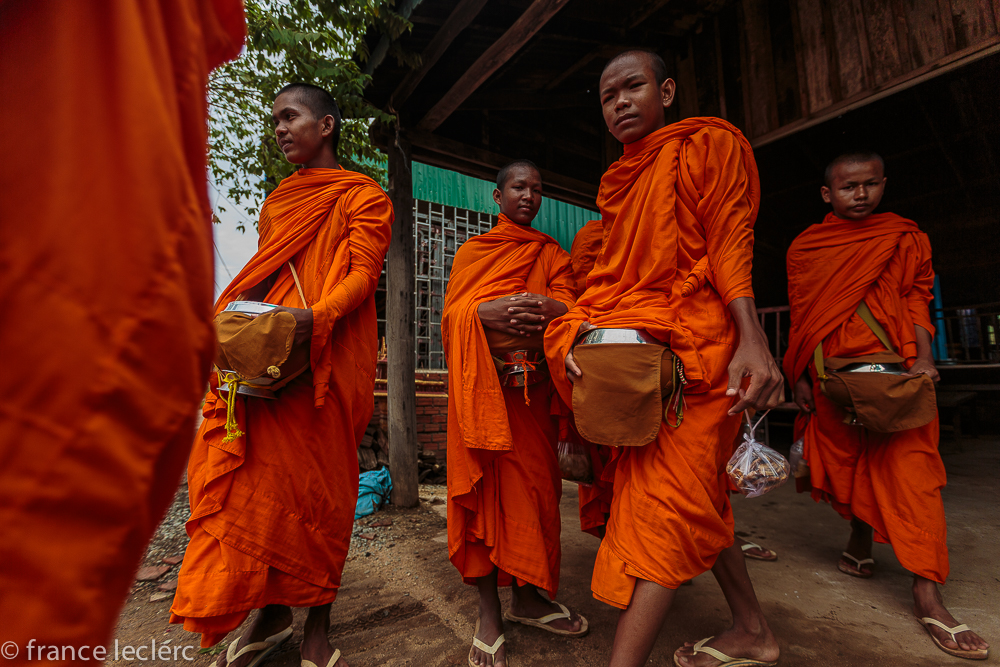 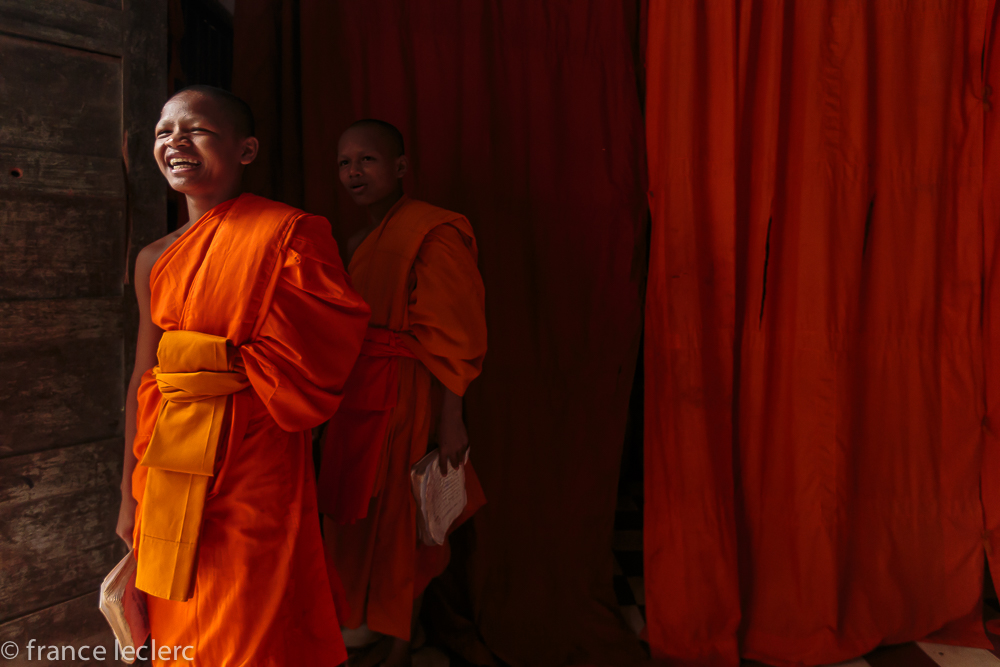 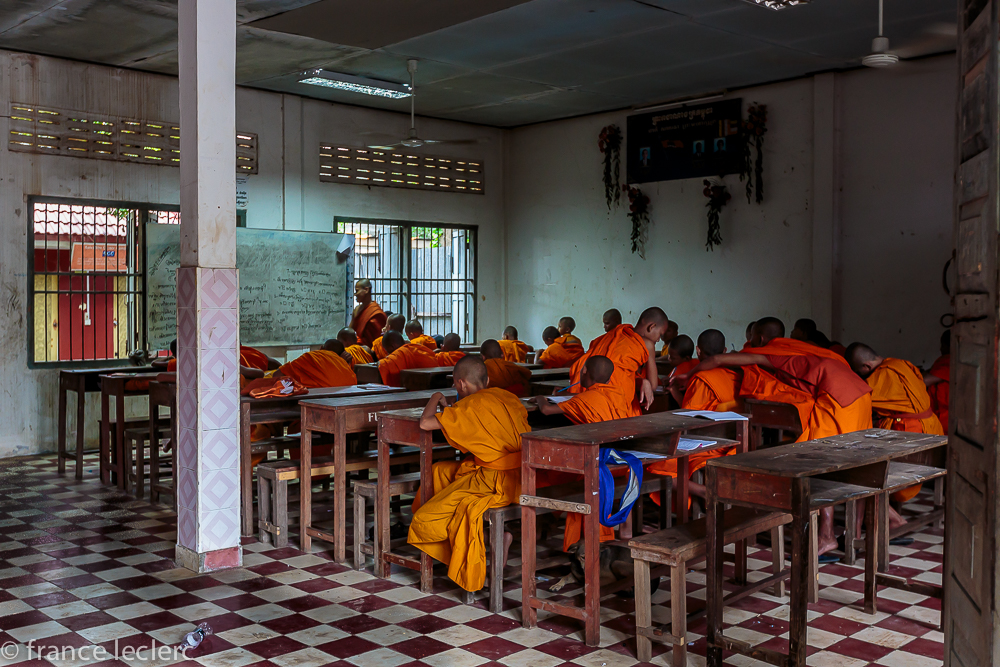 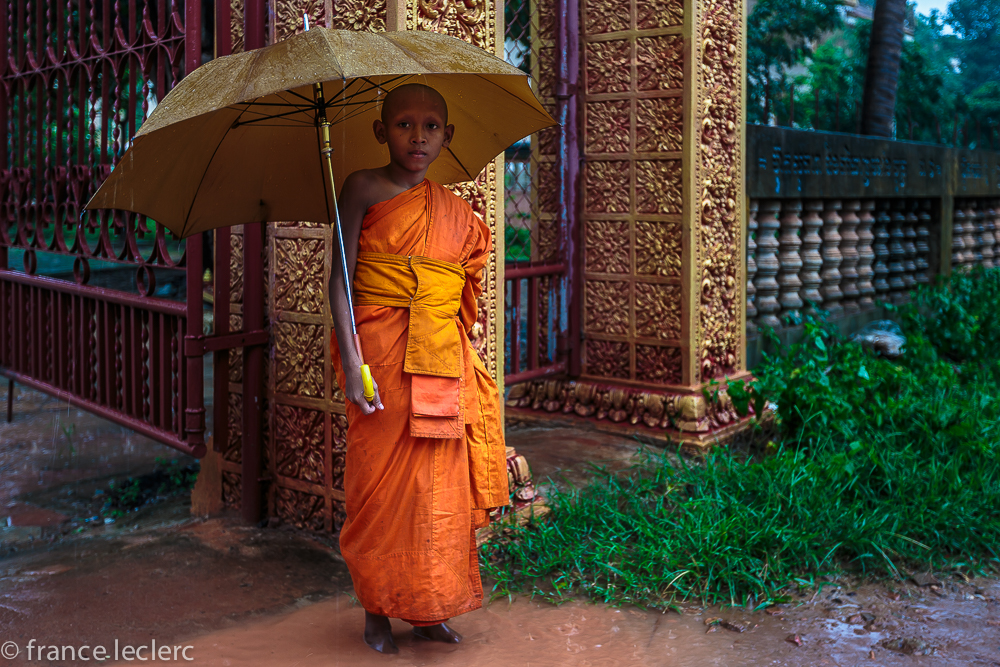 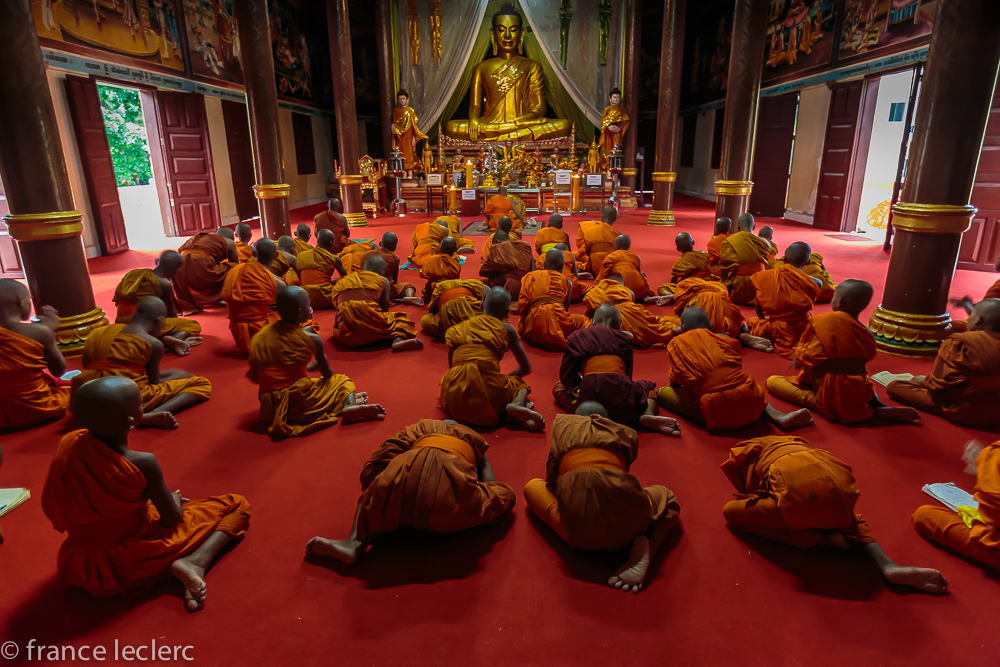 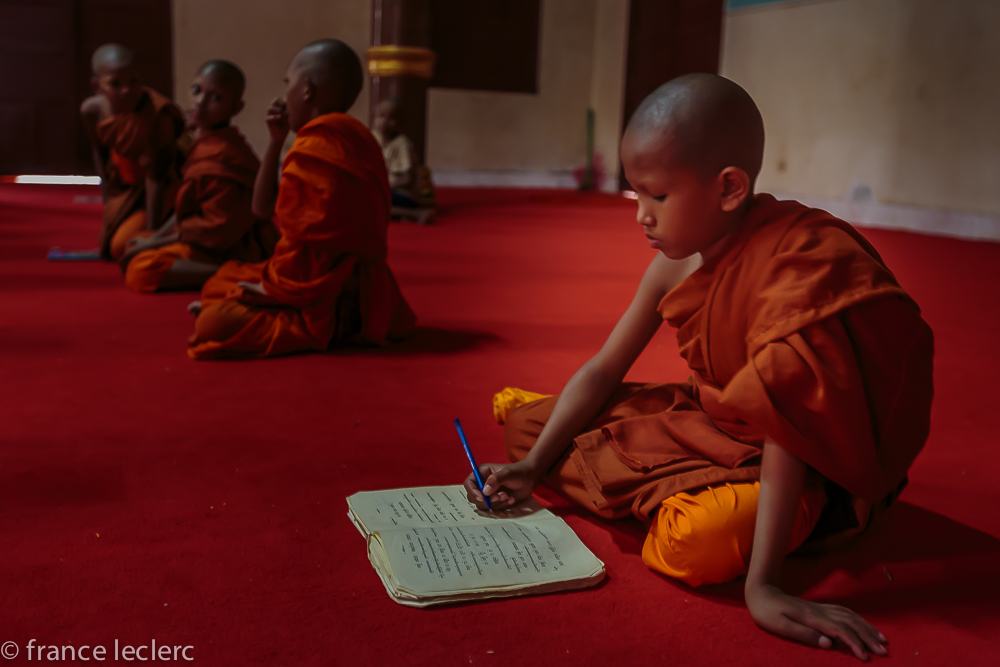 Just as practicing Buddhists have a responsibility to support the monk’s physical well-being, monks have the responsibility to support the community spiritually. Bhikkhus perform ceremonies on occasions such as births, deaths, and weddings, and more broadly they play a role in attending to the people’s social and emotional needs, just like in other religions. Along with supporting the monks, practicing Buddhists also worship regularly and particularly on Buddhist holidays at the various wats, temples, or small shrines that can be found all over the country. In large temples, one can also see older nuns giving blessings or laywomen selling incense, candles, and lotus flowers, all favorite offerings. In some of the temples in Siem Reap, one can get blessed thru a ritual bath (which to me looked more like a ritual shower). As I visited one of these temples, I witnessed a couple being blessed thru a ritual bath to the amusement and delight of their young daughter. 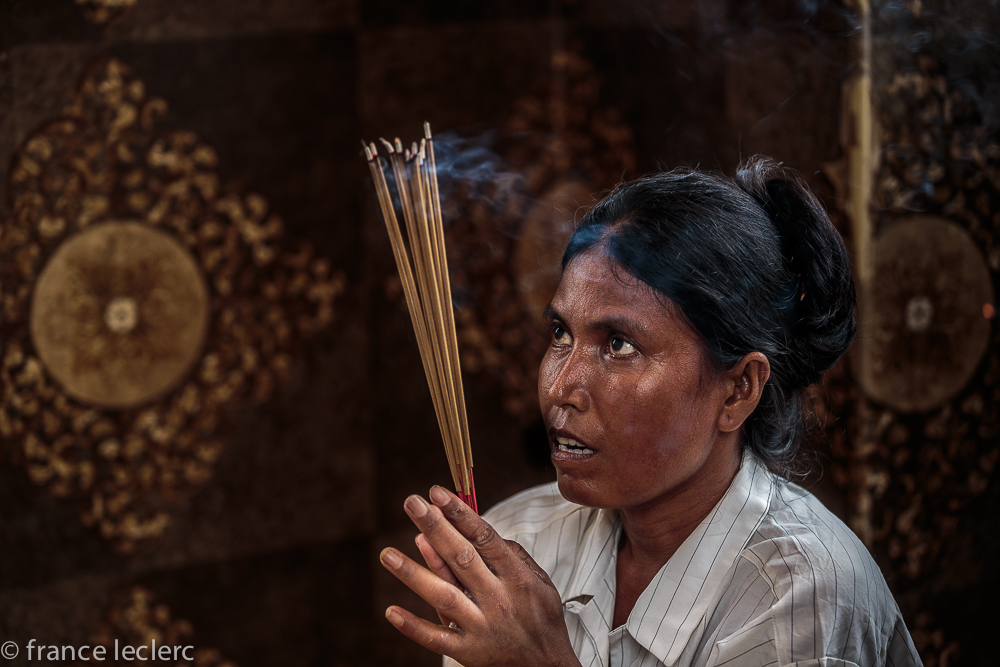 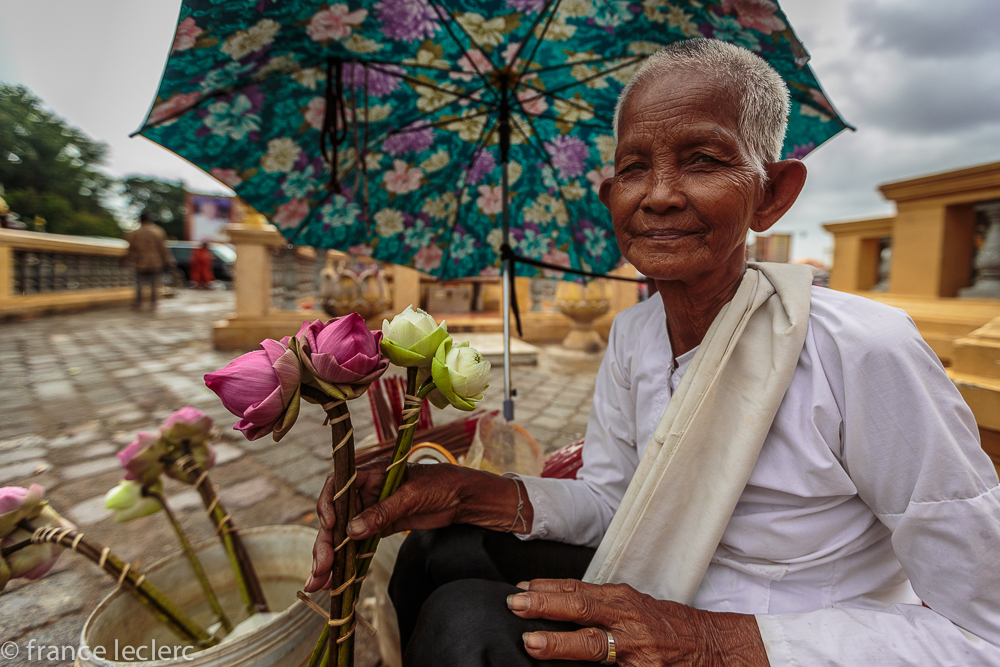 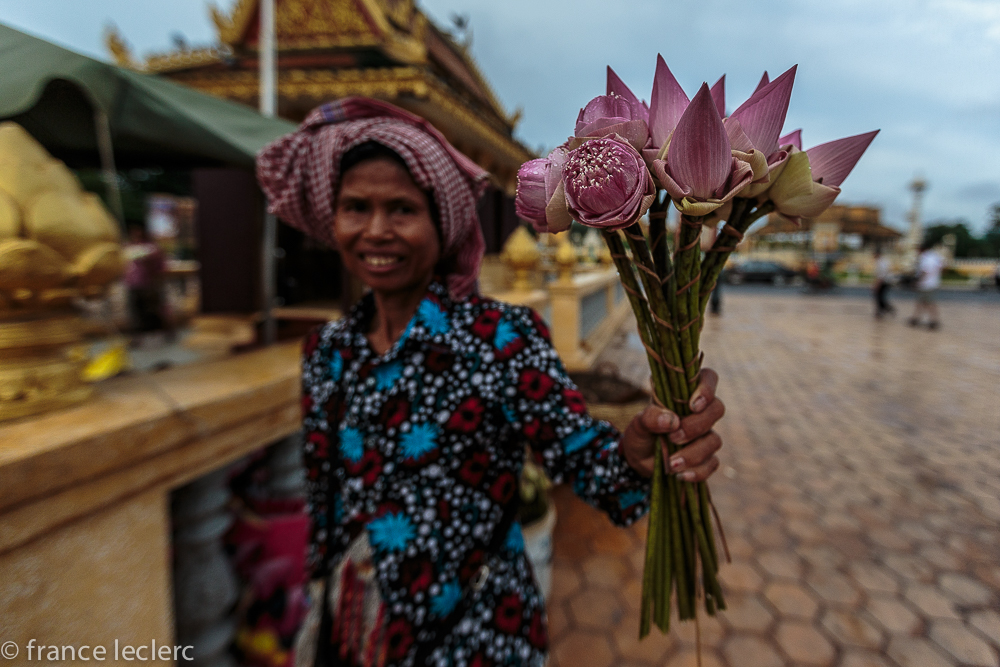 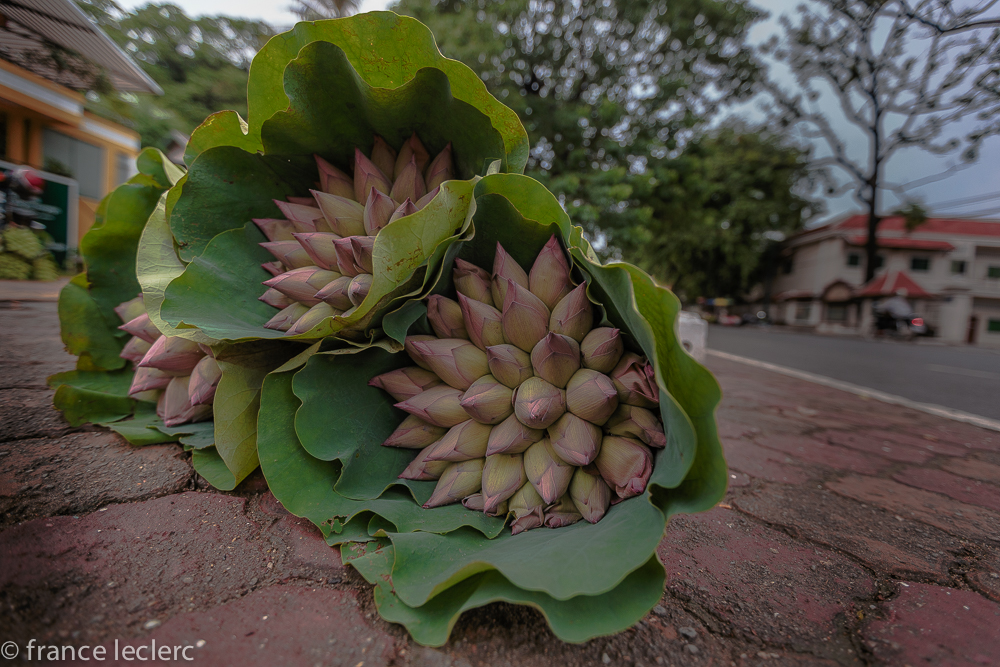 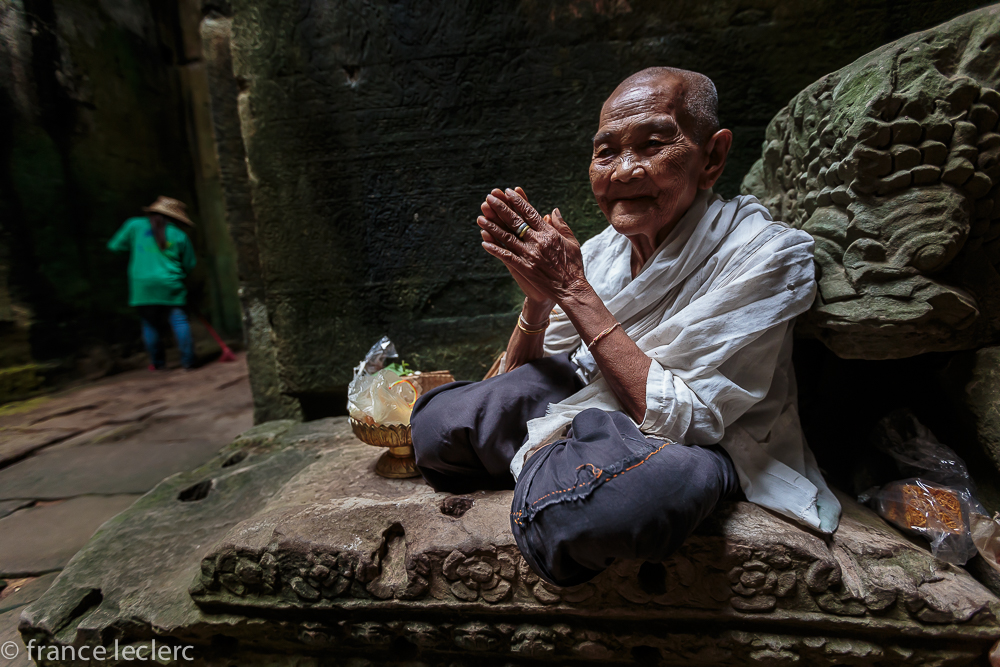 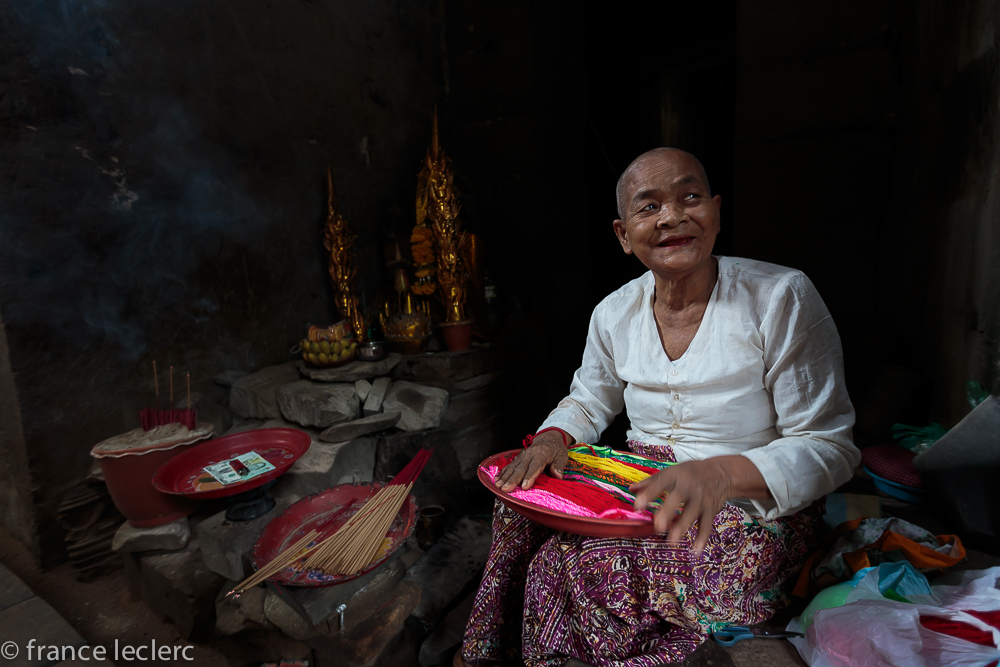 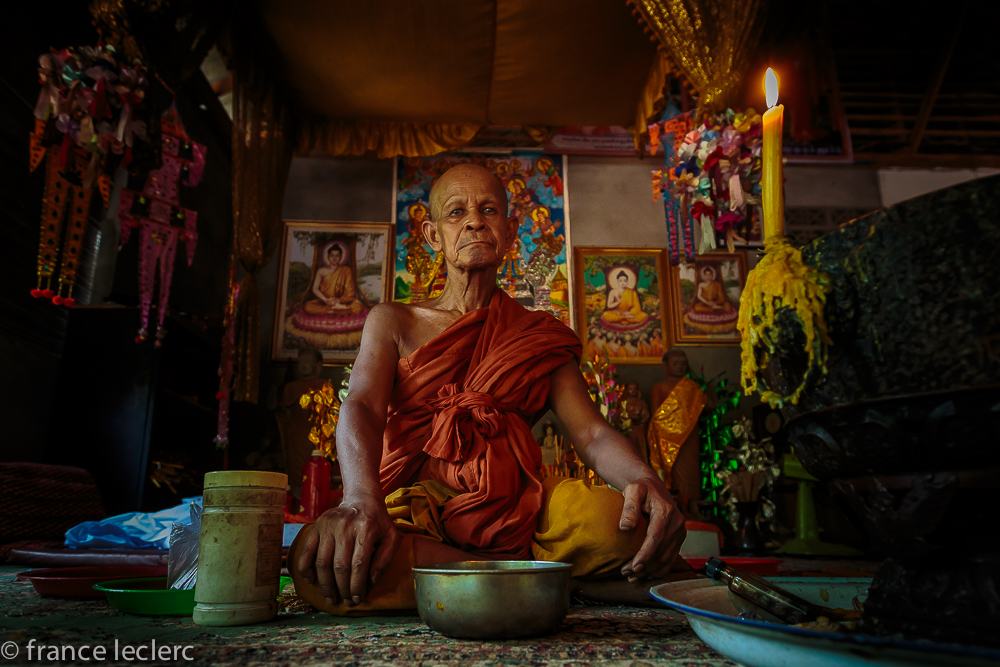 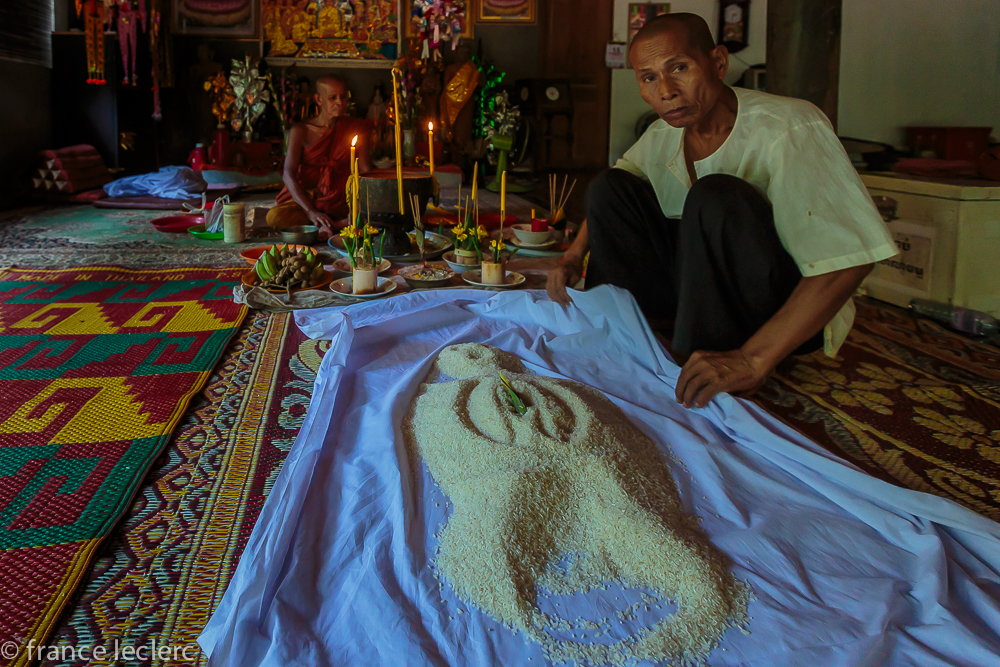 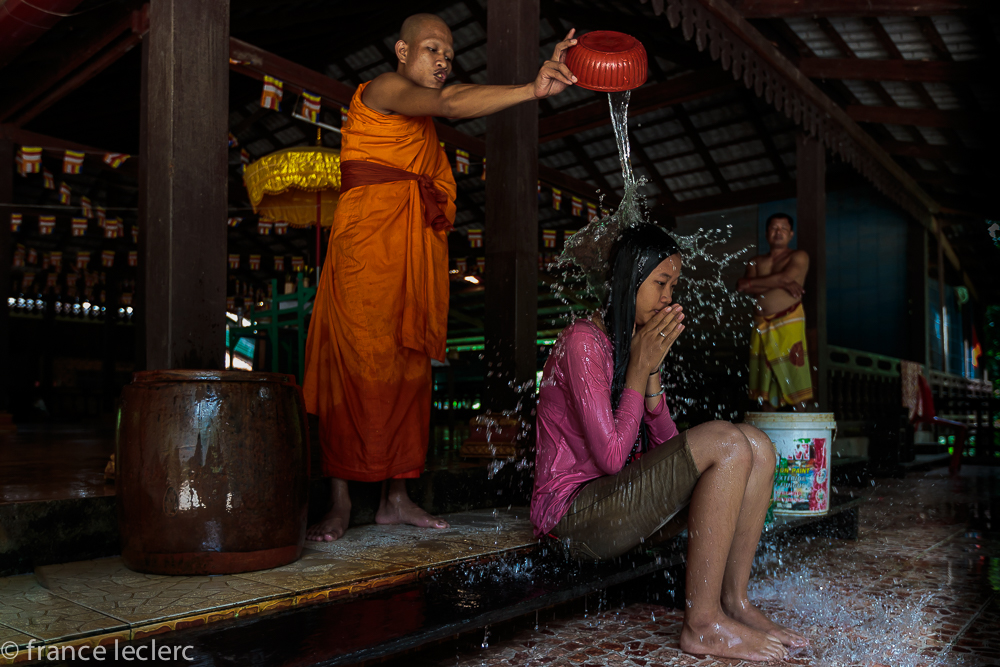 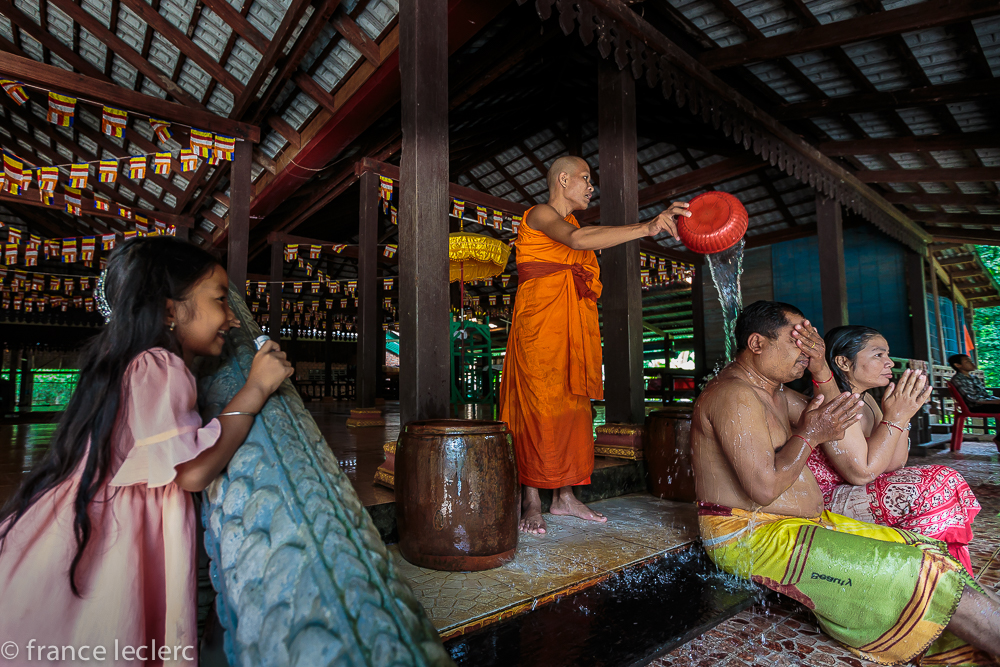 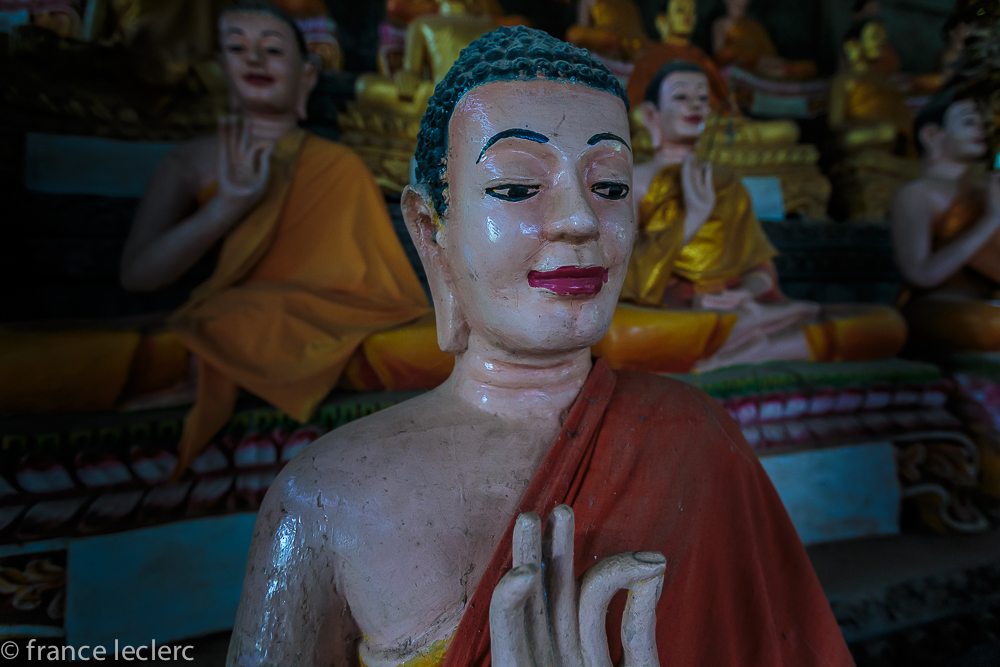