Himbas Dancing With the Stars 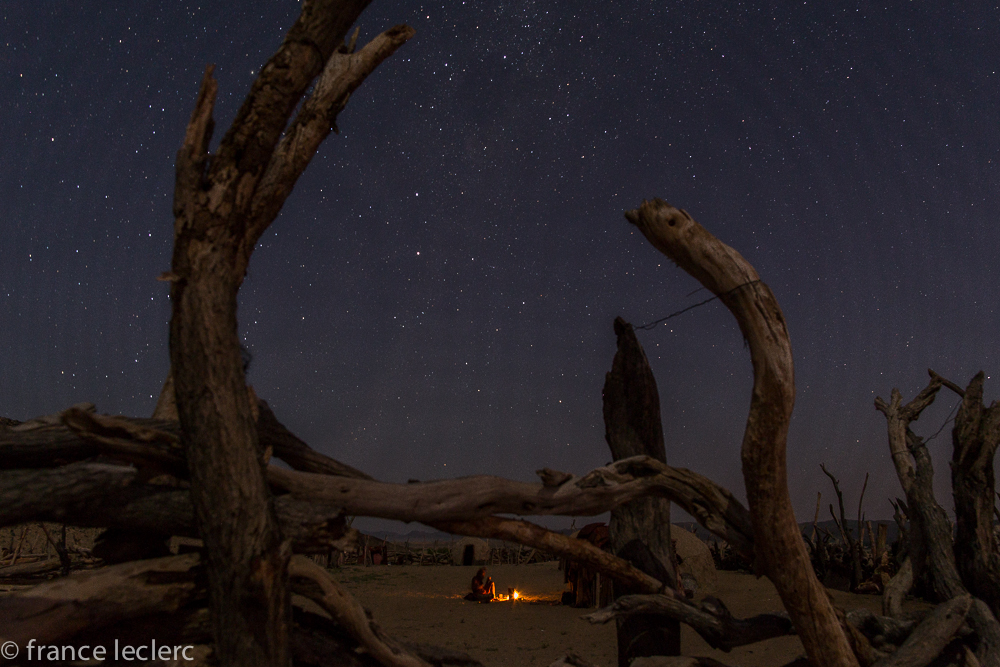 My last post was mostly about the unique and striking look of Himba women and girls. This time I would like to say a little more about how members of the Himba tribe live their daily lives. Although the Himbas are semi-nomadic, an extended family typically dwells in a homestead, a small collection of huts, surrounded by a low circular wooden fence. These huts, mostly round structures plastered in mud and dung, are built around an okuruwo (ancestral or holy fire) and a central livestock enclosure. Each homestead is overseen by a headman, typically an older man, who is responsible for the rules and traditions of the clan.

The “okuruwo” is thought of as the most important part of the Himba village. It is meant to be kept continuously lit, as it represents the ancestors of the villagers, who act as intermediaries to the Himba’s god, Mukuru. It is around this fire that the all-important ceremonies of births, marriages and coming-of-age are performed. The headman’s hut is the only one whose entrance faces the fire — all the others face away — and it is important for outsiders not to walk in the sacred area between his house and the fire (without explicit permission, which we received.)

I visited a few Himba villages during my time in northern Namibia. Most of them appeared to have very few residents, although it can be misleading as most of the men are away during the day. The first one we visited was near Puros, a tiny community set amongst stunning mountain scenery.

When we arrived at this village, the women were out fetching water, an arduous task in the heat, as the water source is far away. As expected, only women were there and Jaongarerua, the wife of the headman welcomed us. In a subsequent visit, we met the headman of the village, a surprisingly young–looking man named Samunuma (who kindly posed with his wife in front of their home), as well as another village resident, named Vemuconga. Both of the men were wearing the traditional turban over their hair. This is also when we learned about a surprising tradition of the Himba tribe. Around the age of twelve, for both boys and girls, the four front bottom teeth are knocked down. As usual with practices rooted in tradition, it was difficult to find out the reason behind this custom. I was told by someone that it was simply a matter of beauty while someone else argued that this was so that they can speak their language better. One can notice the missing teeth in a number of the images below, particularly in the portrait of the lady with a feather.

The huts are rather small and quite bare. They are mostly furnished with mats on which to sleep, goatskins hanging from the roof, as well as jars of products and adornments worn by women. Of necessity, most of the activities, such as cooking or craft, are done outside the huts. Women are clearly used to hard labor as they often have to be on their own when men are away with the cattle.

For Himbas, life revolves around the cattle. This is the basis of their wealth and survival. Every morning, the women milk the cattle, before the men of the village lead them out to graze. If there is nowhere to graze, the village may relocate, or the men set up a temporary village with their stock. Women or young girls are responsible for taking care of the goats. These goats are typically kept in a pen in the center of the village. In the homestead near Puros, two donkeys were in the livestock enclosure as well because they had been attacked the night before by a desert lion as the ghastly cuts on their backs revealed. 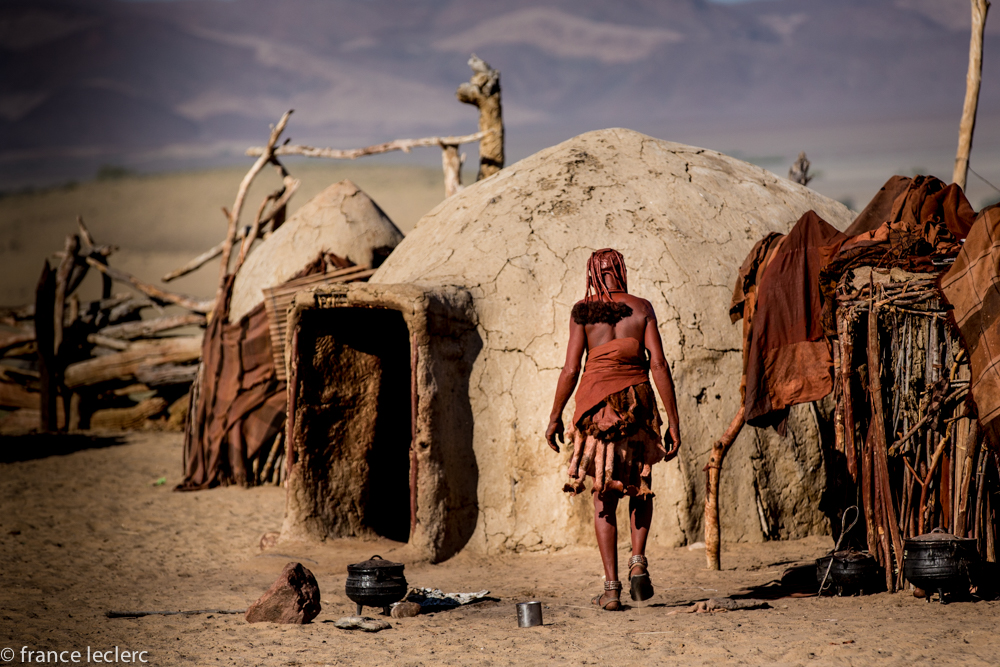 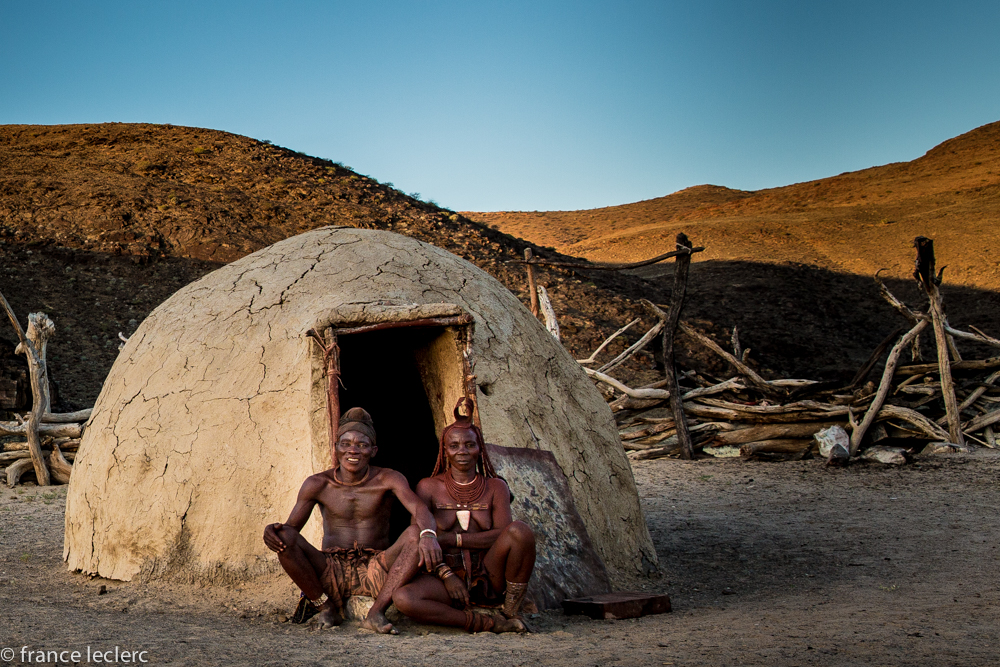 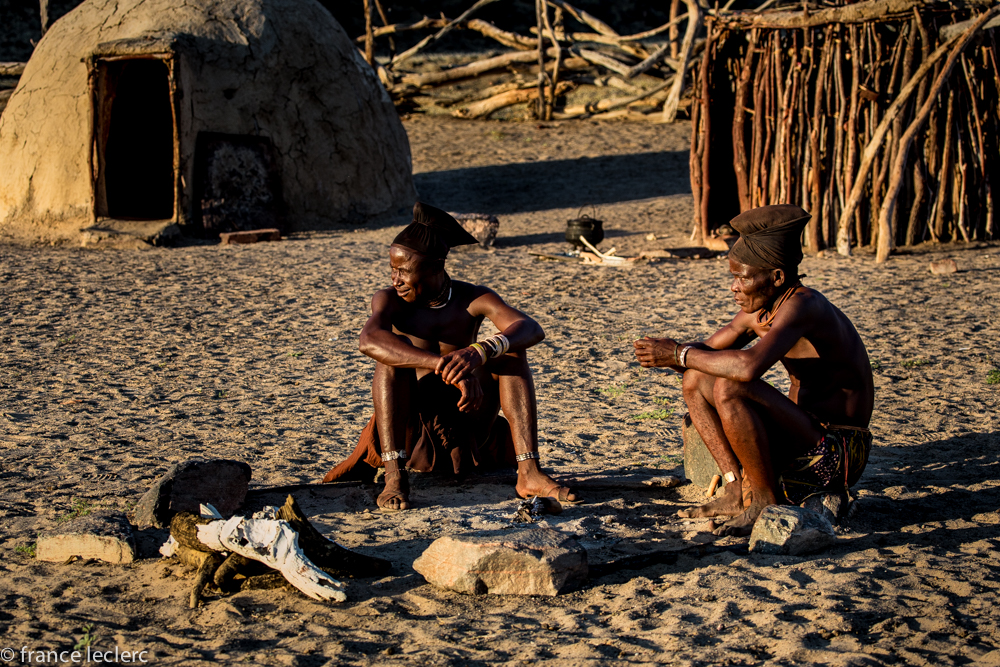 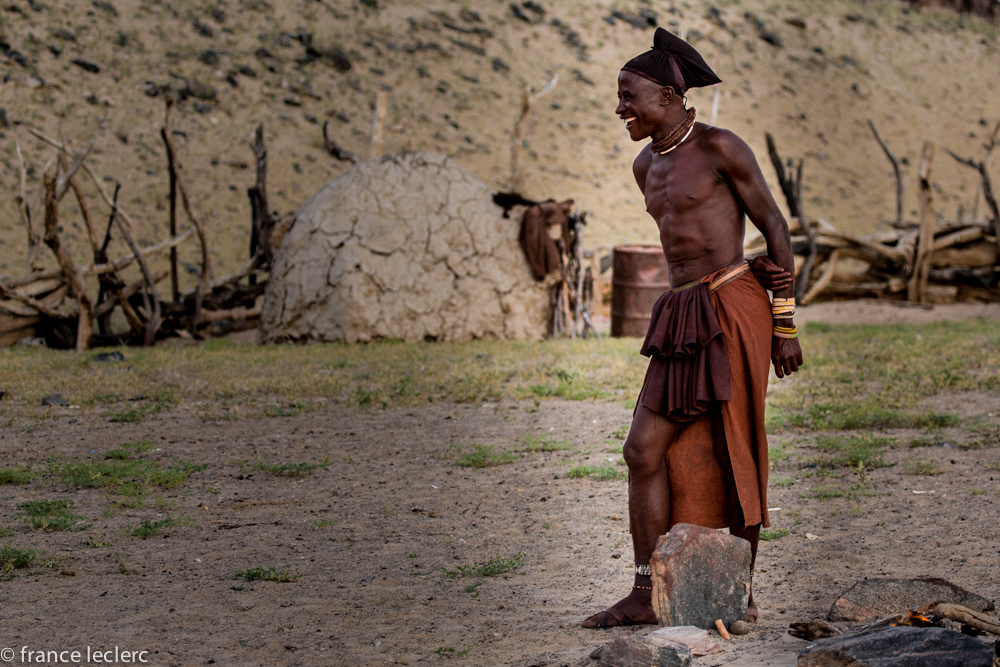 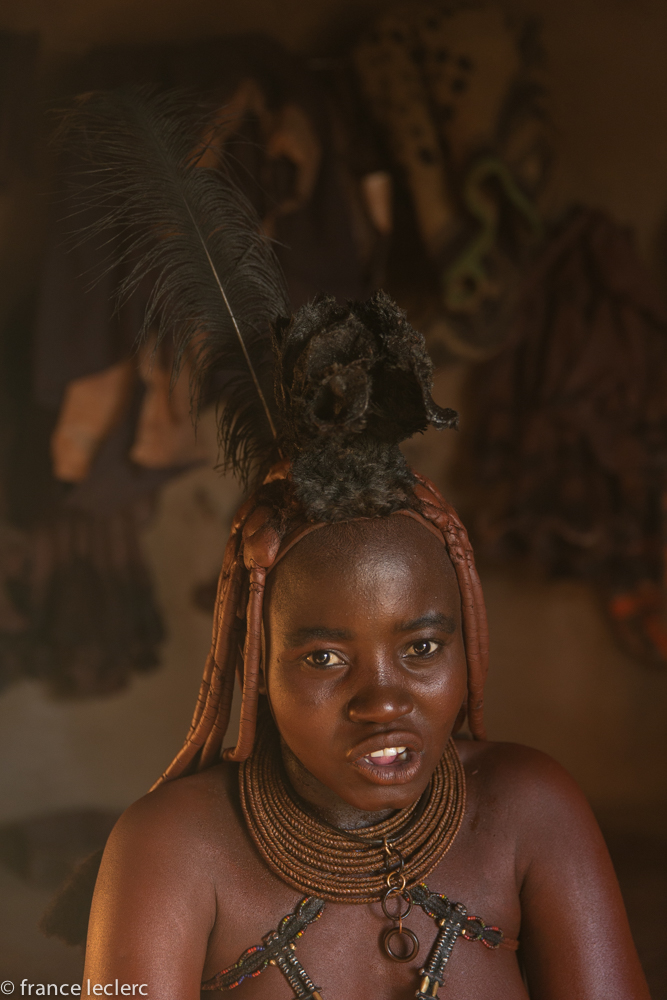 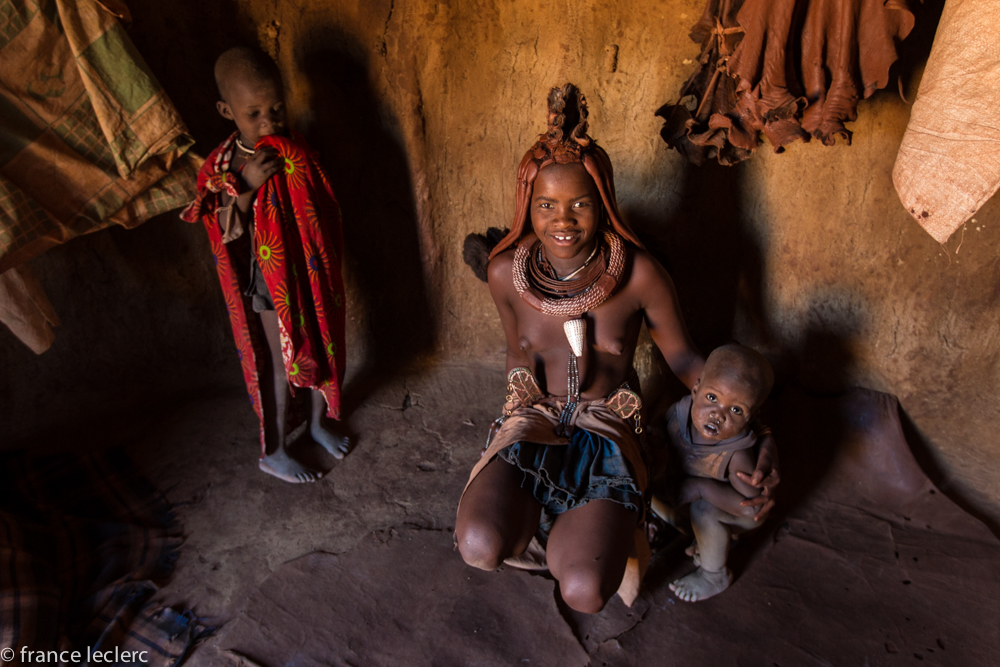 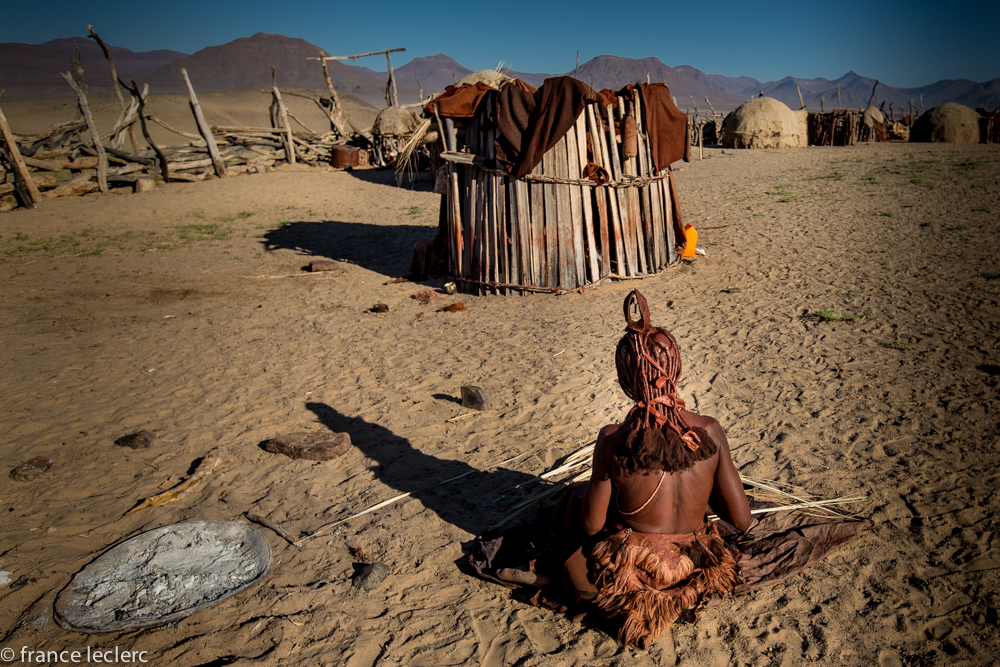 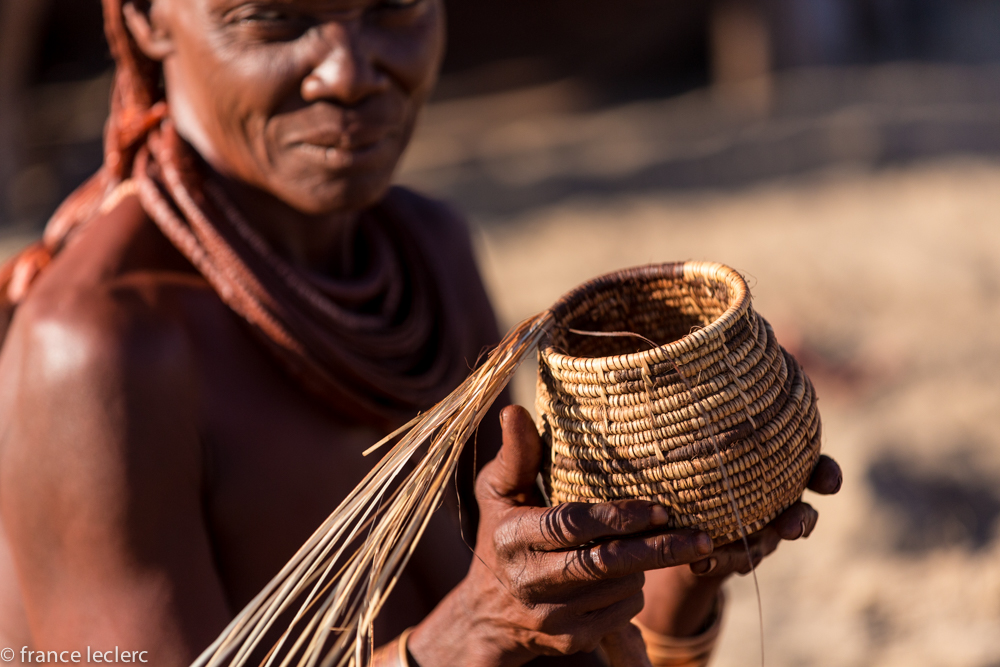 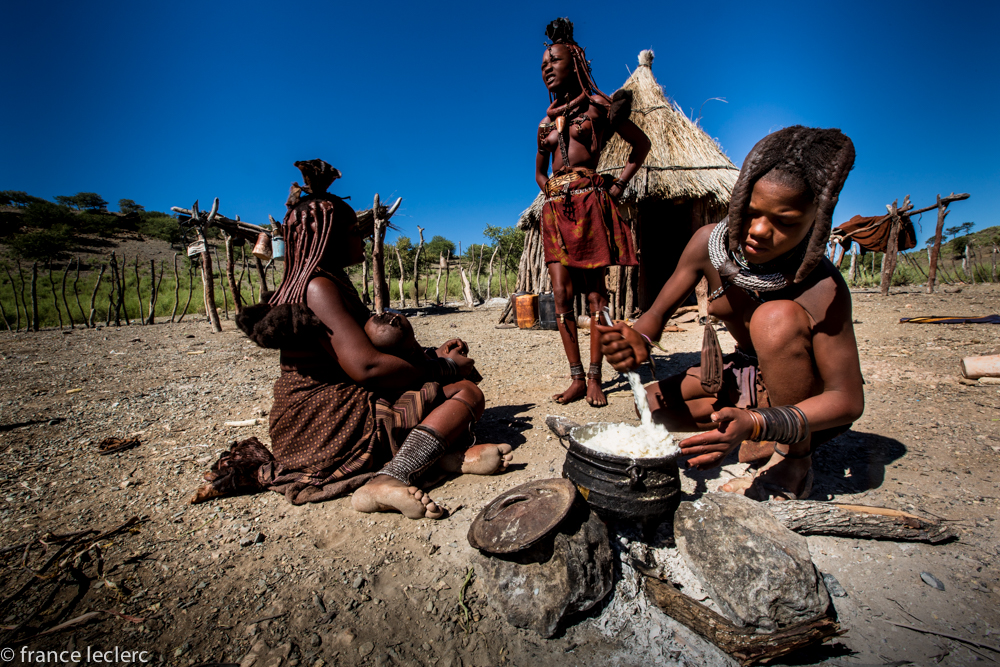 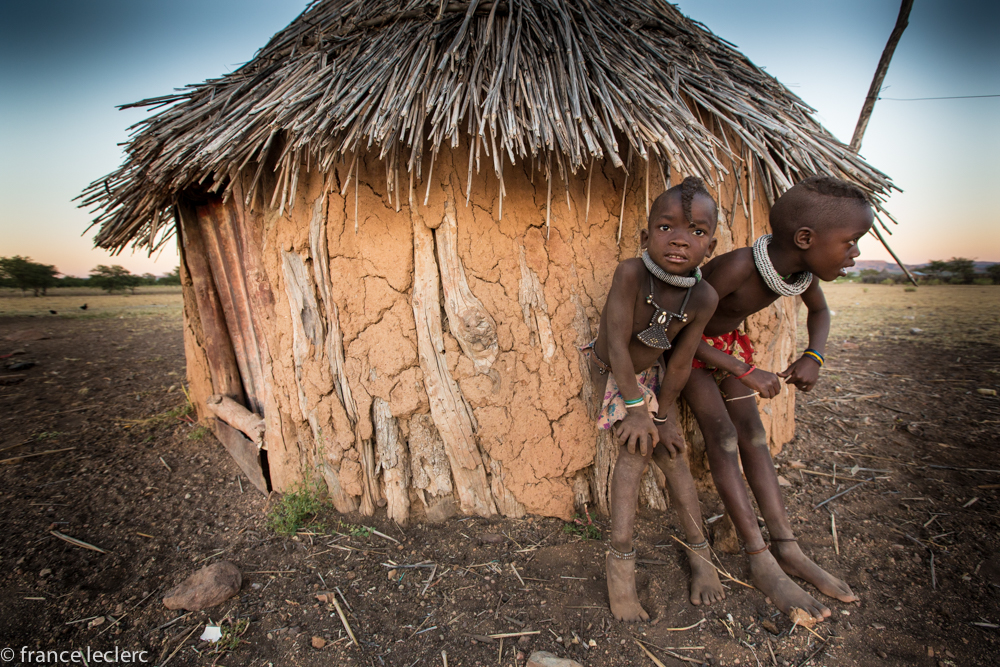 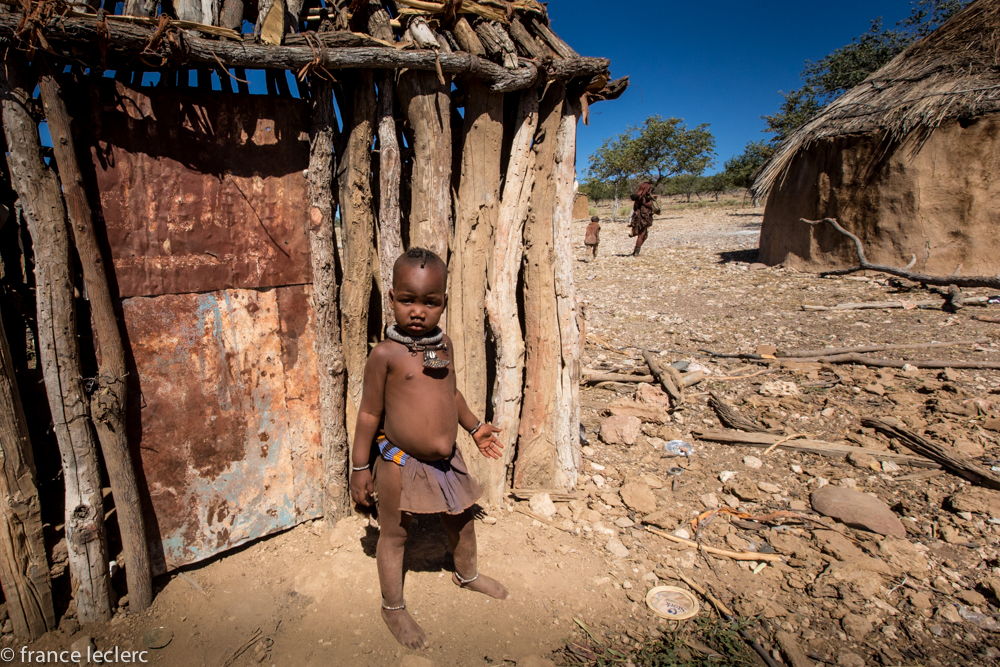 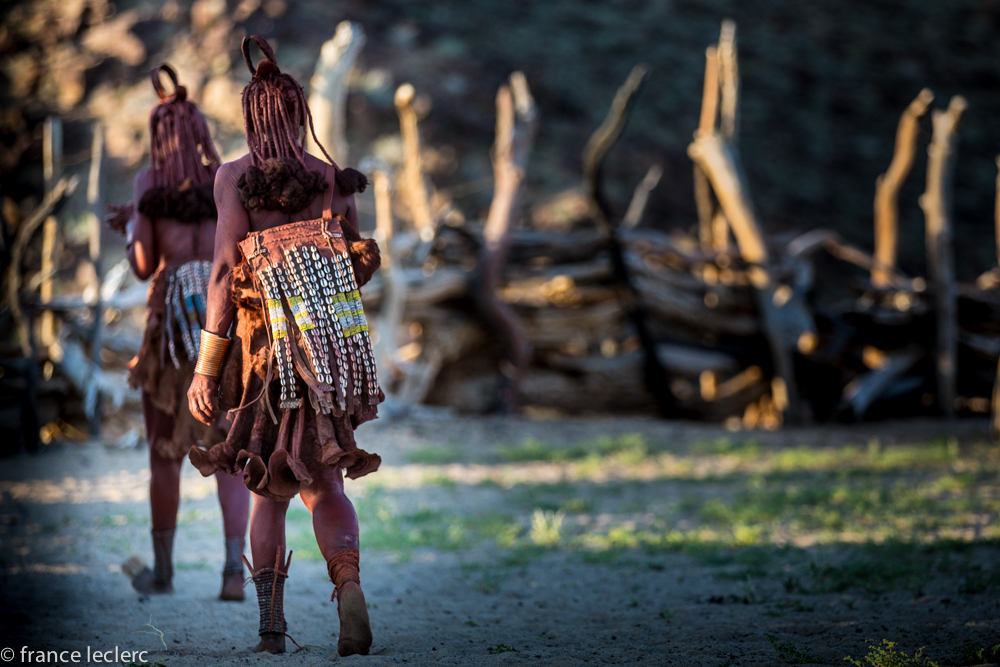 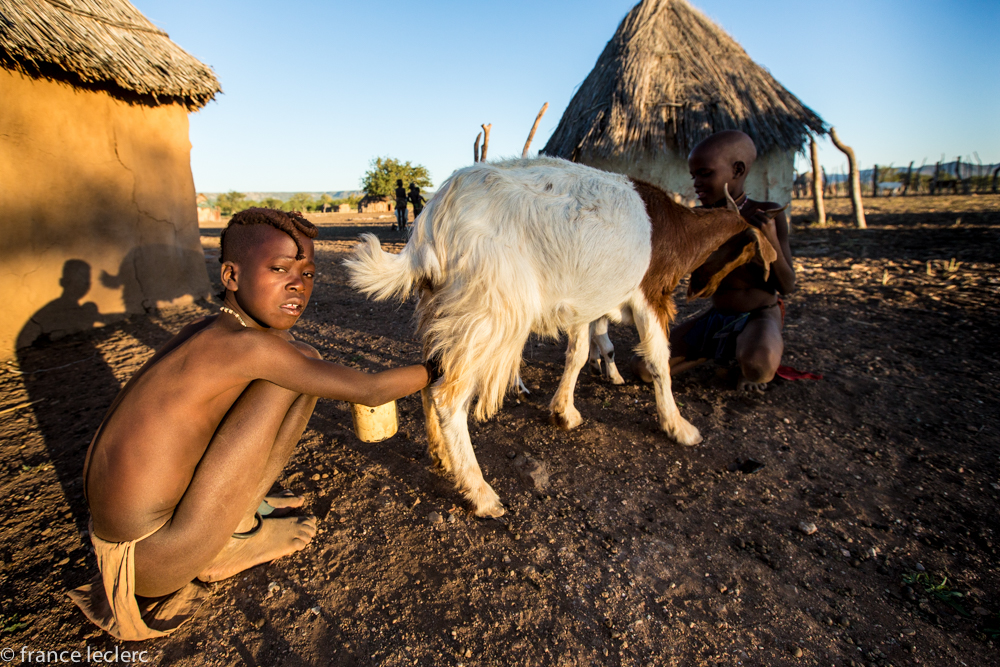 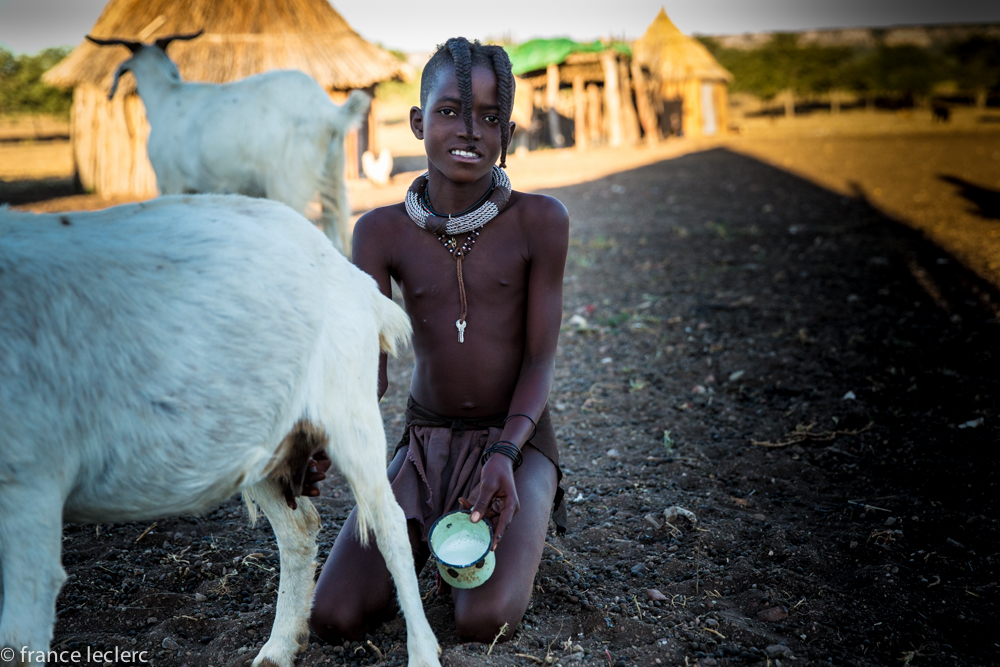 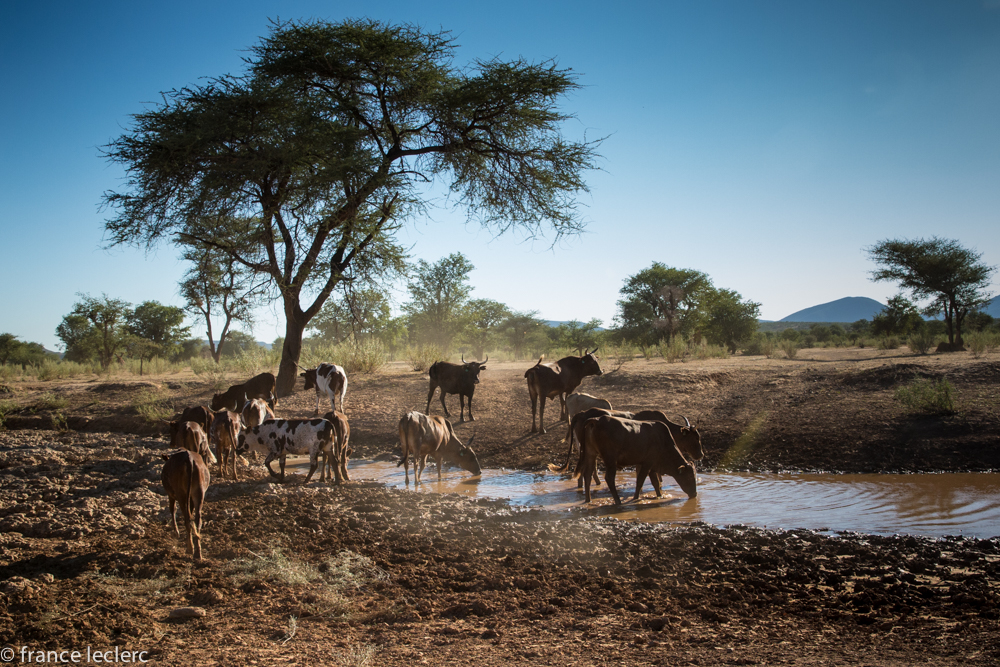 One of the Himba’s favorite activities seems to be to singing and dancing. On a number of occasions during our visits, the women would suddenly get together and start clapping and singing. Their style of dance is mostly done with all of them standing next to one another, but occasionally one will go up front for a short solo “performance” at which point the remaining members increase the rhythm and volume of the song, I assume to convey their enthusiasm at the performance. At the first homestead we visited, we had a magical evening of songs and dances around the holy fire including the headman and his wife. (To hear a very short clip of a “song” performed that evening, please click here: Himbas) 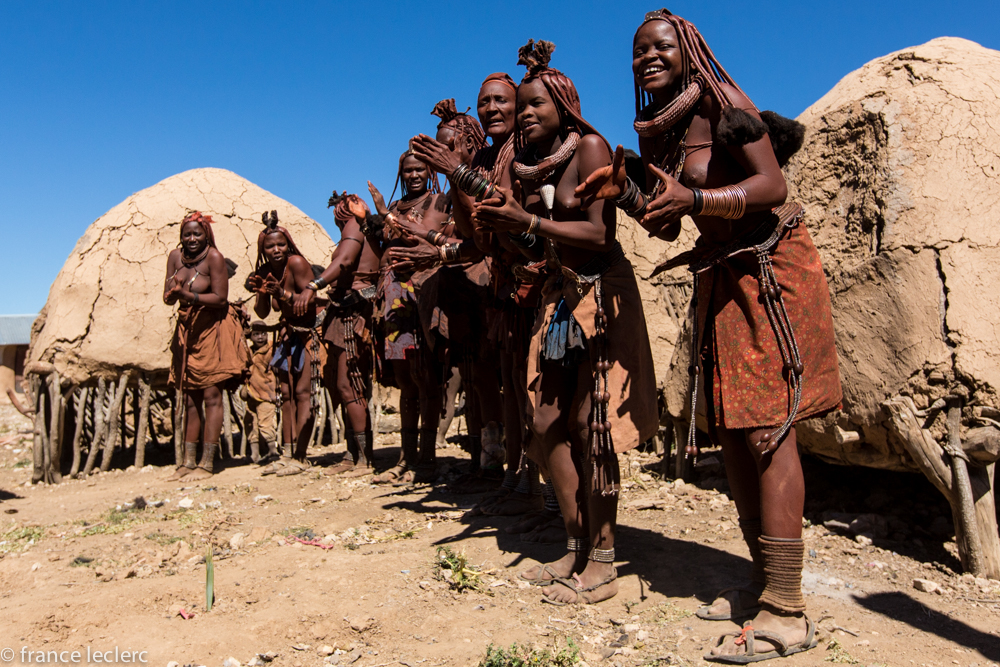 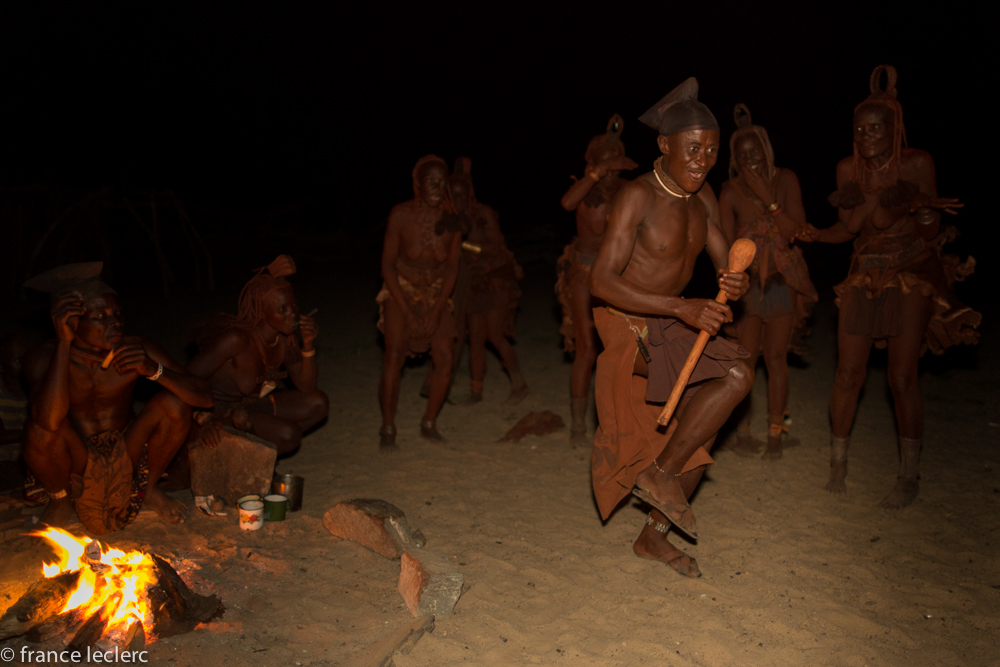 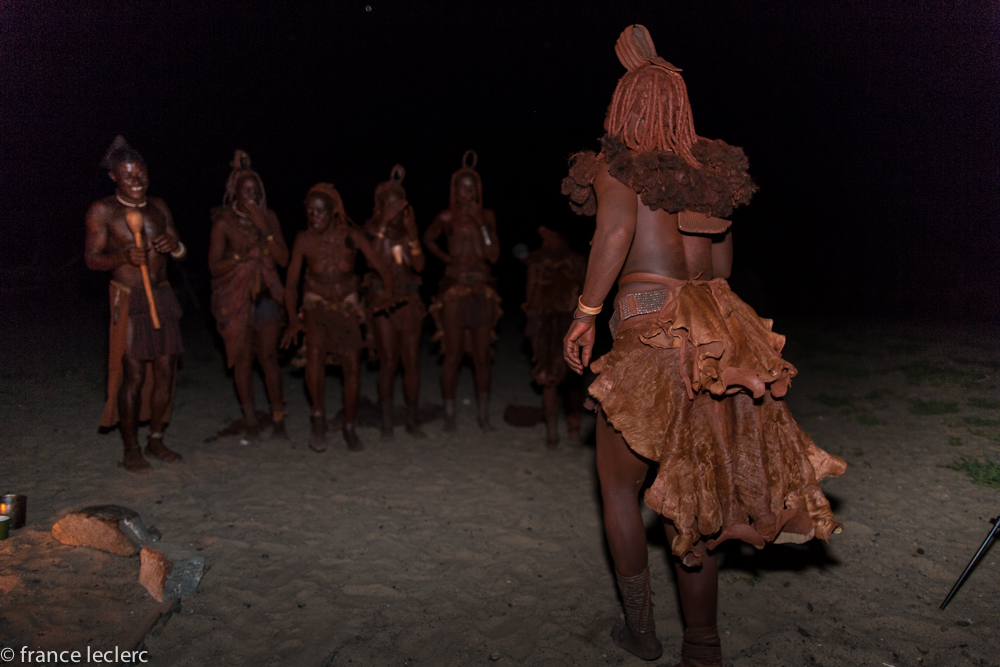 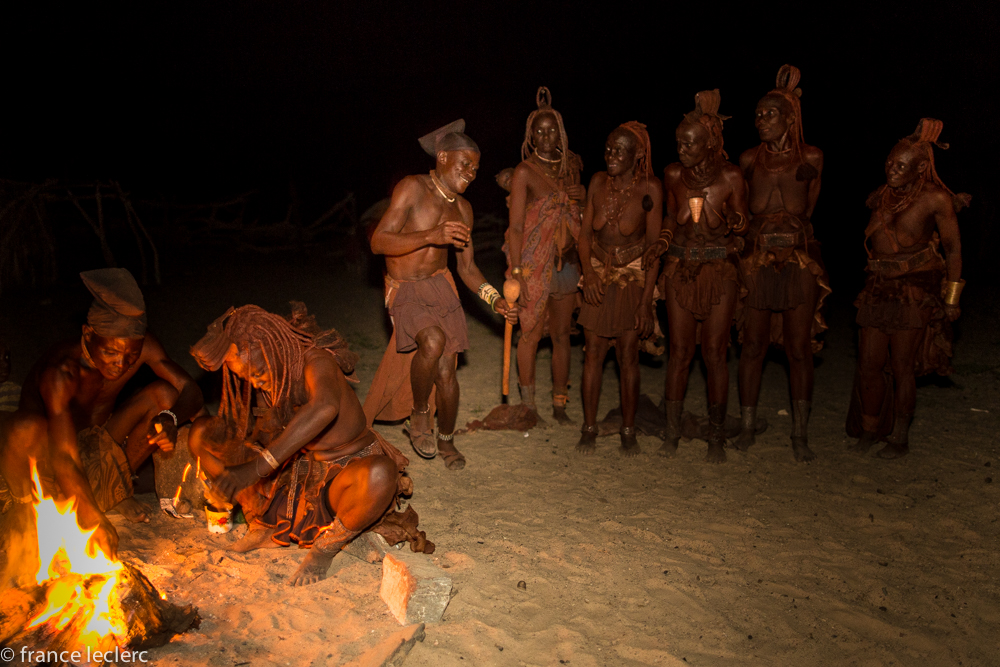 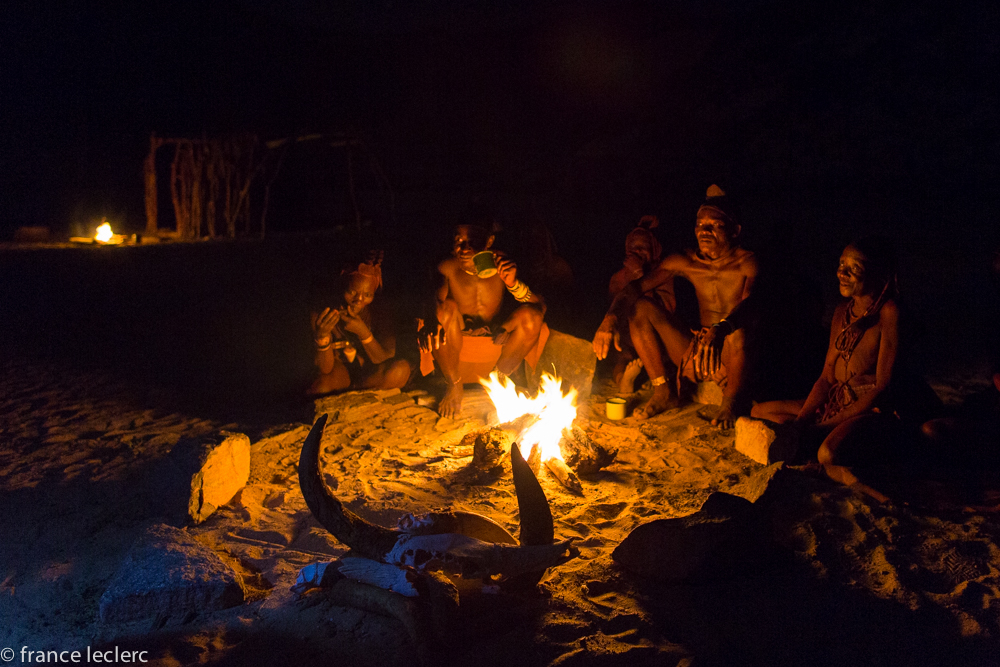 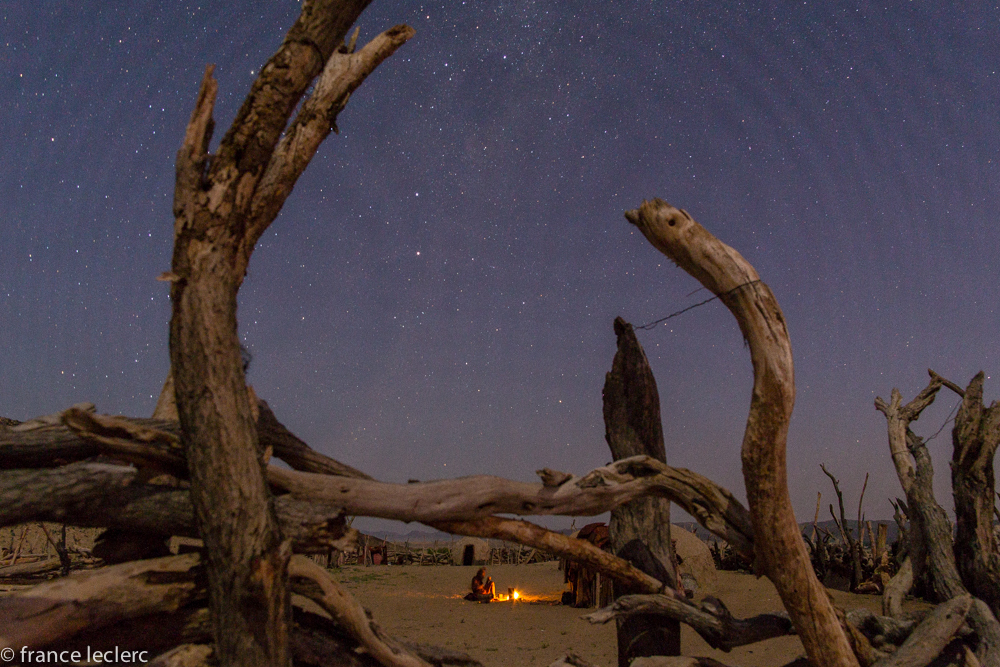 All in all, I was amazed at the fact that the Himbas have maintained much of their traditional lifestyles after having faced so many challenges such as wars, droughts, and the prospect of a proposed hydroelectric project. The question, of course, is whether they will continue to live this way for much longer.   Jaongarerua, the wife of the headman in Puros, says she has five children, three of them living the traditional ways, the other two having adopted a Western style of living. From what I could see, women are more determined to resist the modern lifestyle than men, at least with respect to clothing. Men are more likely to be seen wearing t-shirts. The proximity to a somewhat modern city did not seem to impact greatly the ways of the Himba women either. One of the villages we visited was located near Opuwo, a small town close to the Angola border. We saw Himba women all over town in their traditional garbs, at most loosely covering themselves with a large piece of cloth. And of course, the occasional cell phone, dangling from their neck like an additional necklace.