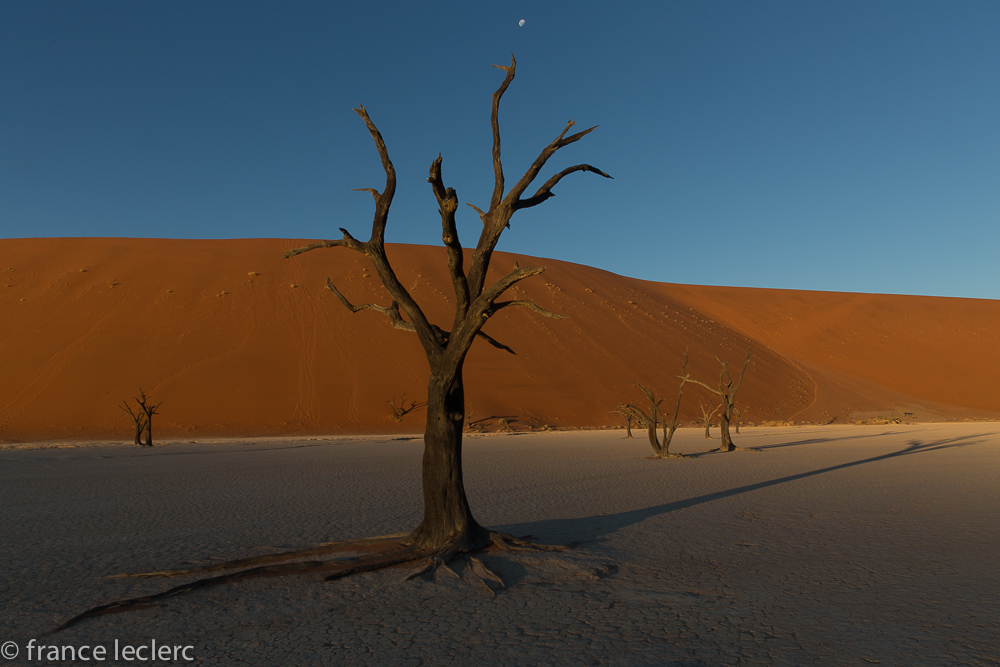 I have recently returned from an exciting journey to stunning Namibia, a West African country much visited for its wildlife. Although I did not shun the wildlife completely, I mostly focused on the unique cultures in northern Namibia, while also experiencing the dramatic southwestern desert environments. As such, I spent most of my visit in and around the beautiful and challenging Namib Desert, which the country is named after. (Interestingly, because of the vast and mostly unpopulated Namib desert, Namibia is one of the least densely populated countries in the world, second only to Mongolia. Namibia is twice the size of California and has only 2 million inhabitants.) The Namib Desert is well-known for the Sossuvlei area which boasts the highest (and most-photographed) free-standing sand dunes in the world. This arid desert is also home to the Deadvlei area with its striking dead camel thorn trees. And just north of the desert, in Kaokoland, is the challenging environment where the Himbas, one of the most colorful tribes I’ve encountered, have chosen for their home.

At the must-do stop of Sossuvlei, one begins seeing a lot of red. No doubt, this is a stunning landscape. You stand in a yellowish-white claypan (flat surface area) but you are surrounded by gigantic sand dunes with a red-orange hue. I can testify that climbing one of the dunes at dawn is harder than it looks, but offers spectacular views when you finally reach its apex. The Deadvlei, on the other hand, is even eerier than I expected, with these dead trees still standing across the red background of the sand dunes, looking like giant fingers waving at you. This is all good preparation for a meeting with the local tribe that has taken the red color of the sand, the Himbas.

There is a lot to say about the Himbas. They are a semi-nomadic tribe of pastoralists and estimates of their numbers vary widely between 20,000 and 50,000. But what sets the Himbas apart in a photographer’s eyes is their striking appearance, particularly the women. This is what I will focus on here, and will hold off discussing their lifestyles until the next post.

Himba women get their unique reddish hue by covering themselves entirely with “otjize”, a mixture of butterfat, ground red ochre, and a fragrant local resin (also now called Namibian myrrh). I was told that the Himbas enjoy the red as it symbolizes the earth’s rich color as well as the color of blood, a sign of life. I was also told that those Himba women mostly use â€œotjizeâ€ because it acts as a natural sunscreen and as an insect repellent. Whatever the reason, this practice gives them a stunning look as women cover not only their body but also their hair, clothing and jewelry.

The Himbas wear little clothing, women traditionally only wear skirts made of multiple layers of goatskins. Some of them add to their skirt a final layer animal skin all covered with shells as a distinctive adornment. Himba women also wear belts that they configure in a way to convey the number of children they have. The beaded anklets, though mainly worn to protect their legs from venomous animal bites, also convey information about their marital status and family size via the height of the anklets and the number of threads holding them together. Nowadays, some women also seem to use the anklets as a “wallet”; this is where a woman stored her hard-earned money after I purchased one small necklace from her.

The Himbas seem to enjoy jewelry. Most women wear a large white shell necklace that is a family heirloom handed down from mother to daughter. They also wear heavy necklaces and bracelets made of iron and copper as well as lighter pieces made of wiring and seeds. Now that they see foreigners from time to time, they sometimes include objects discarded or left behind by them; lots of women use keys as ornaments, a cross was proudly used as a decoration for a headdress by one of them, and a feather by another.

Another unique characteristic of the Himbas is their hairstyle, which varies as a function of their age and social status. Single men wear one plait backward to their necks, while married men wear a turban that they never take off (unless their spouse has died). Small children tend to have shaved heads, and as they age, they grow their hair into two plaits. When a girl reaches puberty, the plaits are moved to the front so they cover their eyes, so as not to attract men’s attention. Women all wear many streams of braided hair, but only married women wear a dramatic headdress also made of animal skin. These headdresses vary as a function of the clan to which the women belong. I visited several Himba villages in two areas and the headdresses were quite different.

For those of us knowing that it can take some time to look our best, it is not surprising that the same is true for Himba women. So we see many of them busy smearing themselves with “otjize” or helping one another with their dreadlocks. As water is very scarce in their part of the world, women often purify themselves and their clothing by using the smoke generated by burning the wood of a local tree. 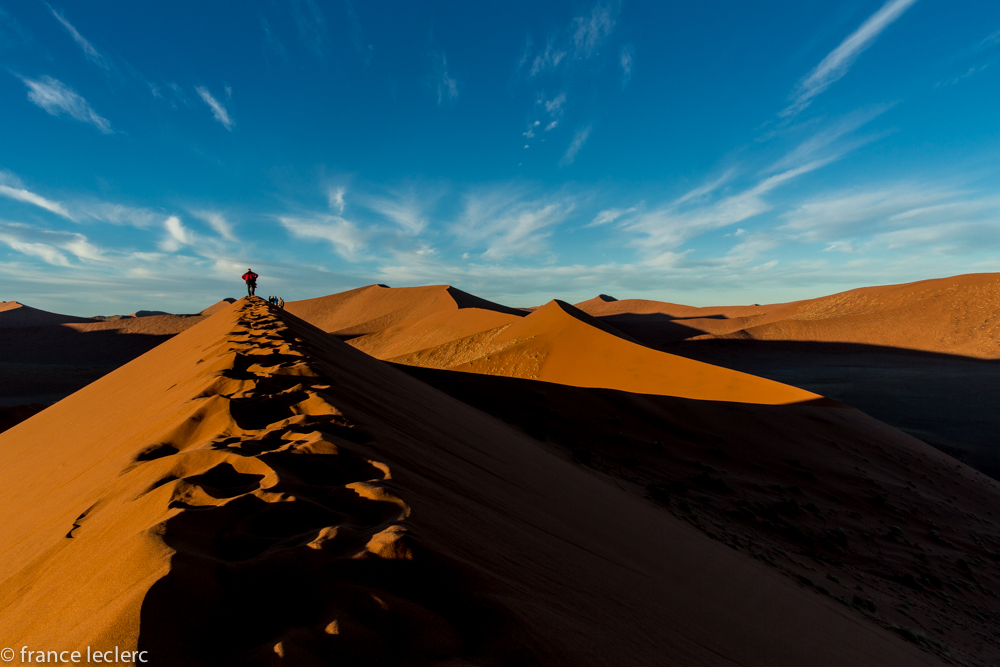 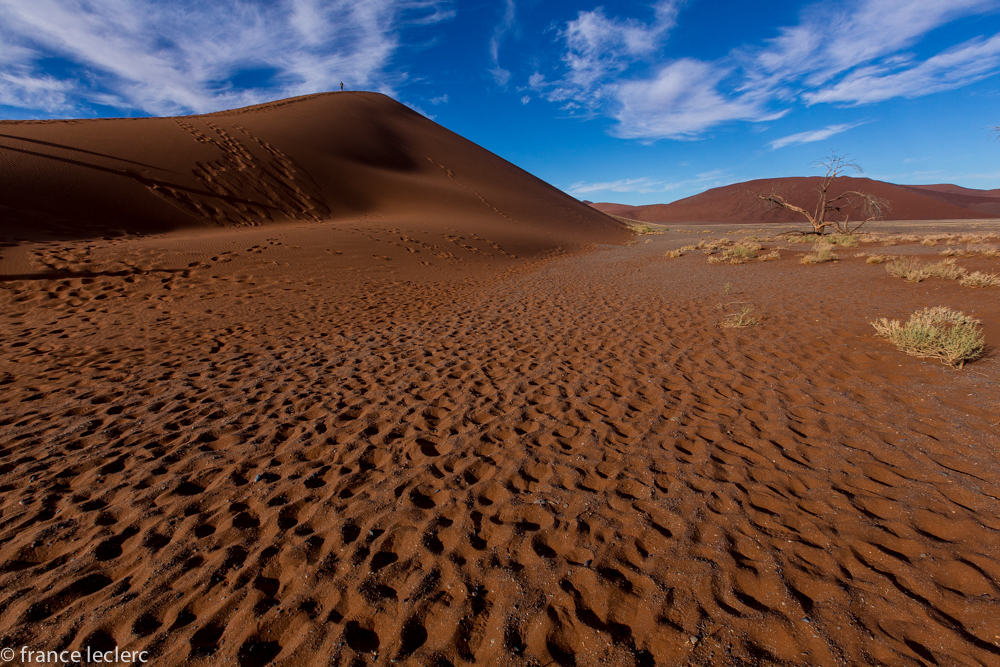 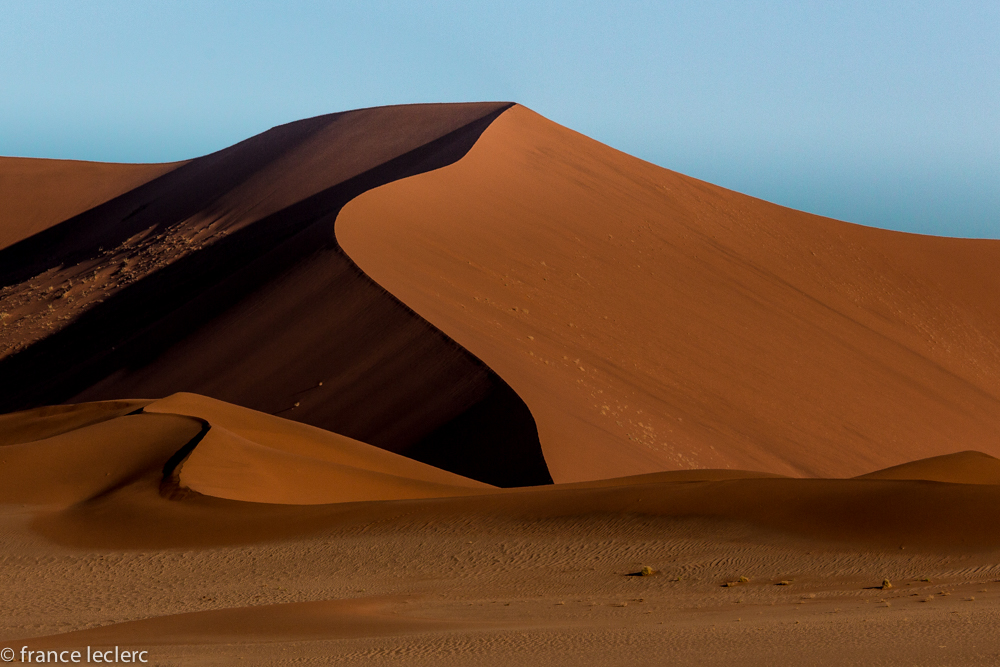 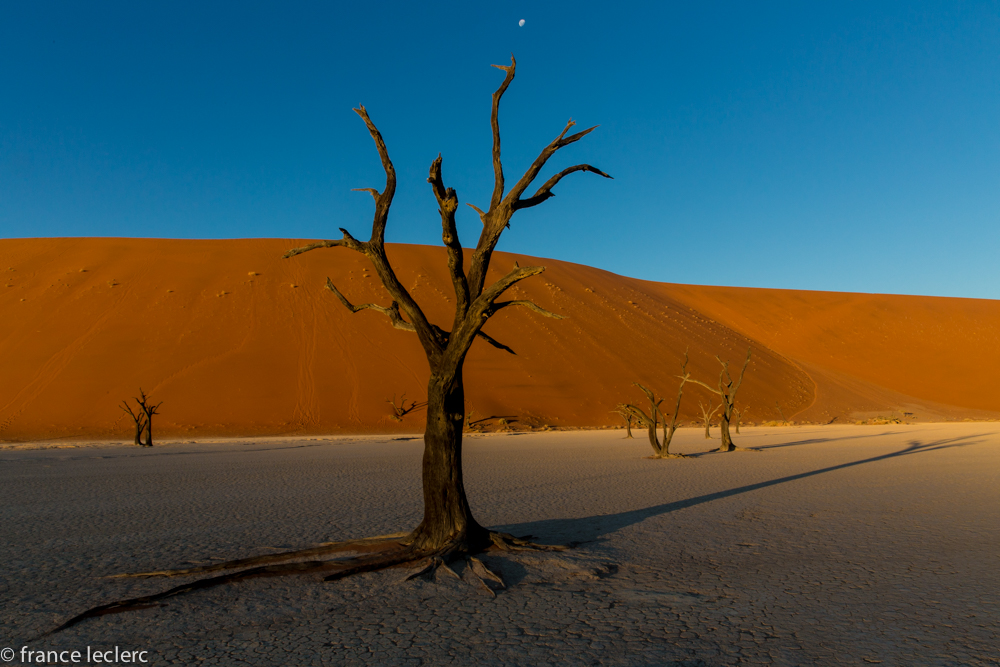 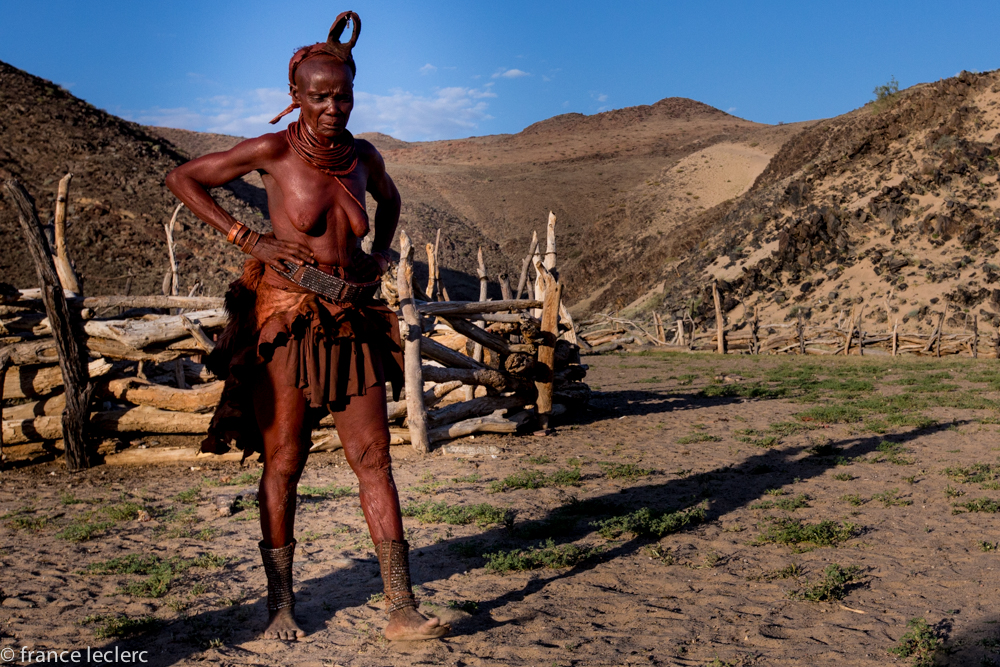 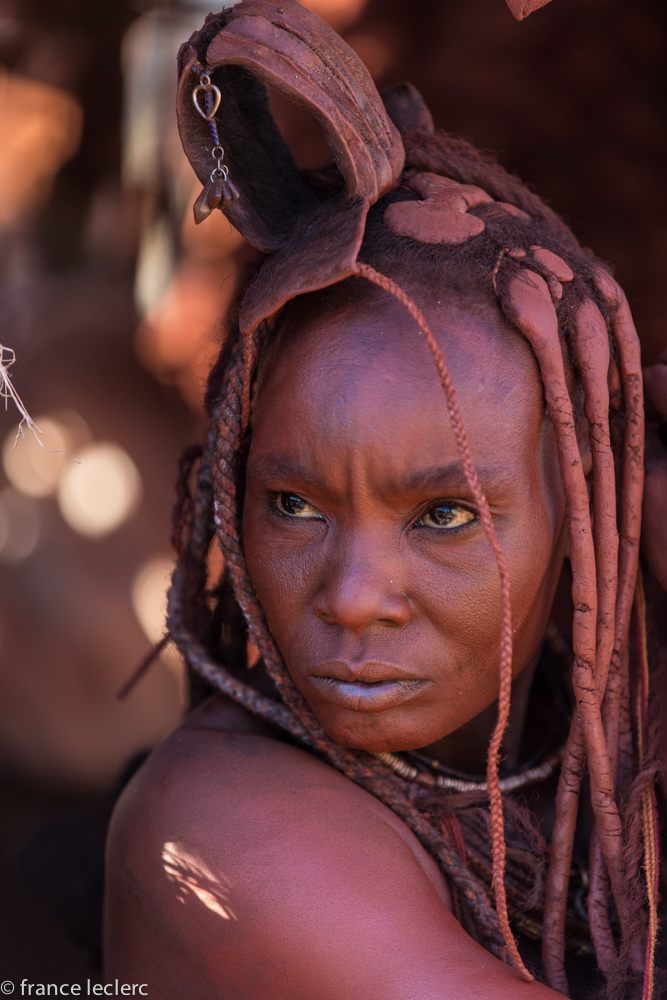 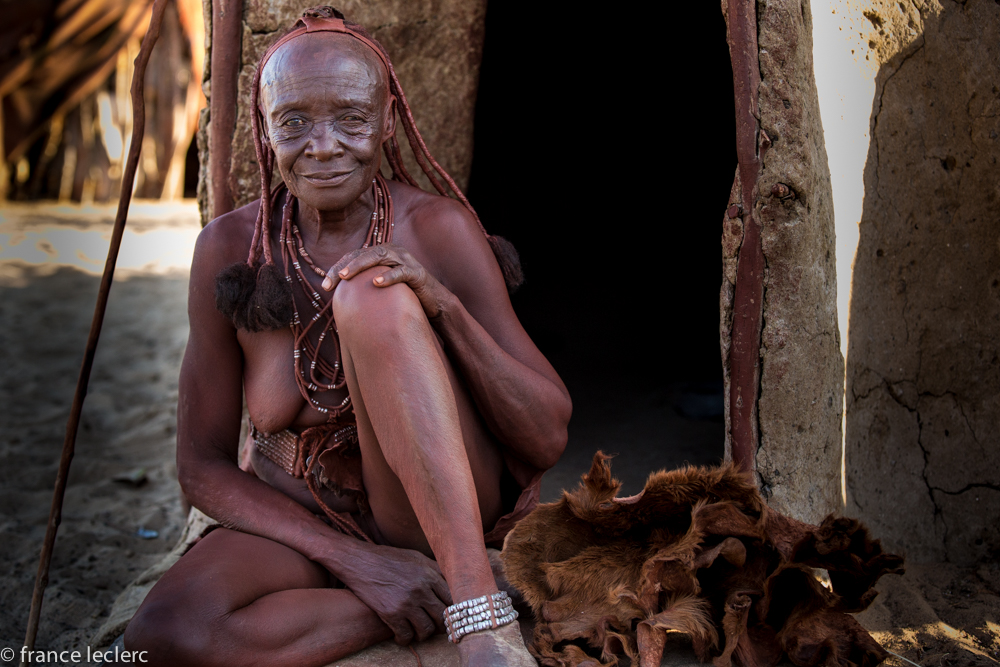 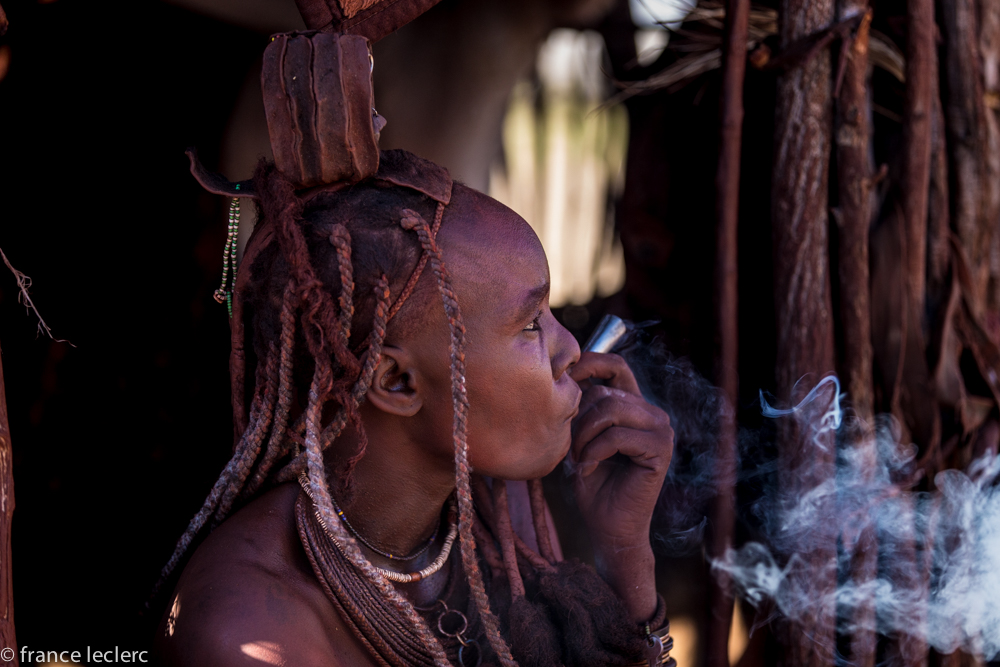 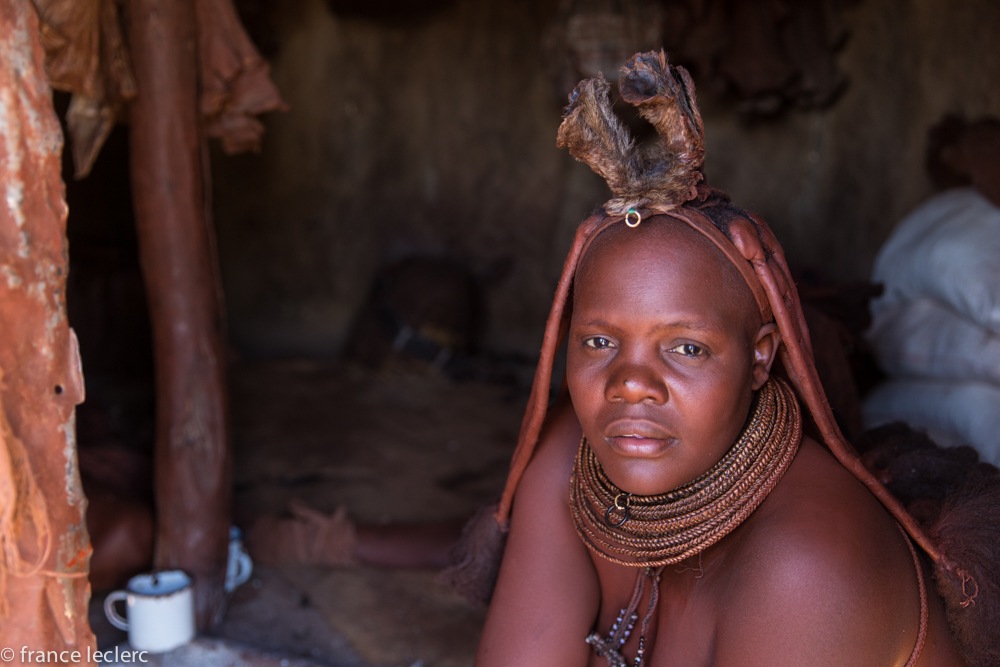 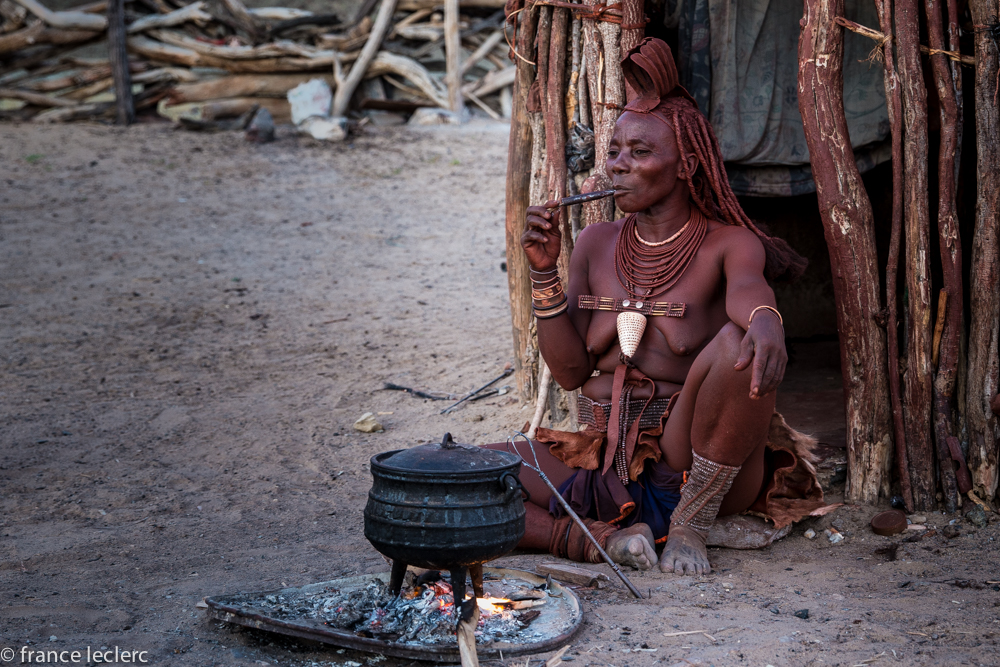 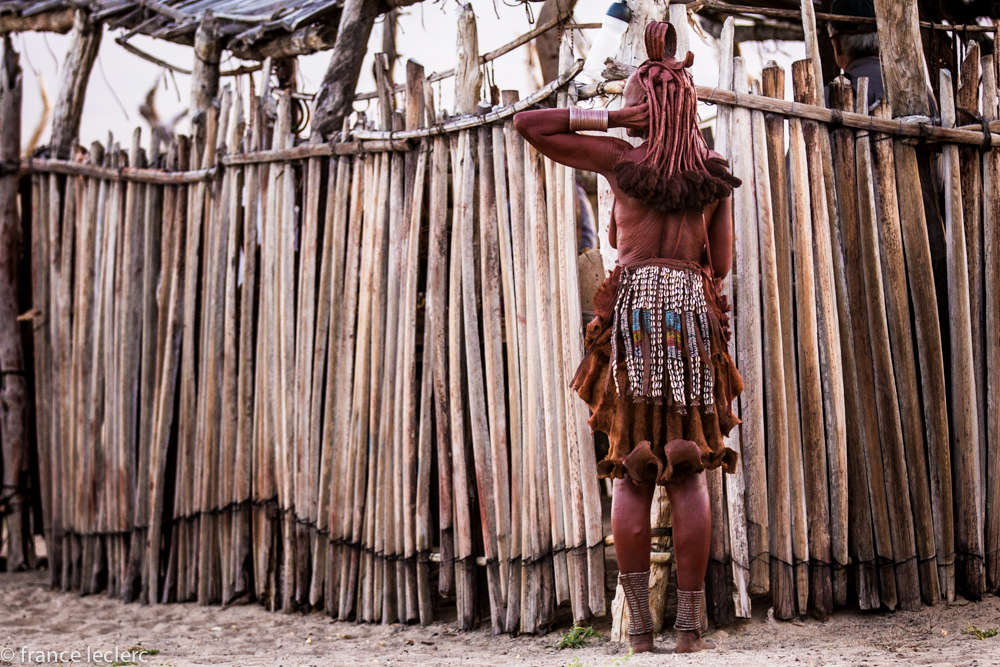 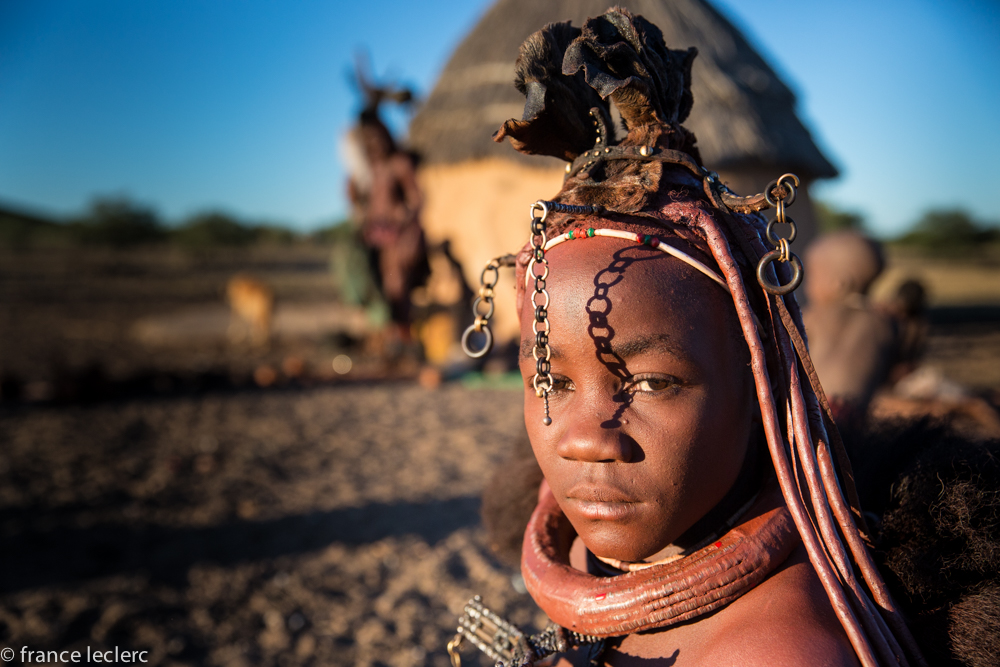 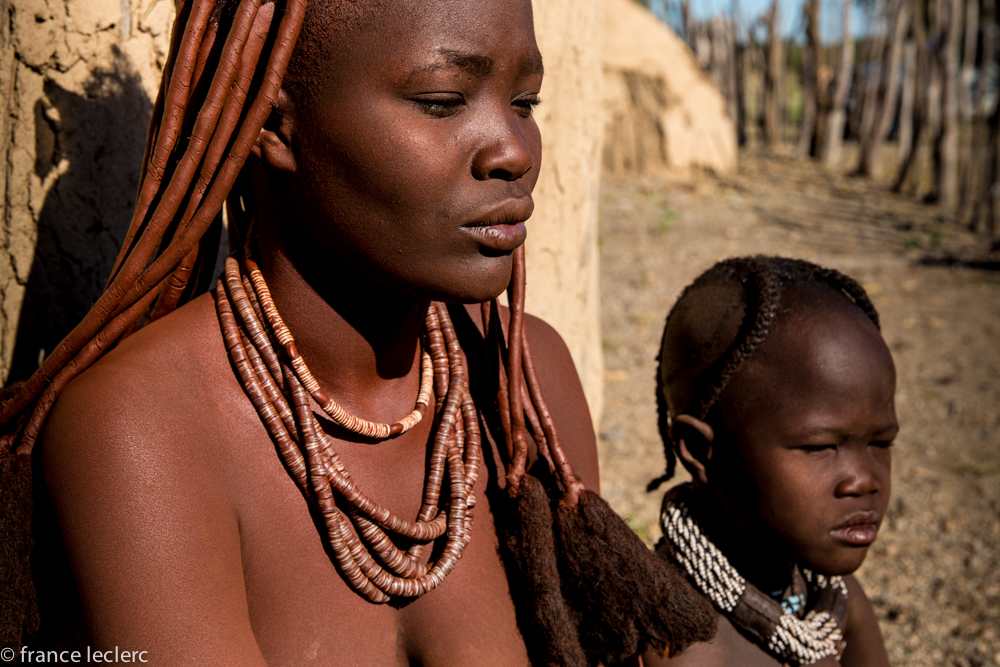 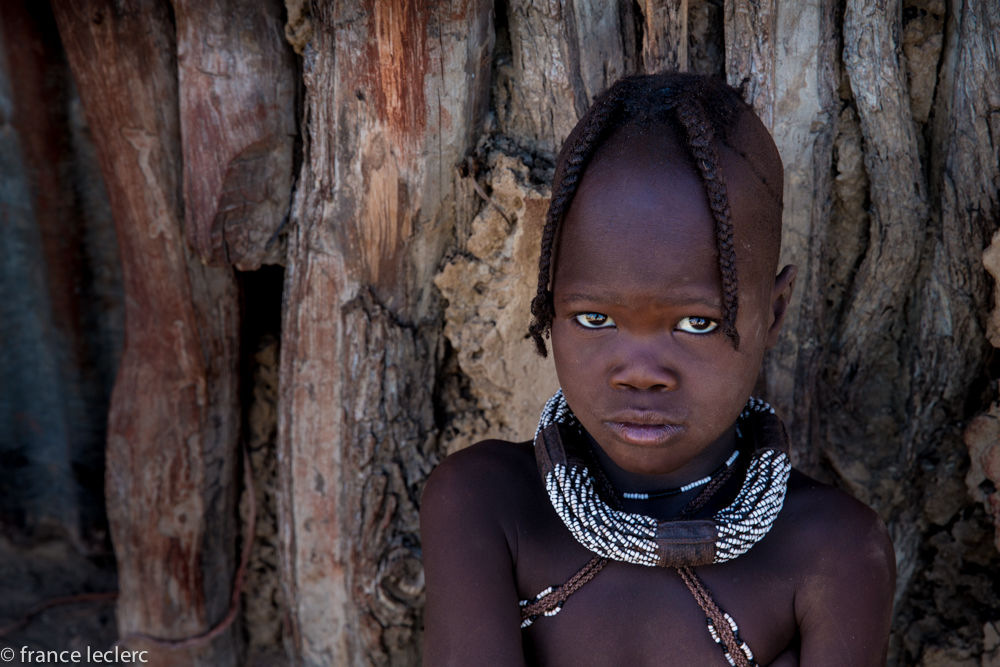 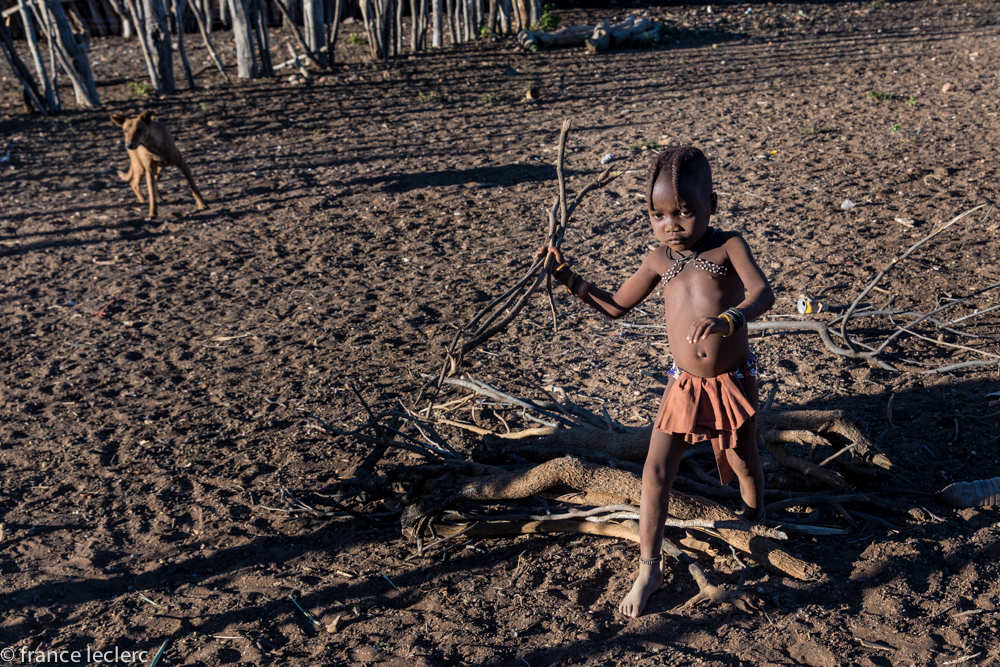 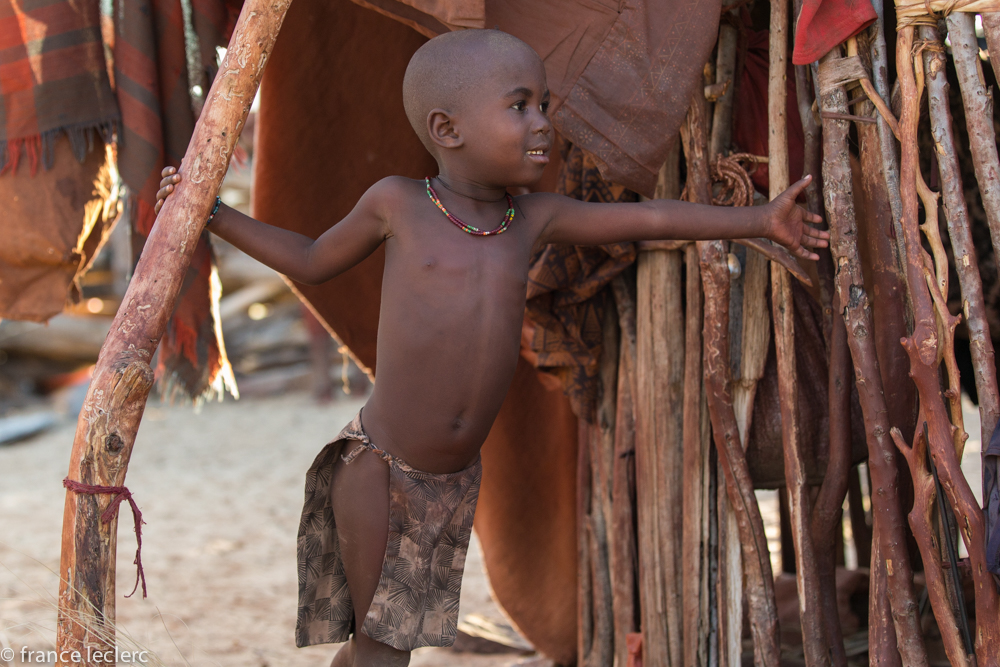 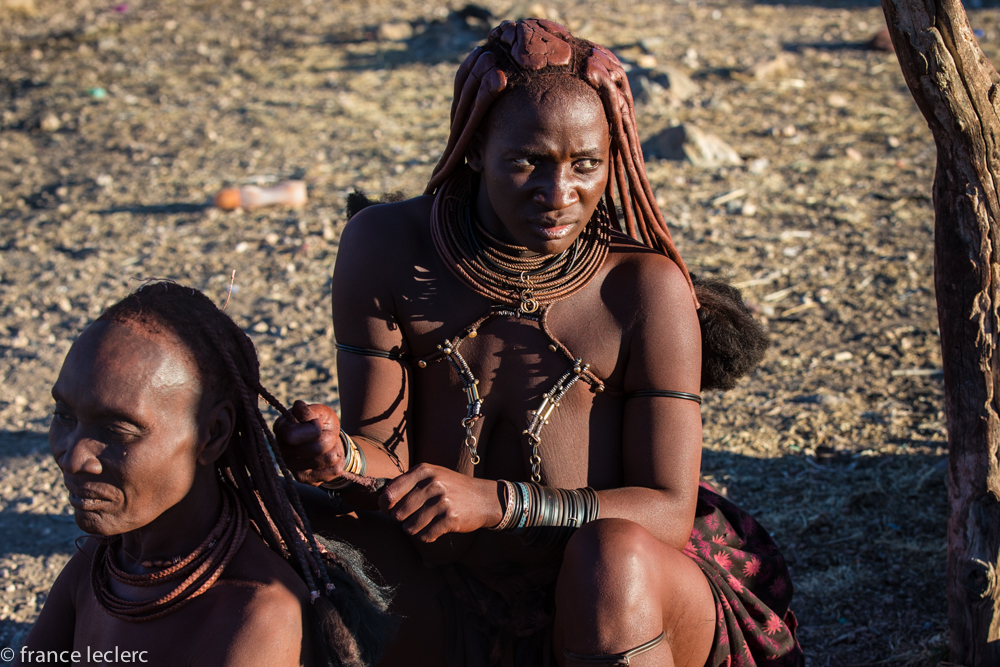 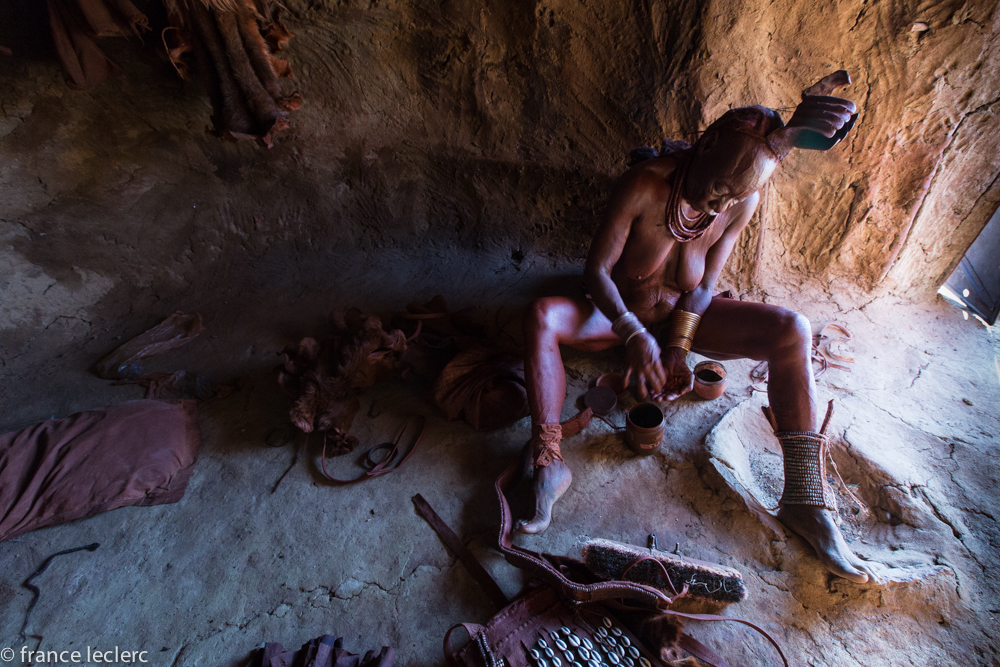 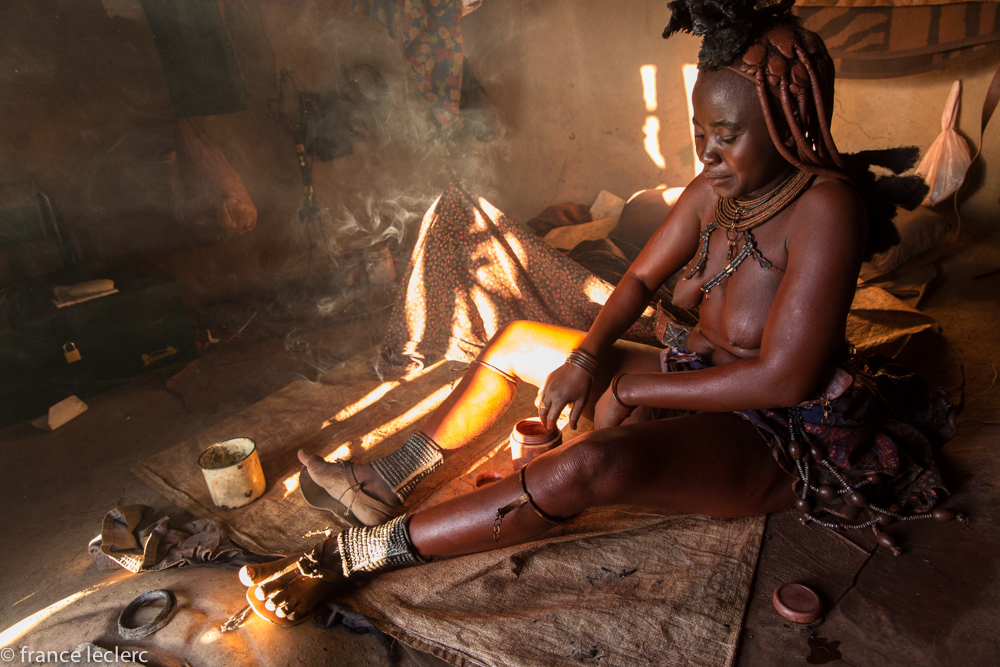 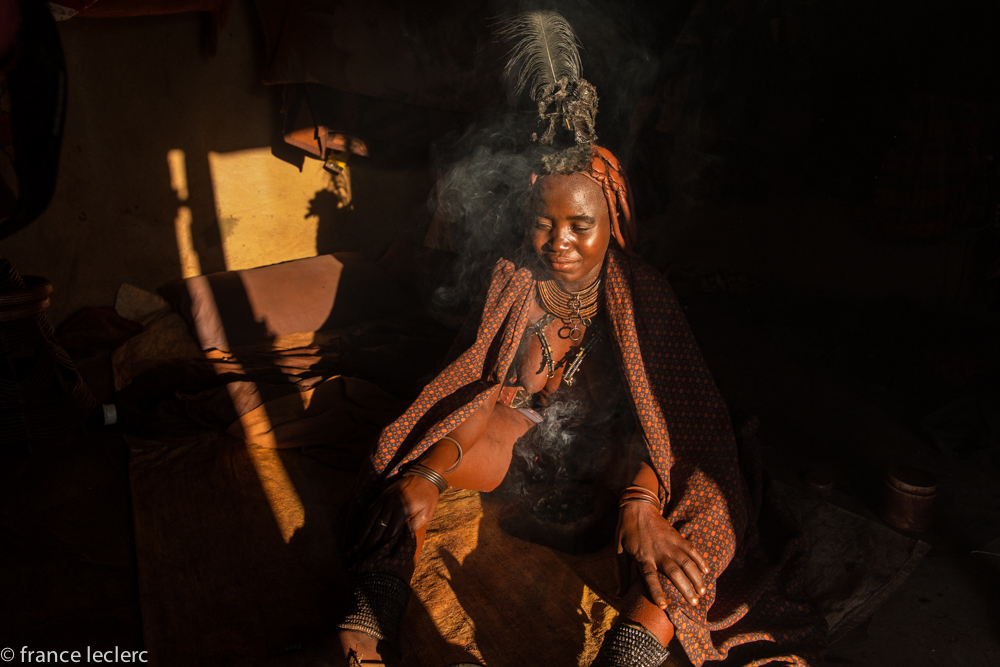 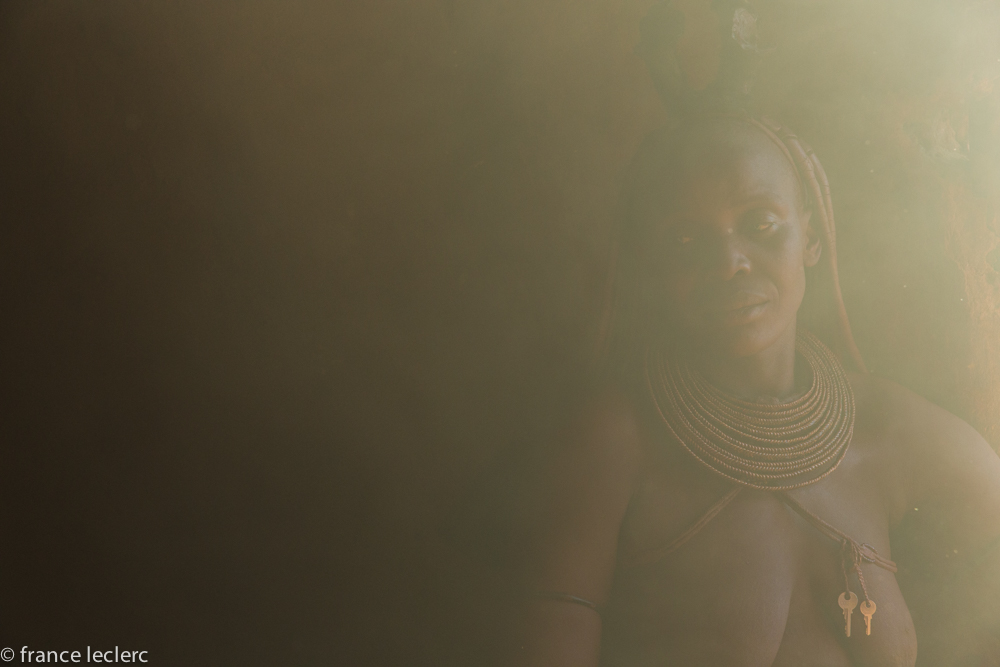 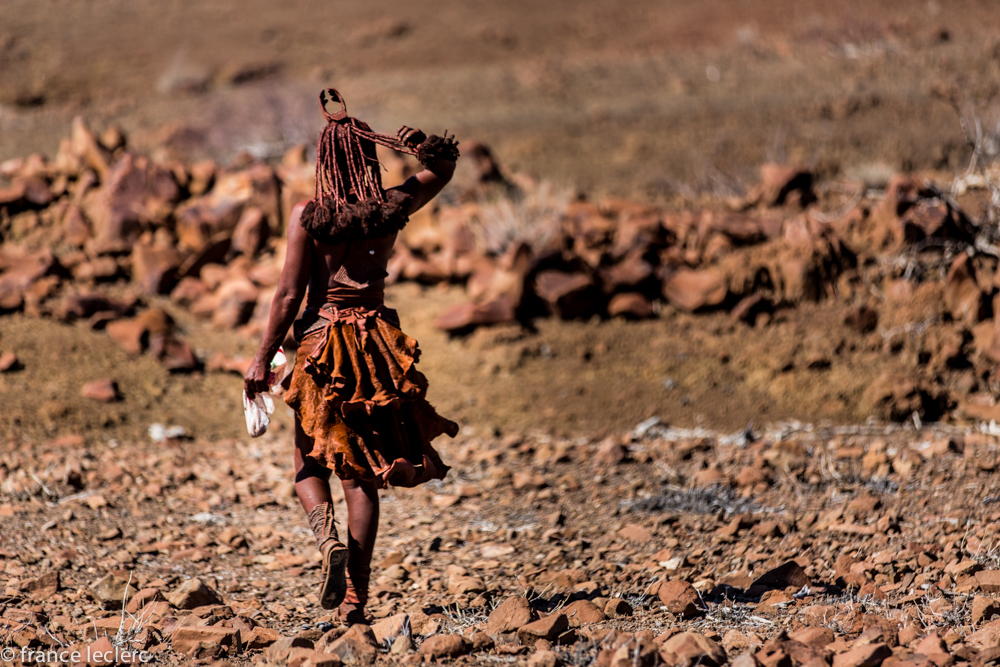