Inle Lake, the Venice of Myanmar 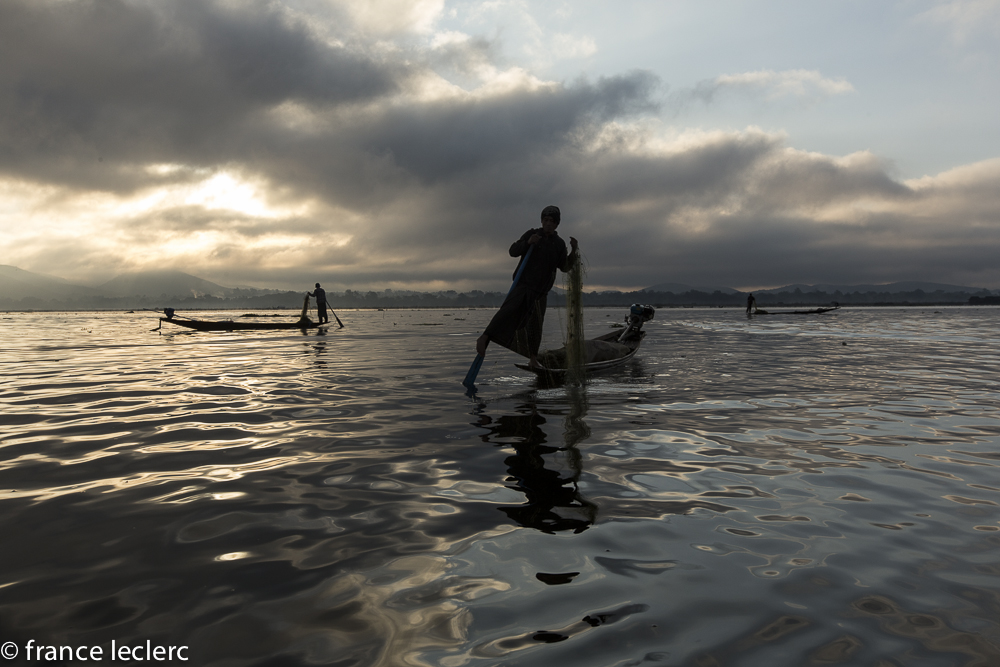 The last time I was in Myanmar was early 2011, just two months after Aung San Suu Kyi was released from house arrest.  So last December I was excited to have the chance to go back and see the changes brought about by the Burmese political reform.  I had heard there had been an influx of visitors and that some Burmese people had more freedom and resources than before.  Still I was quite surprised by the pace of changes some parts of the country have experienced.  From a visitor point-of-view, it is a new Myanmar.   No worries, the famous tourist sites such as the Shwedagon Pagoda, and the U-Bein bridge are still there (though there are plans to close the bridge for repair in a near future) but the larger cities of Yangon and Mandalay are certainly experiencing a rebirth.  Construction is booming, global brands are available, and whereas in prior trips I had a short commute from the airport to the hotel, this time I was stuck in a traffic jam for 90 minutes. I guess that is the price of progress and a few more amenities such as the cappuccino I drank at a terrace near the Scott market to try to fight my jet-lag induced sleepiness.

This is not to say that Myanmar is no longer a magical place, just that it is a different magical place than it once was, and, I hope, a better one for its people.  My main goal for this trip was to travel all the way north on the Chindwin River, an area that I had not visited before.  But I also decided to go for a short visit to Inle (Inlay) Lake, since I had enjoyed this area so much on an earlier visit.

Inle Lake is located in the heart of the Shan Plateau in the eastern part of Myanmar.  It is a beautiful highland lake, close to 15 miles long, that is inhabited by many different ethnic groups.  The gateway to the Lake is usually Nyaungshwe, an interesting stop on its own, from which one can travel by boat to the various villages.

The Inle Lake area is quite charming and unique.  Not unlike Venice, the locals live right on the water in high-stilted houses and use boats for transport.  The men are known for practicing a distinctive rowing style, which involves standing at the front of the boat on one leg and wrapping the other leg around the oar. This unique style allows them to be able to better see as they navigate a water surface covered by reeds and floating plants.  As far as I can tell, only the men practice this rowing style; the women seem to row in a more customary fashion.  The locals also farm right on the water by making floating vegetable beds using bunches of weeds secured to the lake bottom with bamboo poles. 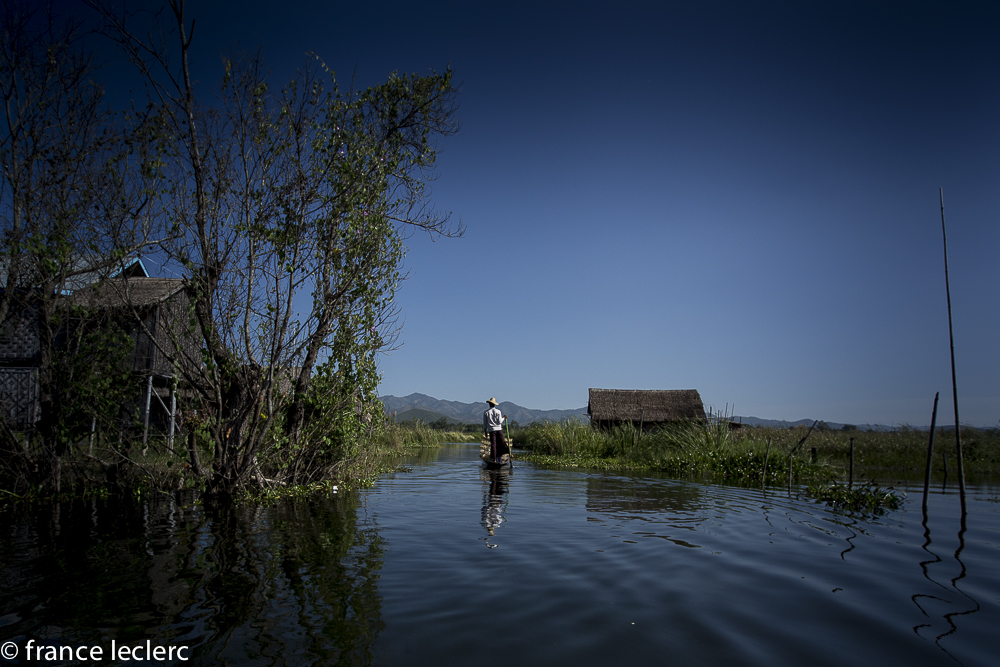 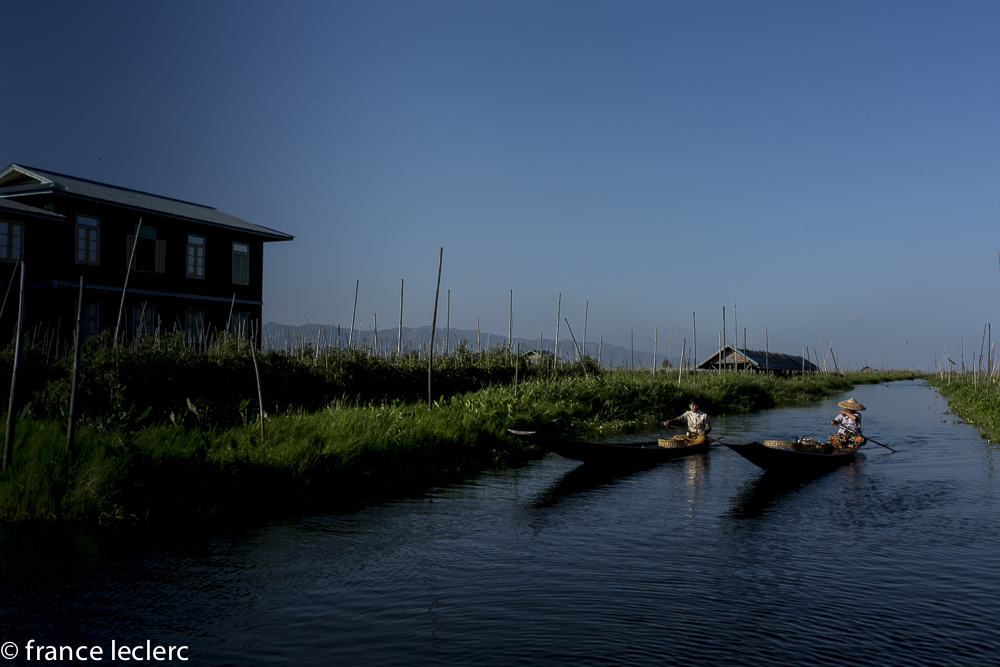 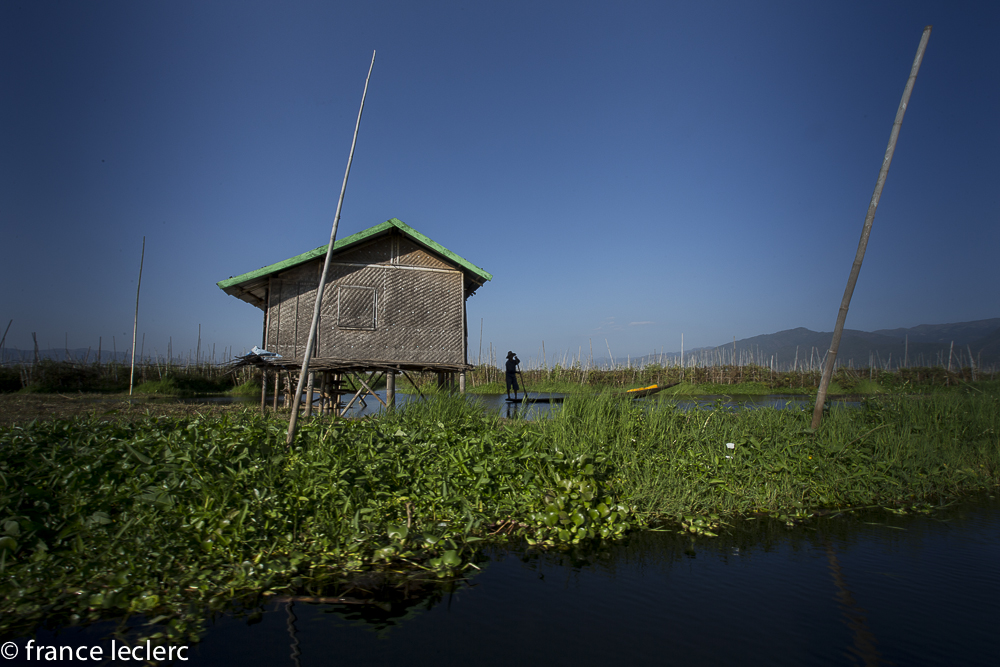 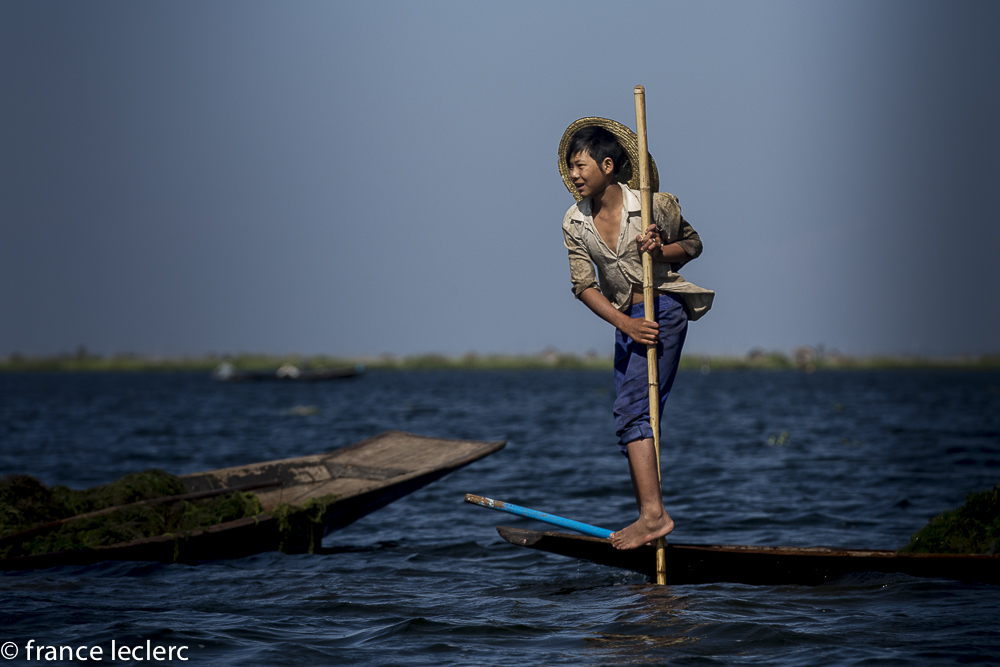 Another attraction of the area is the rotating market, each day held in a different village. It is an opportunity to see women from the Pa O tribe who live deeper inland but come to the market to sell their farm produce. The traditional clothing which many of them wear is indigo-dyed and is said to be a remnant of them having been enslaved over a thousand years ago.  Their colorful turban is supposedly mimicking the head of a dragon, a mythical character in Pa O culture. 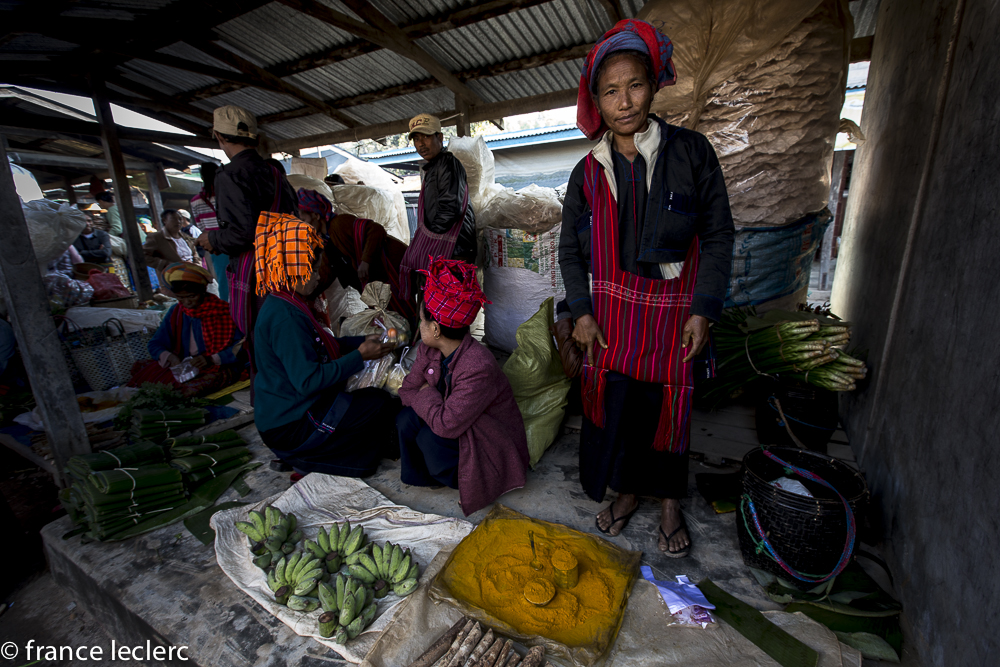 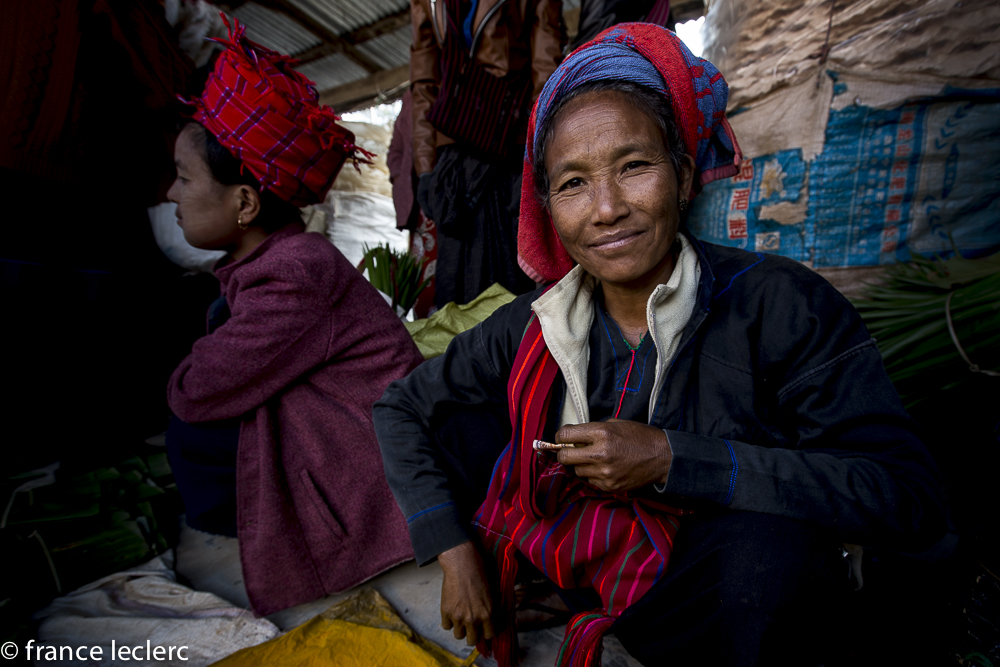 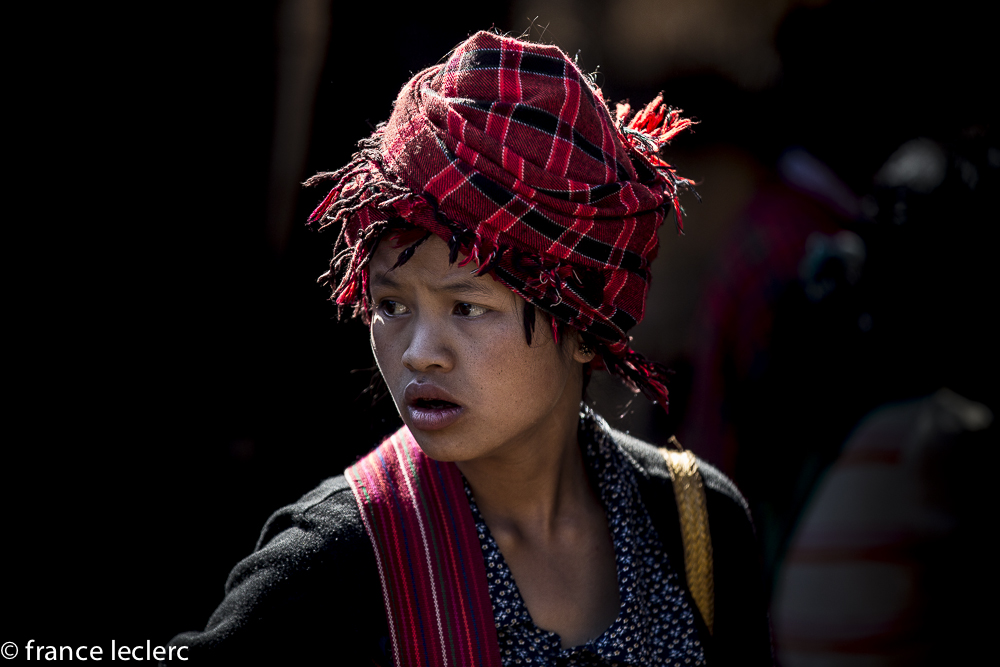 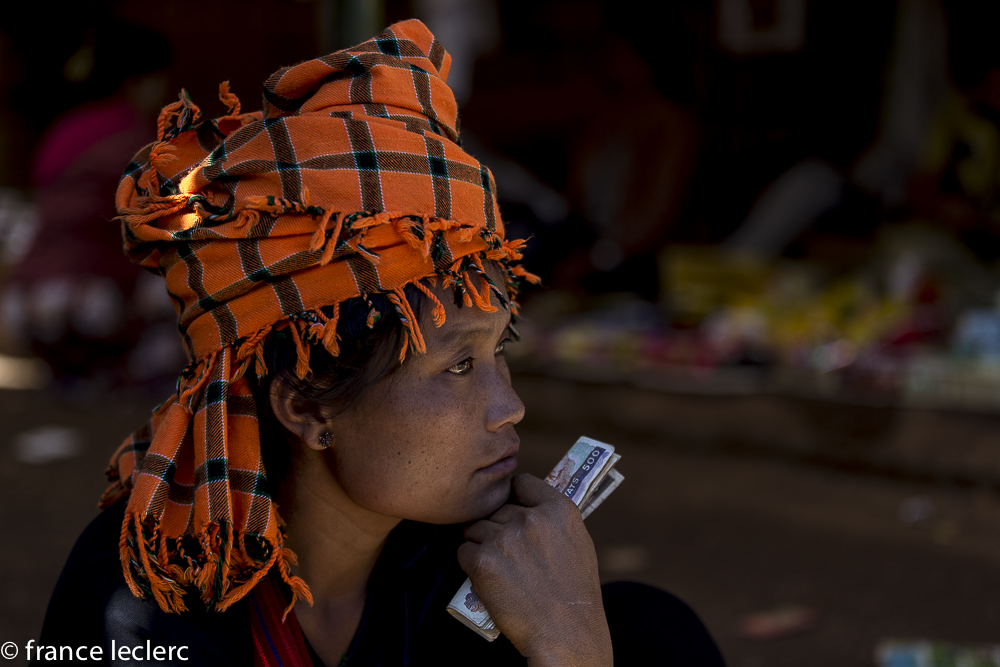 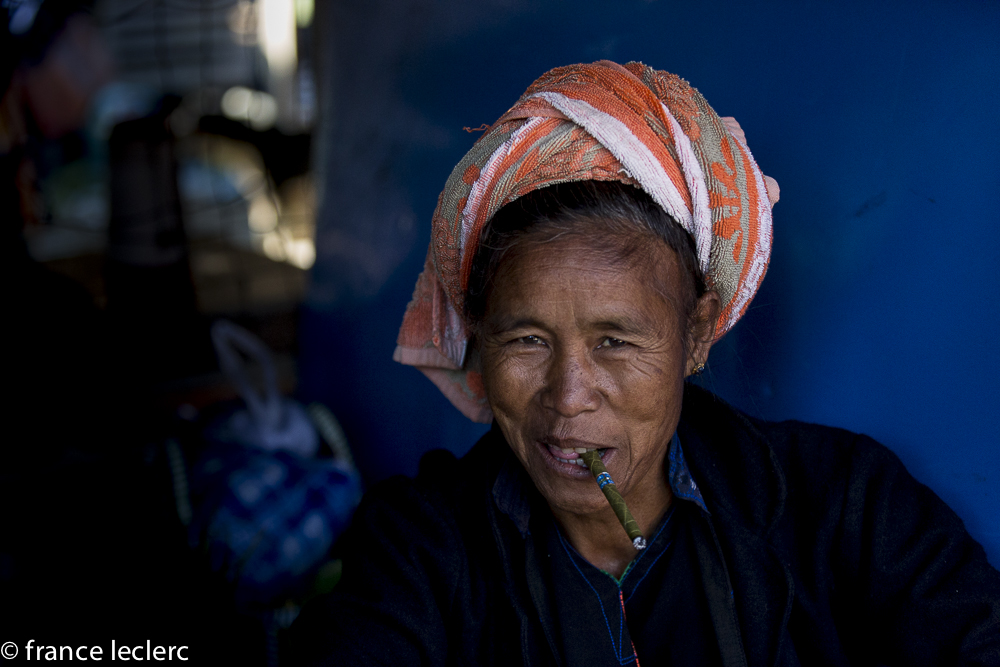 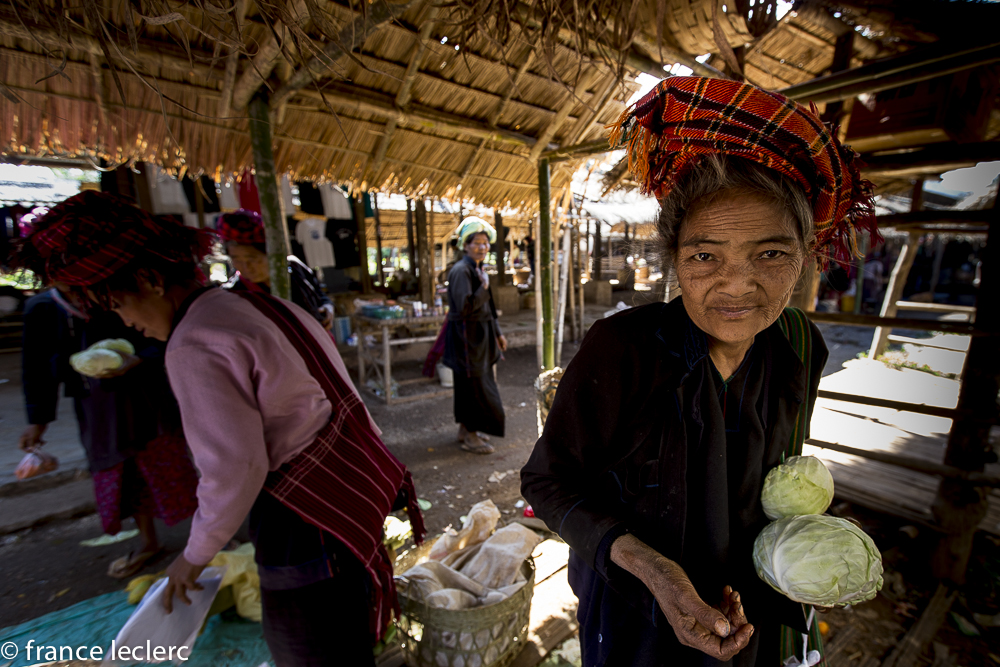 One thing that surprised me on this trip was the number of organized “workshops” trying to attract business from visitors. With the new influx of tourists, craft shops have now opened spaces where one can see the artisans (cheroot-making, weaving, blacksmith, jewelry…) and of course have the opportunity to bring home a “souvenir”.  I usually stay away from these places, but I was enticed to take a peek at a new center where some of the weaving is done using a thread made from the stems of lotus flowers, a new concept to me. At this center, a number of women are weaving this most unique fabric as well as more typical ones such as silk and cotton. 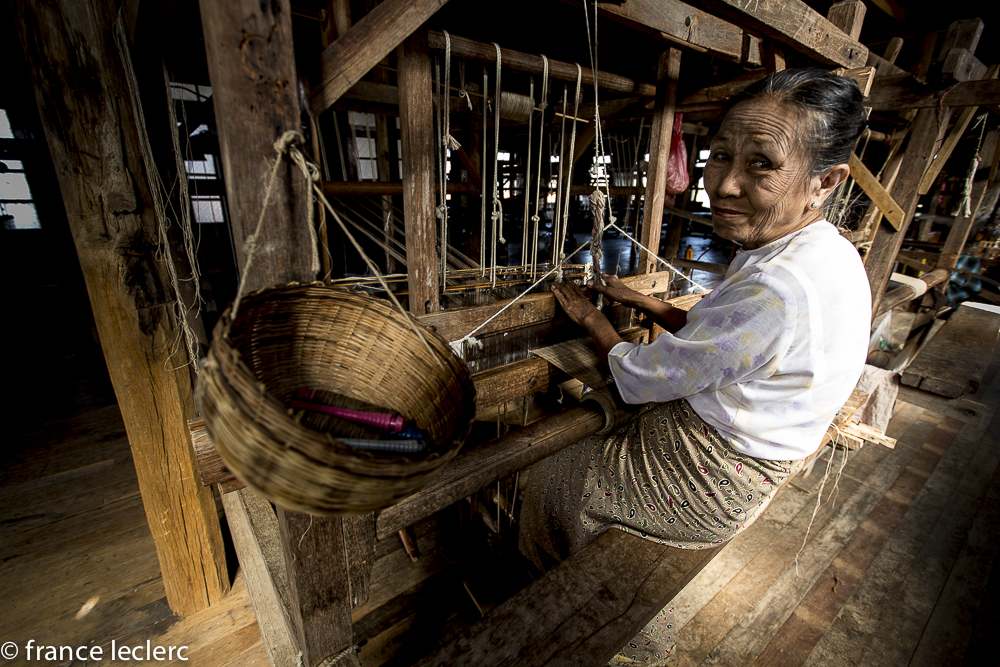 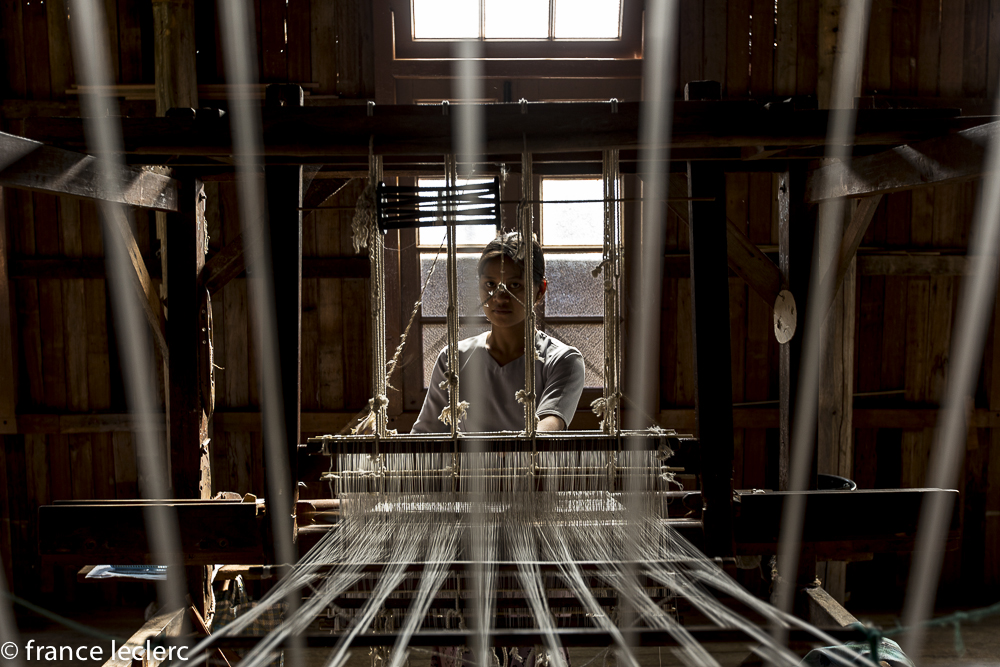 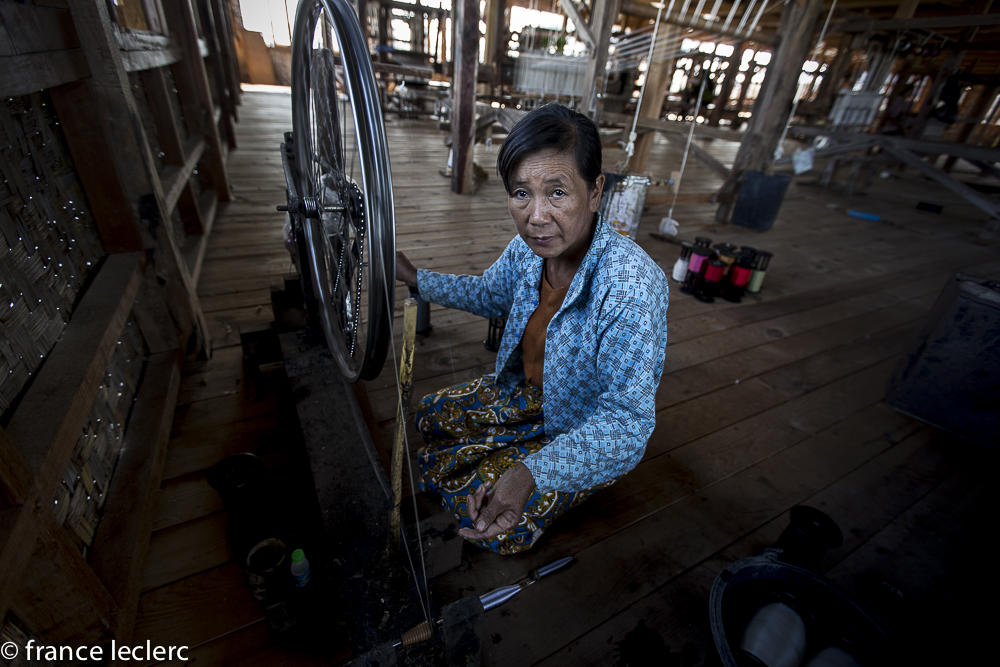 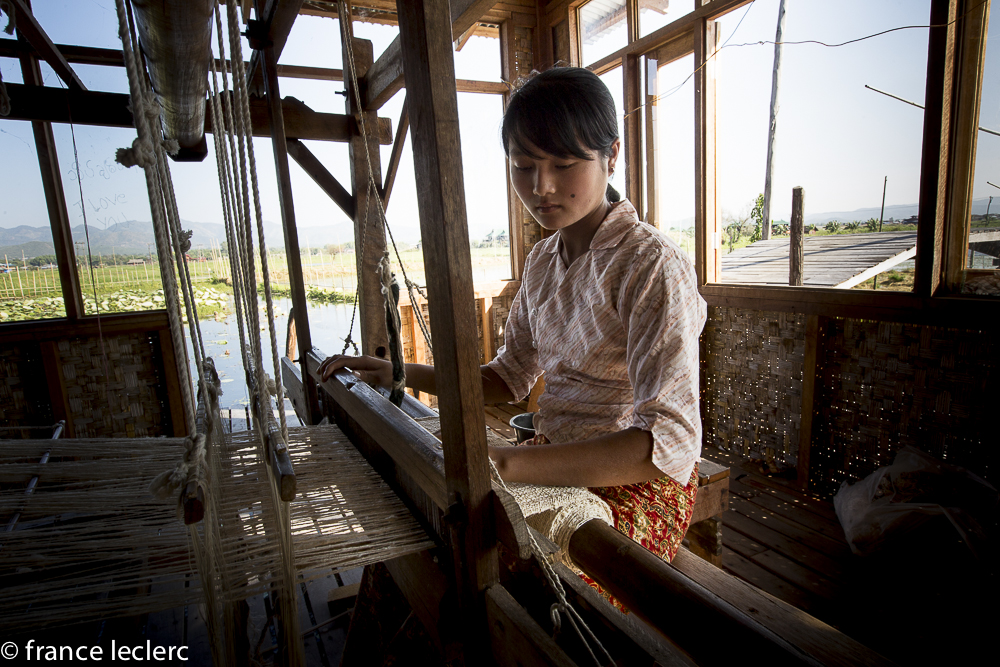 In one smaller weaving shop, one can visit with the few remaining Padaung “long-neck” women of the area who demonstrate the traditional way of weaving.  The number of women wearing the neck rings has apparently steadily decreased in Burma because, beginning in the early 1960s, the Burmese military government tried to stop the practice, and as a result, most of the Padaung fled to a refugee camp in Thailand. I had met these Padaung women at the weaving shop on a previous visit and was pleased to see them again. Being in their presence, however, always generates a mixed emotional reaction. On the one hand, one wishes that no women would have to suffer through such a practice; on the other hand, if it is their culture, shouldn’t they be allowed to follow their traditions if they so desired?  This is obviously not an easy question, for more on this issue see this National Geographic video (http://www.youtube.com/watch?v=0FME1At3vmI.) 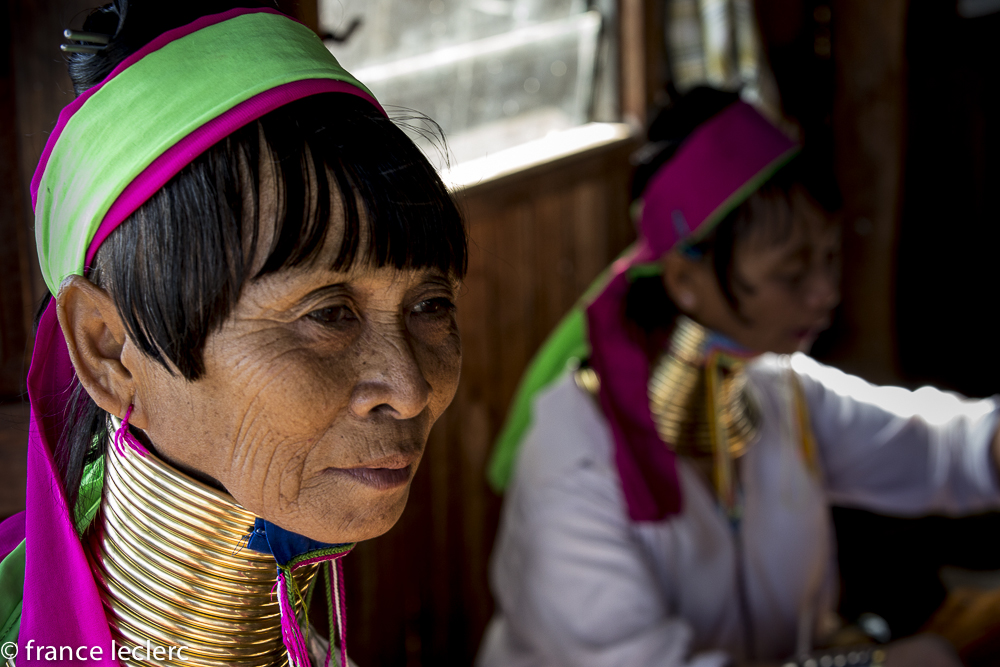 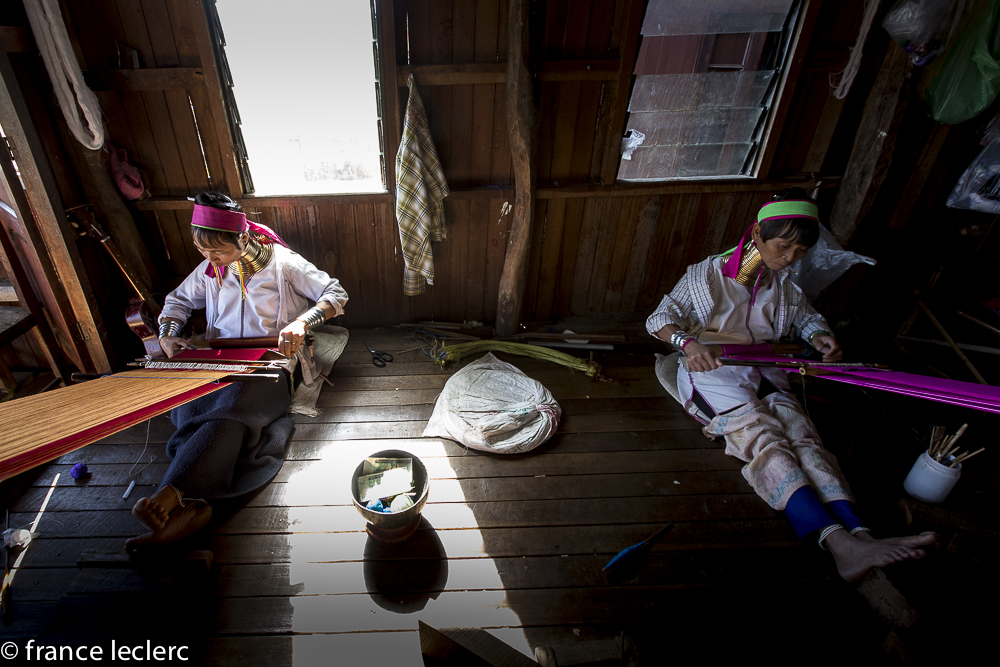 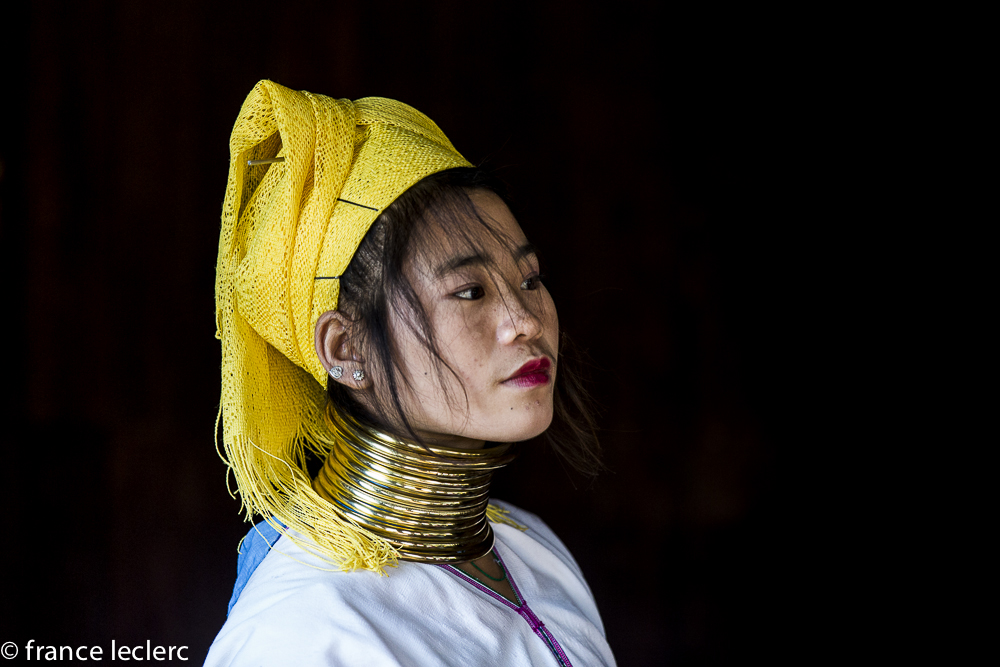 One of the images most strongly associated with the Inle Lake area is of a one-leg rower fishing with a tall woven bamboo basket with a flared bottom.  The fishermen would push the basket downwards with one foot and a pole inserted through the top of the basket would disturb the fish, which would then swim upward and be trapped. The basket fishing tradition, however, seems to be a thing of the past.  Visitors can still see it, as a number of local fishermen will happily demonstrate the technique as they did for me. However the working fishermen now mostly use a net, which is more efficient for them. 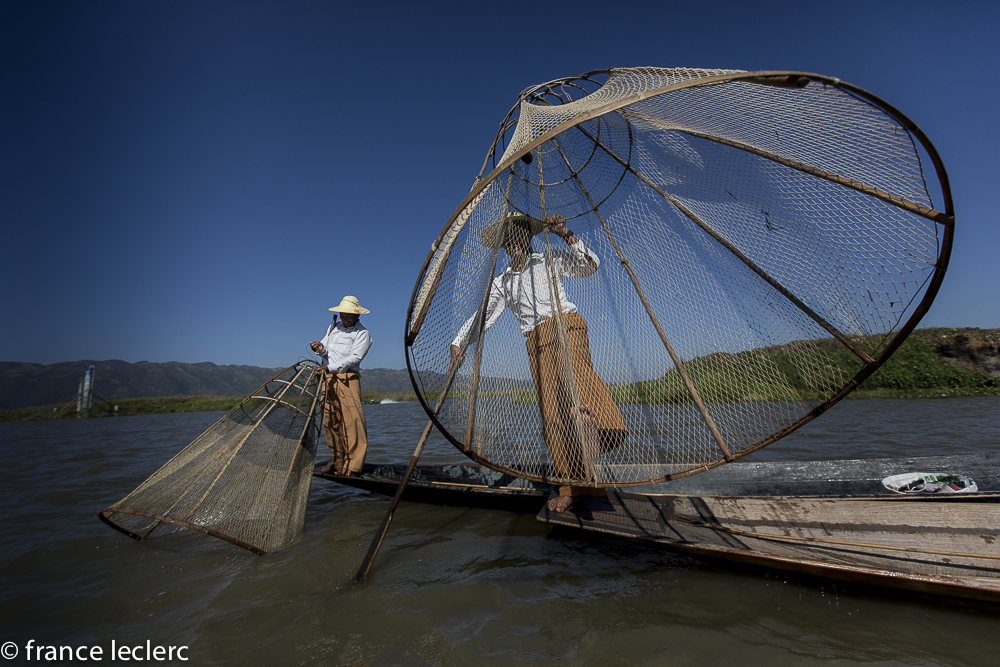 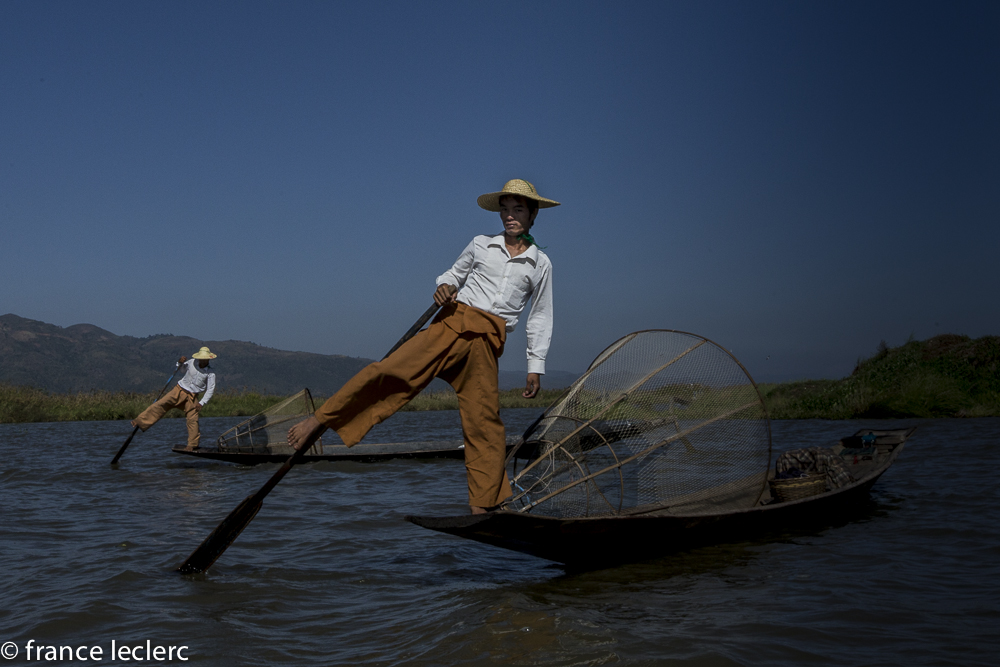 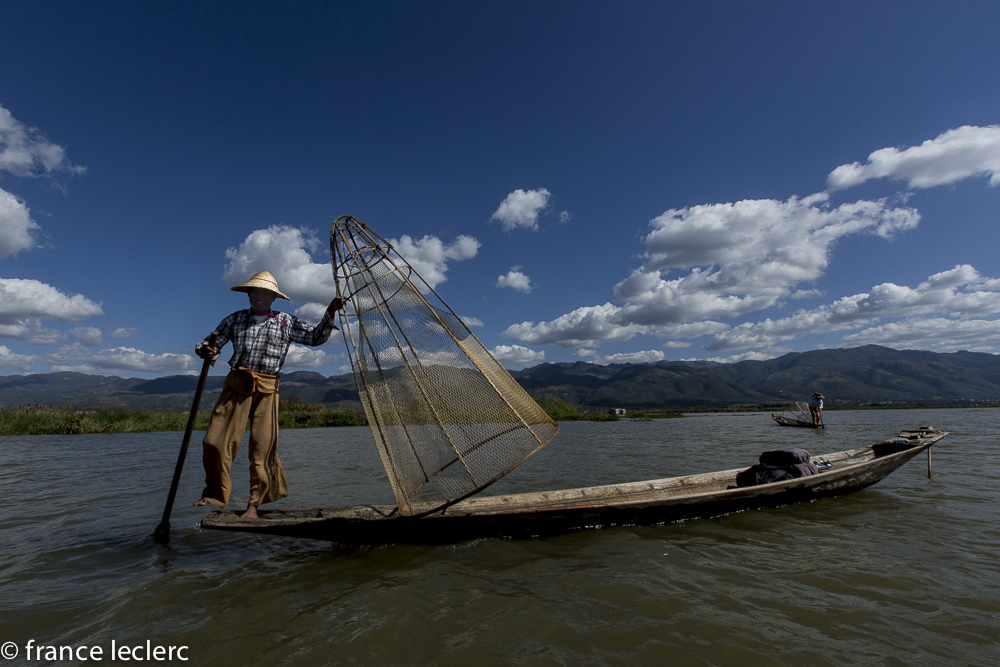 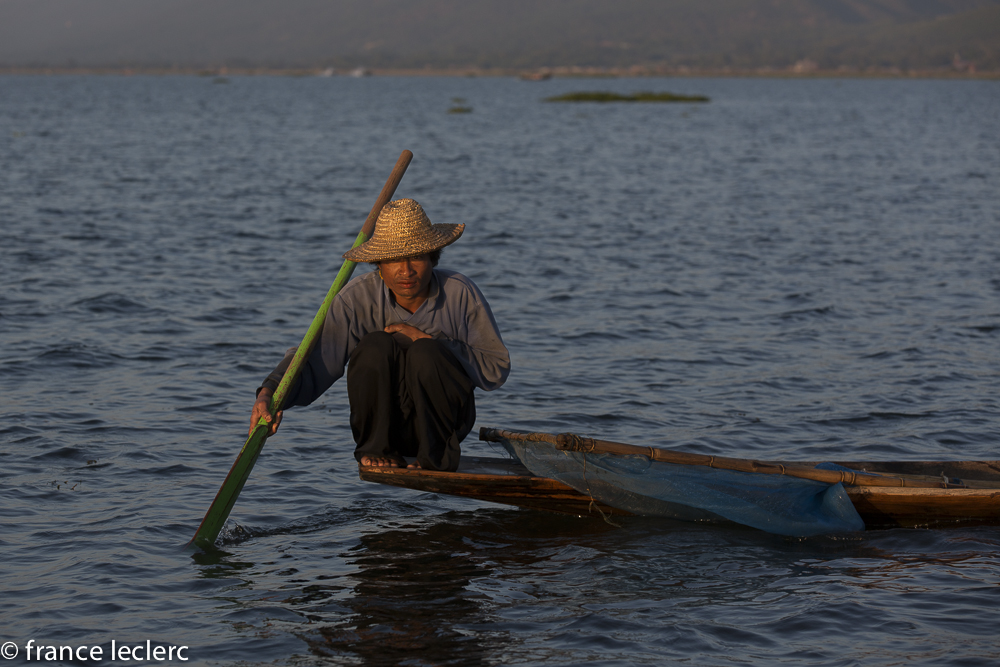 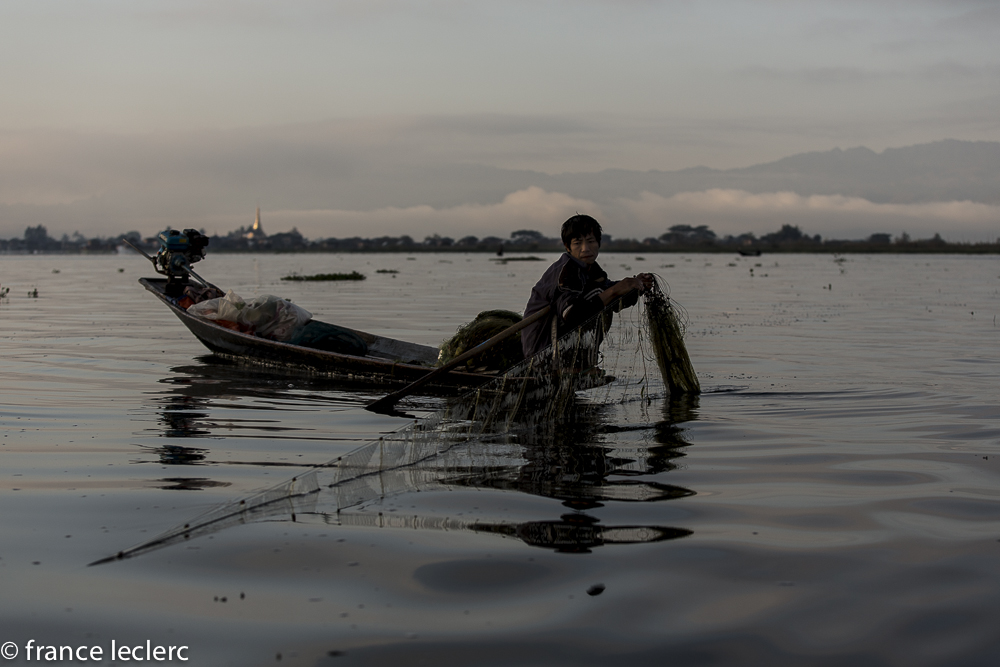 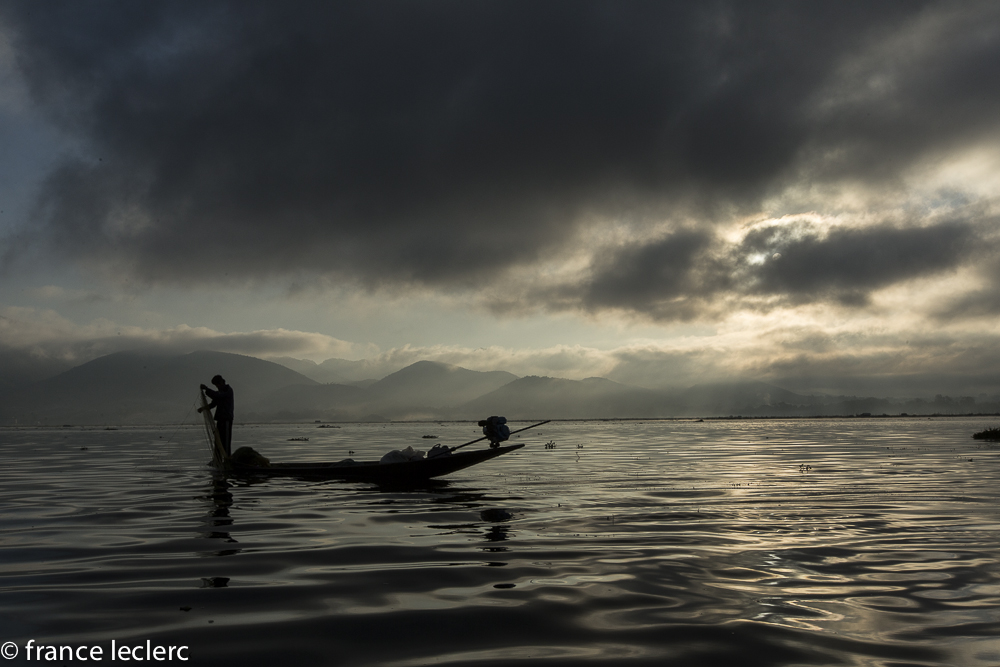 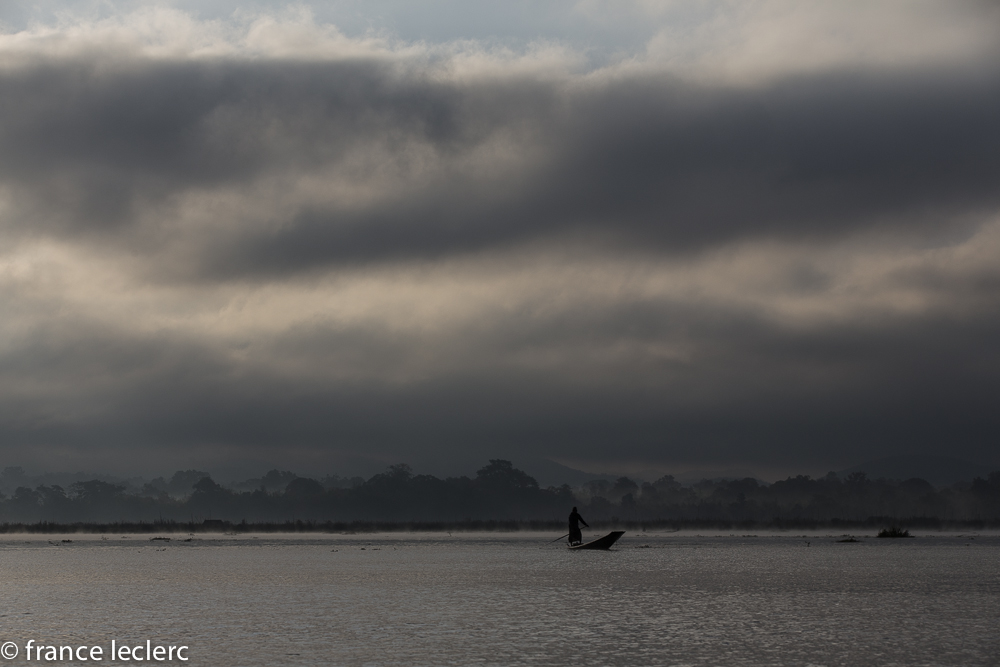 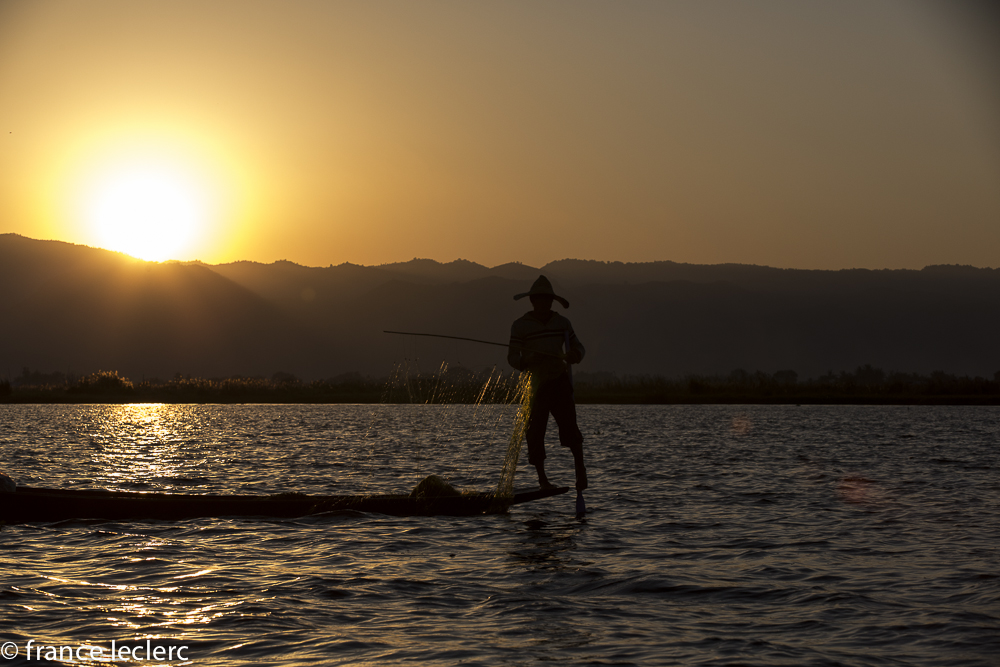 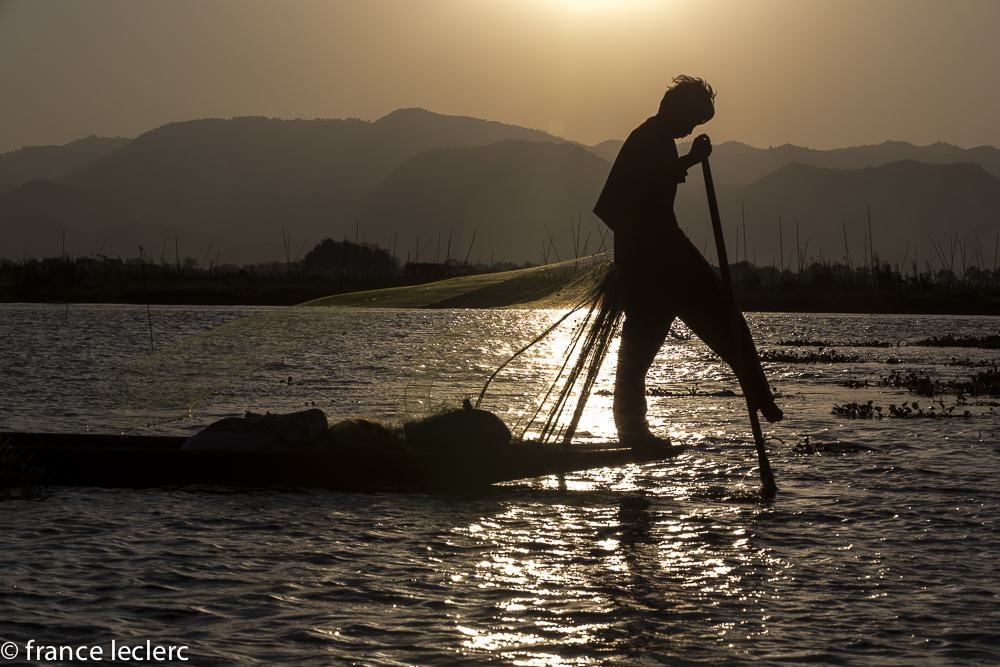 Next on the Chindwin River,

Facebook-f Twitter Instagram
PrevPreviousFang-Od, a Tattoo Celebrity in Buscalan
NextIn the Midst of a Mist in Myanmar.Next