Fang-Od, a Tattoo Celebrity in Buscalan 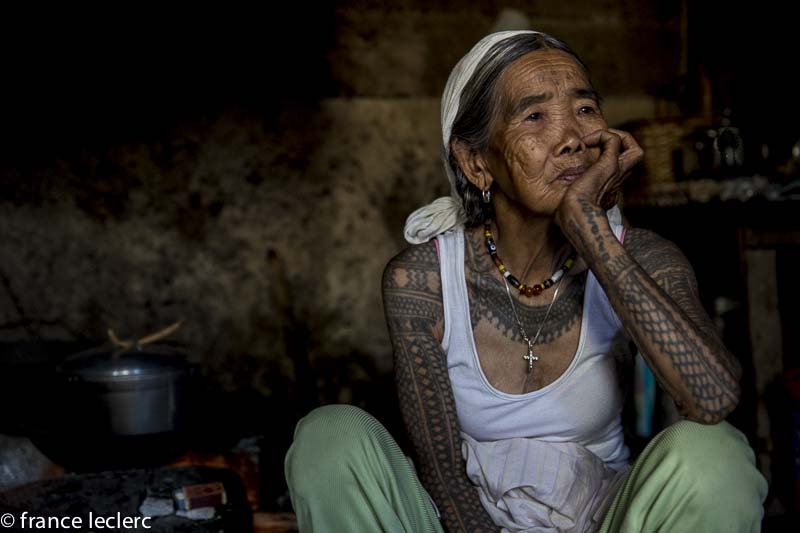 As I mentioned in my previous post, after spending some time in Lubuagan, a town in the Cordillera, we continued to a small Kalinga village called Buscalan.  No small feat to get there, as we had to ride a bus for 3 hours (with me sitting on top of it, allegedly for a better view), a motorcycle on a dirt road for 20 minutes and finally a rigorous hike of 2 hours (at my pace at least).  It is a long journey but a very scenic one, navigating peaks and gorges and surrounded by magnificent emerald-rice terraces.  Buscalan is a small village of 800 inhabitants and one celebrity, Ms. Fang-Od (Whang-Od) the tattoo artist.

Tattooing is an art form closely linked to the Kalinga culture.  In the old days, both men and women used to get extensive tattoos; men would get tattooed to convey their prowess as headhunters whereas women would beautify themselves with refined tattoos looking almost like delicate laces.  Today, men have abandoned the practice (let’s hope they abandoned head hunting too) and now it is mostly older women who still sport the traditional Kalinga tattoo.  In Buscalan, Fang-Od, incredibly energetic, beautiful, and spirited 93-year-old tries to keep the art form alive. She acquired real notoriety in the tattooing world when she was featured in 2010 in the “Tattoo Hunter” show on Discovery Channel.  Since then Fang-Od gets many visitors ready to make a long journey to get her very special brand of tattooing.

So we visited with Fang-Od for a few days hoping she would get a customer (I was eager to see Fang-Od practicing her craft but not eager enough to volunteer).  We also visited with women in the village that had been adorned by Fang-Od.  When she is not busy tattooing, Fang-Od goes about her life much like the other people in the village, cooking, cleaning, feeding the animals.  Finally, a young Filipino arrived, after a 17-hour journey from Manila and Fang-Od got her tools ready.  As a needle, she uses a thorn from a local citrus tree that she attaches to a narrow piece a bamboo which she then strikes with a mallet.  Her “ink” is also homemade as she uses the soot collected from her cooking pans.  After some discussion, (the young man already had a tattoo on his leg and wanted Fang-Od to do hers right next to the existing one, an idea that Fang-Od resisted as she wanted to be respectful of the tattoo already there), Fang-Od got to work and for a couple of hours, we watched and listened to the repetitive sound of her methodically hitting the bamboo. The steadiness of her hands and the sharpness of her vision are remarkable for someone of that age (or any age for that matter).  One wonders what her secret is.  Another mystery is that she never married and does not have children, a rarity in the Kalinga tribe. 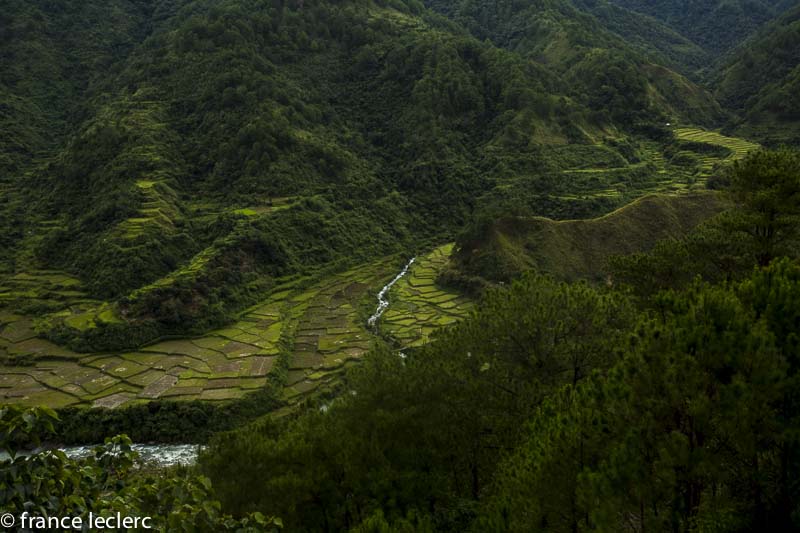 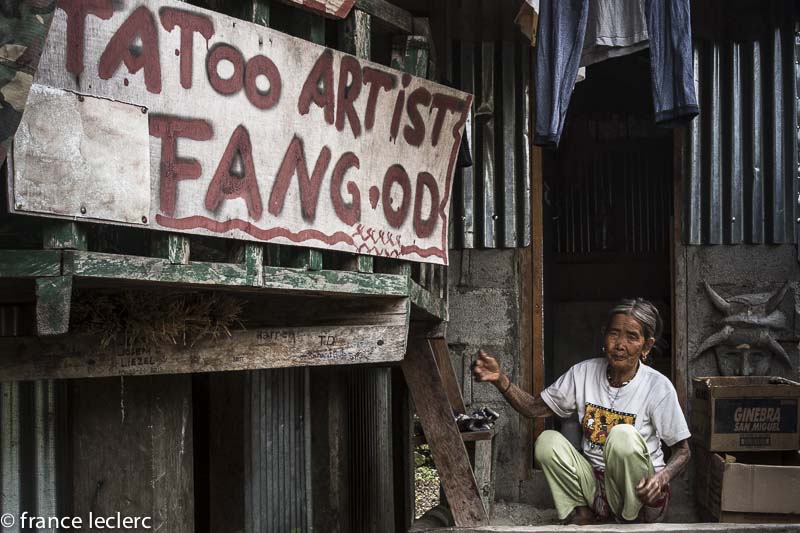 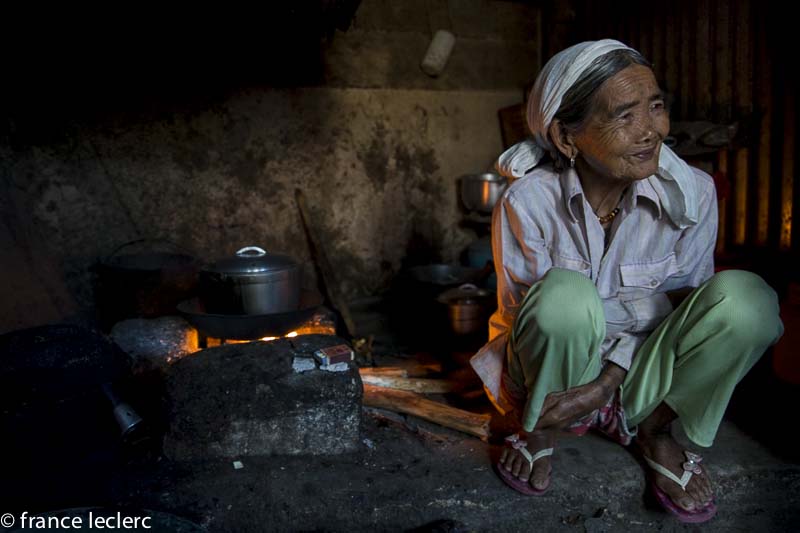 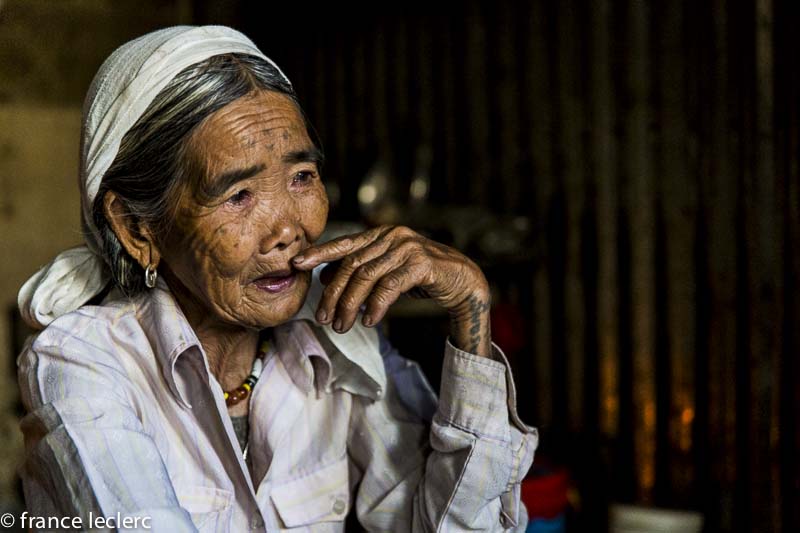 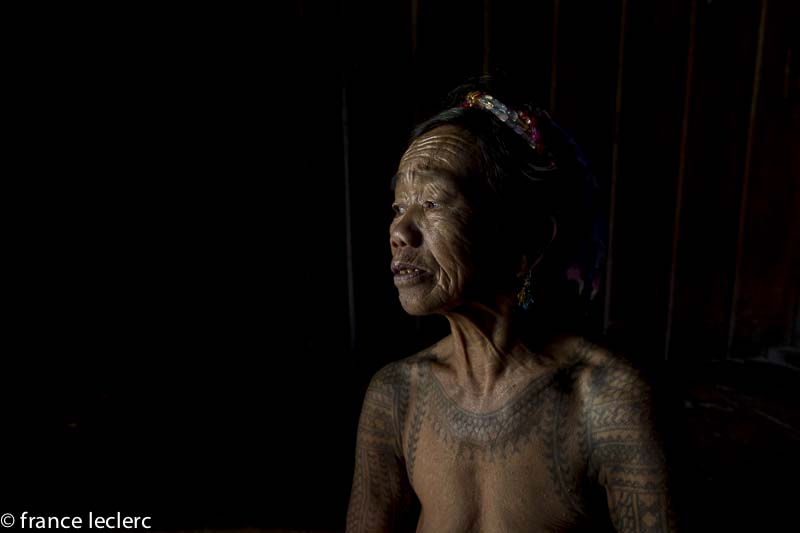 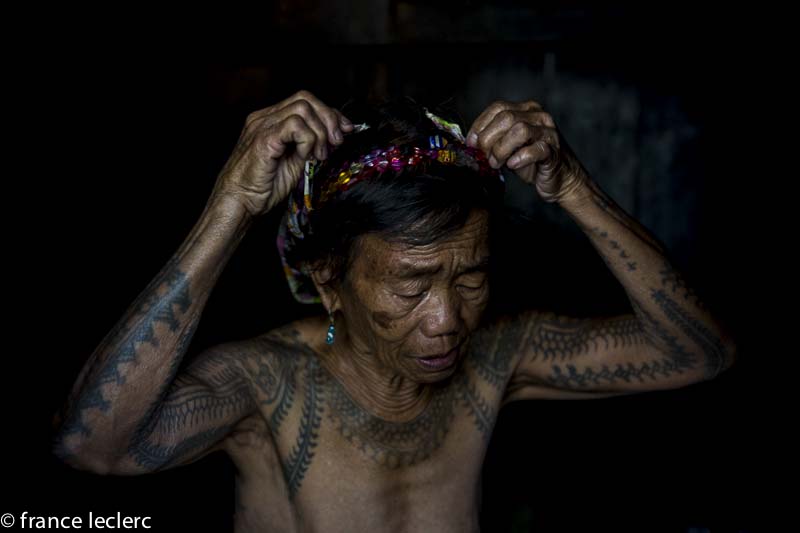 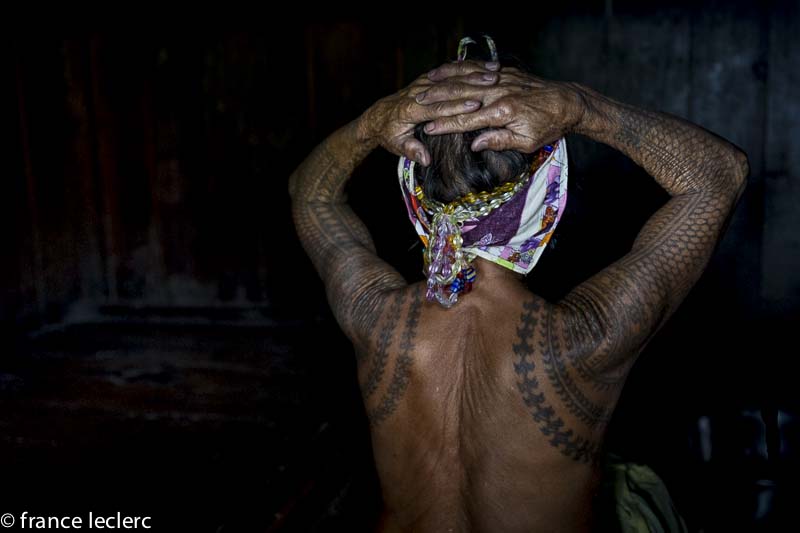 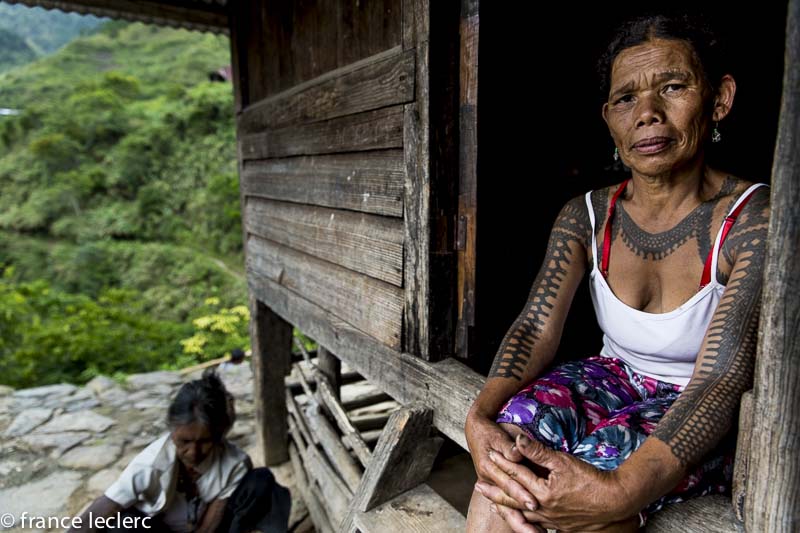 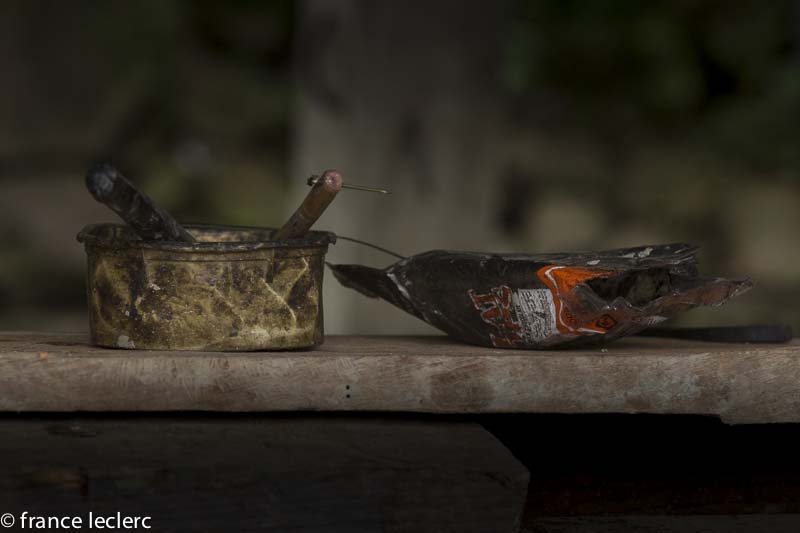 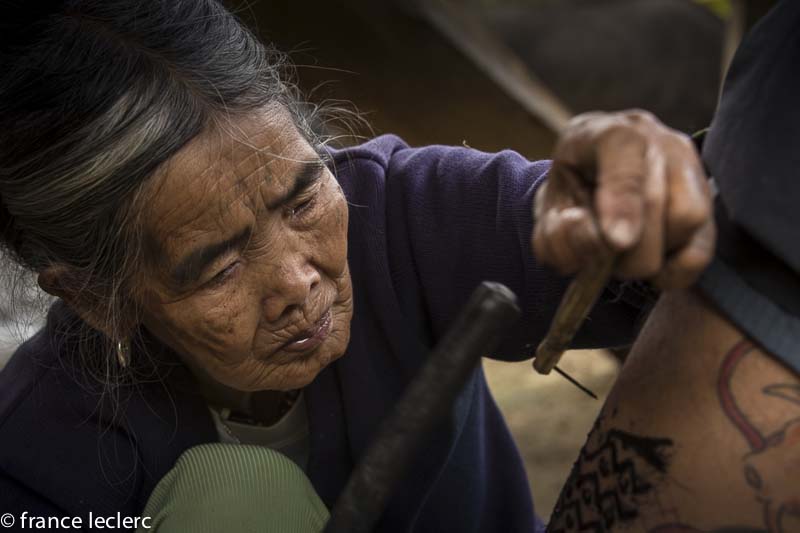 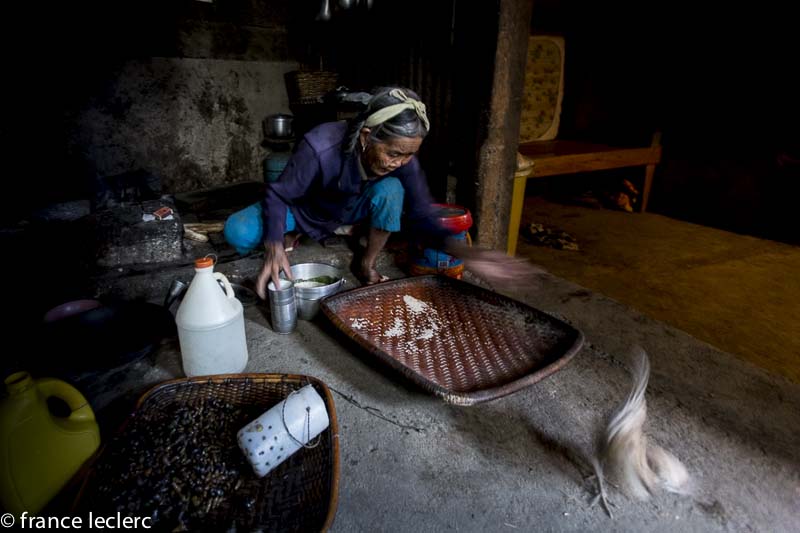 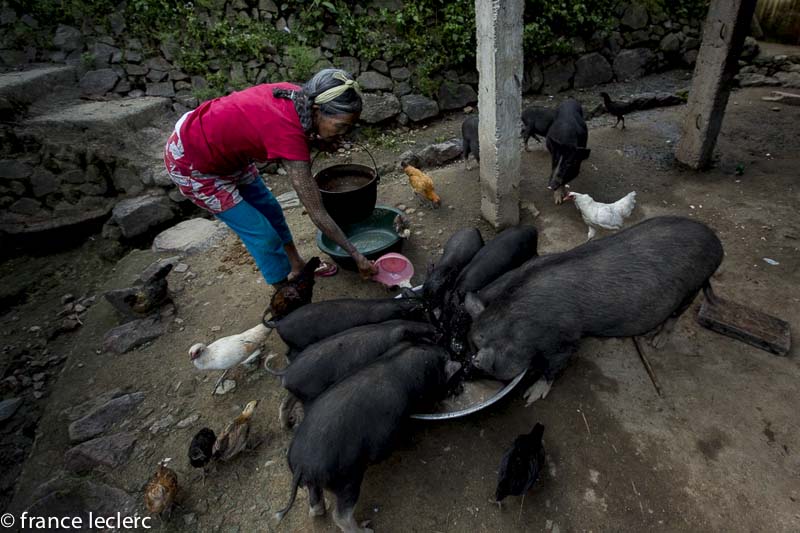 As for the rest of the visit, we spent time with the villagers, who were all remarkably friendly to visitors, kindly offering sweet Kalinga coffee, a very popular drink consumed all day long.  During our visit, a house was being built and everybody in the village seems to lend a helping hand. As the house was nearly completed, a pig and a chicken were sacrificed (and then eaten) to bring good luck to the new property. 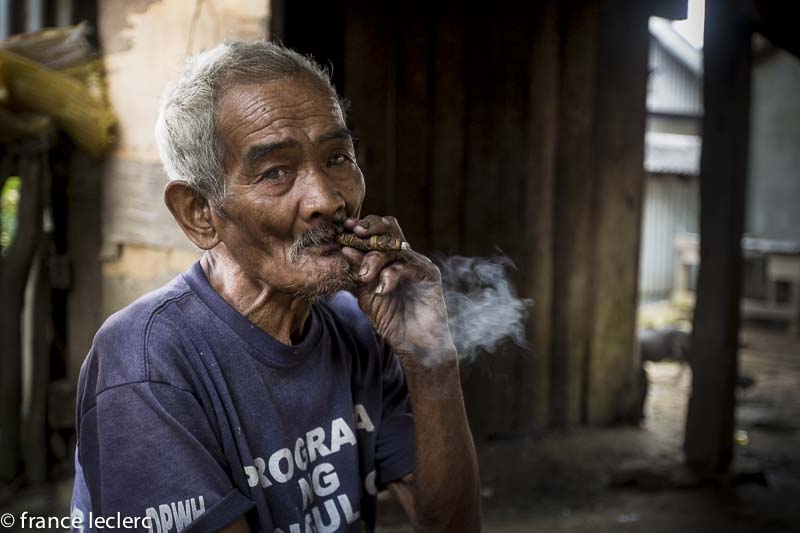 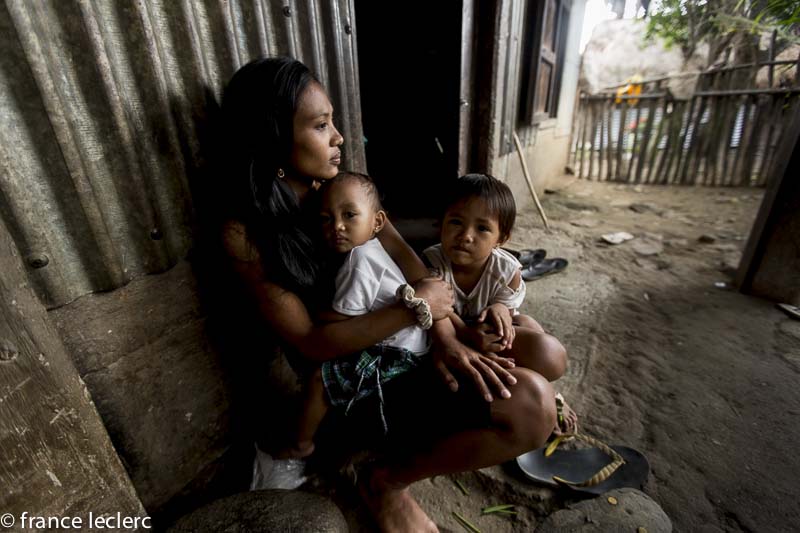 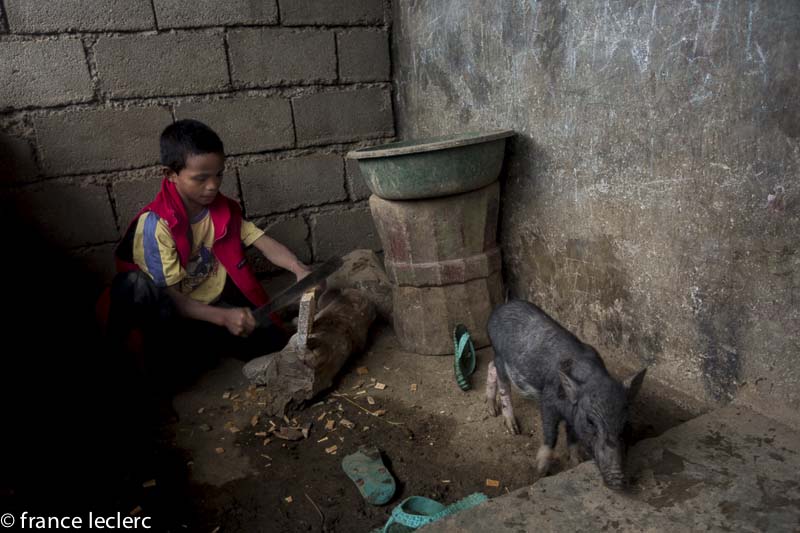 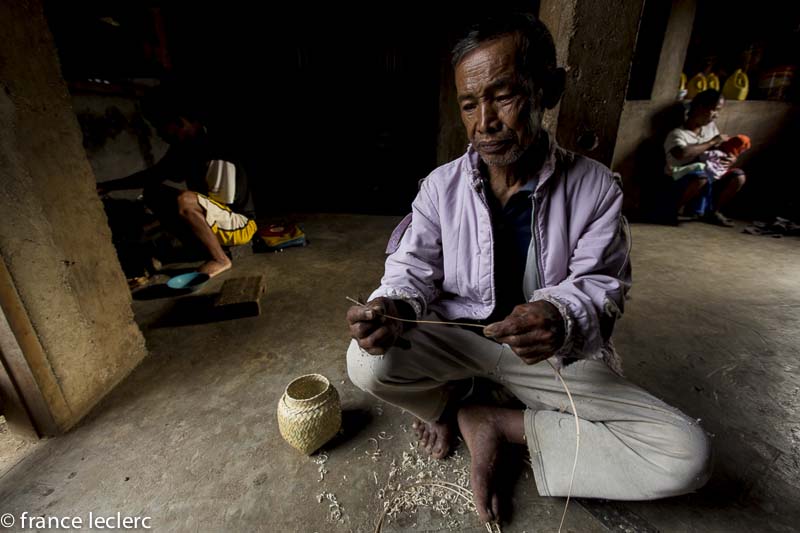 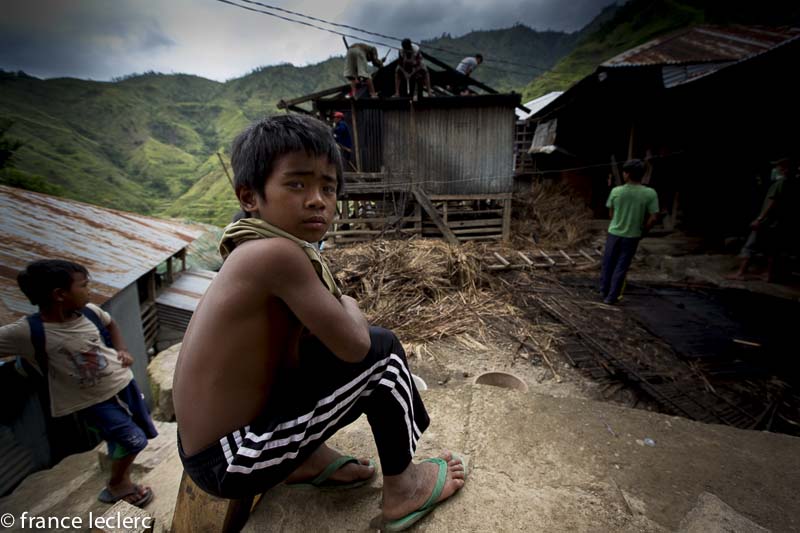 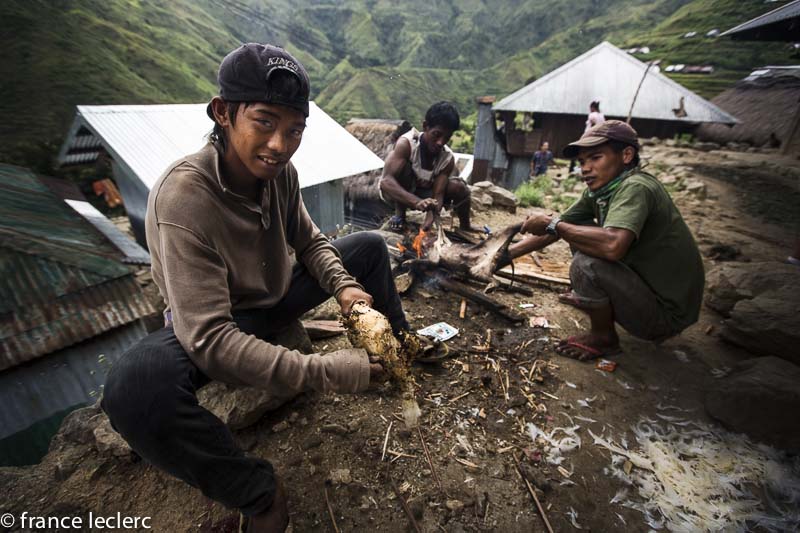 Lots of time was also spent in the rice fields where things were relatively quiet at the time of the year we were visiting.  Only a few workers including older women were getting the fields ready for planting and seeding.  Still, it was hard not to be amazed by the sheer beauty of the surroundings. 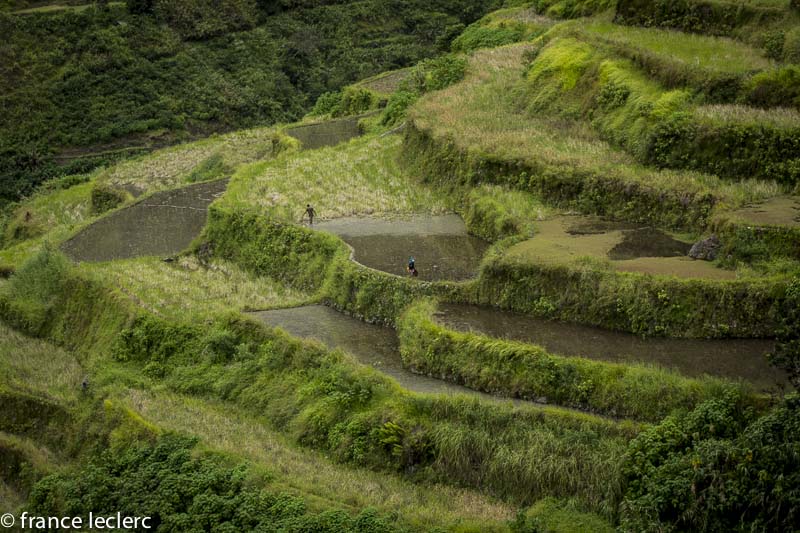 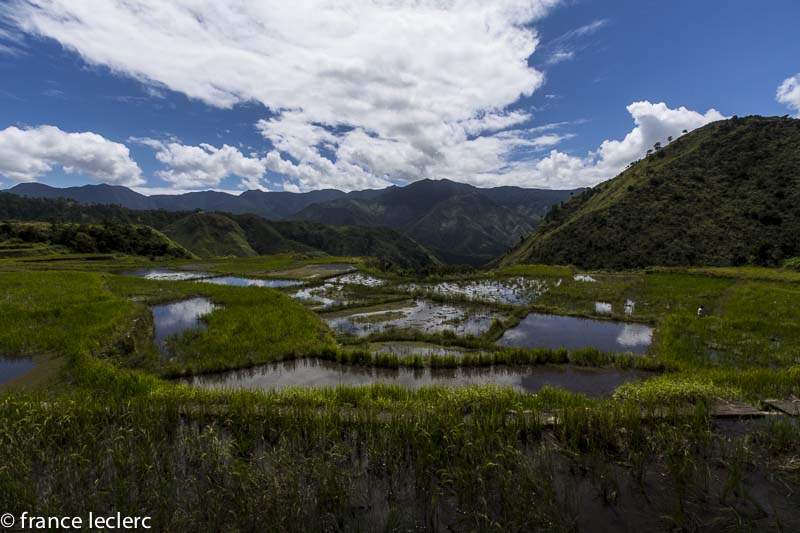 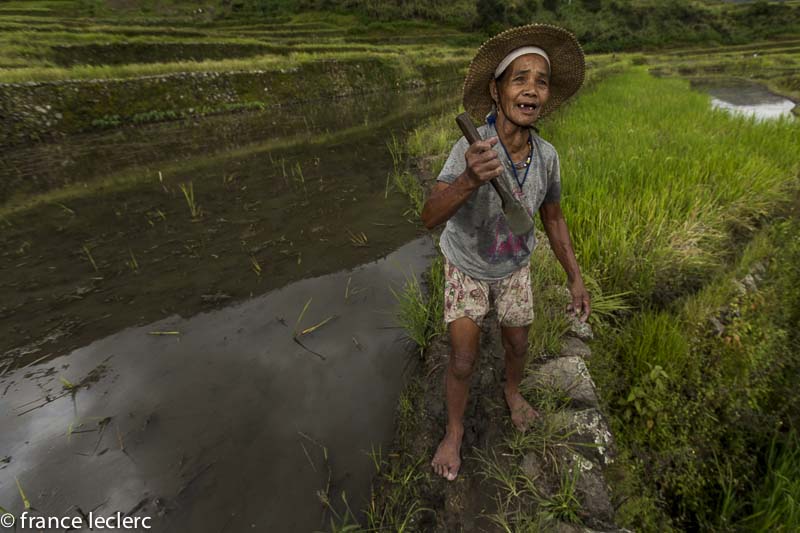 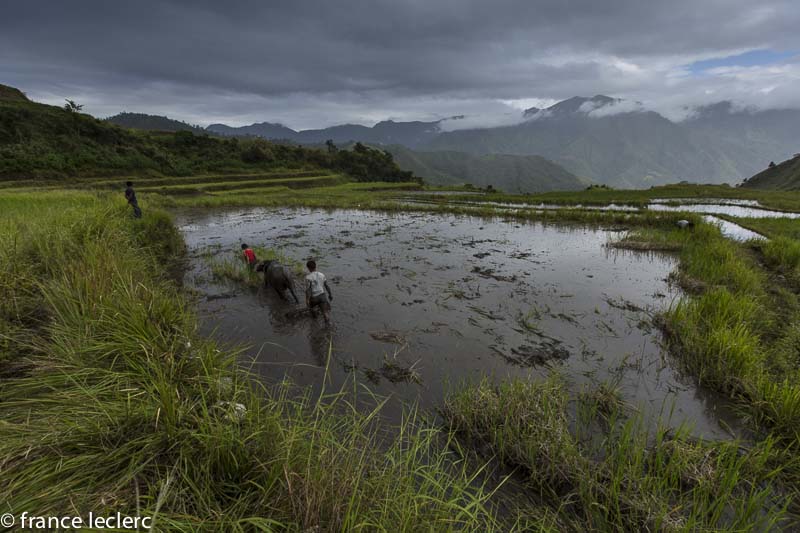 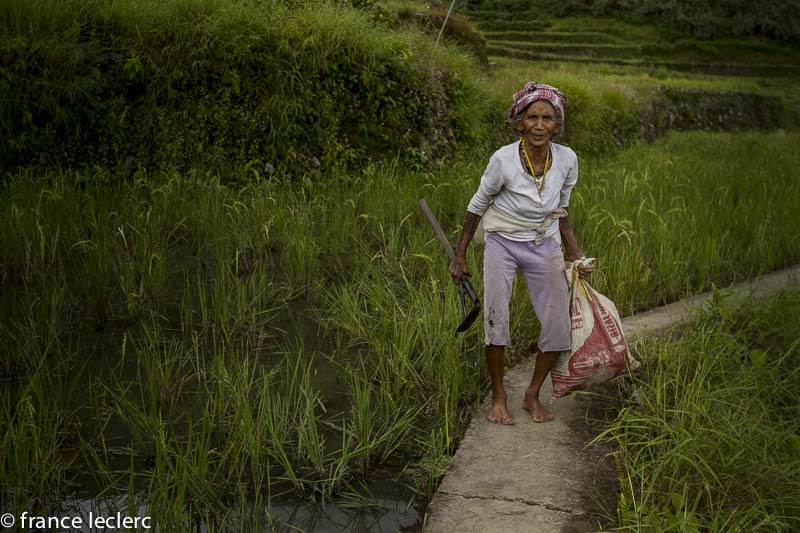 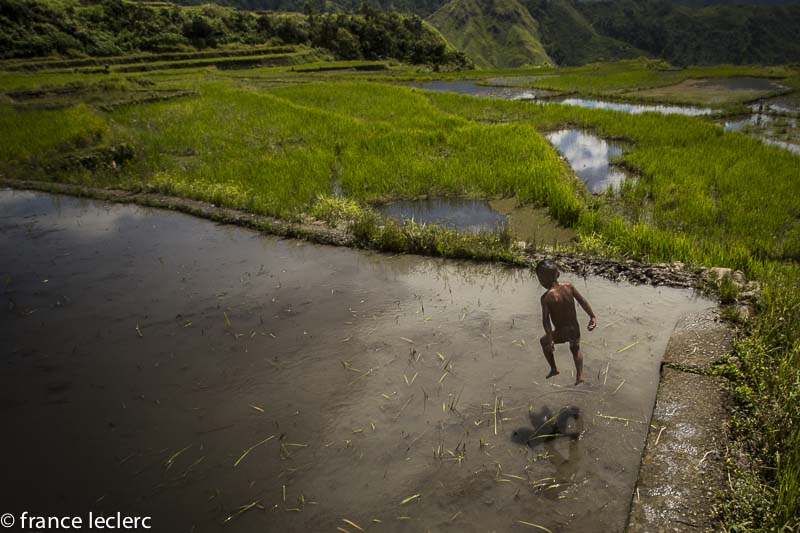 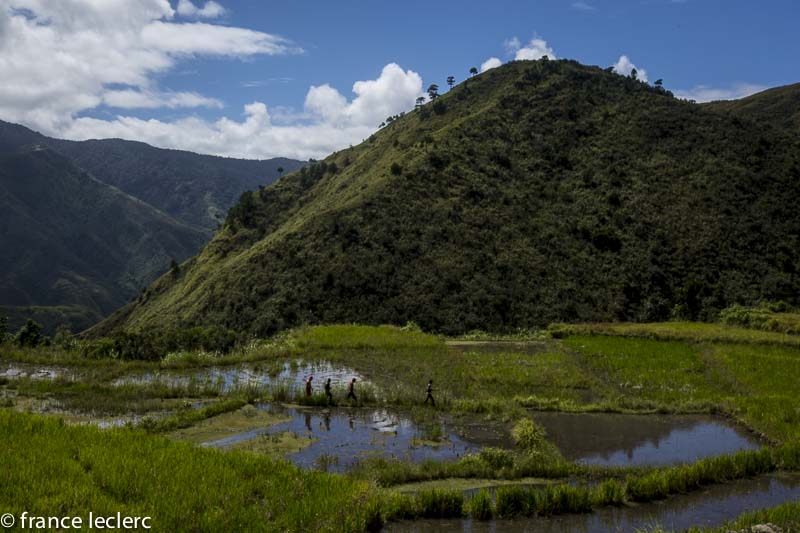