The Kumbh Mela, a “Must” for Sadhus

Sadhus, or Babas as they are often affectionately called, are Hindu ascetic holy men. They have given up worldly pleasures (including family attachment, material possessions, and yes, probably even cricket) in order to focus on their own spiritual practice.  They live in caves, forests, ashrams, temples, small huts in rural villages, or simply wander from town to town.  Since their focus is on attaining salvation, the fourth stage of Hindu life, they mostly spend their time meditating, praying, chanting, and teaching.  Sadhus typically survive on donations from lay people who hope to benefit from their good karma.  As we saw in the last post, sadhus often wear saffron-colored robes as a symbol of their renunciation.

Sadhus are not all of the same ilks, as there are different sects of sadhus.  Most of the subgroups belong to one of two primary classes, based on whether one worships Shiva or Vishnu, two of the main gods of Hinduism.  Among the Shiva followers, are the Naga sadhus.  These sadhus wear their hair in long dreadlocks (in some case, several meters long) and cover their naked body in ashes.  This practice gives them a bluish color, which with the long hair makes the Nagas look like Shiva.  They also consume a considerable quantity of marijuana, as they apparently believe Shiva had an affinity for the leaves of the plants and that it will help them in their path to liberation.  The Naga sadhus are considered somewhat unfriendly and often referred to themselves as warriors of Shiva.

It is estimated that there are 4-5 million sadhus in India.  As far as I could tell, they were all at the Kumbh Mela without exception (I counted them all).  Suffice to say that a week at the Kumbh Mela is a sadhu-intensive experience. Early on during our visit, we witnessed the initiation of a large group of men into Shiva brotherhood. These men were sitting near the water, naked except for a loincloth and with a shaved head except for a patch of hair left on the top. As we arrived, they were attentively listening to a guru.  Soon after, they were instructed to make an offering in the adjacent holy river at which point they all stood up and went to the river.  They then were invited to go to the “sadhu camp” and we followed along.  There, the newly initiated sadhus sat together around a fire, sharing some cannabis.

The “sadhu camp” which I returned to a number of times was simply fascinating.  There, one can find a number of sadhus waiting for their followers to visit them.  It almost felt like one was in a sadhu “shopping mall” as sadhus occupy adjacent spaces, one after another, much like a strip mall. There, pilgrims come, ask for blessings, occasionally touch the feet of the sadhu, a sign of respect, and generally make a donation.  In return, the sadhus give a blessing and may also give sweets, maybe to provide mystical energy.

The sadhus at the camp differed quite substantially from one another.  Some had on elaborate headdresses made of seeds of the Rudraksha tree (Rudraksha means Shiva’s eyes in Sanskrit), others had decorated themselves with marigolds, yet others were simply sitting next to their trident, one of the symbols of Shiva.   Some of them have been performing rigorous austerities to show their followers that they have control over their bodies and that their bodies mean nothing.  For instance, one of the sadhus I visited had a leg propped up behind him while sitting in a swing, and he claimed that he has not put the leg down in years.  Another one was sitting on a throne of iron spikes.  But by far the biggest attraction in this category is Amar Bharti Baba who has been holding his arm in the air for 30 years during which period he also let his fingernails grow wild.  Large crowds lined up for a view of his emaciated arm and corkscrew-like fingernails.

This is all obviously a bit overwhelming for a Westerner.  But every religion has its rituals, which often appear unusual to uninitiated.  As for me, I experienced my own little miracle.  At the “sadhu camp”, I unexpectedly ran into a sadhu that I had met in Haridwar (620 km away) two years earlier on another trip.  A group of us had asked him then to give us good “photographic” karma and he had kindly blessed us.  Running into him again among 30 million people was for me one of the most incredible moments of the Kumbh Mela.  The last two photos are of him, with his unforgettable gap-toothed smile.  The first one was taken in Haridwar and the second one at the Kumbh Mela. 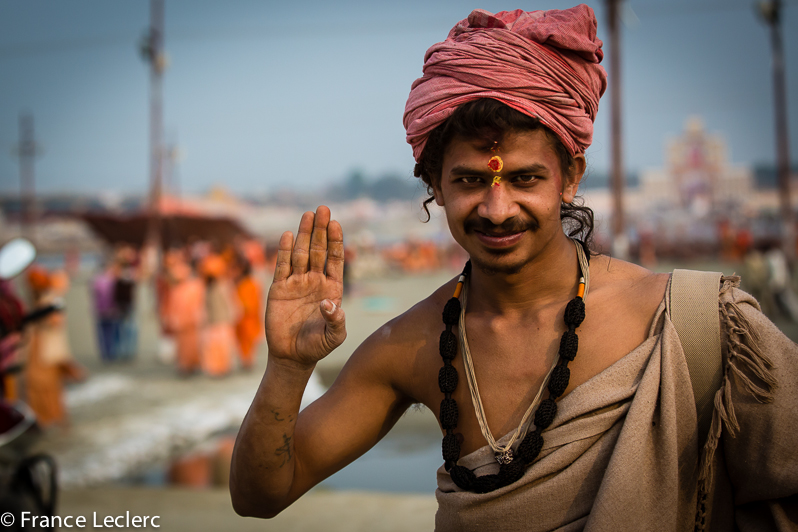 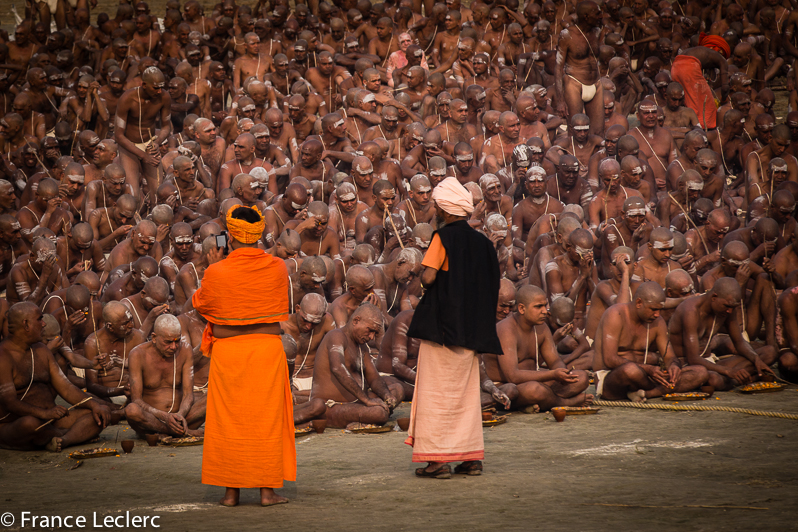 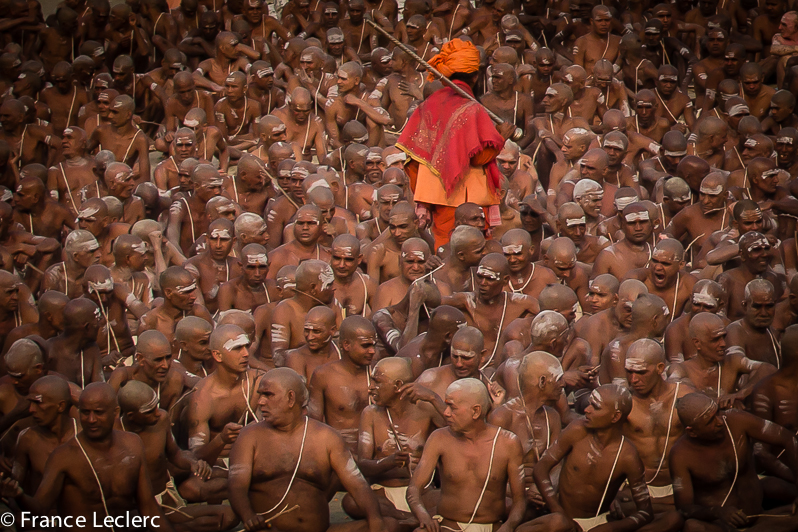 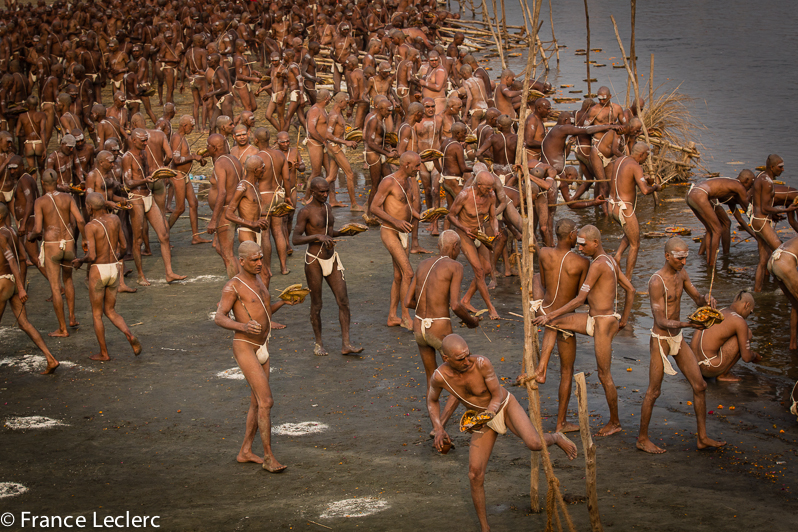 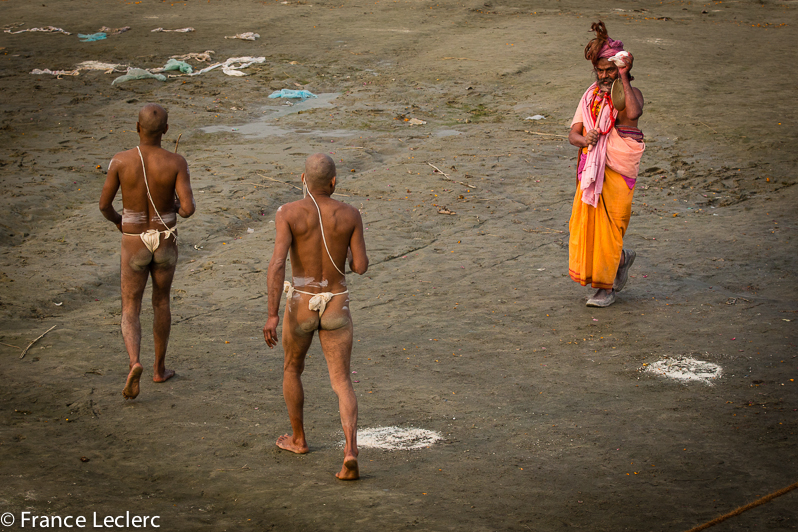 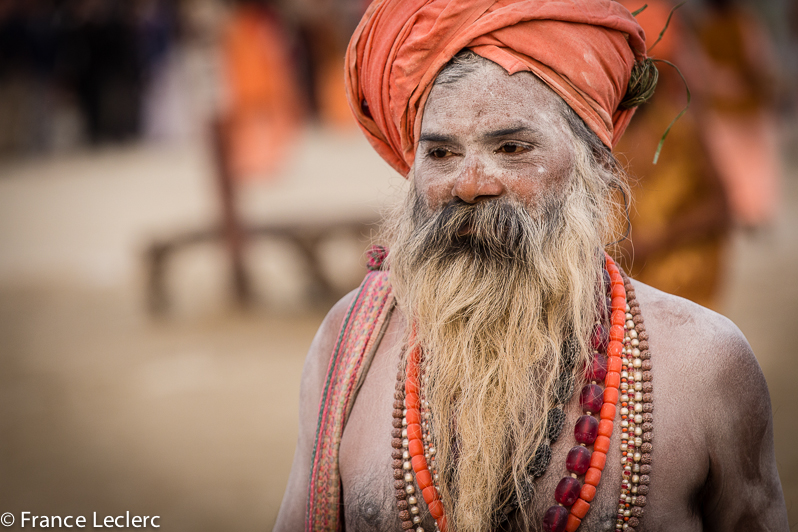 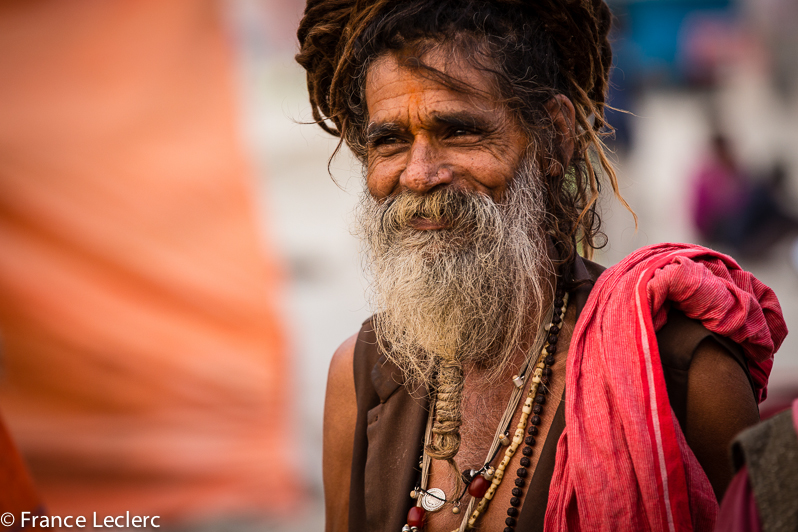 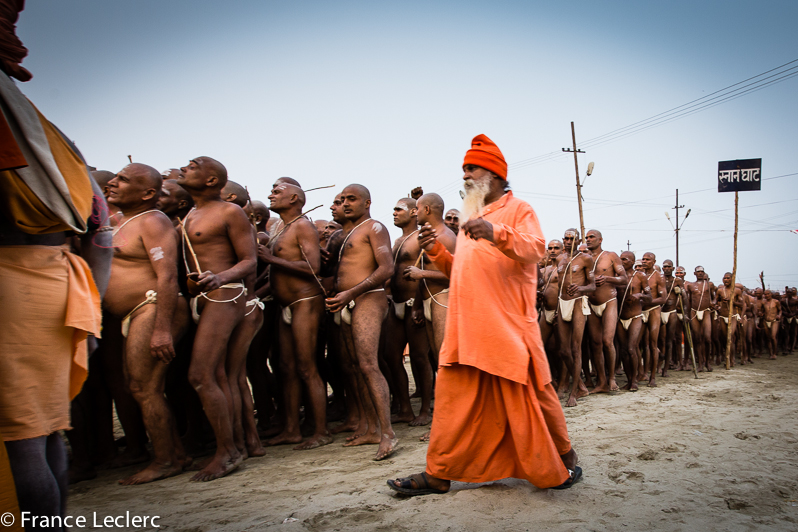 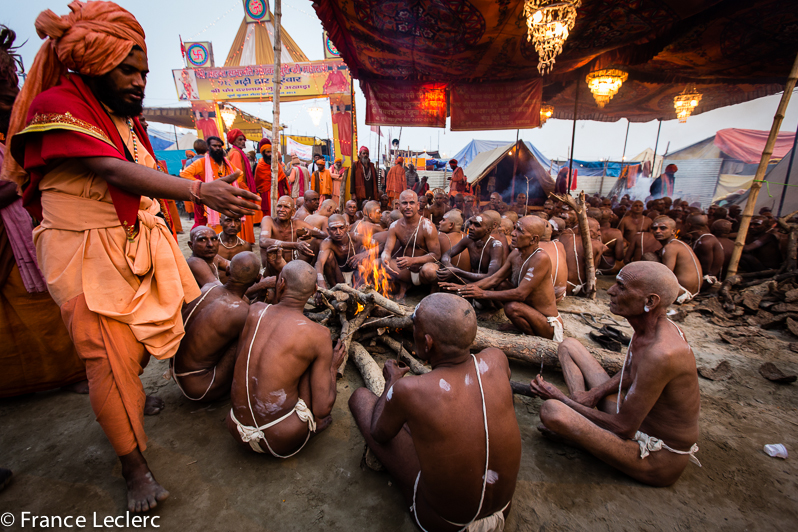 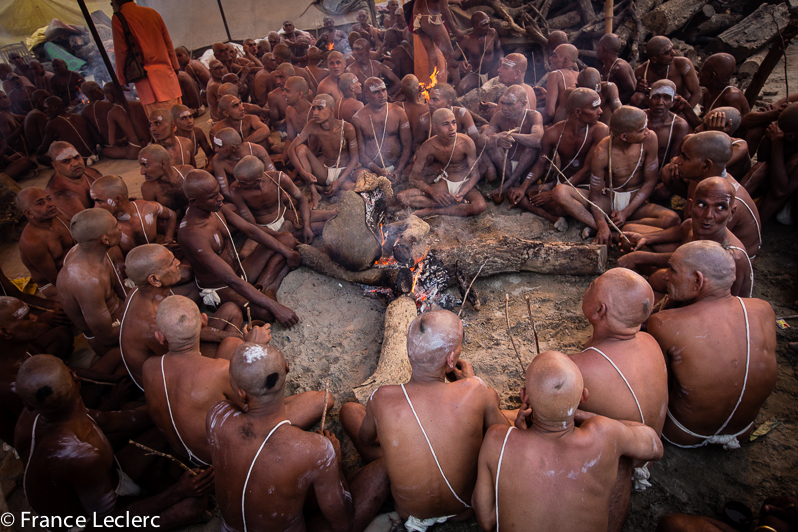 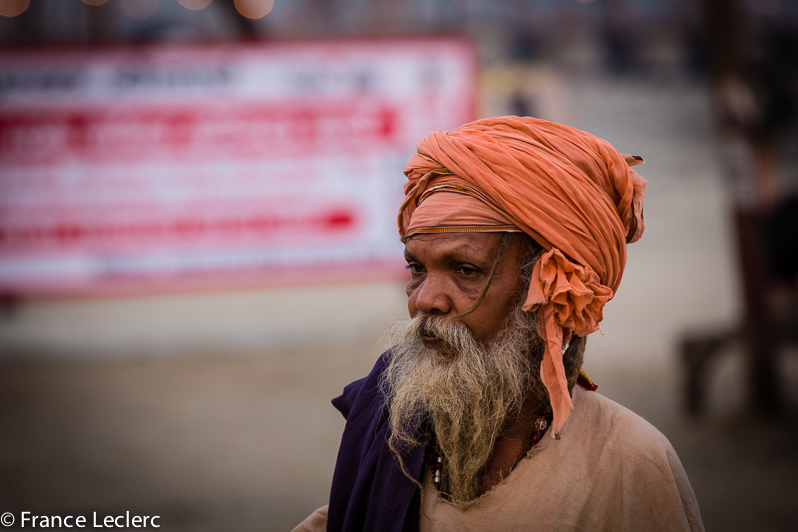 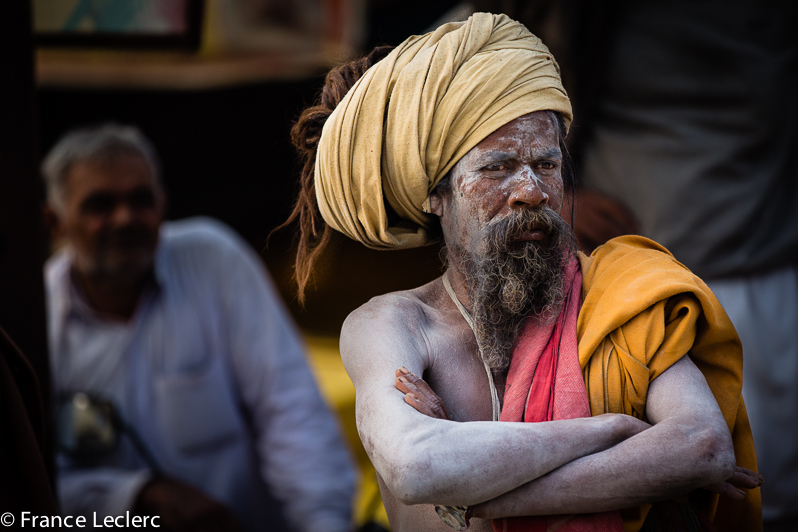 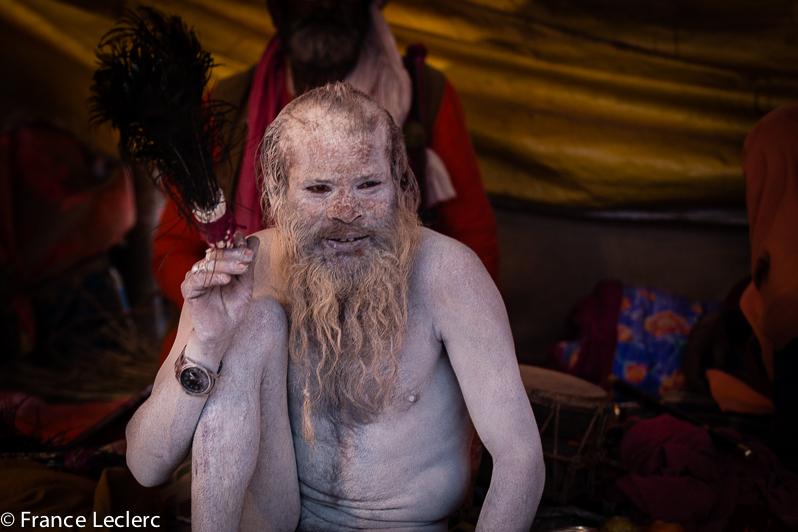 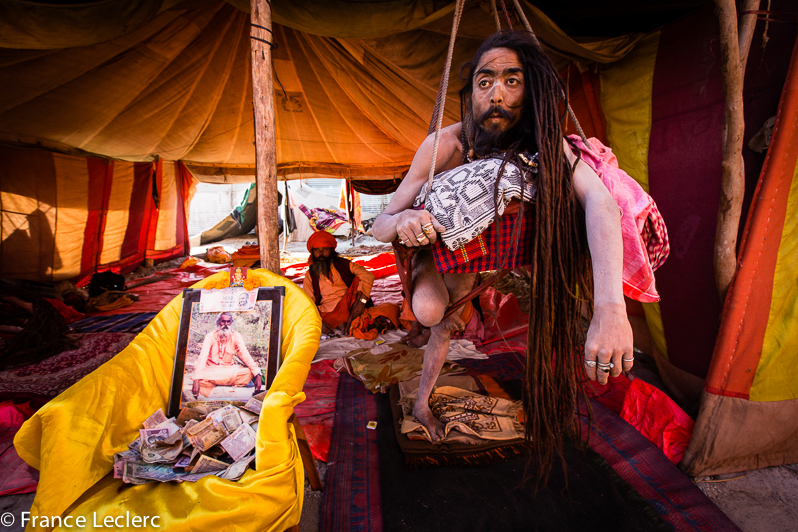 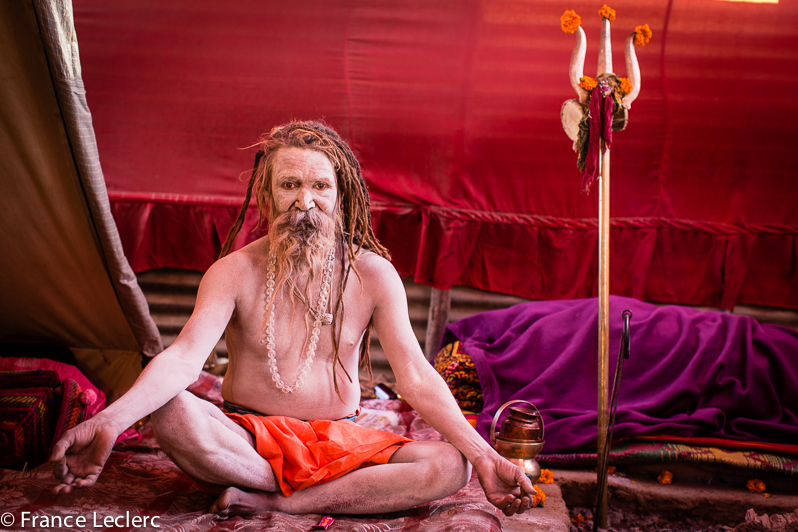 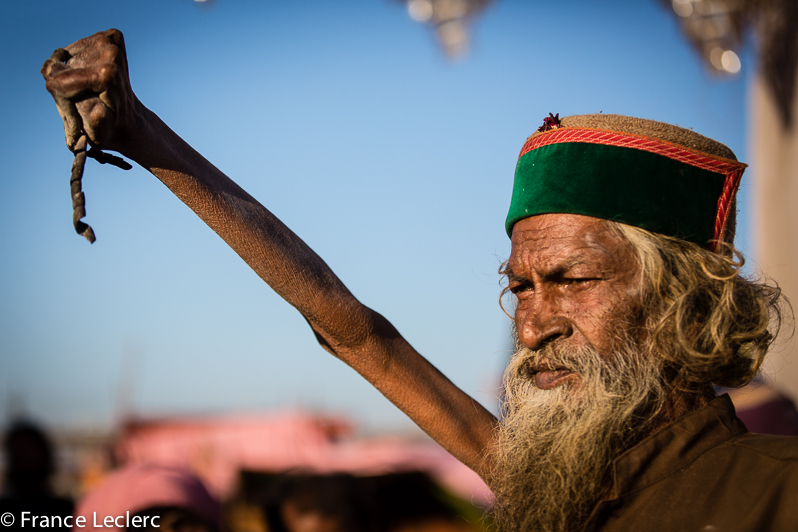 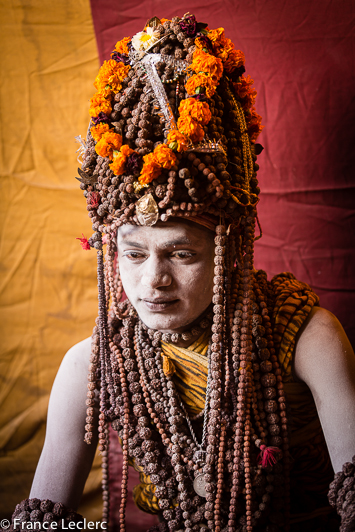 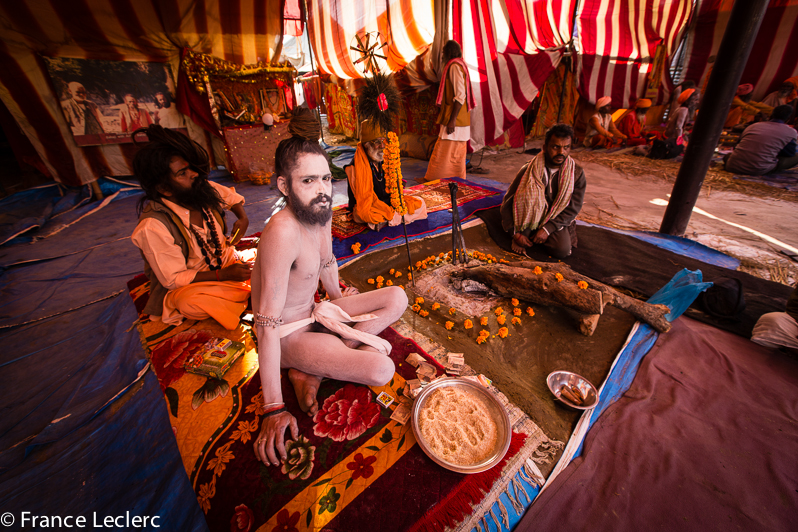 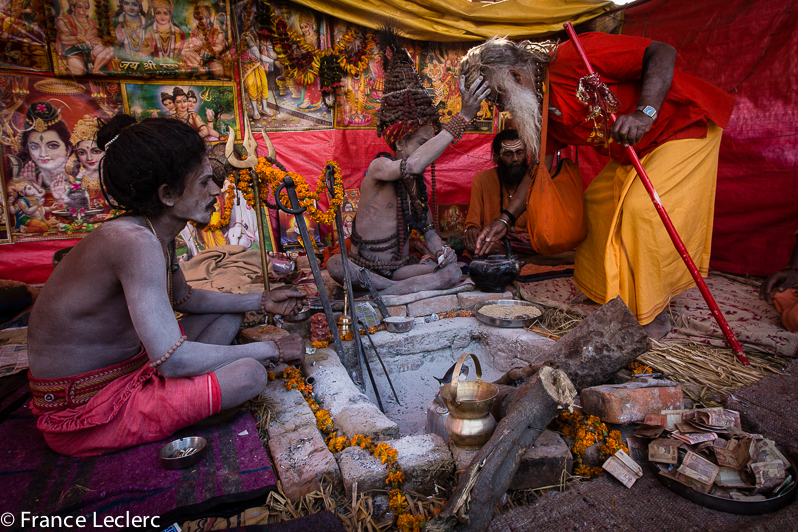 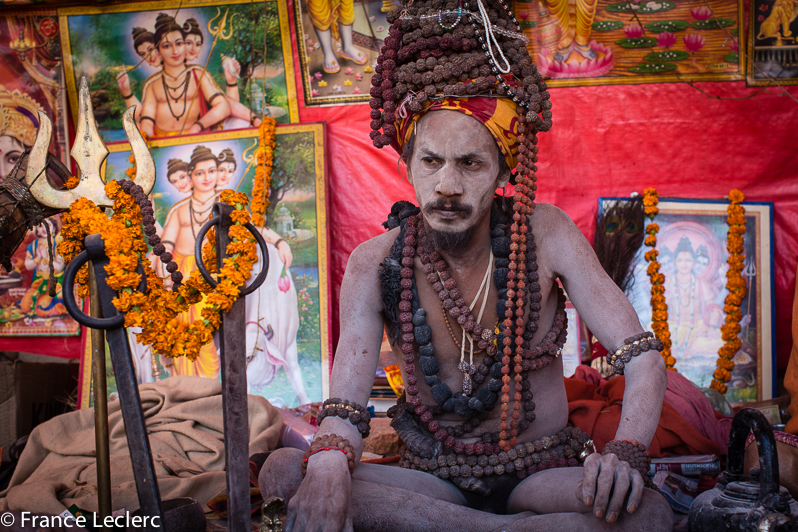 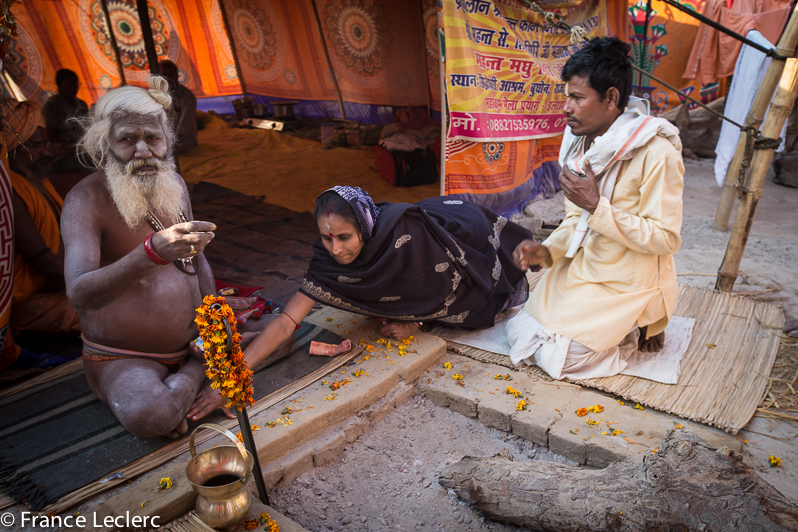 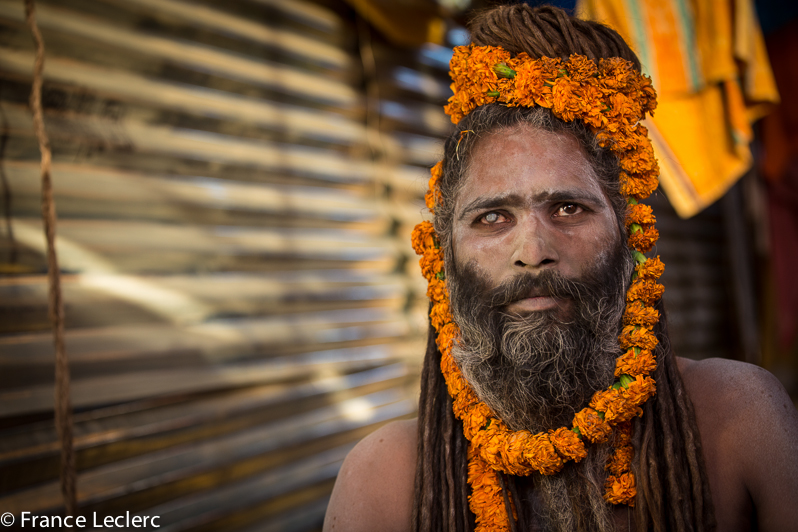 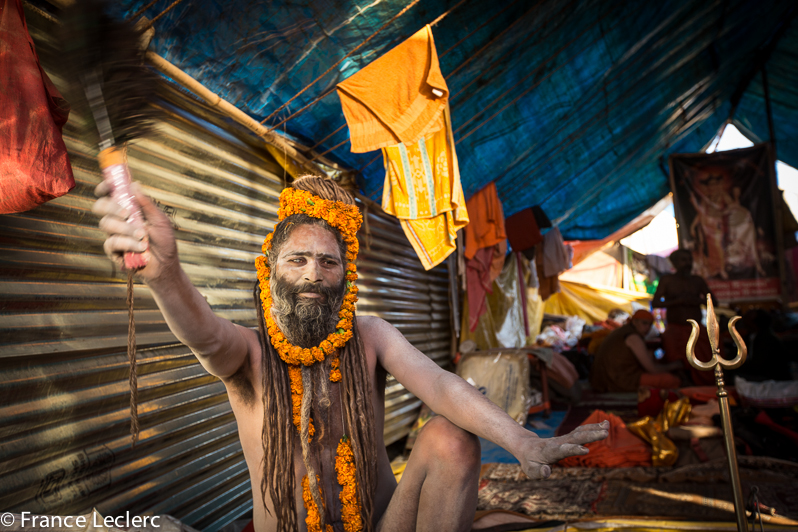 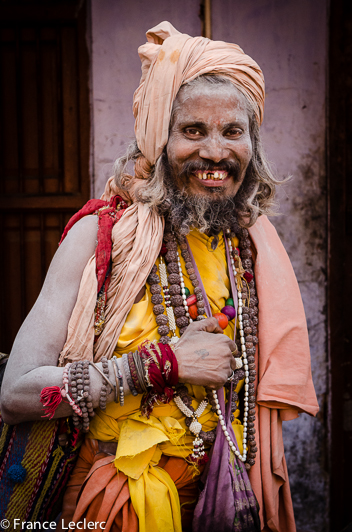 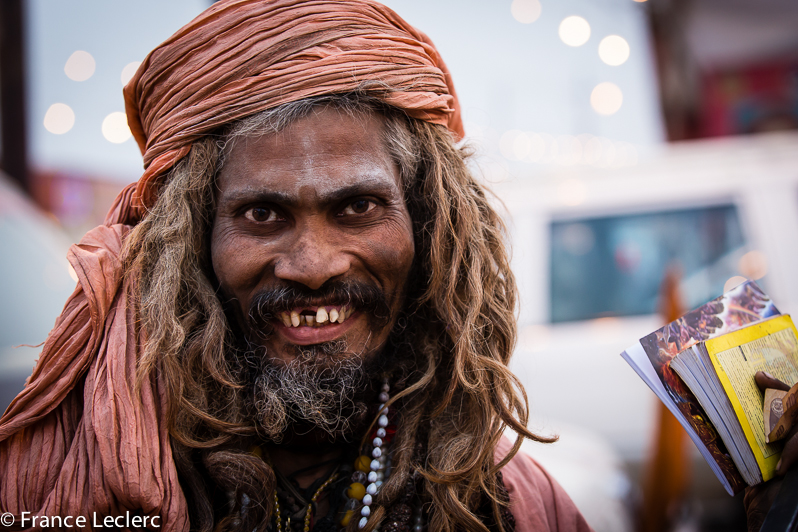