The Kara Tribe: A Dinner Invitation and an Evening of Dance 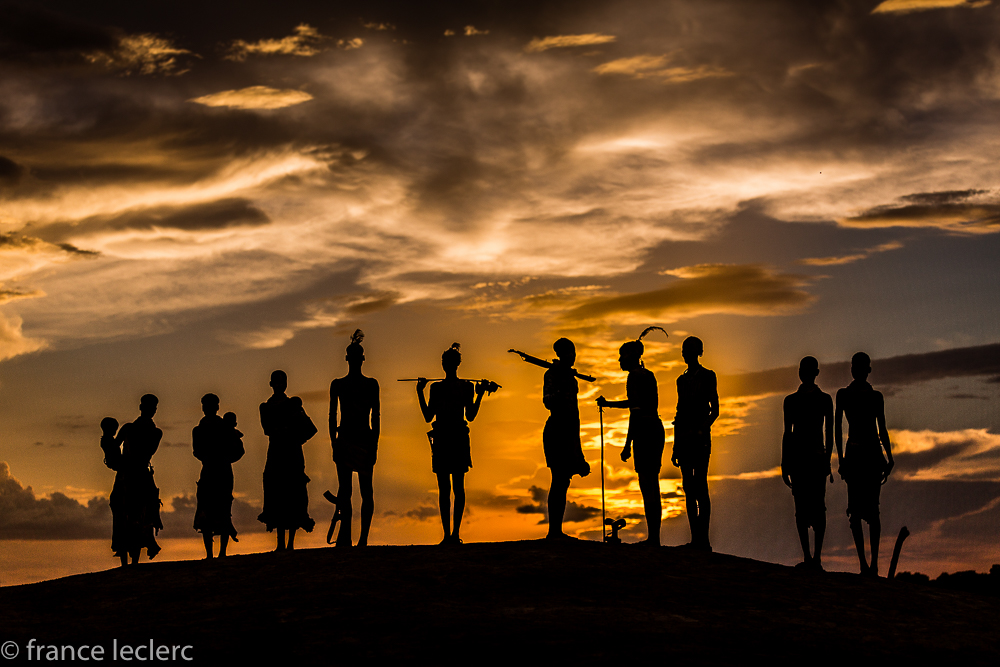 First I want to convey my heartfelt thanks to each of you who commented on my previous post.  I am new to blogging and this was really an amazing response.  I was particularly touched by comments from some Ethiopian readers.  It pleased me greatly that they were supportive of an outsider sharing photos of their beautiful country and people.

Reading all the comments also made me feel that I should introduce myself a little better.   I am not an anthropologist, nor an activist, nor a journalist though I often wish I were all three.  I don’t pretend to understand or endorse the various cultural practices I witness nor do I claim to depict fully people’s challenging daily lives.  I am a traveler and a photographer.  I care deeply about the people I photograph and I respect them.  I will try to bring attention to their particular plights if I think I can help.  But my main focus is that there is beauty in all cultures (even when we don’t see it initially) and that it should be shared.  And I am, like many of you, very distressed by the idea that some cultures, traditions, beliefs are now disappearing as a result of globalization and/or geo-political forces.  It would be sad if the world became completely homogenous.  (Still, it is also the case that I would not be sorry to see ethnic groups abandon some of their harmful practices.  Visiting such tribes always produces complex, mixed emotions.) I am hoping, maybe naively, that photographing diversity will at least raise awareness of the existence and richness of these cultures and perhaps help preserved some aspects of them.  Others may argue (and have argued) just the opposite; that photographing these cultures will hasten their assimilation and disappearance.  I fervently hope they are wrong, but no one can be sure about such things.

Enough philosophizing and back to the Omo valley, where after spending time with the Surma, the tribe shown in the previous post, we went on to visit with the Kara (or Karo) tribe on the eastern side of the Omo River.  The Kara tribe is the smallest ethnic group of the Omo valley with less than 2,000 members left.

We visited two Kara villages, one of them, Dus, is considered the capital of the Kara. Lebouk, the other one, is slightly smaller.  These villages are clusters of conical huts.  We mostly traveled by boat from our camp to the villages because the dirt roads barely qualify for that term, and everything turns into deep mud at the slightest rain (something we got to experience first hand at the end of a very long day trying to get back by car from a visit to the Turmi market.)

Even though cattle and goats are prized possessions, the Karas are primarily an agriculture-based society.   They mostly grow sorghum, a grass species cultivated for its grain, but also maize and beans.  One can see women grinding flour out of sorghum in the village.   The Kara women are very attractive and fashionable.  They don’t wear a lip plate as the Surma women do, although a number of them sport a nail (or nail-shaped object) sticking out of their chin (as do some men and children).  They wear their hair short and typically use a mixture of red clay and butterfat to shape it into what looks like beads. Women wear beautiful skirts made of goatskin that are slightly longer in the back.  Little girls wear them as well, but often they tuck the back part in their belt so that they can play and run like the boys.  Kara women also decorate themselves with several colorful necklaces as well as beaded headbands.

Kara men, not to be outdone, adopt an impressive headdress once they become “elders”.  As I mentioned in my last post, the Kara and Hamar men go through a bull-jumping initiation.  (Stay tuned for pictures in my post about the Hamar tribe.) Once they have been initiated and become an “elder”, men will often wear what looks like a skullcap made of mud that is typically decorated with an ostrich feather.  Also, after initiation the men have their left ear notched, presumably to indicate that now they are able to listen.  (If the ear notch makes one a better listener, perhaps I should consider this procedure for my husband!) Only men with their left ear notched have access to the ceremony house where men speak of important matters about the tribe.  Kara men and women also do body painting, mostly with white or ochre paint.

Kara men, as well as men from some other tribes, constantly carry with them a small stool called a borkoto.  They sit on these stools and look princely while women sit directly on the ground with their legs extended straight in front of them. I am not sure whether the men have adopted the use of this stool as a reflection of their status or because of a lack of physical flexibility.  We were told that these stools are also used as a pillow when they sleep so as not to damage their headdresses.

Like all kids, Kara children are very playful when they can be.  Not surprisingly, a rain shower was an opportunity for splashing and a small home-made soccer ball provided them with endless hours of play.

We were fortunate enough to be invited to the roasting of a goat.  This is a rare event as goats or cattle are only killed on special occasions.  Luckily for us, our tour guide had contributed, on a previous visit, to the Dus’ Women Association to try to help them to start a local market.  As a way to thank him (and I suspect, subsequently ask for more funds), the women’s group treated us to this feast.  First, around noon, a group of women came to the camp, dancing and playing the trumpet as a way of a formal invitation.  The normal response would have been for us to follow them to their village immediately but since we had a visit to another village planned for the afternoon, we joined them later in the day.  Kara men did the roasting of the goat. When the goat was ready, the meat was first offered to us, then to the men, the women, and finally the children whose evident delight confirmed the rarity of the event.  Homemade honey beer was consumed as well by men and women.

The next evening, we were informed that there would be a dance at Lebouk.  The Kara dance beautifully with their bodies colored with ochre.  Initially, men mostly jumped in groups in front of the women. The vertical height of these jumps was very impressive, although I was told that some tribes jump even higher.  Later, women responded with their own leaps and moves, joined by young girls imitating them flawlessly.    In the end, men and women got together and danced all under the careful watch of the elders.  It went on for a very long time, until sunset, generating a lot of golden dust on the way, which made for a magical moment at the end of our visit.

Come eat and dance with the Kara. 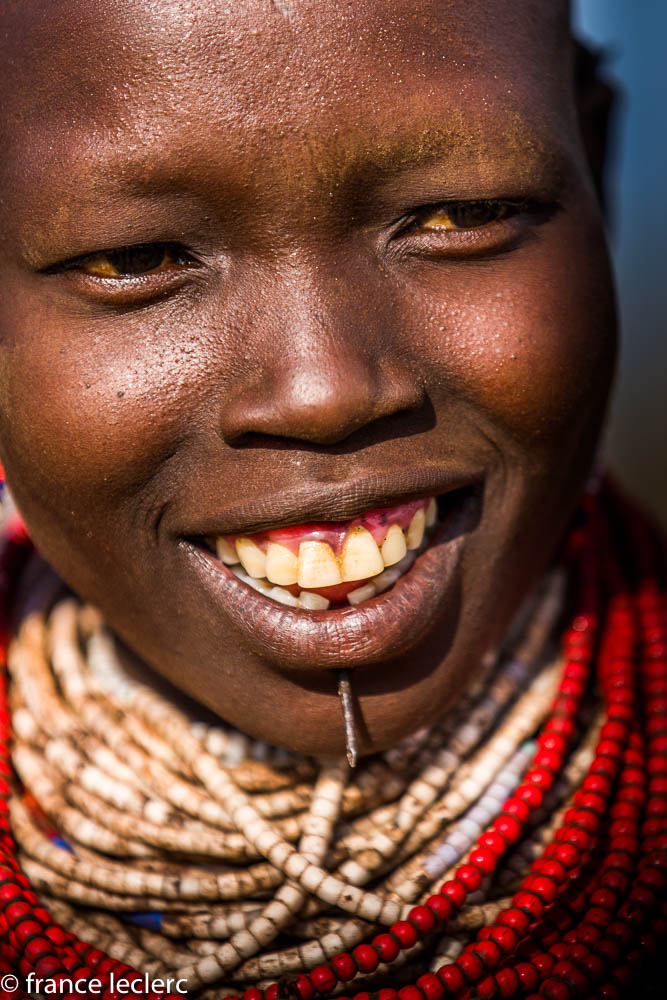 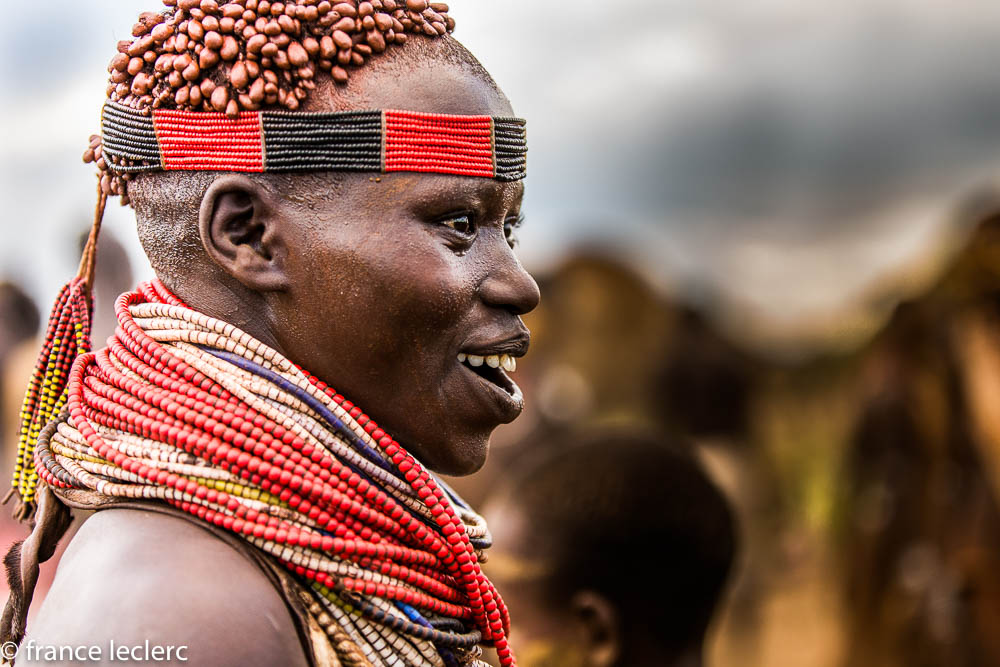 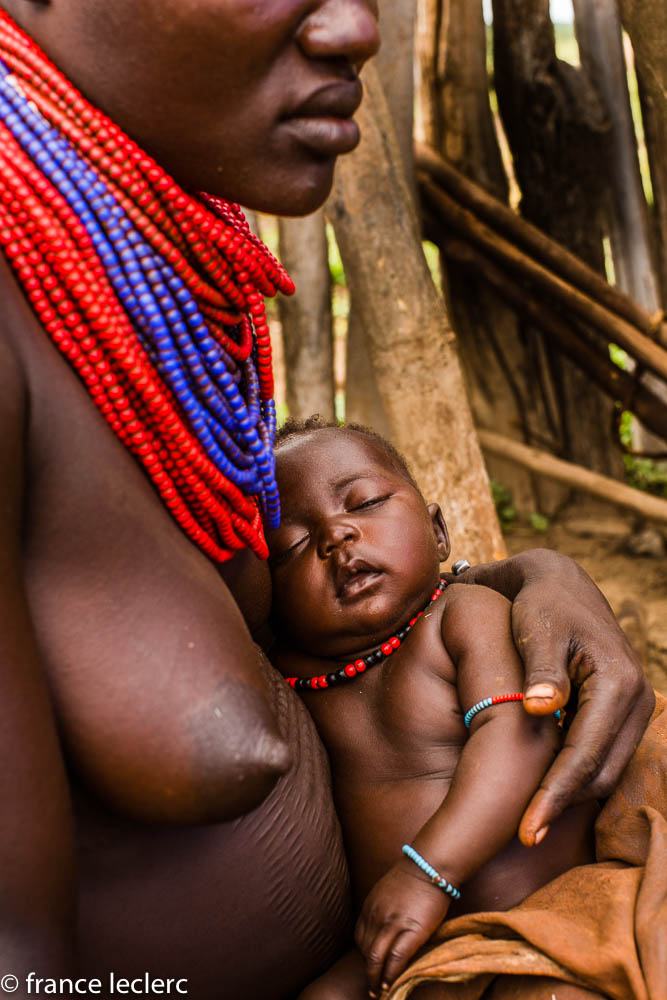 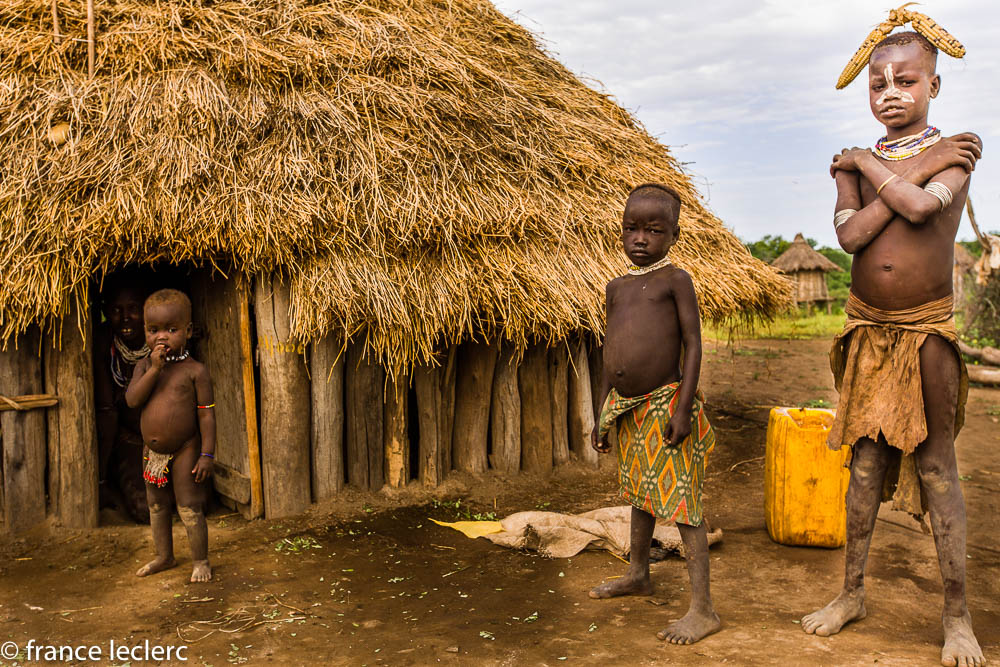 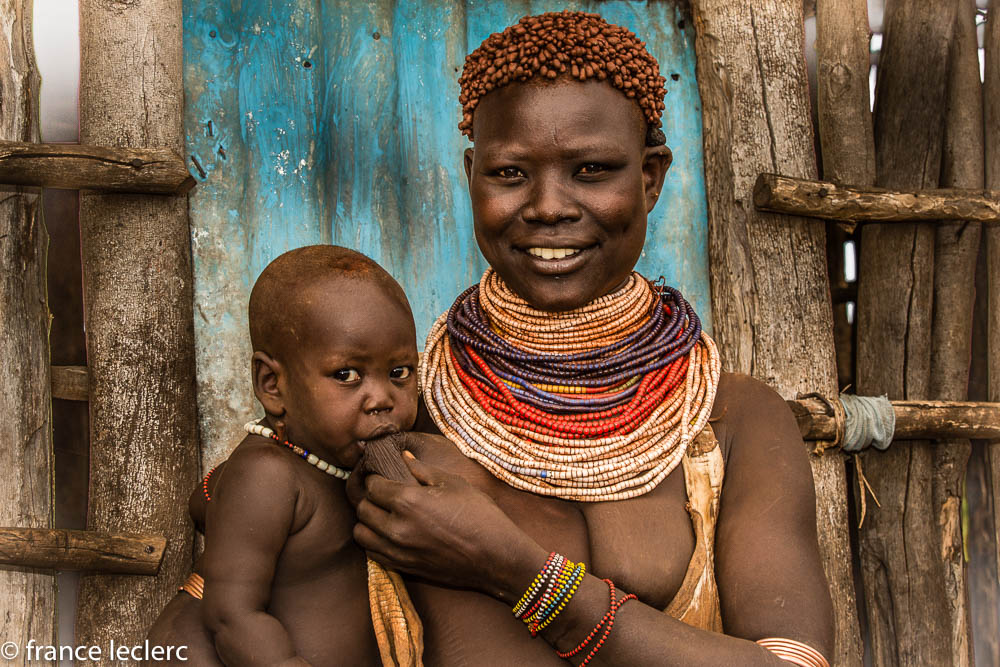 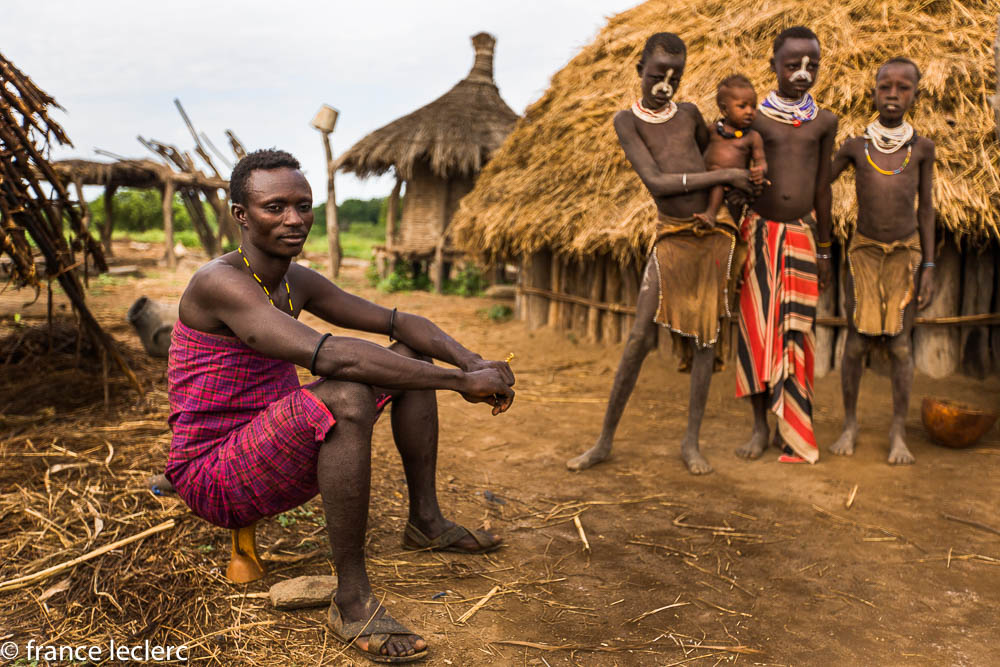 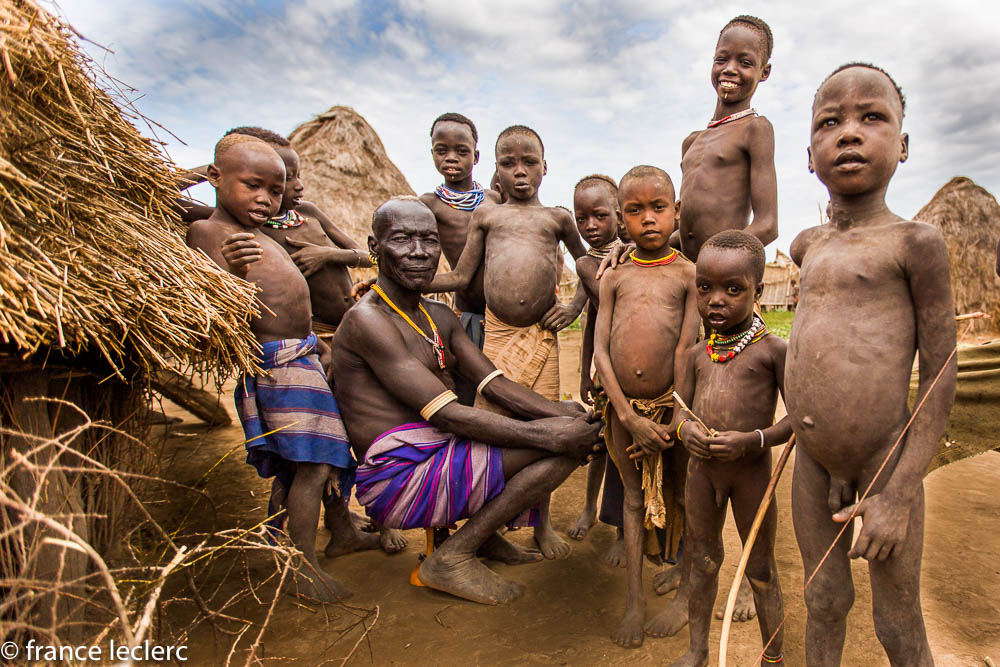 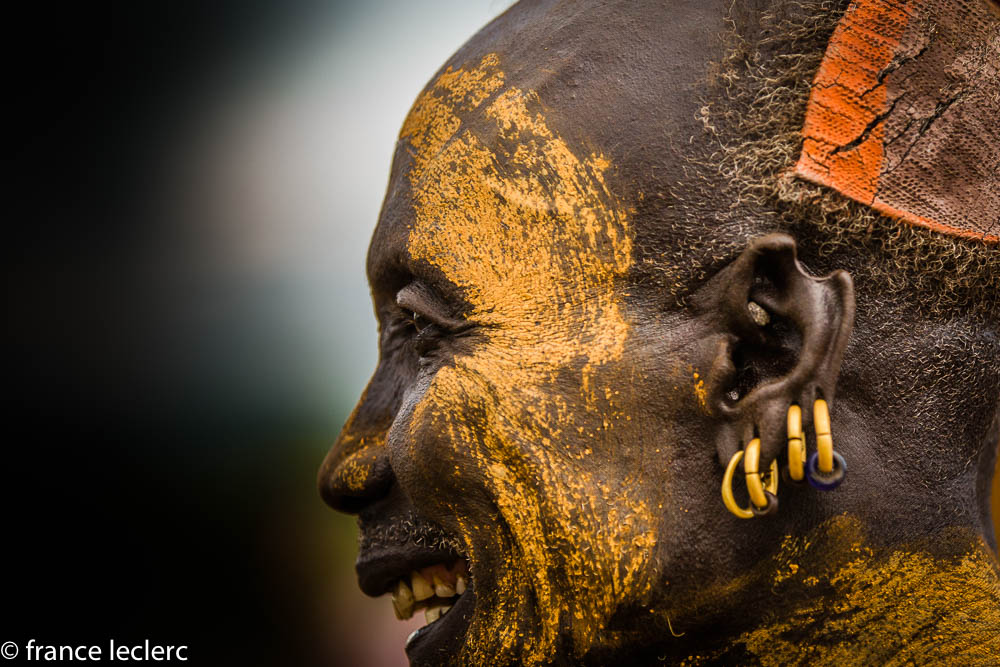 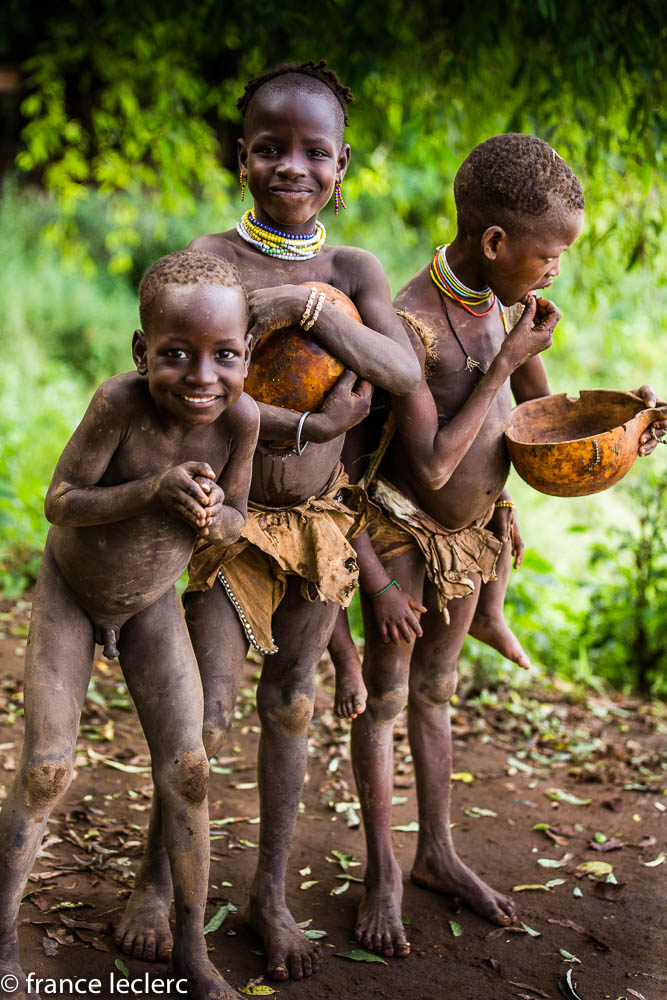 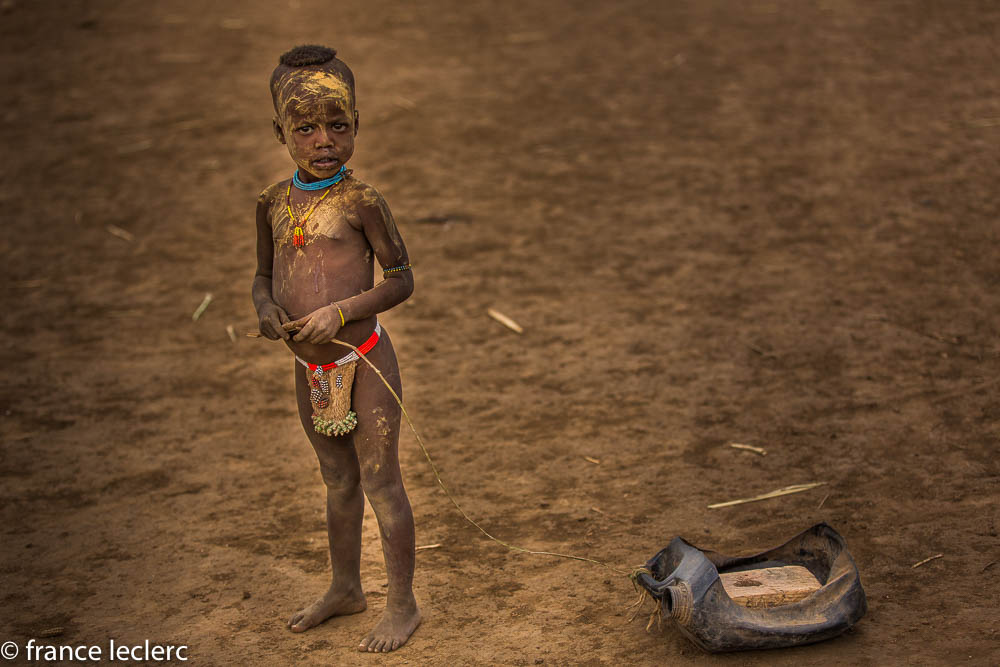 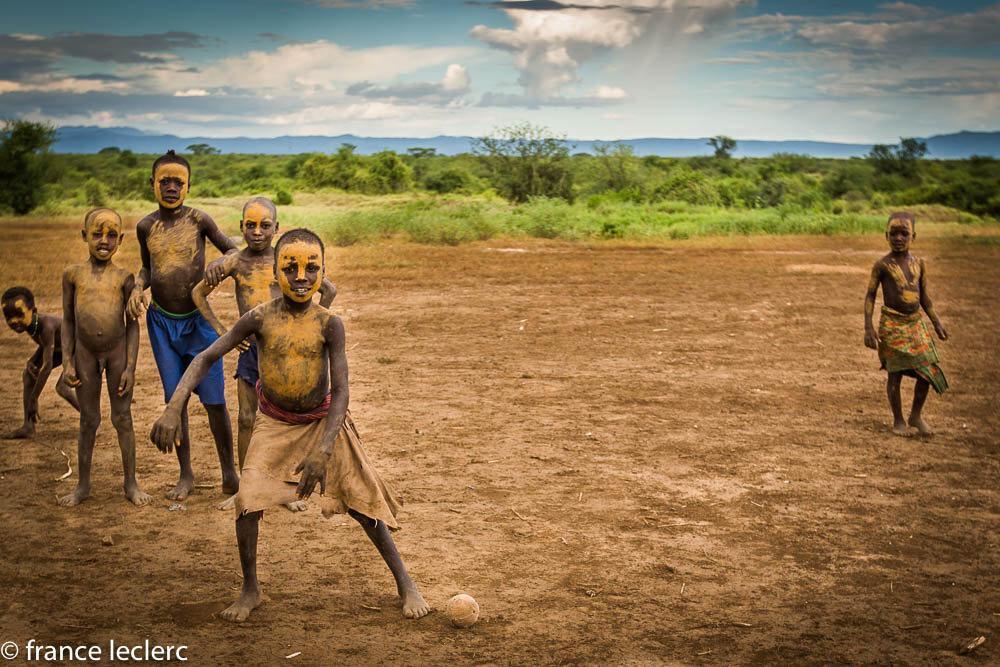 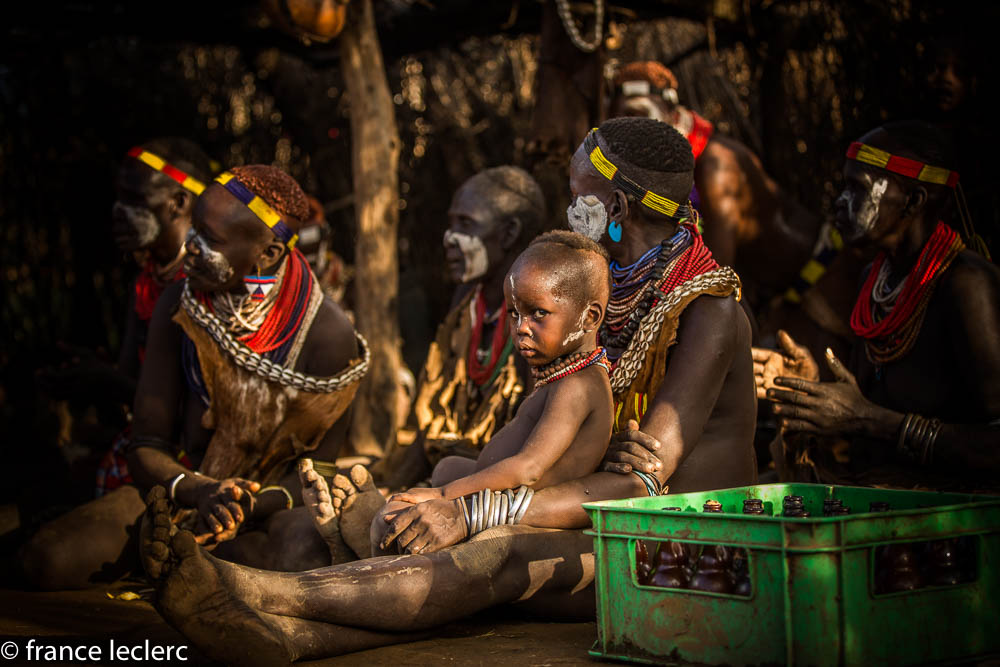 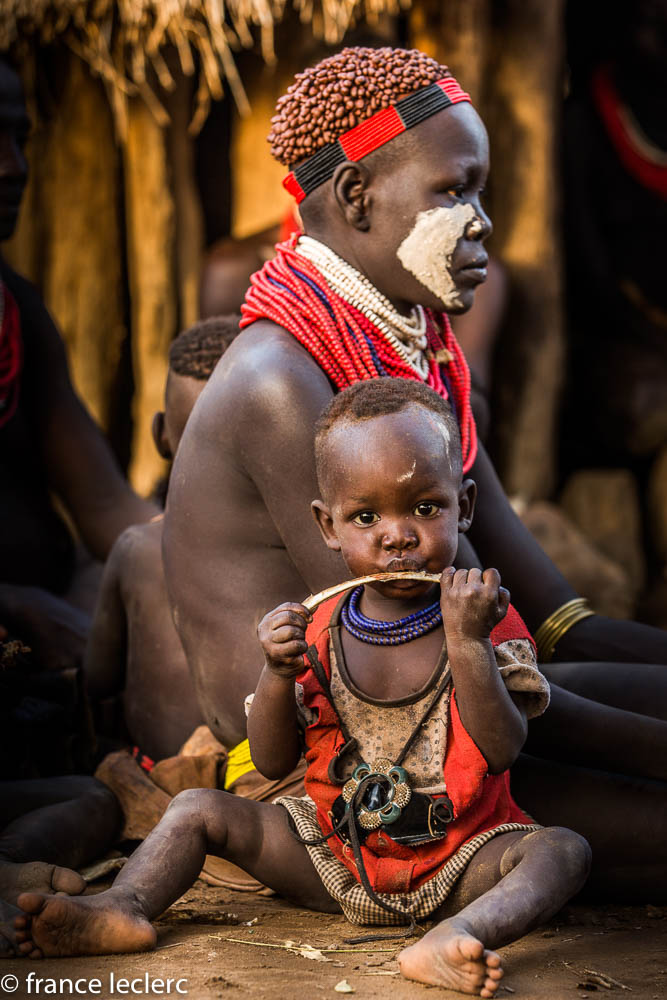 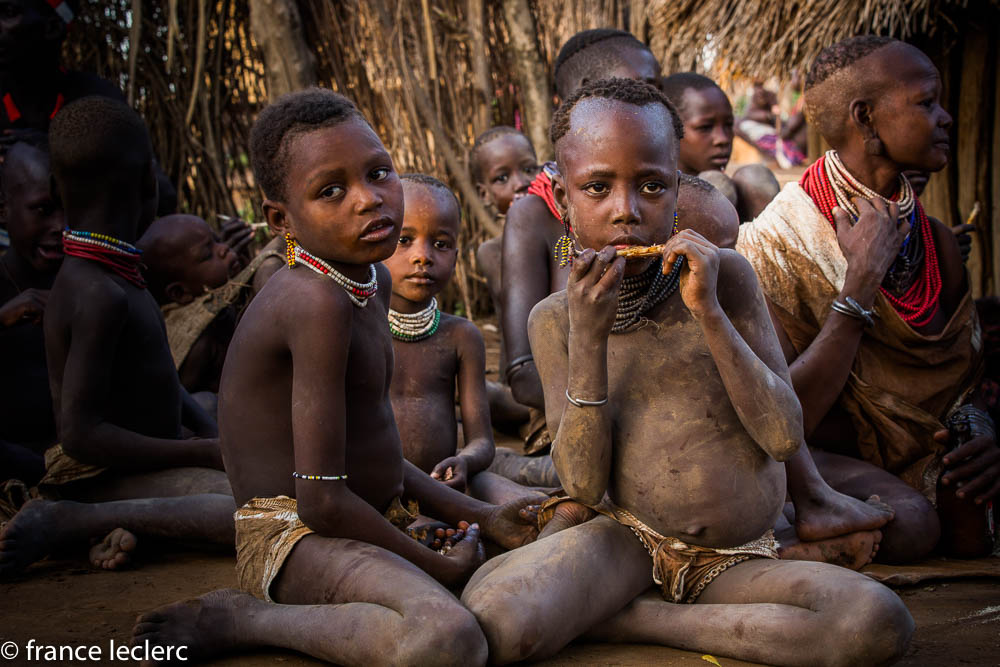 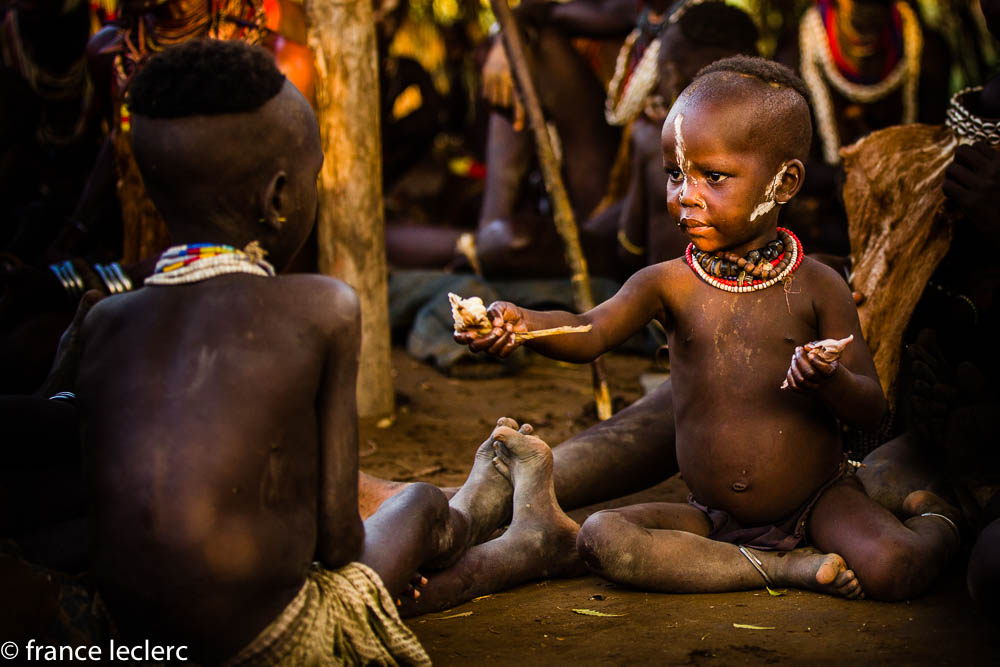 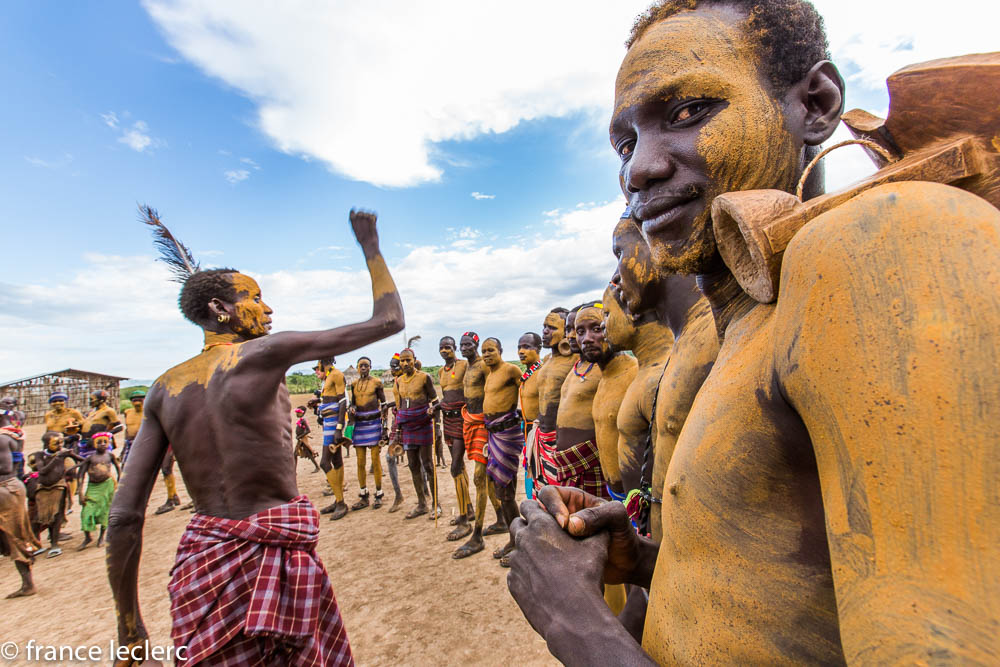 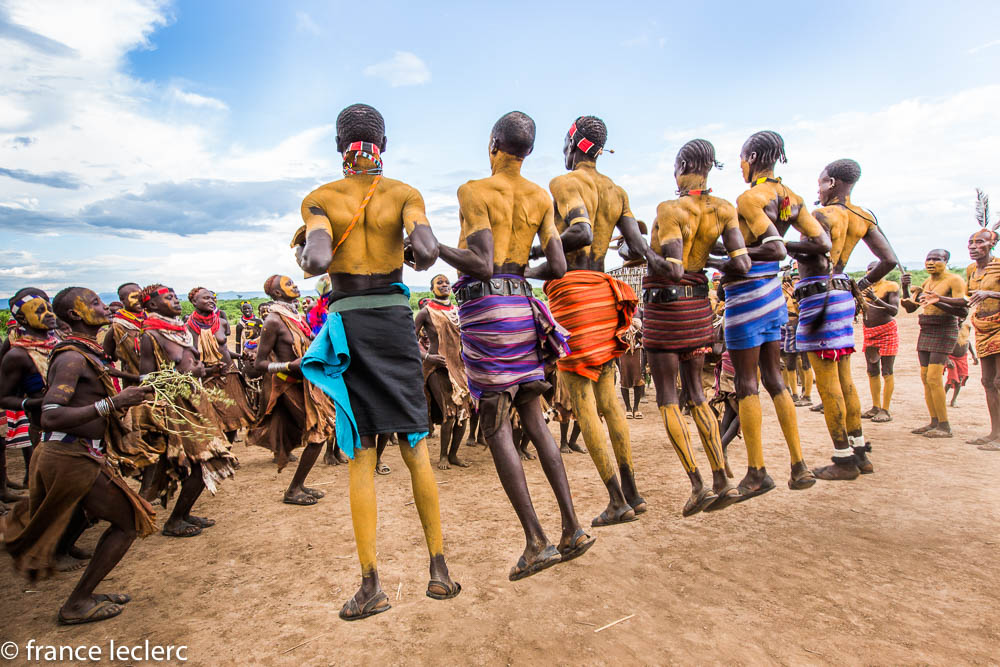 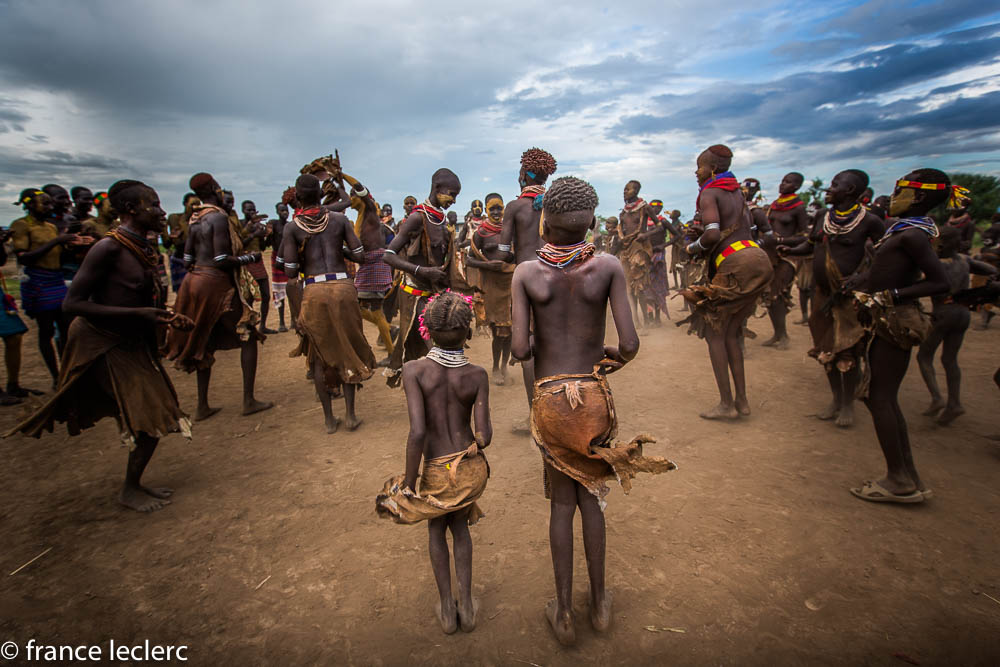 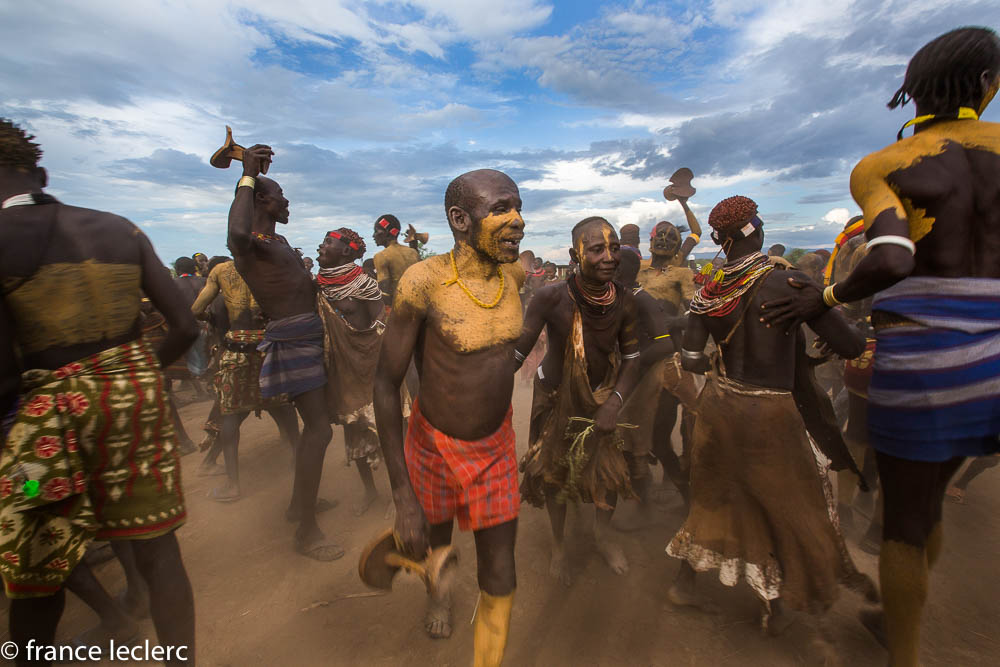 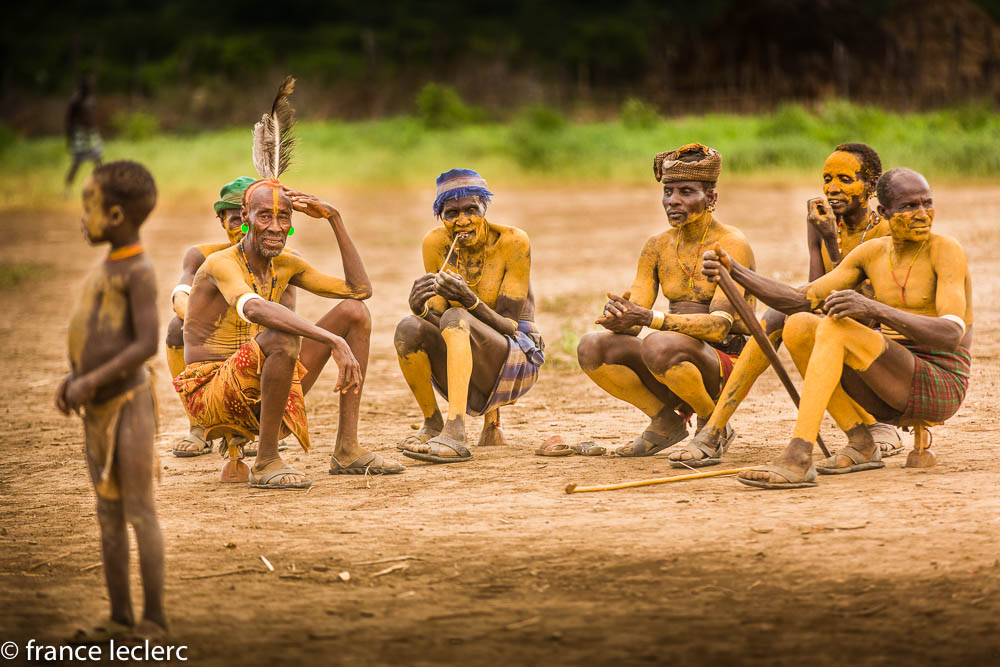 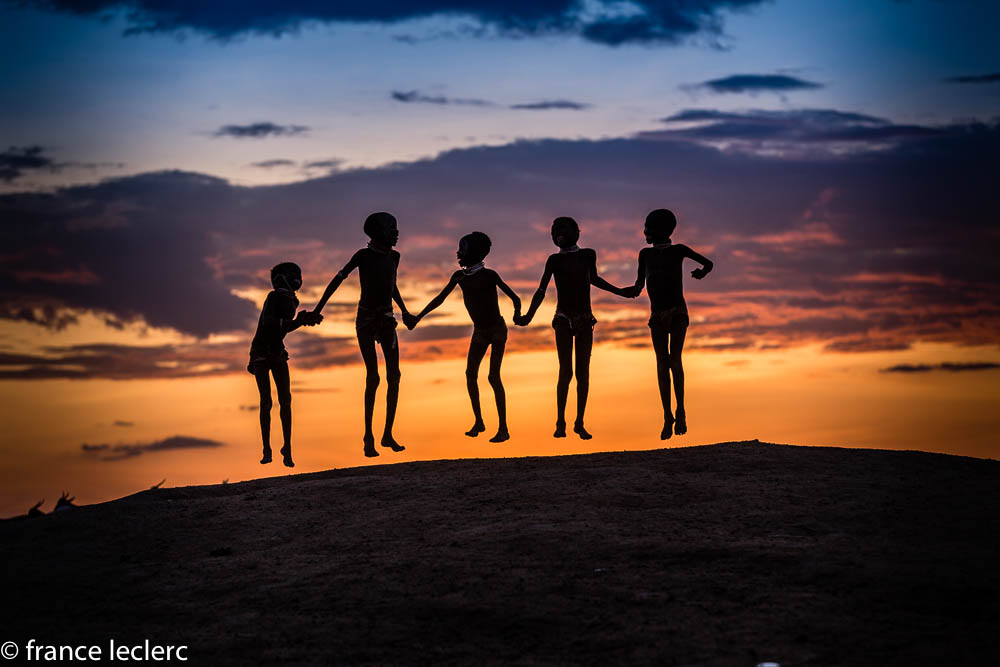